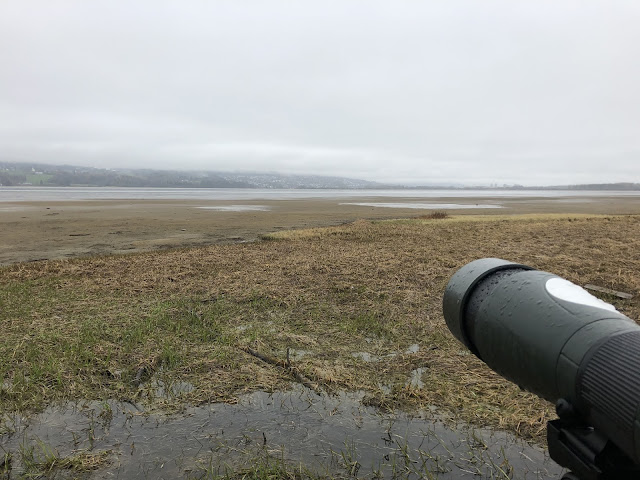 The rain continued today and will do so most of this week meaning potentially lots of good birding and good birds are turning up.

I got to visit Svellet this morning in rain and low cloud and it was cooking with birds. Waders were feeding, arriving, departing and sometimes just flying right over and all the time making a lot of noise. Two hours standing over the telescope left me freezing and with a sore back but I didn’t really realise until right at the end such was the excitement of witnessing the Svellet spectacle. It was difficult to count the birds but there were over 1000 waders with at least 400 each of Greenshank and Wood Sandpiper making up the vast majority. Around 45 Ruff including displaying males and 30 Redshank was a good count with this species for some reason never being that numerous here. 9 Spotted Redshank were also noteworthy. A flock of 13 Whimbrel came in calling and rested for less than a minute before continuing and they had a Bar-tailed Godwit in their midst. Bird of the day was a Dotterel. I heard it calling at first and it took a few moments before my brain fired into life and I was immediately, if briefly, transported to the mountains and I could put a name to the bird. I looked up and a flock of around 80 Golden Plovers were heading north and just off the end of the flock was a smaller bird which in the scope I could confirm was a Dotterel. Not a single calidris wader to see but they normally turn up a bit later than the tringas.

A couple of hundred Teal contained their American cousin who looks to be paired to a female now although which species she is is open to question. This year has been good for sightings of male Green-winged Teals in Norway and there are undoubtedly a number of females also knocking around out there.

Driving home I had a flock of at least 400 Golden Plover flying over so the da was clearly a big one for wader passage. It was therefore surprising that Maridalen yet again missed out on the show. I was there both before and after Svellet and just had 3 Greenshank and 2 Wood Sandpipers. I tried likely areas for Great Snipe but it may still be early for them this year.

Svellet is a difficult place to find rare waders as the distances involved are often too great to really grill the birds but one always tries. Last May I found a Lesser Yellowlegs but the chances of that happening this year are probably zero after what I assume to the same bird was found yesterday just west of  Oslo. It was found at a coastal site but flew off at high tide and was very impressively refound inland about 45km to north a bit later. It was still present there today and the same observer then went one better and found a Marsh Sandpiper nearby! The numbers of waders passing through these sites is a lot less than at Svellet but viewing conditions are much better meaning people even get pictures!

My Svellet eBird list is here but there are no pictures as the camera never left the bag.