Most of July was spent a usual at our cabin near Bodø in the north of Norway. Over the years I have found some good birds close to the cabin but this year had to be content with admiring a male Surf Scoter that had been found before I got there.

I finally felt like I cracked orchirds and went a long way to identifying the species that have always confused me plus finding many new species. I had some luck with butterflies although a specific trip to an alpine locality revealed only one of potentially 10 new and scarce species I had hoped to find.

Dragonflies took up a lot of my time in August back in Oslo and birding wise there was nothing too special to report. The end of the month is normally a good time for multiple (and close) sightings of Honey Buzzards in Maridalen but only a handful of records this year suggested a failed breeding season. Common Buzzards though clearly had a very good breeding season and could be seen in double digit groups. Bluethroats also showed up in good numbers at the month end.

There are usually two things that keep me occupied in September: Taiga Beans and Værøy. I was unable to visit Værøy this year after having had annual trips since 2012 and really missed it – both the birds and the birders. Instead of Værøy I had some trips into Oslo’s forests which resulted in my best ever views of Hazel Grouse along with Hawk and Pygmy Owl and Three-toed Woodpecker which I dubbed the Fabulous Four. Kingfishers also graced Maridalen – this species is benefitting from a string of mild winters – as did a male Grey-headed Woodpecker. 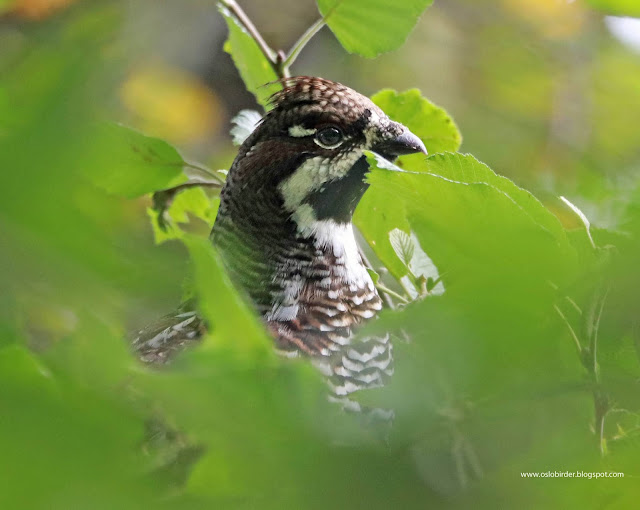 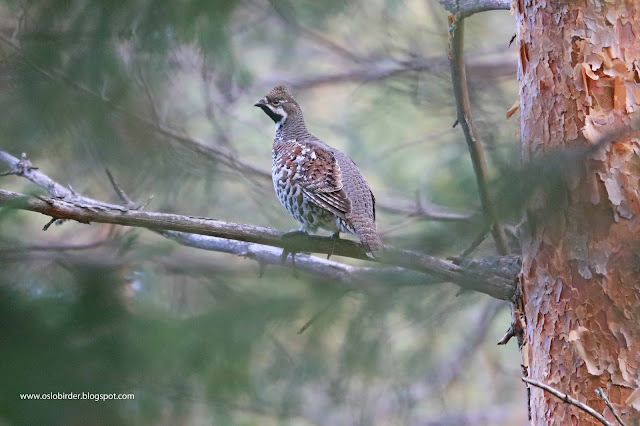 October is the month for really rare birds to turn up and for me this meant being able to twitch a Red-flanked Bluetail at Fornebu. This was a county first and made up in a small way for not being able to go to Værøy. Otherwise, the month was dominated by owls. Rodent numbers are suddenly very high around Oslo and Hawk Owls that turned up in September hung around showing there was ample food. Pygmy Owls were also appearing after being absent for a couple of years and ringers further north were catching fair numbers of Tengmalm’s Owls. This prompted Per Christian and I to try to lure our own Tengmalms and we had a fantastic session one evening where we brought in two Tengmalm’s and saw one incredibly well. We also had Hawk and Tawny Owl and the next morning I had Pygmy in the same area so it was owltastic.

Things got even better on the owl front when I discovered a daytime roosting Tengmalm’s at Fornebu which is the first time ever I have done so. Bearded Tits also brightened up Fornebu after being absent last year and a boat trip with Halvard gave a locally rare Black Guillemot. Soon after this there was a large influx of auks into the inner Oslofjord resulting in close encounters with the three commoner species. 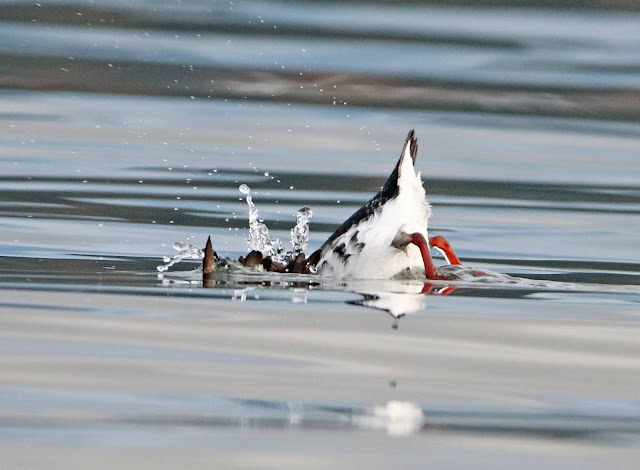 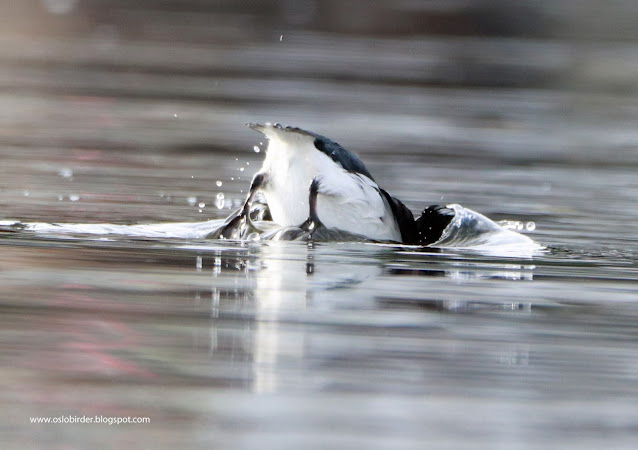 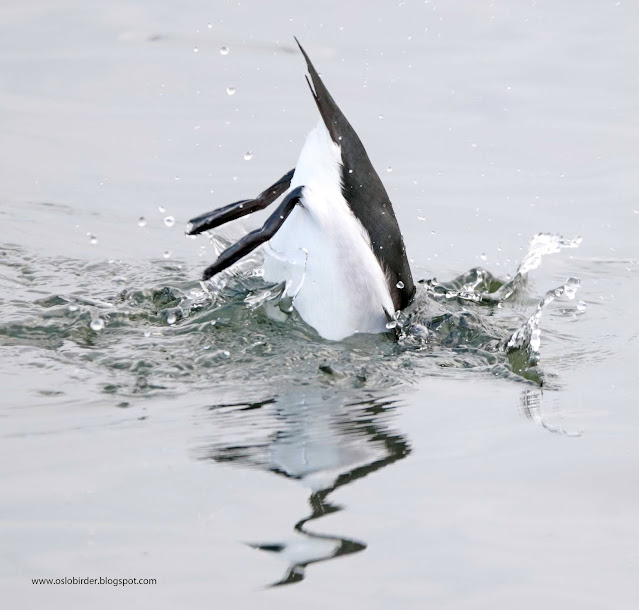 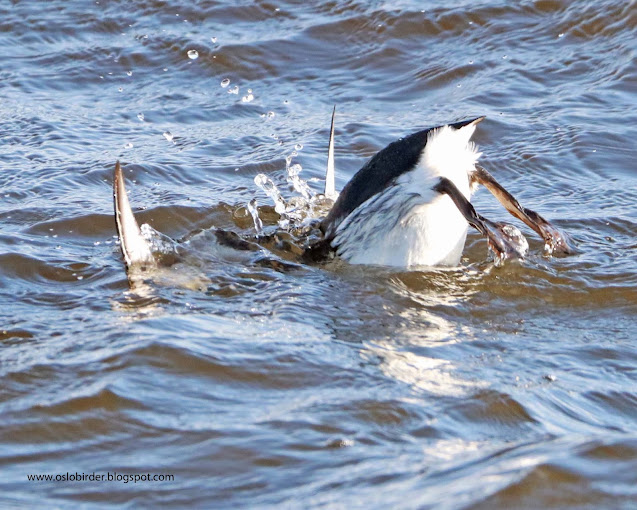 November mainly involved trying to get better photos of long staying birds such as Hawk Owl and Bearded Tit and Hazel Grouse plus searching for the Grey-headed Woodpecker which was still in Maridalen. 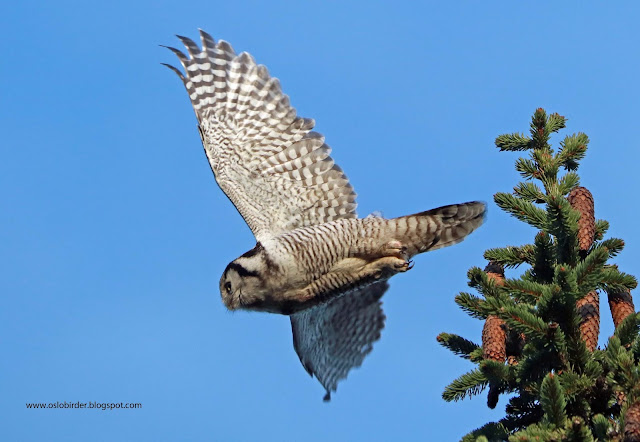 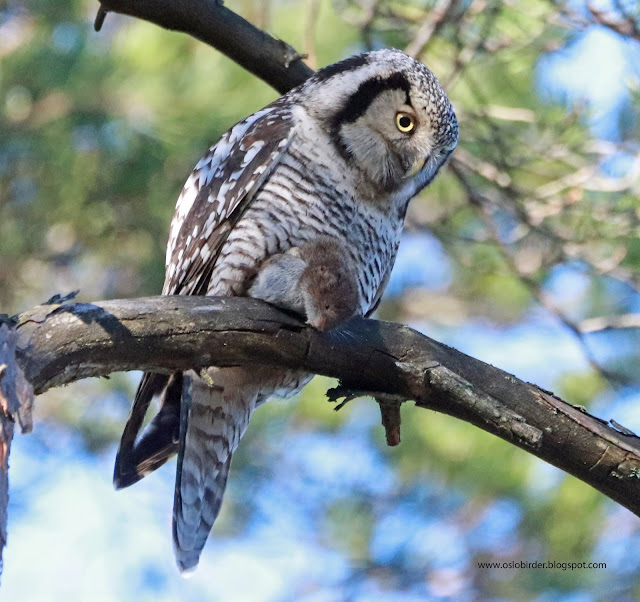 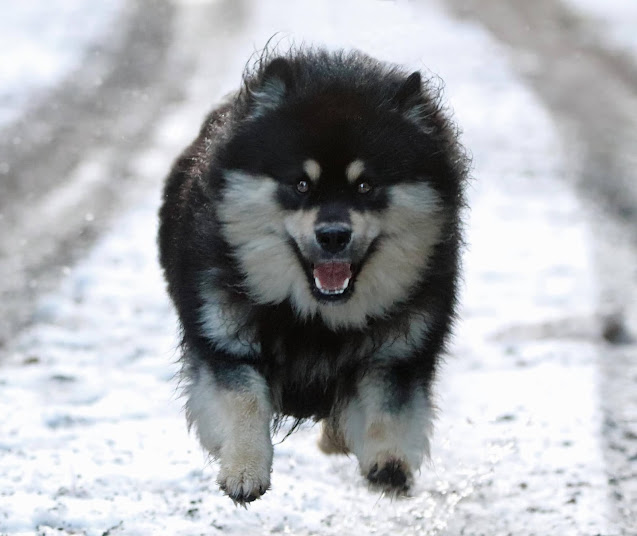 December was a quiet month with the forests almost devoid of birds which was in stark contrast to last winter when the abundant crops of berries and seeds made the forests alive with birds. Two Hawk Owls, 3-4 Common Buzzards and the odd Great Grey Shrike in Maridalen were almost the commonest species in the Dale. Common Buzzard has never over wintered in Maridalen before so for at least three birds to be attempting it was quite sensational and proof of the abundant rodent population and probably also the mild weather.

2020 will of course go down in the history books as the year the Corona crisis knocked out an entire planet. From the end of March onwards the travel and other social restrictions imposed all over the world meant that tourists could for all intents and purposes not travel to Norway unless they were prepared go into 10 days quarantine. It also impacted on the travel I could do within Norway but did result in more people using the countryside (for good and bad) as indoor activities were no longer available.

I started using eBird after my patience and trust in the Norwegian Artsdatabank (and NOF) and its reporting system Artsobservasjoner finally ran out. EBird and its easy to use reporting app have made my life a lot easier and I feel that my observations are contributing to improve global knowledge.

Birding wise I had three Norwegian ticks: Lesser Yellowlegs which I found, Ferruginous Duck which was very nice but probably plastic and a Rufous tailed Bushchat which was a second for Norway and which fate conspired to allow me to identify from the pictures the finder had taken and then to refind it.

I was unable to travel to Værøy in September which was a big disappointment but two of its classic birds decided to come to me with twitchable Yellow-browed Warbler and Red-flanked Bluetail just a short drive from home.

Hawkie on tap in Maridalen meant the birding year ended on a high.

Both birding wise and guiding wise I had a great start to 2020. My, and Oslo’s, “Taiga Trio” of Great Grey Owl, Hawk Owl and Pine Grosbeak proved very popular with day tripping British birders. With these fantastic birds on my doorstep I didn’t have the inclination or the time to do much other winter birding but did see a showy Glaucous Gull.

I was able to read the ring of one of the many Grozzas I saw which showed it to have been ringed in southern Sweden at the end of October.

February started where January had left off with lots of guiding for the Taiga Trio. Some Purple Sandpipers gave a nice change on a sunny day and at the end of the month I guided up into the real taiga in Hedmark where Siberian Jay and Two-barred Crossbills were highlights. 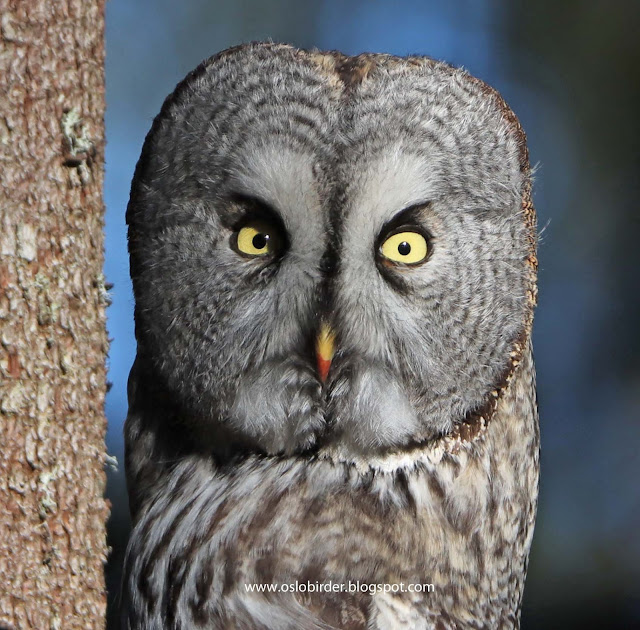 The Taiga Trio ceased to be at the end of Feb and only Great Grey Owls hung around into March but they too disappeared in the middle of the month. March heralds the start of spring migration though so there was suddenly lots more to see. The Taiga Bean Geese were as always a highlight and I paid them a few visits. An inland 1st winter White-billed Diver at the start of the month showed really well and at the end of the month there was a heavy passage of Pink-footed Geese and I had in excess of 10,000 birds over Maridalen on the 31st. 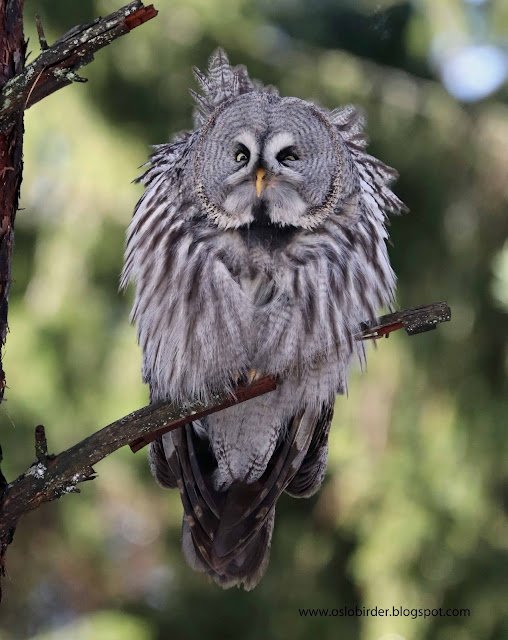 Three-toed Woodpeckers were a big part of the month and they seemed at times to be everywhere in Maridalen. On one memorable occasion I had two pairs fighting over territory and they were so obliging to line themselves up on the same tree trunk to be photographed.

Most beautiful bird of the month was undoubtedly the Oslofjord male King Eider, aka Elvis, that normally can only be seen by boat but for one day, and one day only, popped up at a beach at Fornebu.

In May I split my focus between my patch of Maridalen and the vast Nordre Øyeren wetland with especially the area called Svellet getting attention early in the month when it is a mecca for waders. Svellet can hold thousands of waders (primarily Greenshank and Wood Sandpiper) but due to long distances and often heat haze it can be very challenging identifying smaller waders. I have found Broad-billed Sandpiper but never anything rarer but that all changed on May 4 when the force was obviously with me and I finally managed to put a name to a bird that I had also seen the previous two days but at too long range to ID it. I had found Oslo and Akershus’s first Lesser Yellowlegs! It was also a Norwegian tick for me and many of those who came to see it.

Only three days later I twitched my second new Norwegian bird of the year; a smart male Ferruginous Duck that had probably jumped a fence but with no rings will be accepted as wild.

An equally smart duck was a male Smew that could also perhaps have been an escape but more likely thought it was a Goldeneye (happens probably because a female Smew had laid some of her eggs in a Goldeneye nest hole) and had taken an eye to a female Goldeneye who was hanging around in a surbuban setting close to Oslo.

At the end of the month there was quite a bit of action in Maridalen with breeding Tawny Owls, Wryneck, Red-backed Shrike and Three-toed Woodpecker.

At the very end of the month a long weekend in the mountains at Beitostølen was just fantastic. Species such as Ptarmigan, Dotterel, Temminck’s Stint, Shore Lark, Bluethroat and Short-eared Owl obliged but it was all topped off by my best visit ever to “my” Great Snipe lek. I had birds lekking so early in the evening that the lek site was still bathed in sunshine and it was so early in the season that the birds were extremely active. Even better Mrs OB joined me for the first time and did, I think, finally understand a bit of the excitement of birding….

June is a month when dragonflies and butterflies start competing with birds for my attention but thus year the birds did their best to keep me interested.

River, Grasshopper and Blyth’s Reed Warblers showed well, Corncrakes, Nightjar and Firecrest sang, Long-eared and Tengmalm’s Owls had young and a Little Gull graced Maridalen.  But there was one bird that stole the show. On 11 June I decided to visit Årnestangen with the hope of seeing Black Tern. As I walked out I met Edna Mosand who casually mentioned a bird she had seen and photographed but was struggling to ID. I looked at a couple of the pictures on the back of the camera without being any wiser but it was clearly something good. I hurried on to where it was seen with my mind working double speed and then finally worked it out. A quick call to Edna to find out if she had a photo showing the tail and its ID was confirmed – a Rufous Bush Robin!! I assumed at the time it was a first for Norway but was actually the second record. I now had to refind it but due to a misunderstanding as to where it was it ended up taking nearly another two hours but finally there it was!

Dragonfly wise had two highlights. A male Broad-bodied Chaser was a long awaited species and with its Cambridge Blue coloured body also very smart and Green-eyed Hook-tailed Dragonflies. I had seen this species once before in the beak of a Yellowhammer and had decided that I would work hard to find them this year at the one site in Oslo where the species is known to occur and it was a bonus to see them emerging from the larval form.