I had to leave Værøy today but cannot wait to return. Even though the major rarity did not turn up the birding was always quality, the company outstanding, every day brought surprises and there was always a feeling that there was a good bird around every corner.

My birding this morning was restricted to just one hour as I had to be at Helipad at 0845. There was no evidence of any new arrivals and I had to content myself with a Lesser Whitethroat, 2 Blackcaps, a couple of Snow Buntings and a Great Spotted Woodpecker searching for food on a house wall.
The helicopter flies quite low over the sea and two birds that flew up from the sea as we flew over were unmistakeably White-billed Divers (gulnebblom).

Today was a day for finally getting to grips with two species that I have stuggled with. The first, Two-barred Crossbill (båndkorsnebb) has totally avoided me until today despite there being a flock of 4 on the island, and the other was Olive-backed Pipit (sibirpiplerke) which finally allowed itself to be pinned down, admired and photographed.

We awoke to an overnight frost, clear skies and just a light north easterly wind. These conditions were clearly not conducive to new arrivals and my morning walk around Nordland was only enlivened by very close views of the resident Hawk Owl which unfortunately looked as though it is poorly – probably due to lack of food. Warblers were in short supply with 2 Chiffchaff (gransanger), 1 Yellow-browed (gulbryn) and singles of Blackcap (munk) and Garden Warbler (hagesanger).

Heading south did not result in an increase in bird numbers but the lack of wind made viewing conditions good and allowed us to locate what was there. I found a Red-breasted Flycatcher close to where we had the male 2 days ago. It was very skulky and we saw it briefly but I did see it well enough to be sure it lacked a red throat and was therefore a new bird. When the others found a red throated male in the same garden later in the day I had to work hard to convince the others on the the two bird theory!

The plantation was nearly completely devoid of birds but another Hawk Owl here was clearly trying to hunt birds although we didn’t see it have any luck.

A call from Kjell led me to the church where I was able to absorb myself in an adult male and three juvenile Two-barred Crossbills feeding on rowan berries and spruce cones seemingly oblivious to our presence. They were quite vocal, mostly with a call very similar to Common Crossbill but one bird also gave the trumpet call.

Kjell had also had a pipit earlier in the day that he couldn’t quite decide (due to bad views) whether it was Tree or Olive-backed. I headed to the area which was an area of long grass with some bushes. I played the call of Olive-backed and got an immediate response from within the grass. I called the others and we then went into the area and the bird flew up into nearby bushes. We were able to confirm it was an OBP but it was a poorly marked specimen. It obviously favoured the area and every time we flushed it from the long grass (where it was invisible) it would either fly just a short distance and drop down again or every now and again fly up into bushed which eventually allowed some decent pictures to be taken. I also glimpsed it walking in long grass at the base of a tree where it looked almost like a rodent as it lifted its long legs over clumps of grass.

Whilst looking for the pipit a Jack Snipe (kvartbekkasin) flew up from my feet nearly giving me a heart attack.

Singles of House Martin (taksvale) and Swallow (låvesvale) were new in and enjoyed the warm weather. The day ended with a count of around 10 Yellow-browed Warblers (5 for me) which feels very few but would be a count nearly any other place in Europe would be pleased with!
Due to me having taken far too many pictures and my hard disk being full I haven’t had a real chance to look at all the pictures I took today, so here is a selection and I may have to have another post later once I’ve had a chance to go through everything properly. 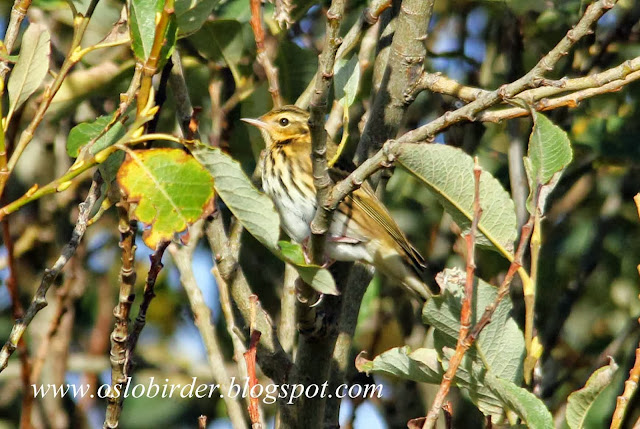 Today was a quiet day and after many, many kilometres of mostly uneventful trudging around the island I am ready for a beer and an early night.

Clear skies meant that even more birds left the island overnight and despite easterly winds there was little evidence of new arrivals. That doesn’t mean that there wasn’t quality to be seen though. I had two Olive-backed Pipits (sibirpiplerke) but true to form, with me at least, there were no photos and I had to rely on flight views and calls to ID them. They had flown over me calling and I found them calling in a mature garden a couple of hundred metres away but my views were restricted to them exploding out of a spruce tree at 15m range.

Yellow-browed Warblers (gulbrynsanger) were a lot scarcer today and were for the first time outnumbered by Chiffchaffs (gransanger). I ended up with 7 Yellow-broweds and 11 Chiffchaff. I had three Lesser Whitethroats (møller) one of which had me going for a bit as I only heard it calling first and couldn’t quite place the call until the bird showed itself.

Highlight of the day was a Long-eared Owl (hornugle) perched in exactly the same group of bushes as yesterday’s Tengmalm’s Owls. Unfortunately this bird wasn’t quite as confiding and flushed before rapidly gaining height and disappearing over the nearby hillside.

A Treecreeper (trekryper) was possibly an island first and a few flocks of Pink-footed Geese (kortnebbgås)  flew over in v –formation calling.

Let us hope that tomorrow brings the big rarity as I am off early on Friday morning.

Things started slowly as we checked the area around Nordland where we are staying and it was immediately apparent that many birds had moved on as there was hardly a Yellow-browed Warbler to be heard (or seen for that matter). This was a bit disappointing as the winds were from the east and there had been some rain just before dawn. However as it turned out some new birds had arrived even though a lot of other had left.

I was also very lucky today as I hardly missed anything but best of all I was also the finder of three of the days best birds: the Bluetail, Dick’s Pipit and R-b Fly.

I didn’t manage to get that many good photos today except for of the Tengmalm’s Owls. Kjell Mjølsnes texted to say he had found one but by the time I got there he had found two. They were ridiculously confiding as they roosted in small trees and the only problem we had initially was with the light as bright sunlight was illuminating one side of the most confiding bird. I tried using flash but that gave red-eye! Later though one bird moved and gave fantastic photos opportunities. I also discovered the remains of a bird (one leg and some feathers) in the branches right by one of the owls which turned out to be a Snow Bunting (snøspurv) and which most likely had been eaten by the owl.
Here are the best of photos that I’ve managed to look at so far but I took a couple of hundred of the owl plus some video so there will be probably be a separate post later in the autumn. 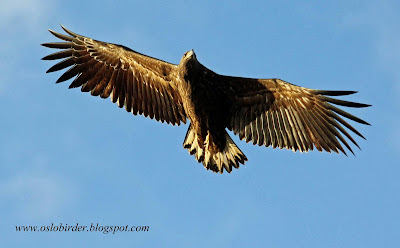 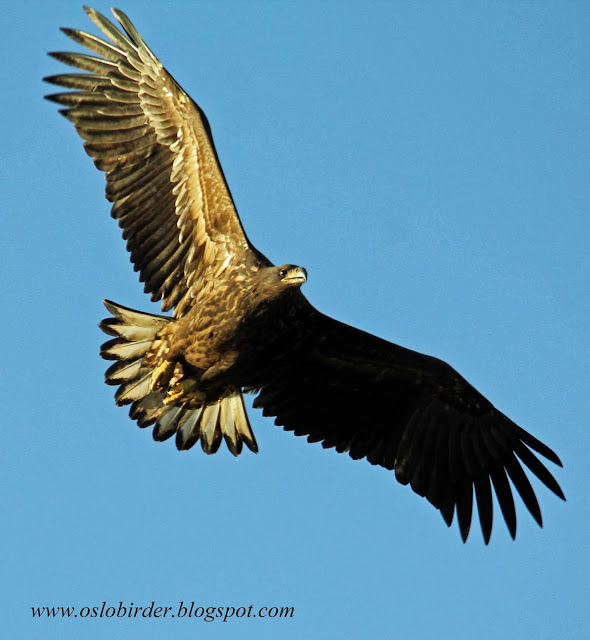 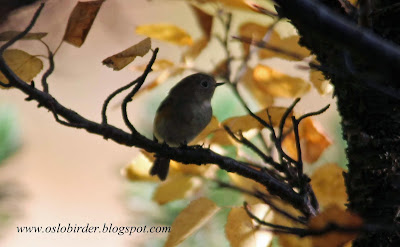 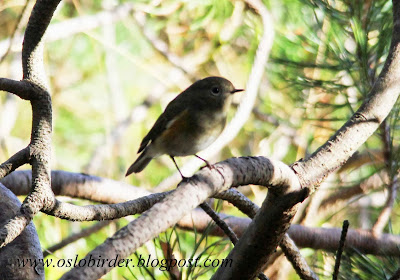