OK, so I might not be seeing be seeing many wingbars or “megas” at the moment but one of the joys of birding is that the idea of rarity is a relative thing. A rare bird in Norway will be a common bird somewhere else and what gets us excited all depends on the geographical boundaries we are operating in. So, a Cape May Warbler will be common in certain parts of the US (although apparently not in Cape May where it really is a mega) whilst it causes people to travel overnight in Norway.

The Azores islands are in the middle of the Atlantic and could equally be included in the Americas or Western Palearctic. They have ended up being included in WP and this drives many European birders to travel there every autumn to see the American birds that regularly turn up. It would be cheaper and easier to travel to the east coast of the USA and see the same birds but then they wouldn’t have the same relative rarity value that is all decided by the geographical area one has chosen. Those who have a local patch can get very excited about birds that are just common a few kilometers away  - I for example would throw a party if I saw a House Sparrow in Maridalen but wouldn’t bat an eye lid if I saw one in my garden just 5 minutes drive away.

Today, I had one of those relative days. Whilst bemoaning that I am stuck in Oslo and closely following the antics of people on Værøy, Røst or Utsira there is always something to find out there. A dog and family walk in Maridalen started off very quietly. It was a wonderful autumn day with no wind and great colours on the trees but there were hardly any birds either. As we sat down for some refueling I heard what I was sure was a Grey-headed Woodpecker calling from the otherside of a bay on the lake. This is a species I see barely annually (although occurs over most of Norway) and have seen just twice before in Maridalen so this was a big thing. After a bit of waiting and some encouragement if flew across the bay and landed in the trees behind where we were sitting and carried on calling. Mrs. OB and Jr Jr couldn’t quite work out was the fuss was about but I filled my boots for as long as it lasted.

Another interesting sighting was of an injured juvenile Whooper Swan on the lake. This will be missing youngster who clearly isn’t dead as I assumed but its drooping wings testify that it cannot fly and has been abandoned by the family. I have no idea what has caused the injury but my best guess would be flying into the wires over the bridge at Dausjøelva which one of its parents also did last spring. It is perhaps surprising that they have already abandoned one of their young but the ability to fly is key for a migratory species that will head south in a few weeks. Many large species lay few eggs and put a lot of effort into raising maybe only one youngster every other year but the fact that Whooper Swans lay 8 eggs suggests that they expect to lose many along the way. 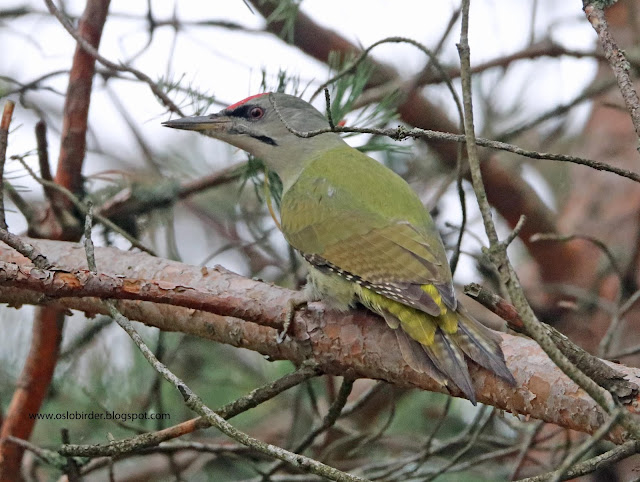 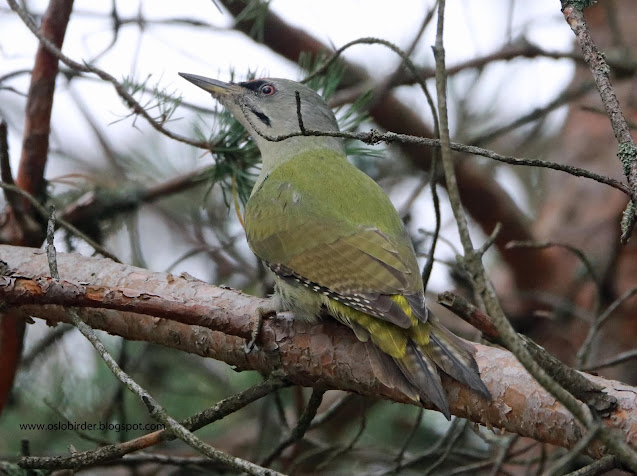 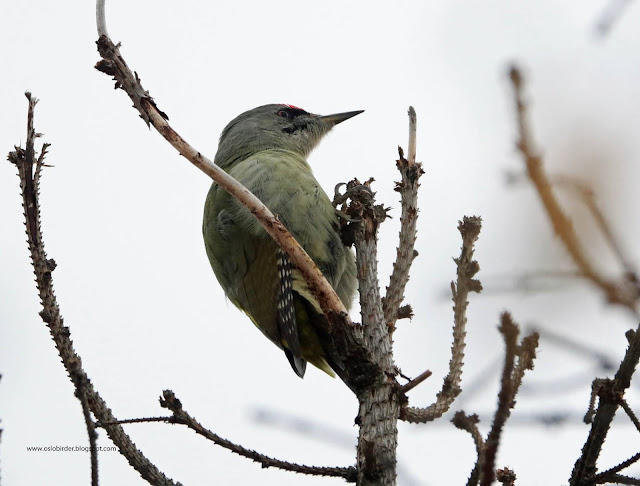 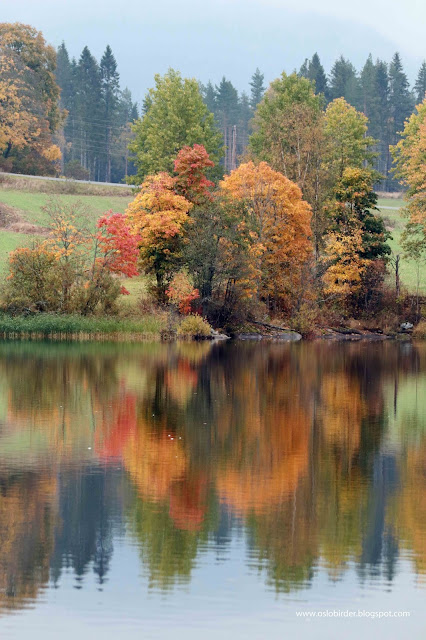 It’s difficult to find something new to blog about when you can’t beat the previous post and you are also a tad depressed that you are stuck in Oslo when things are kicking off on Værøy and the neighbouring island of Røst. Over the last few Days Værøy has had White’s Thrush and 2 Red-flanked Bluetails while Røst has had Brown Shrike, Pechora Pipit and a Bonelli’s Warbler (they are not sure if it is Eastern or Western).

I have been out with the Beast and Mrs.OB on long walks hoping to perhaps hear a Y-b Warbler but instead being happy if there is a Chiffchaff out there. My sightings of Pygmy and Hawk Owl, lots of rodents tracks and numbers of bird trapped and ringed further north has left me convinced that there are loads of Tengmalm’s Owls in the forests around Oslo. I have dreamed about bumping into one as I walk around the forest (but hardly anyone EVER does that in Norway) so last night I tried to see if I could use the ringers trick. I found what I thought would be a suitable site in Maridalen and played the song of Tengmalm’s for an hour. It was a very enjoyable hour with the calls of migrating Redwings and Song Thrushes overhead and a Tawny Owl did respond to the Tengmalm’s playback and first called before then appearing close to me and staring long and hard at me before moving off. But the target bird did not appear. I haven’t given up on finding Tengmalm’s and will probably try to walk further into the forest and try in the areas where the Pygmy and Hawk Owl are.

In Maridalen there is some bad news with the Whooper Swan family reduced to 7 young. One youngster has therefore disappeared after the parents had doen the hard work and got it to the flying stage. It will not have flown off on its own accord so is going to be lyying dead somewhere. I find it difficult to believe that a fox is the culprit so it has either flown into an overhead wire or been illegally shot which given that the hunting season has just begun might make sense.

Today a Beast walk at Fornebu revealed a Kingfisher but little else except drizzle.

In this video it can be heard alarm calling. This call sounds very much like Great Spotted Woodpecker and is a call I have heard very rarely

Just minutes after I posted last (and predicted a new yank would be found) a Black & White Warbler was found on the west coast. Two firsts for Norway on the same day will probably not be repeated again! The BWW was found in the field and was an awesome bit of a birding. The finder, Sigmar Lode, got some good pictures and then a twitch ensued with people who had been on their way to Utsira rerouting (and avoiding having to take a ferry) and converging on the woodland where the BWW had been seen. I understood that nobody else had seen it and there are definitely no photos other than from the finder but a number of listers have subsequently and without any fanfare added it to their lists. A number of other birders saw a Coal Tit….
The Cape May Warbler though has hung around and is still present today allowing it to be twitched.
All this has happened over 7 hours drive away and there is little chance of a yank turning up around Oslo although birds do do amazing things.
Yesterday, and for the first time this autumn we had strong winds from the south and I decided to sea gaze. There was a lot of rain aswell and I frequently had to retreat to the car but I did get some proper seabirds for my troubles. There was never going to be a lot to see on the sea as the southerly winds had developed too quickly but 6 Fulmar and 2 Kittiwakes was something to get excited about. The Fulmars were really enjoying the wind and arching high up in the air before disappearing into the waves.
Today was windless and felt like a good day to take the Beast for a long walk in the forest and that proved to be an exceedingly good choice! Hawk Owl, Pygmy Owl, Hazel Grouse and Three-toed Woodpecker all allowed themselves to be admired and admired well. At one stage I could hear (although not see) the last three species all at the same time. These four fabulous species are great for guiding but with 10 days quarantine for people arriving from overseas there is not likely to be anyone rushing over for a while….
There were also finally some finches although they were all heard flying over rather than being seen. Singles of Crossbill and Bullfinch were my first records for a while. 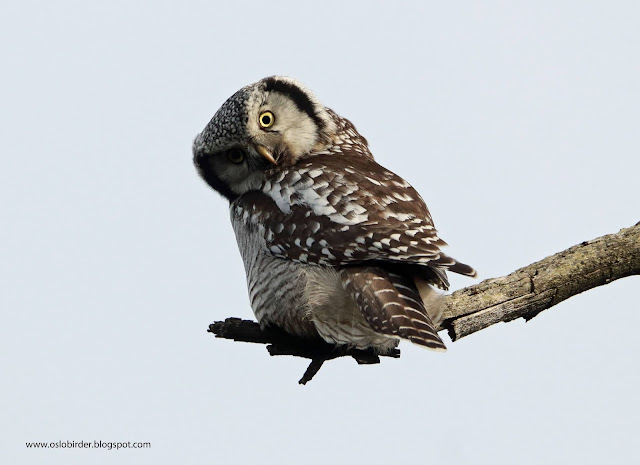 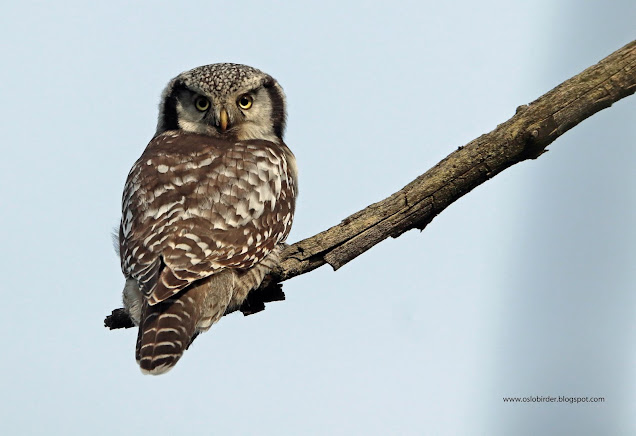 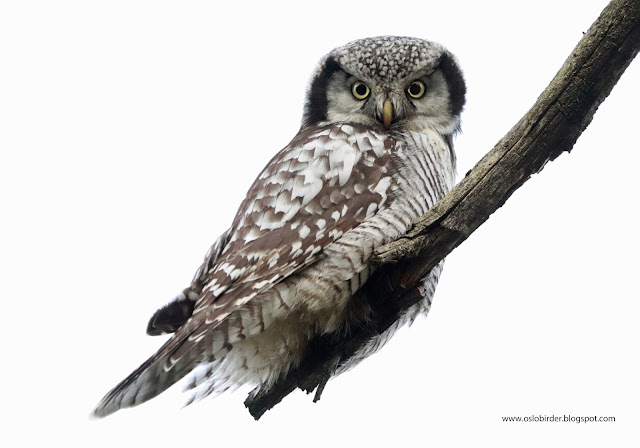 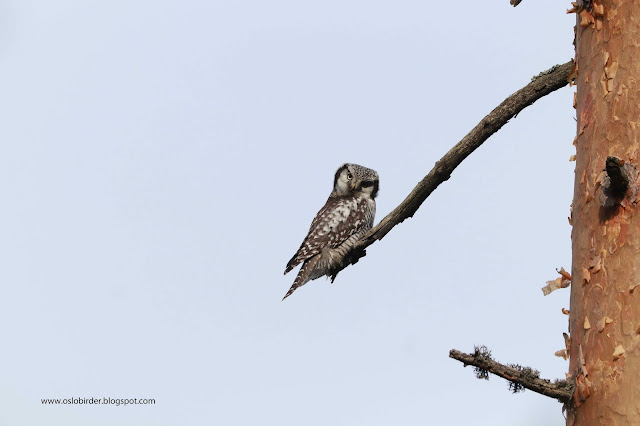 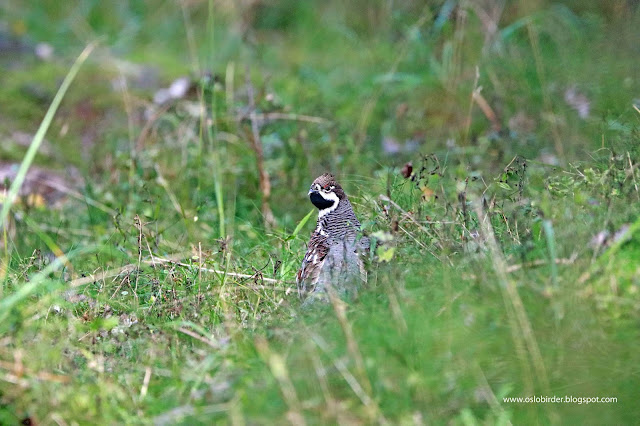 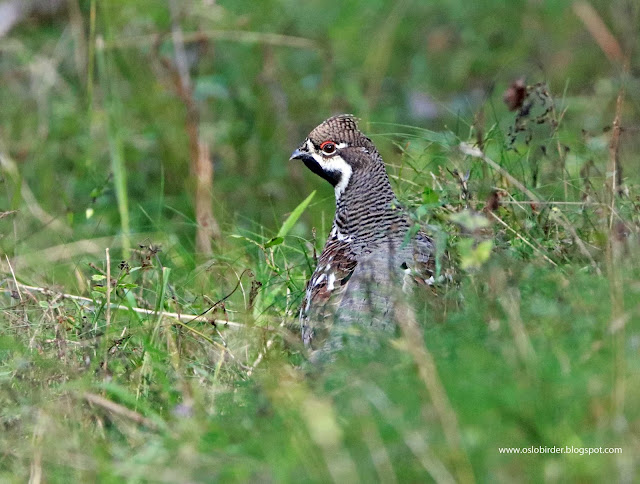 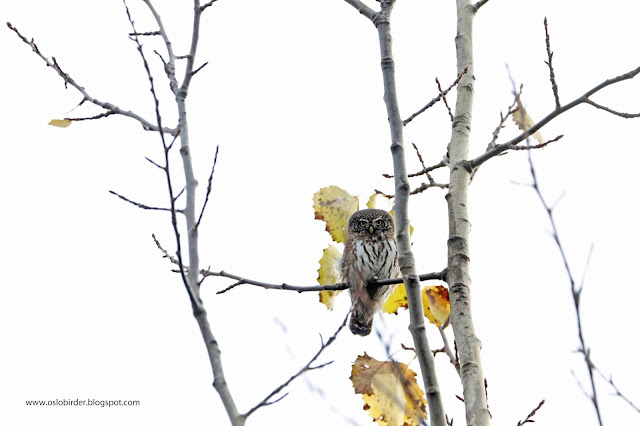 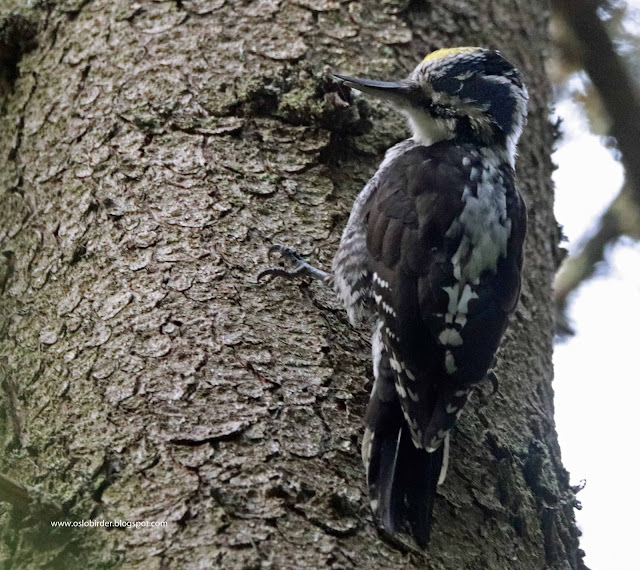 Some videos:
The Pygmy Owl taken with the iphone
and a video of two badger that I ran into last night
Lagt inn av rixy kl. 19:54 No comments:

After a slow start to the autumn birding scene in Norway things really kicked off today when a Cape May Warbler was pulled out of a net on the famous island of Utsira – this is a first for Norway and I believe only the fourth in the WP. With the winds dying down after westerly storms have pounded the coast of Norway it won’t be a surprise if more Yanks are uncovered. The forecast for the coming week is for easterlies so there should also get a good arrival of sibes. I won’t be able to get to Værøy but maybe I can find something good locally.

Yesterday I did decide to leave the forests of Oslo and head south east to Hellesjøvannet and then worked my way back via Nordre Øyeren. This proved to be a good choice and I had a number of good species. Hellesjøvannet gave me my first Great Grey Shrike of the autumn plus a flock of 36 Pochard (this species is surprisingly scarce in Norway and Hellesjøvannet is the best place for the species in the country). I also got to hear and then see at least 4 Bearded Tits – the species bred here for the first time in 2019 and if we have some more mild winters could become a regular fixture.

Buzzards were very visible over the stubble fields but I had no harriers and only a couple of Kestrels. I was hoping for Rough-legged Buzzard and did eventually find one which gave my probably best ever views of the species. It was a juvenile and I saw it first on the deck in a stubble field where it clearly had something in its claws. Two Ravens then gave it grief before it flew up with a mouse in its beak. The Ravens pursued it and the mouse was transferred to its claws before it flew away and evaded the Ravens. It turned up again not too long later and I was able to view it hunting whilst I used the car as a hide and sometimes it was too close for the 600mm lens. I also saw it sparring with Common Buzzards, had another one in the distance and a male Kestrel that caught a vole so it was all good but a Hen or Pallid Harrier would have topped it off.

Skylarks and Meadow Pipits were numerous on the fields and the presence of so many Skylarks reminded me of how I haven’t noted this species in Maridalen since the early summer. There were many singing males in Maridalen in May and there must have been breeding but during the course of July they all just seem to have vanished.

I checked out the Svellet area of Nordre Øyeren and did finally see a harrier with a juvenile Marsh showing well. A pair of White-tailed Eagles were eating something, probably a goose and looked very majestic. There were lots of geese during the day but I found nothing unusual amongst the hordes of Greylags and Barnacles.

I took so many pictures of the Rough-legged Buzzard and have struggled to choose the best ones to bare with me... 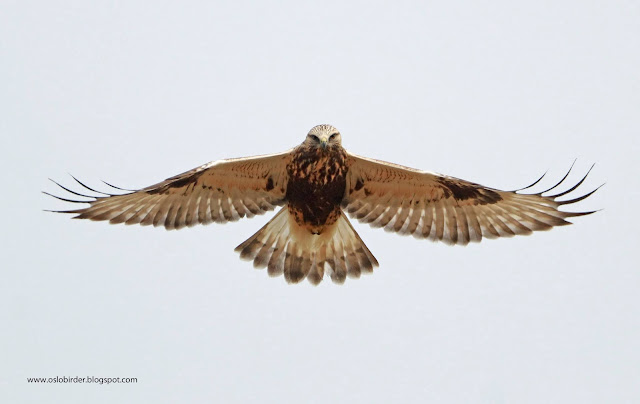 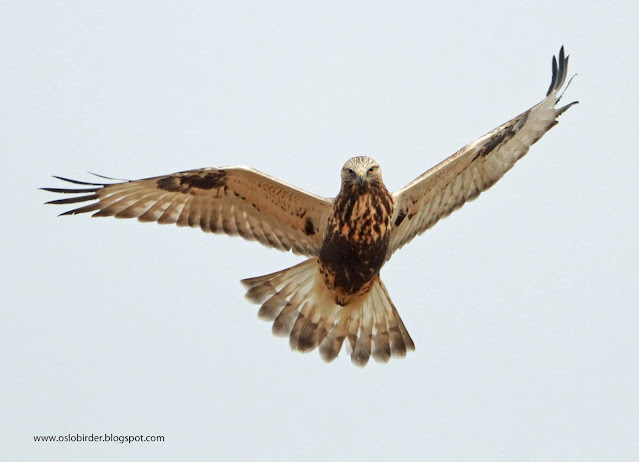 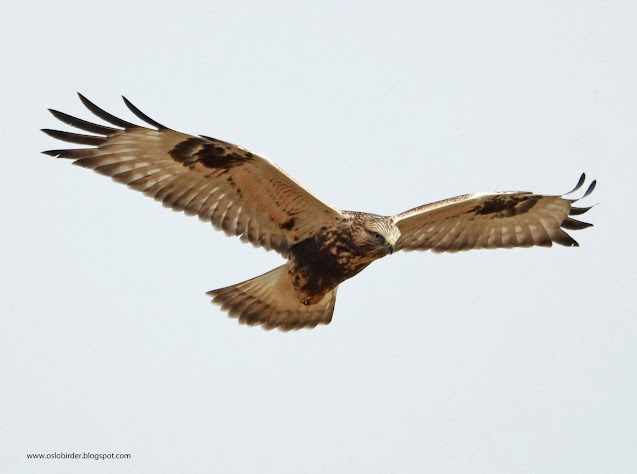 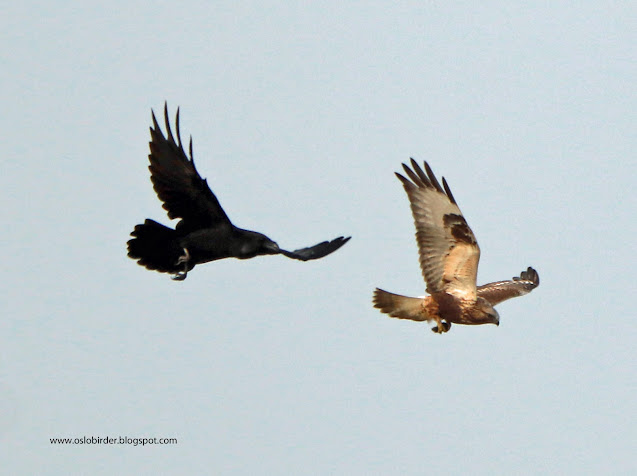 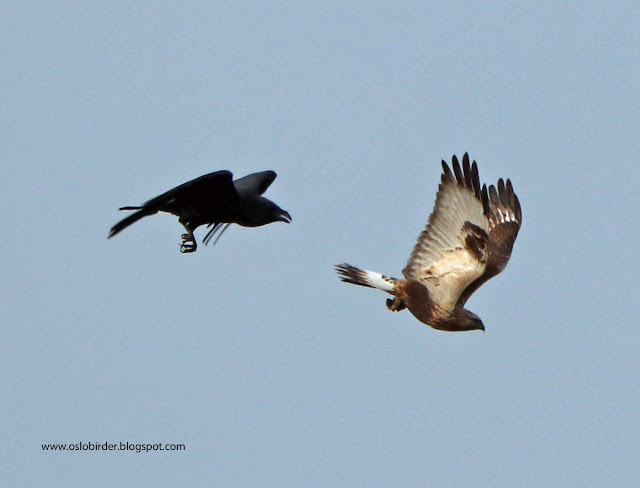 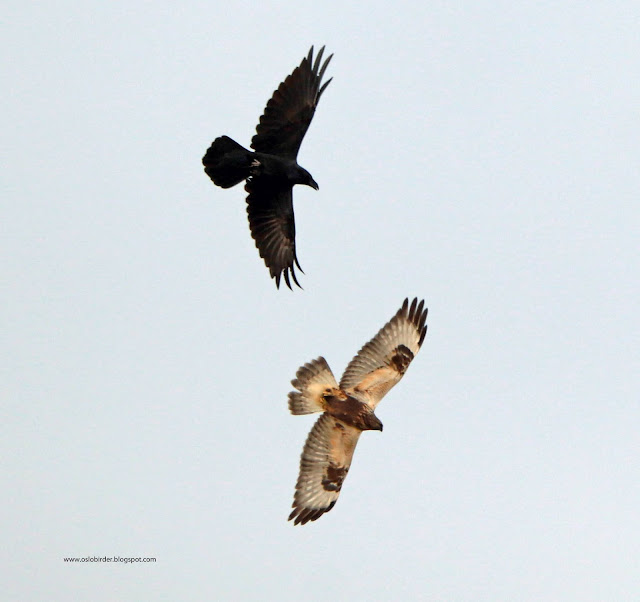 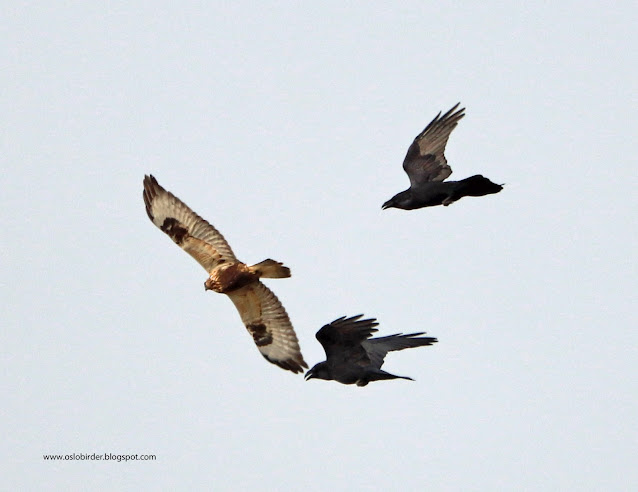 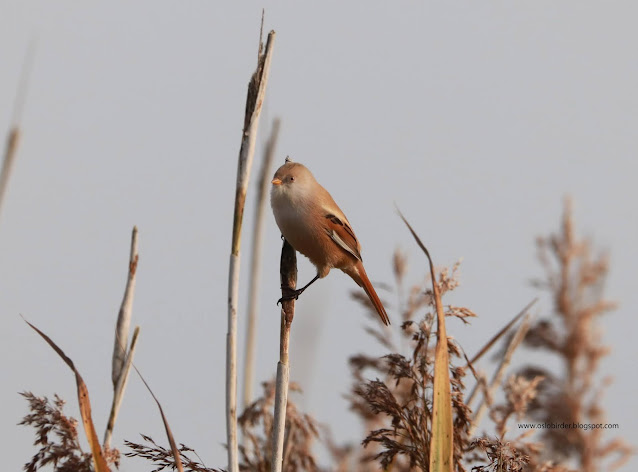 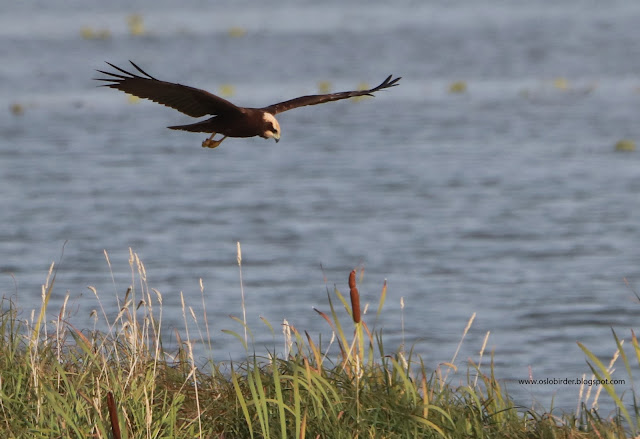 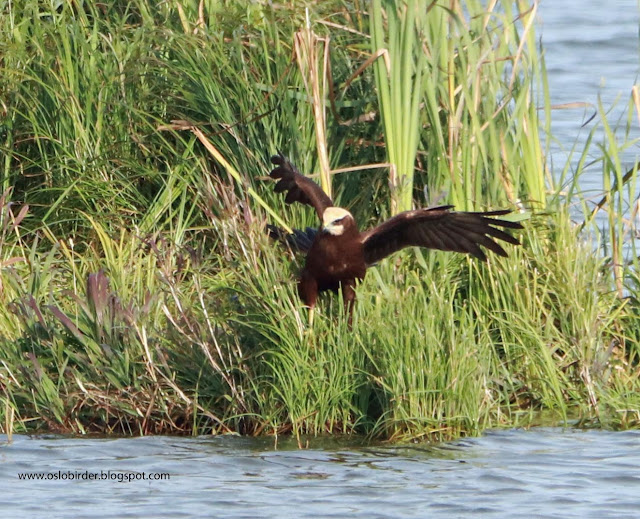