My last beans of the spring?

I thought that I was finished with the Scottish Taiga Beans after two of the tagged birds moved further north to a regularly used staging site in Hedmark 4 days ago on 27 March. However, another of the tagged birds was still transmitting from the Glomma area this morning so I decided to see who he had company of.

I was very surprised to find in total 44 Beans including 7 ringed birds. The ringed birds included the one that was supposed to be there “30” plus also “10” who transmits more sporadically. The geese were together but separate if that makes sense. Pairs, singles and small groups (family groups?) were scattered around and they are clearly getting ready for the breeding season. It is interesting how the flock breaks up before the final push to Sweden. The staging point in Hedmark has been used regularly by GPS tagged birds but the sporadic counts from the site (max 82 birds in 2014) have suggested that it is not used by the whole flock meaning that once they leave the Glomma that they may take different routes to the breeding grounds. Today though there was a count of 81 birds there including 8 with rings (awaiting details) so this means that the flock (129 maximum this year) is now split between Glomma and Hedmark. It will be interesting to follow 10 and 30 once they leave Glomma and see if they too stop off in Hedmark or choose a different route..

Together with the Beans was a single White-fronted Goose, 80 odd Pink-footed Geese and 34 Cranes. One of the Pink-footed Geese had a neck ring AG6. This bird was ringed 28.04.2016 in Mid Norway when it would have been on its spring migration. Since then it has been seen many times this winter, first in Denmark from 19 Oct, then in Belgium from 19 December until 28 Jan, in Denmark again from 24 Feb to 3 March and then my sighting today.

Pink-footed Geese were a feature of the day. A flock of 144 sat on the ice in Maridalen at 9am and were still there at 14:30, a huge flock of ca.700 were stood on the mud in Svellet and at Kjelle there were 44 which had the company of a Tundra Bean Goose. Rain and low cloud ha probably caused the Pink-foots to take a break on their migration.

Svellet held my first Curlew of the year. 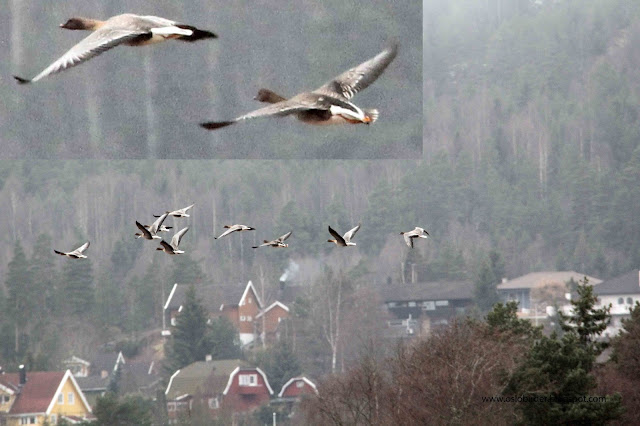 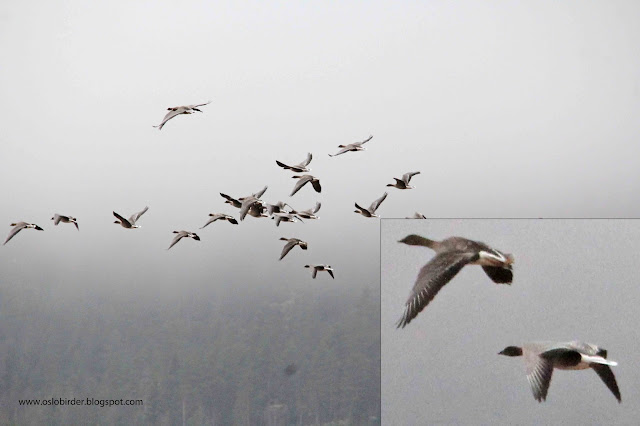 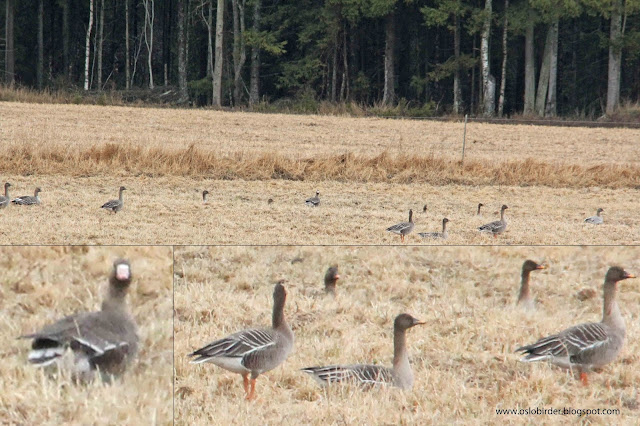 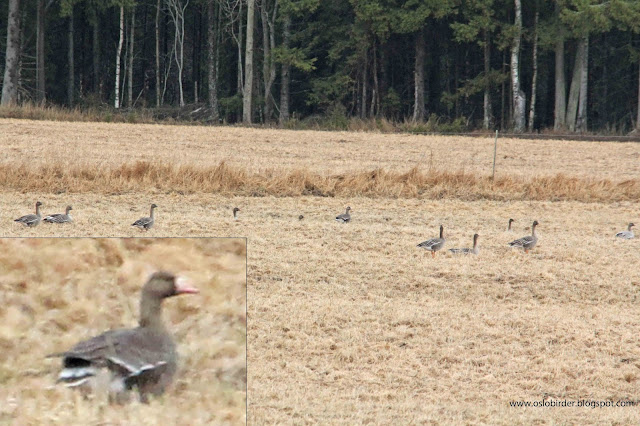 Well the forecast rain did come although not until the afternoon and what an effect it had! I had been in Maridalen early on and the fields were dead – the only interesting birds were 9 Twite but they flew over. After the rain came though (and in Maridalen it was also falling as snow) the same fields suddenly held 90 very actively feeding Starlings and 60 Chaffinches. Tomorrow promises to be good….

There were only two Lapwings in Maridalen today suggesting that conditions are still not perfect so instread of standing on the ice the extra birds have presumably moved off to better feeding grounds.


Nordre Øyeren gave me my first Snipe and Rough-legged Buzzard of the year but little else with hardly any ducks although Svelet now hosted 360 feeding Black-headed but zero Med Gulls. 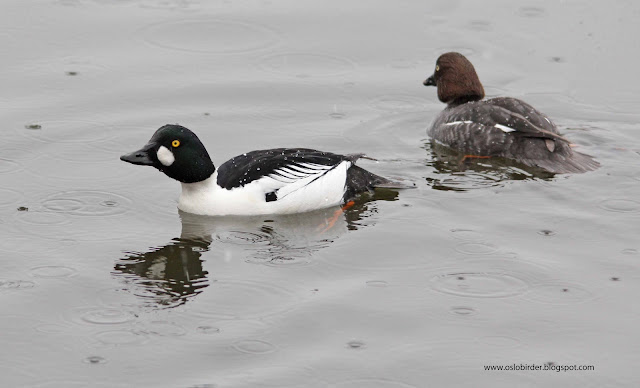 I read some colour ringed Black-headed Gulls at Langvannet today. No interesting sightings unfortuately with only one read outside of Norway: 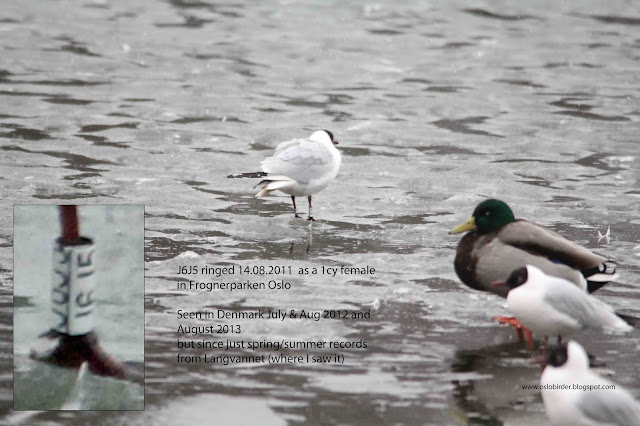 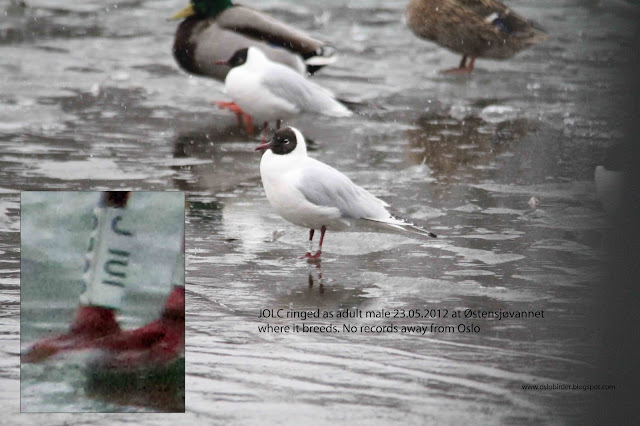 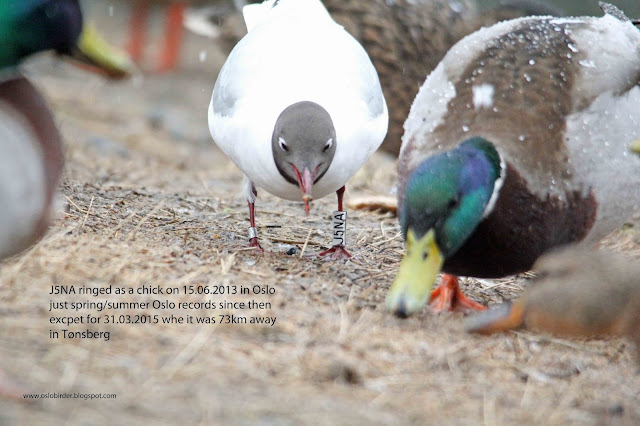 Oslo in a nutshell

I took in quite a few of Oslo’s best localities today in chilly temperatures but without the rain that was forecast and with few new birds,

Maridalen had 3 Lapwings in the morning but 6 by the afternoon which were stood on the ice – hopefully these (and more to come) will breed in the Dale. A pair of Sparrowhawks were displaying and showing off the size difference between the sexes. The Great Grey Shrike was still present and 6 Mistle Thrushes were feeding together with a flock of 9 Long-tailed Tits close by.

At Østensjøvannet lots of Black-headed Gulls were back although I couldn’t find any Med Gulls among them but hope one or more will turn up later in the spring. I did have my first Moorhen of the year which was a bird ringed in Stavanger plus a couple of Great Crested Grebes.
Bygdøy held a flock of 90 Starlings but little else of note.

Temperatures tonight are supposed to gown below zero with rain forecast tomorrow – expect it will be warm and sunny then. 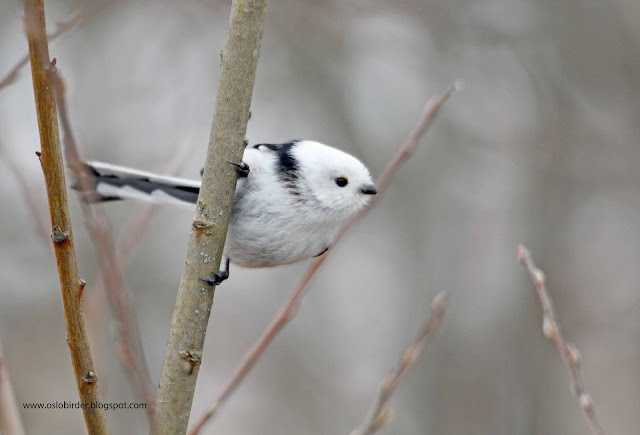 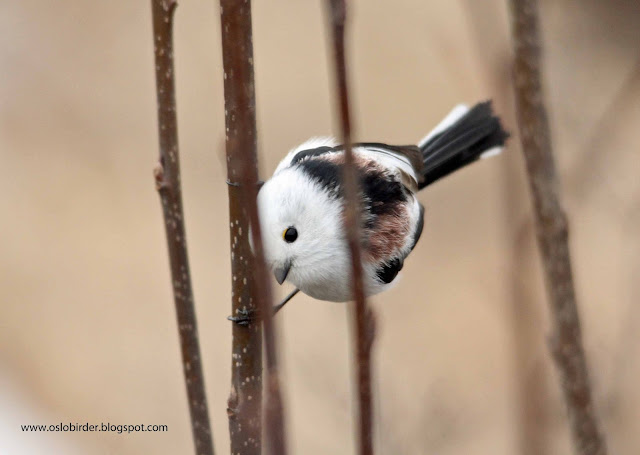 Still hot and still surprisingly few birds. I decided to do Maridalen thoroughly today which did result in my first Dunnock and Song Thrush of the year but I was expecting so much more. Rain that is forecast for tomorrow and Thursday will hopefully shake things up a bit.

I spent a lot of time gazing skywards and there was a trickle of Chaffinches and Wood Pigeons, three small flocks of Pink-footed Geese totalling 140 birds, a flock of 6 Greylags and best of all a pair of Cranes that spent time circling before heading south. The only raptor I could muster up was a local Goshawk. The silver lining though is that a lot of birds must be waiting to come north so we will hopefully get a big rush when it happens.

I also discovered nesting Tawny Owls and had good views of one of the adults roosting in a tree. 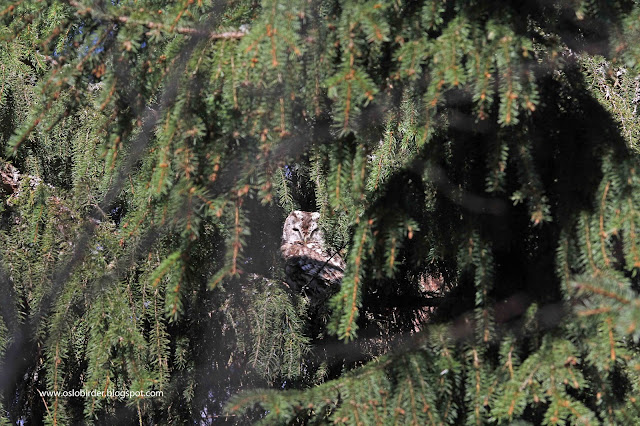 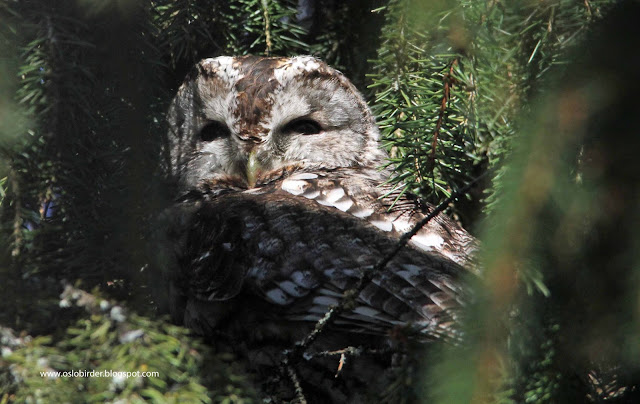 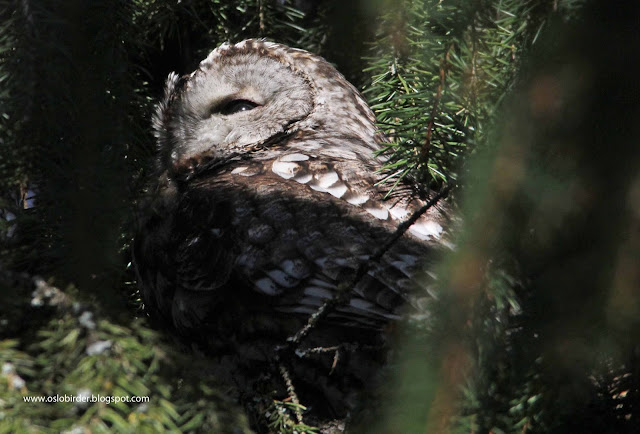 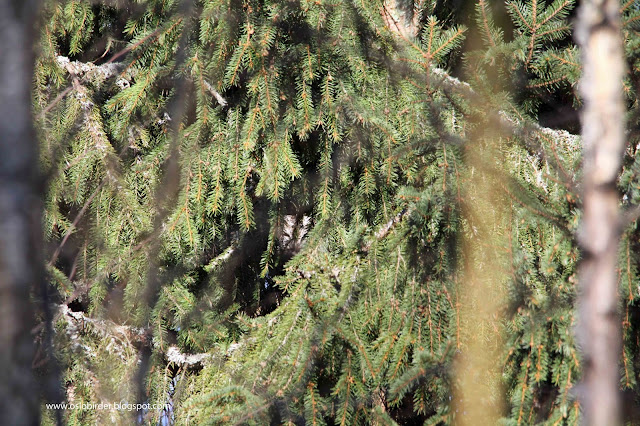 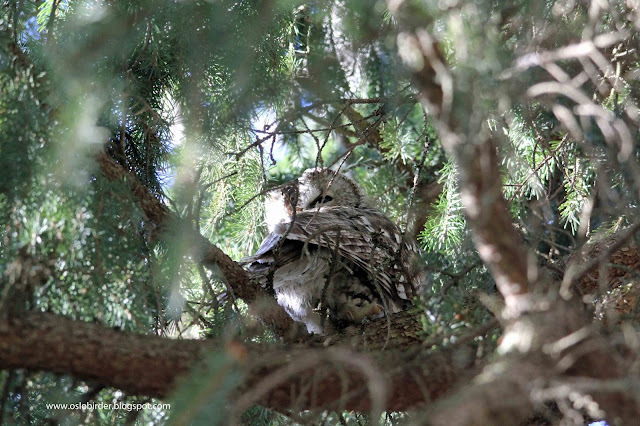 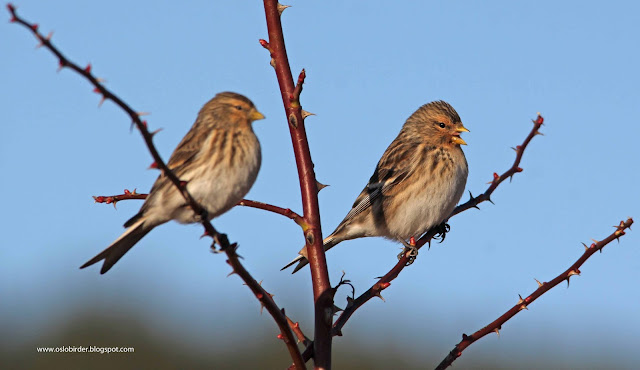 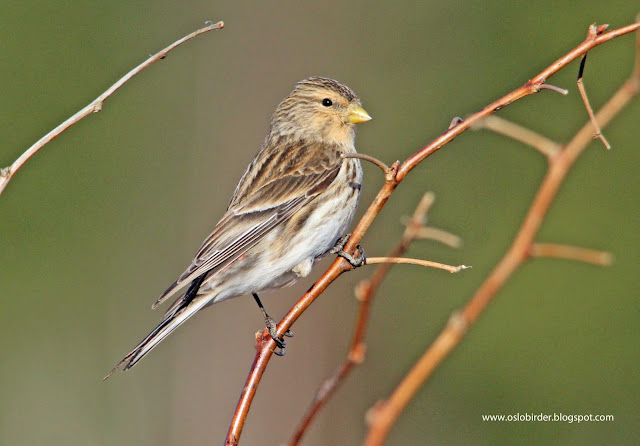 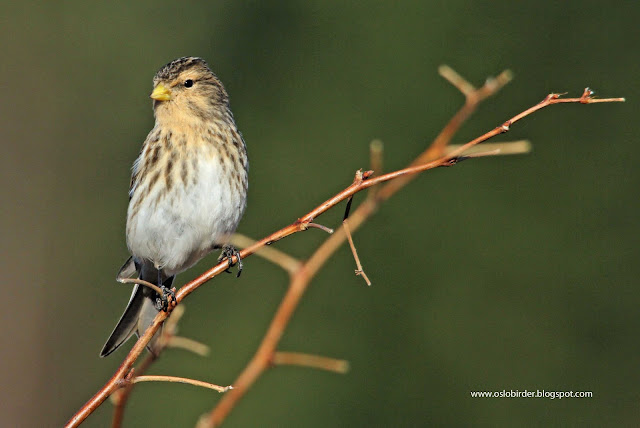 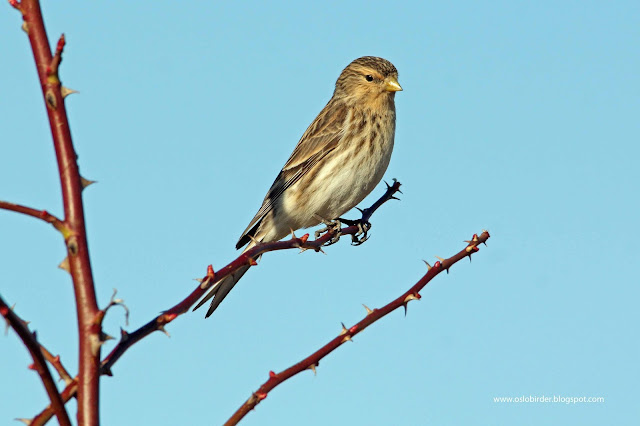