I did a Kjell today. By that I mean I found a good bird and didn’t have my camera with me 😊

Safely back in Oslo and normal life I took OB Jr to IKEA in the afternoon and as my reward I was “allowed” to stop off at the ponds at Valle Hovin where a 1st winter Med Gull was seen on Tuesday. The bird hasn’t been seen since which isn’t surprising since I understand it was blinged that same day. The perpetrator (I don’t know who it was) hasn’t reported the ringing. Maybe they are embarrassed as yet another rare gull has done a bunk after been foot-noosed and man handled? When a rare bird is specifically targeted and disappears (as happens time and time again) then one must assume that its behaviour is altered and therefore subsequent sightings do not represent natural movements?My birding wasn’t finished as I managed to sneak in a drive around Maridalen whilst supposedly driving to the supermarket. At the farm at Skjerven there has been a small flock of mostly 1st winter Common Gulls feeding ever since the fields were ploughed a little over 2 weeks ago and I have always stopped to look at them with the hope of finding a Med Gull amongst them. Whilst driving out of Maridalen today I saw there were 15 or so gulls and naturally stopped the car. I initially focused on the 1st winter birds but then a very white bird flew into my binocular view – a 2nd winter MED GULL! It was a classic bird with dark outer webs to the outer 4 or so primaries. I then panicked a bit. I always like to photograph rarities I find. It is good for the blog and saves me having to write a description of the bird. But as I was only supposed to going to IKEA I had not taken a camera (I always have a pair of bins in the car though). I thought about trying to take pictures with the mobile through the bins but in the end took a picture with just the mobile (turned out to be useless despite the bird only being 50m or so away) and decided to rush home for a camera. I was back after only 18 minutes but that was too long. There were still a few Common Gulls in the area but they were not feeding as before (it was now 4pm and with a dark sky and the wind picking up the birds were maybe thinking of heading for the fjord where they roost). I searched a bit and then went shopping and returned again (all the time with Jr in the car who was getting more and more desperate for the loo…) but it had not returned. So, I think this adds to the argument that you are more likely to find a rare bird when you don’t have your camera with you (which Kjell seems to have proven on Værøy).

Hopefully though it will be seen again tomorrow as the fields have been pulling in the Common Gulls and the previous Med Gull in Maridalen liked to feed with Common Gulls on ploughed fields.

This year’s Værøy trip feels like it is over before it started.

Yesterday finished with a Storm Petrel ringing session with 7 birds caught. These birds are truly amazing. It is one thing seeing them from a boat out at sea, but it is only when you see them in the hand that you appreciate quite how small and fragile they are. It is almost impossible to imagine how they lead such a truly pelagic life and don't ever seem to suffer from storms. Larger seabirds can often be "wrecked" by storms but not the tiniest of them all. I assume that they are able to fly in a tiny pocket of calm air just centimetres above the waves where they avoid the ravages of the storm.

It was calm overnight and we had expectations of new arrivals. My first bird was a Yb Warbler which is the first bird we have had in the north of the island and a clear new arrival. I also had a few newly arrived Chiffchaffs but not much else. I chose this morning to first head east from our house which Kjell did yesterday whilst Kjell headed west which I did yesterday. It should come as no surprise that Kjell again was the one who found something with another and seemingly newly arrived Red-flanked Bluetail! The bird gave is a bit of a run around before finally being seen by everyone. I had rattled off a couple of hundred pictures before checking how they were on the back of the camera but there were none and the camera said I had no memory card installed - but I knew I had put it in!! Checking it appeared not to have been pushed properly in but why had the camera allowed me to think   I was taking pictures? Well, I later discovered that the factory default setting is not warn you of a missing memory card. A big f*ck up from Canon if you ask me.

Luckily though the Bluetail showed again and even better so I did bag some good photos in the end.

In the afternoon I walked and walked around the gardens in the south without anything special to report for my efforts but my last bird of the trip was a Værøy tick. I drove back to the north to pick up Kjell before heading for the helicopter and we had a Grey-headed Woodpecker fly in off the sea from the north and then land on a hillside. We there then able to watch it clambering around on rocks looking for food. I have never seen this behaviour before although was aware they do it and was very happy to end Værøy 2018 like that.

No lifers, and hardly any year ticks, say enough about the quality of this years birding but that is part of the game and I wouldn't be without my annual trip. Kjell is staying on for at least another week and I look forward to him gripping me off with all sorts of rarities from both east and west. 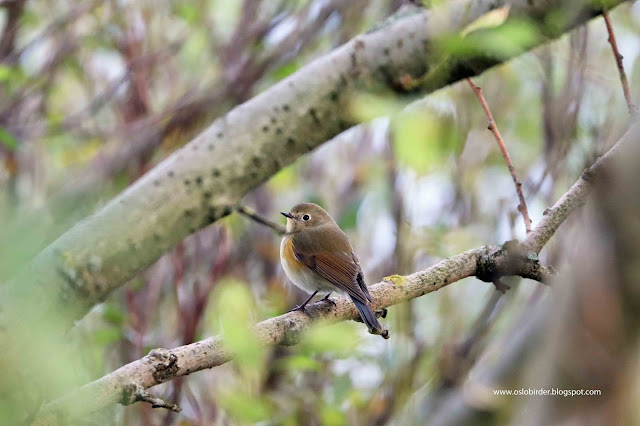 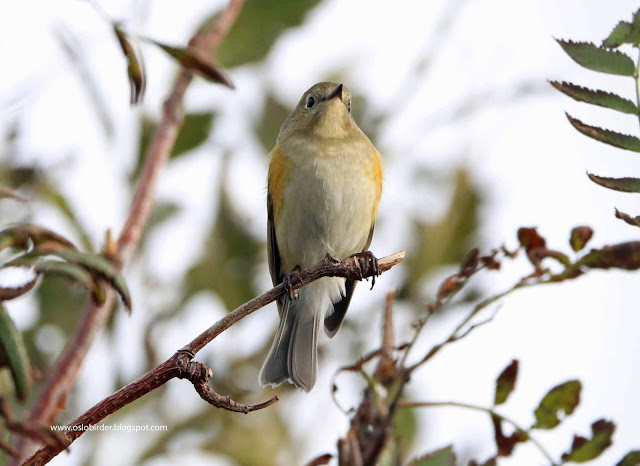 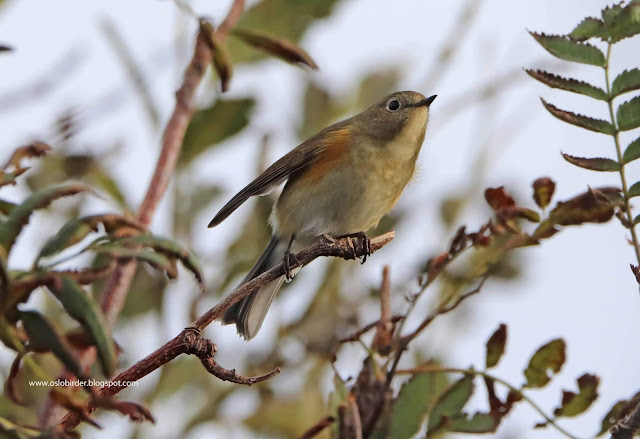 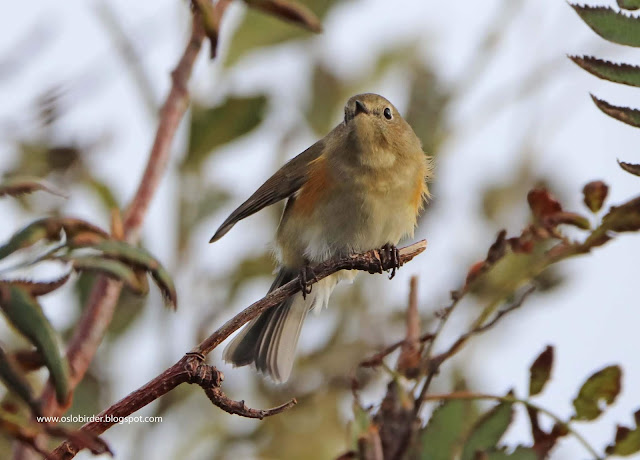 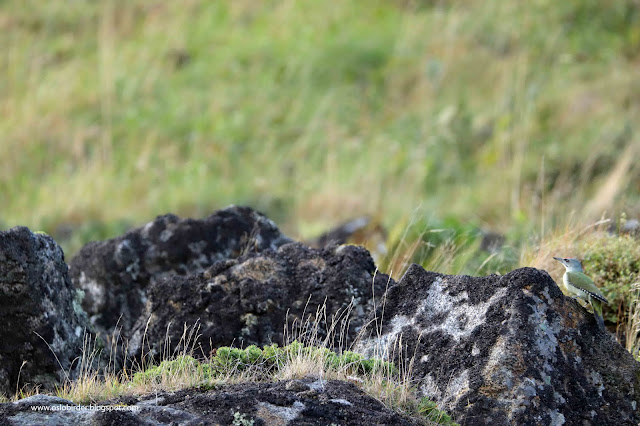 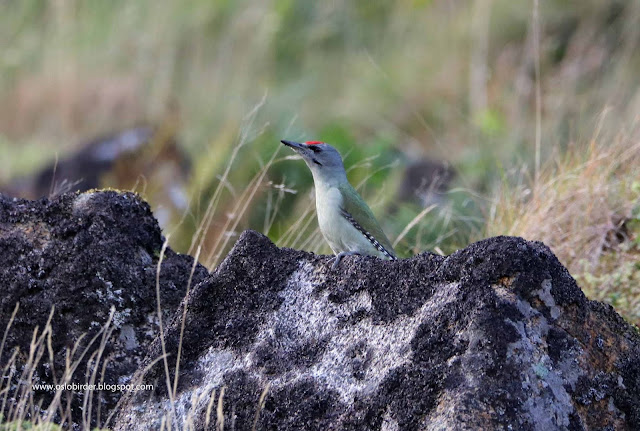 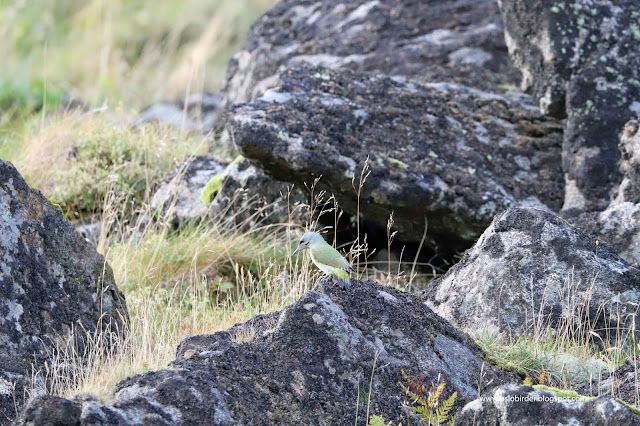 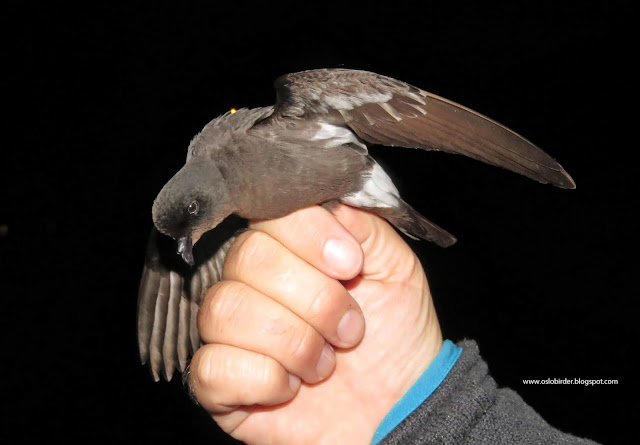 The weather today was conducive to birding with no rain after 10am and little wind but there were no new passerines to find with one notable exception. Kjell (who else?) found a Red-flanked Bluetail but it was not seen properly by anyone else and not seen in any form by yours truly.

A 1st winter Iceland Gull was new and showed very well and is a very early record and there were also some large, brown Redpolls which were probably also from Greenland/Iceland so the westerly winds have deposited some birds here (along with yesterday’s Redwing).

The good weather did allow us to find what was hanging around and I had 7 Yellow-browed Warblers along with Pied Fly, Lesser Whitethroat and Garden Warbler. Raptors were also up in the air and I had White-tailed and Golden Eagles, Merlin and Sparrowhawk.

Tomorrow is my last day and should be the best day based on the forecast so let’s hope it is. 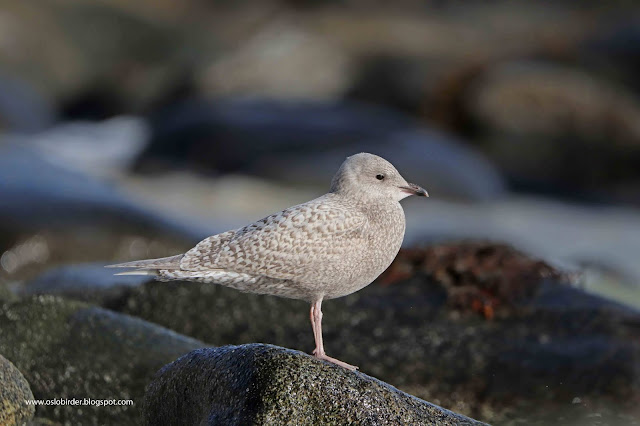 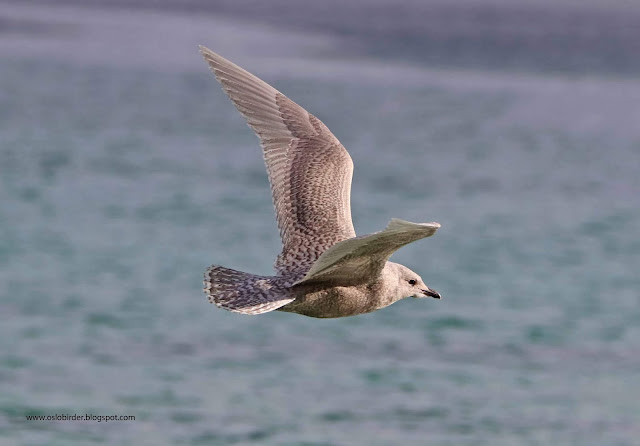 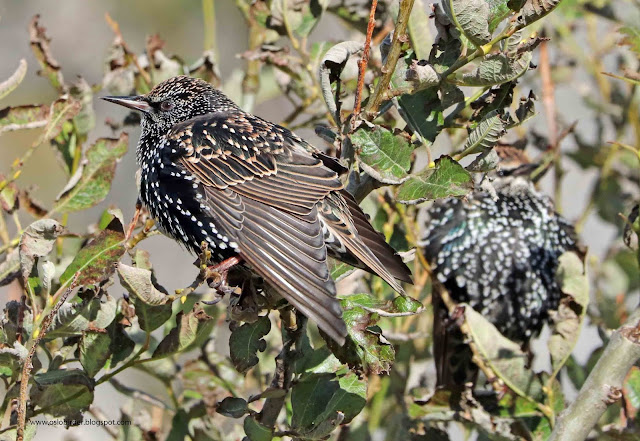 A day of changing weather. It started very windy from the west but in the early afternoon there was hardly any wind before we had a storm from the north by the late afternoon. We also had heavy rain but also periods of sun. In the morning there were birds in the air and there was a feeling that it might be a good day, but that feeling had disappeared by lunchtime.

I did get to check gardens in the south for the first time and ended the day with double figures of Chiffchaff, 6 Blackcap, 3 Garden Warblers and 3 Yellow-browed Warblers so there were some birds to see. I missed the OBP that others saw though.

An Otter family that showed at very close range without initially being aware of my presence was probably the highlight. Once they did smell me though they actually ran towards me as their den was under a large pile of wood that was between me and them.

The birding highlight (and this shows how desperate I was) came from a couple of very different Redwing that were feeding together which I assume must have been an Icelandic (ssp. coburni) and a Scandinavian bird together.
The weather forecast looks more favourable for the next two days and on Friday (when I leave in the late afternoon) it actually looks promising. 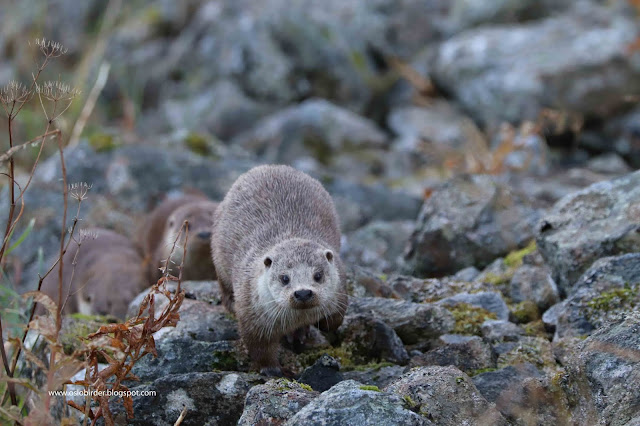 The first full day on Værøy was plagued with strong westerly winds and frequent showers in the morning. Not exactly the conditions you hope for but we are not going to sit inside feeling sorry for ourselves.

There was no viz mig to talk about and birds were generally scarce but when you have Kjell Mjølsnes in your “crew” (I absolutely hate that word but can’t think of anything better at the moment…) then there will always be something. Kjell has an almost supernatural talent for finding acros and locustellas and today he found a Blyth’s Reed. He flushed it out of waist high vegetation and was confident of the ID just based on flight views. In the end the bird was chivvied into a specially erected net and the ID was confirmed although the bird was especially pallid in colour and I had hoped for something even scarce based on the flight views I had. Blyth’s Reed is always a cool bird but is in fact the only (and pretty much annual) acro we have had on Værøy and a Marsh or Reed would be more welcome.

Otherwise there were a few Snow Buntings and Twite, I flushed a Jack Snipe, had a Spotted Flycatcher (a Værøy first for me) and (only) a couple of Yellow-browed Warblers. With the strong westerlies I thought a seawatch would deliver the goods but gave up after 15 minutes when I hadn’t even seen a Fulmar. So, a bad day on Værøy. 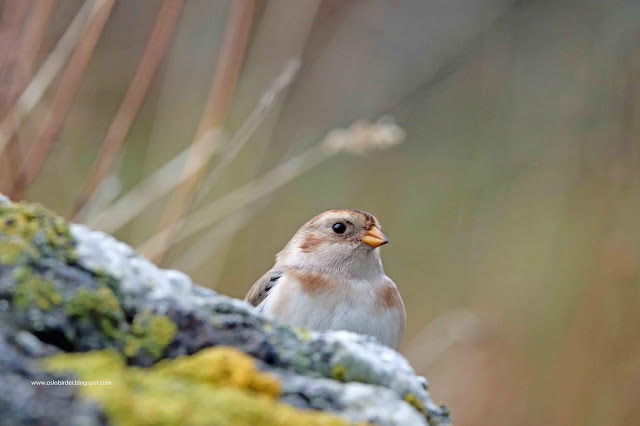 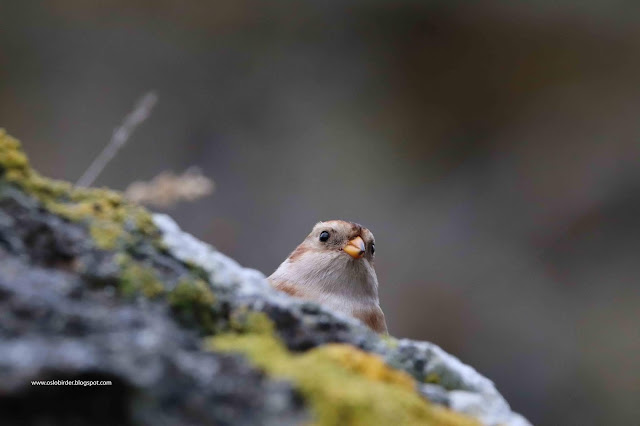 Every year on the way to Værøy I have a long enough layover at Bodø airport to have a walk around the nearby graveyard. My hope has always been to find a Yellow-browed Warbler here and although I have found other good birds such as Hawk Owl and Arctic Redpoll I have never succeeded -until today that is. It was really quite windy and I wasn't expecting to find much but as I walked through some scrub I put up a couple of Meadow Pipits and Dunnocks.

I stopped to get my bins out of my backpack and whilst doing so heard a Chiffchaff and then a Yellow-browed - bingo!

It was cooperative enough that it even allowed me to get my camera out and take some photos (which can be seen here as I am unable to upload photos whilst blogging on my phone).

This surely bodes well for Værøy where the weather forecast is improving with less wind and rain now expected.

EDIT:
an hour on Værøy before it got dark gave a couple of Yellow-broweds, Snow Bunting, and Ring Ouzel. I now have internet so here is the Y-b from Bodø. 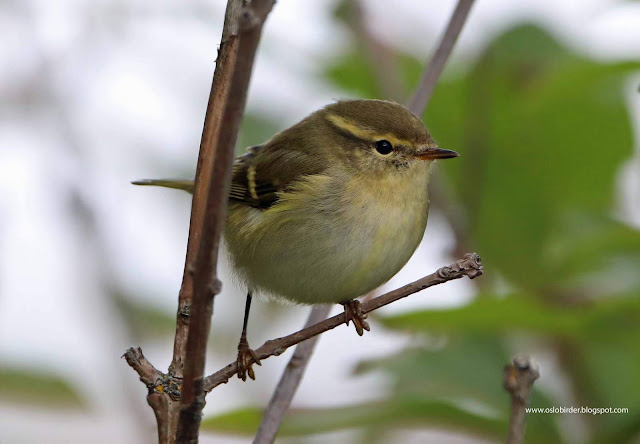 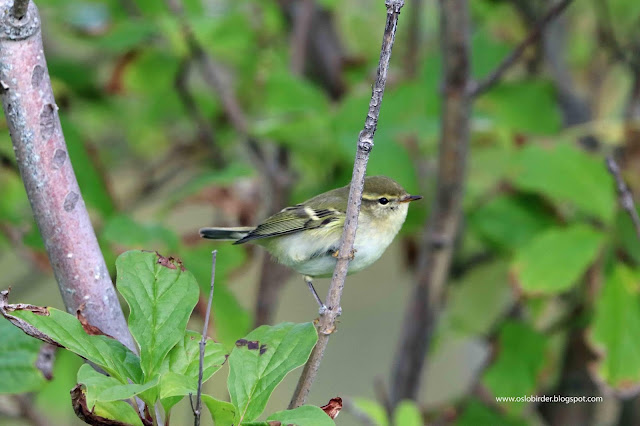