I have previously mentioned that Red-breasted Flycatchers have bred again in Oslo this year and promised a post on them. It has taken a long time to write the post because there has been so much to write about that I have not known where to start. In addition, the whole affair deserves more than a simple blog post and should (and may well) be documented in a scientific journal (Journal of Ornithology has been mentioned). In addition, the volume of photos and especially video that needed reviewing and editing was WAY too much.

The odd Red-breasted Flycatcher has been noted singing in Sørkedalen (Maridalen’s sister valley to the west) for a number of years and in 2015 we documented successful breedingfor the first time. Last year a pair was seen but then vanished and this year two males sang 100 metres from each other but without any sign of a female being present.

Maridalen though provided the real excitement. Here we had more than just breeding – we had cross species (hybrid) pairing, polygamy, adultery and general chaos. If it had been the story line in a soap opera people would have laughed and called it ridiculous!

Halvard Hauer discovered a singing male 21 May. Already two days later he (the bird not Halvard) had stopped singing although responded to playback and his behaviour suggested that he had a female on eggs nearby. Two days after this on 25 May Ellen Askum discovered a male singing strongly about 300m away. The next day Halvard had males at both sites within an hour of each other and it seemed natural to assume there were two different males especially as the bird at the original site wasn’t singing whereas at the new site the bird was singing strongly. I experienced the same on the 29th and also on the 29th saw briefly what I believed was a female with the male at the second site, but views were too brief to be certain of species (could have been a female Pied).

On June 2nd the male was again at the second site but not singing which suggested breeding. And then on 6th June a male was singing at a third site (site 3) which was 300m from site 1 and 600m from site 2 (see later picture). This was quite amazing – could there be three different male Red-breasted Flycatchers in Maridalen? Halvard had around this time noted from his pictures from the first two sites that the male looked to be the same bird due especially to a black spot in the white eye ring on left eye (a feature which we couldn’t find when reviewing other random pictures of the species) and I noted that this “new” bird also had the same black spot. It was now looking like it was the same bird at three different sites but why was it moving around and showing different behaviour at different sites? Later developments would give us the answer….

On 10 June Halvard found the male at site 1 visiting a nest box. Halvard had checked this box on 27 May (6 days after finding bird and 4 days after the male had stopped actively singing) when it contained 2 eggs that looked like normal Pied Flycatcher eggs (but no bird seen). On 10 June there were 6 eggs and a female Pied Flycatcher!! Over the coming days I spent a lot of time with the birds and the male R-b was clearly paired to the female Pied and was bringing food to her. I saw a male Pied Fly perch at the hole of the box but there was no interaction with the female.

On 14 June I found a female (coloured) Rb Fly at a new site (site 4) 150m from site 2. The behaviour of this bird suggested it was a female and not a 2cy male (which lack the red throat of older males). On the same day the eggs hatched in the nestbox at site 1 and the male was present (no photos).

On the 16th Halvard and I decided to get to the bottom of the case and I sat at site 1 and Halvard sat at site 4. The male was initially present at site 1 and was active around the nestbox and bringing food to the female. Halvard hadn’t seen sight nor sound of Rb Fly but after 55 minutes of action at site 1 I could not find the male anymore and then 5 minutes later he was at site 4 with Halvard. I remained at site 1 for 20 minutes without the male being present but Halvard was still seeing him. I then went up to Halvard. The male was hanging around a small area close to a nestbox and acting as though he had a female on eggs close by but he didn’t visit a nest and we didn’t see a female although I saw him interact with another bird and thought I heard Rb Fly calls from another area.

On 18 June Halvard again saw both male and female at site 4 but still without locating a nest.

On 20,21 and 22 June the male was taking food to the young at site 1. On 22 June a male Pied Fly also visited the nest box and was twice chased away by the male Rb Fly.

At site 4 I had no certain sightings of Rb fly (of either sex) on 20 and 21 June but on 22 June I had a number of sightings of the female (and photos) and suspected that she was on eggs and leaving them occasionally to feed but could still not locate nest.

It was Halvard again who made the important observation when on 24 June he found the nest. It was quite incredibly placed on a piece of broken off bark and looked to be very unsafe. But finding the nest was only the half of it – there was also a singing male and it was a 2cy bird lacking a red throat!!

The next day the new young male was bringing food to the female on the nest!!!!!

The fledging date at site 4 was 15 July and Halvard believed the young begun hatching on 1 July which is at the upper end of fledging times given in BWP 11-15 days. Working back from this with a given incubation period of 12-13 days means the 3 eggs were most likely laid between 16-18 June. Which tallies well with my first sighting of the female on 14 June and the presence of the 3cy+ male and is well before the 2cy male turned up.

Per Christian Moan also observed the birds and had sighting close to site 3 on 1 July of a 3cy+ male (presumably the original male) with a female (coloured) Rb Fly and giving alarm calls. We will never know who these birds were but hint at the possibility that the original male may well have had a third female (of his own species) at site 3.

The young that fledged from site 1 looked to be pure Pied Flycatchers and had no plumage characters suggesting that their genetic farther was the male Rb Fly. We also have a feather from one of the young plus 2 unhatched eggs from which we are (still…) waiting for DNA results from Oslo University where we involved Glenn-Peter Sætre who has spent years researching Pied Flycatchers.

The theory here is that the male Rb Fly had indeed formed a cross species pair with a female Pied (not sure if this can be called a hybrid pair as it is the young that are hybrids) but that she had already mated with a male of her own species (presumably the bird seen on a couple of occasions at the nestbox). This Pied Flycatcher male was most likely a polygamous male and the female was his second pairing (other Pied Flycatcher broods in the area were more advanced than this brood). He was therefore giving nearly his entire attention to his first female and this gave the opportunity for the male Rb Fly to pair with the female Pied Fly who presumably was happy to have a male bringing her food. We can find no reports of a hybrid pairing between Rb Fly and Pied Fly so this would appear to be a world first!

The other interesting behaviour we observed was polygamy in Rb Flycatcher as the older male had two females (of two different species). Polygamy was not reported in BWP but there is a subsequent paper from Poland which records this. Our sighting though would appear to be only the second documented observation.

What I find most amazing chapter to this story though is that the older male Rb Fly never actually raised his own young. He used all his energy bringing food to the Pied Flycatcher young and although he sired his own young with a female Rb Fly (although this is not proven by DNA) he then gave up paternity of these to a young Rb Fly male who paired with the female (but after the eggs were laid) and then raised the young. So, there were two Rb Fly males who raised another males young.

It will be very interesting to see what happens next year when hopefully a number of these birds will return. There were three breeding Rb Flys, 3 young Rb Flys, 4 young Pied Flys who think their dad is an Rb Fly and have heard his song plus a female Pied Fly who clearly likes the sight and sound of male Rb Flys. So series 2 looks like it could be even more scandalous! 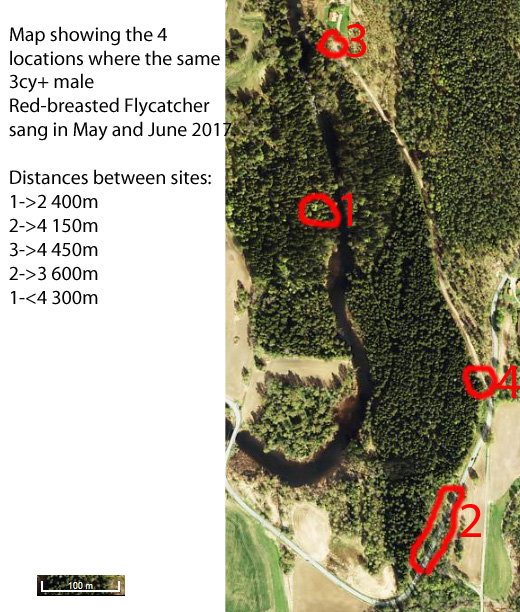 The following two videos tell the story of both nests. The good quality video is taken by Halvard Hauer (HH) using his Nikon P900 and a tripod whereas the rest is my usual hand held quality from my Canon SX60.

Video of the mixed pair: