I was looking back at sightings in November from previous years and have confirmed my impression that November 2017 is a particularly poor month. There are very low numbers of all species and no special species have arrived. All this is contributing to a mild case of birders depression for yours truly.

Yesterday I had a nice little episode with Bearded Tits at Fornebu whereby I could hear them giving their very quiet contact call and realised they must only be metres away from me in the reeds but it took me ages to see them low down and behaving more like mice than birds.

Today I decided to head out of Oslo and check out the Drøbak area. This normally quick journey now takes twice as long due to work on tunnels (Norway the masters of tunnel construction have been informed by the EU (of whom they are not a member) that their tunnels do not meet safety requirements which has caused a huge program of upgrading n tunnels across the land). Along the way I stopped to look for Kingfishers at their frequently used wintering locality in Bunnefjorden but didn’t find any.

At the marina at Husvik three Little Grebes showed incredibly well as they dived for food close offshore. They caught a number of small fish whilst I watched and this area has overwintering birds annually. It is a bit of a mystery as to where they come from as there are incredibly few breeding records of this species in Norway let alone the Oslo area but it might well be that the species is overlooked in the breeding season rather than them being long distance migrants.

A young Common Seal was hauled out on a pontoon and a flock of 100 Common Eiders were feeding on mussels in the marina but otherwise there was little to see here. A bit further south a flock of 54 Velvet Scoter was a good local count and I had a hope of finding something rarer amongst them but will have to keep hoping.

A stop at Østensjøvannet on the way home revealed a young male Wigeon that was very keen to eat bread. This bird is ringed and apparently got the bling here a few days ago but for some reason this has not been reported. The local council has hung up signs telling people not to feed the birds here. This is a reaction to some people dumping enormous amounts of mouldy bread and pizza bases. This behaviour clearly needed to be addressed but the signs and unfortunate statements from the misguided leader of the local bird club (basically saying that by giving ducks bread that you are harming them) has left people feeling like criminals for feeding the ducks which has resulted in fewer people coming with food. Luckily though there are enough sensible people that ignore the signs and the wildfowl that choose to winter here are getting food. Judging by their eagerness today though they are only just getting enough and a group of 20 Feral Pigeons were also getting in on the action. They were clever enough to realise they had no chance against the ducks once the food was on the ground so were landing on people to take the food out of the hand. I decided to get in on the action and manged some selfies with the pigeons. Not quite the same as a selfie with a Hawkie but fun none the less. 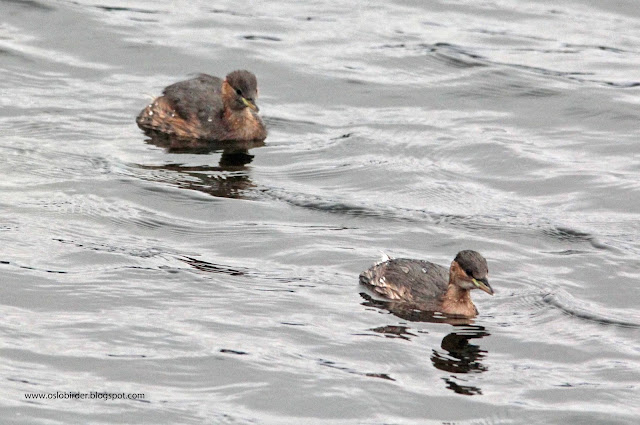 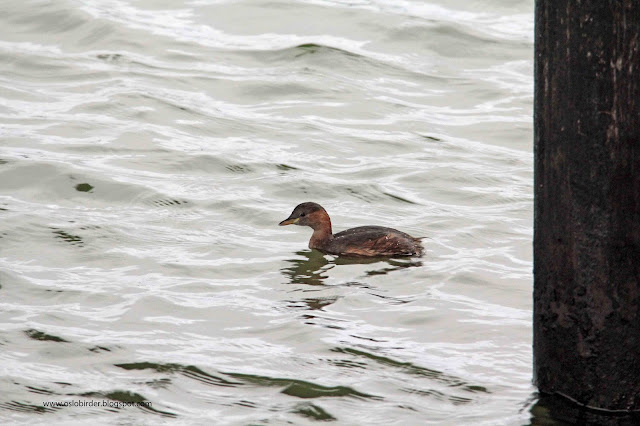 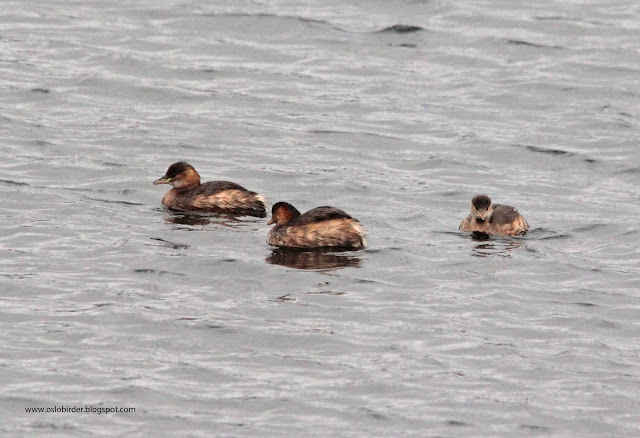 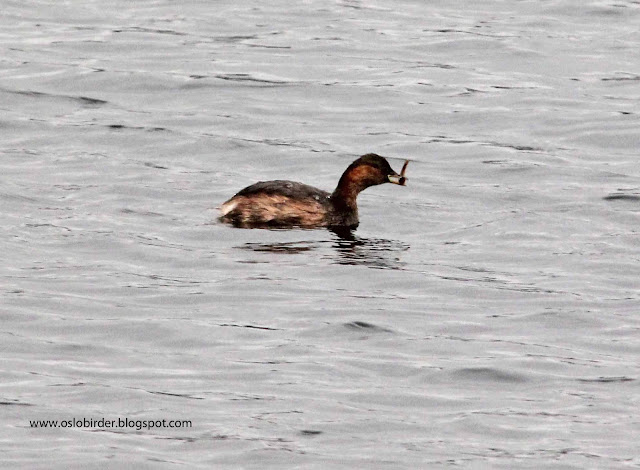 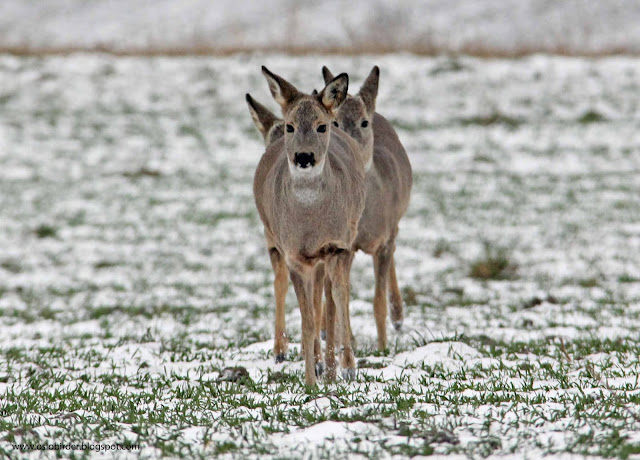 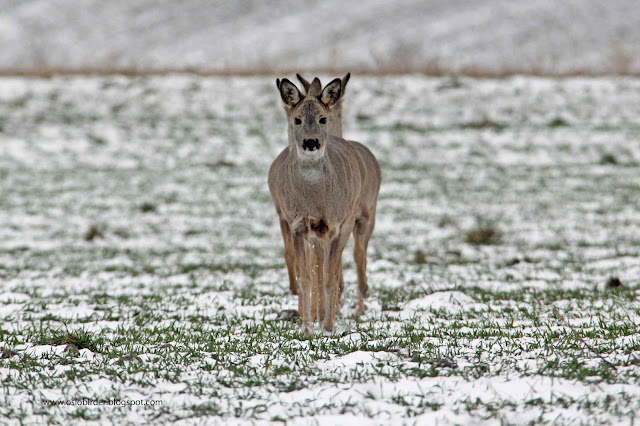 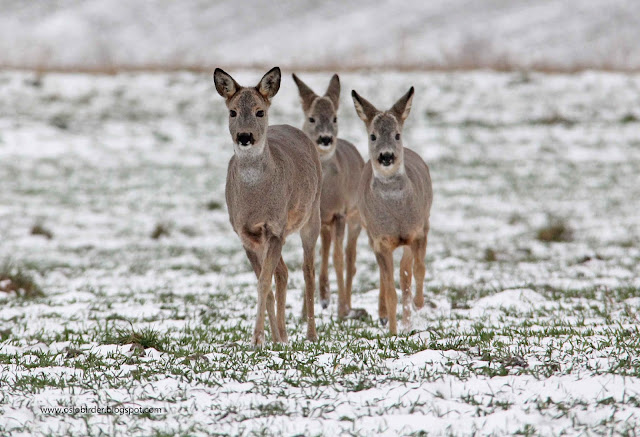 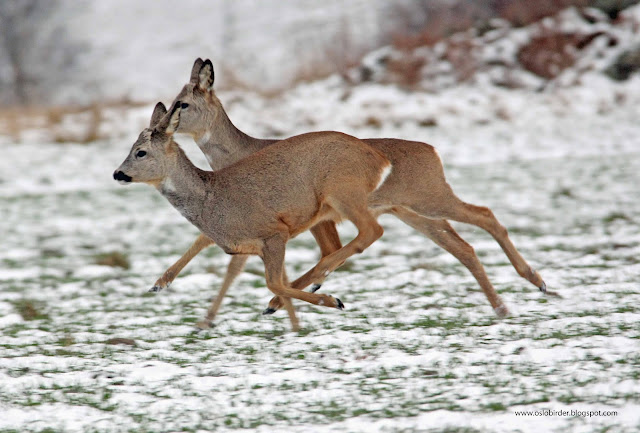 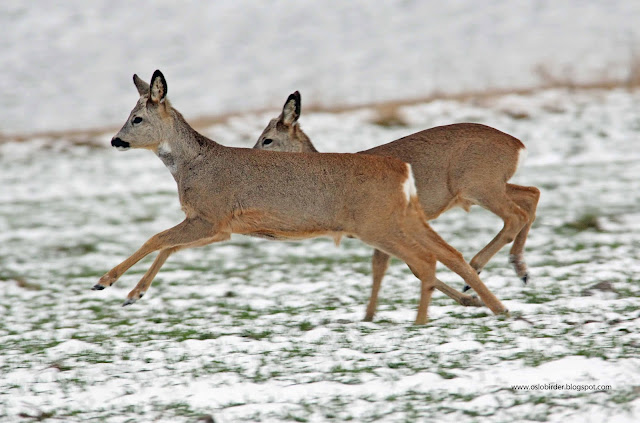 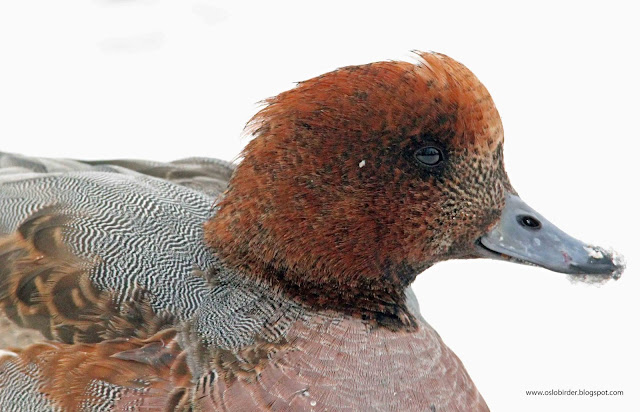 It’s all quite wintery at the moment with snow and a cold north easterly wind. Birds are wisely keeping their heads down but trips around Oslo yesterday and today revealed some of the usual suspects. In Maridalen yesterday I relocated one of the Pygmy Owls and even recorded a bit of song. A couple of Goshawks were also calling and in territorial display flights which was surprisingly early.
At Fornebu Water Rails were vocal but the Bearded Tits are well and truly settled in and a couple of pings was the only evidence I had of their continued presence.
Today it was so windy that a trip around Maridalen revealed nothing except a Cormorant on the lake. At Frognerpark the Moorhen is still going strong and has clearly decided to try to spend the winter here. Only 5 Grey Herons were present but 11 Teal, 11 Tufted and the male Wigeon were all still present.


Huk, Bygdøy held Common and Velvet Scoter and a single Guillemot but nothing rarer and Østensjøvannet had nothing exciting – I had a hope that the Iceland Gull from last winter may have reappeared this winter. 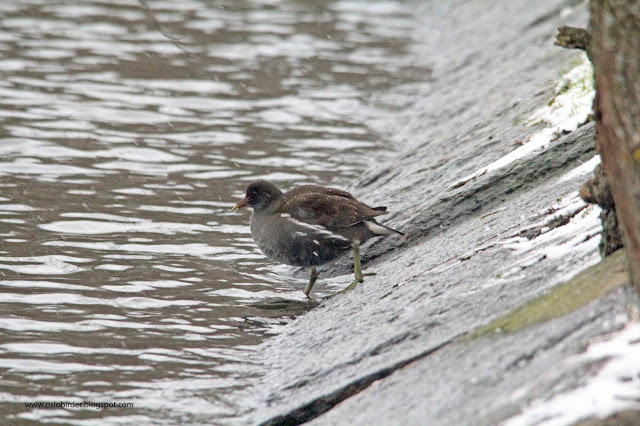 On Friday I had the company of Forde Falkenberg who was over from Bergen. We visited Fornebu where Bearded Tits were the main target. Before I met up with Frode I had visited both Holtekilen and Storøykilen and seen or heard the birds in both places. With Frode though it was a bit more difficult. In Holtekilen we heard a couple of birds ping but try as we might we could not see them. In Storøykilen after a lot of work we did see a pair low down amongst the reeds but they were really not interested in showing themselves.

One bird which did show itself and which was entirely unexpected was a Hen Harrier. When we arrived at Storøykilen we saw and heard a lot of angry Crows. When we then saw them chasing a large pale bird of prey I immediately thought it was a young Goshawk but on raising the bins I saw it was a ringtail Hen Harrier. The Crows continued giving it grief and it disappeared after a couple of minutes but certainly made the day. This species has attempted to overwinter here a couple of times in the past but with all the development that has occurred in recent years there is very little undisturbed open ground left for the species to hunt over (Kestrels have already thrown in the towel) so it was a real surprise that it was also seen today (Saturday) which indicates that it may well stay around for a bit. 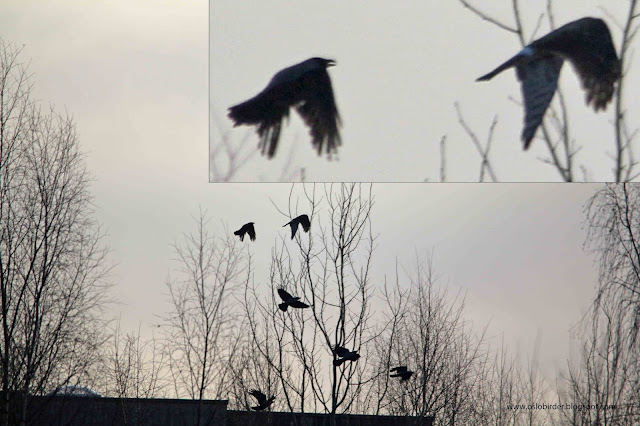 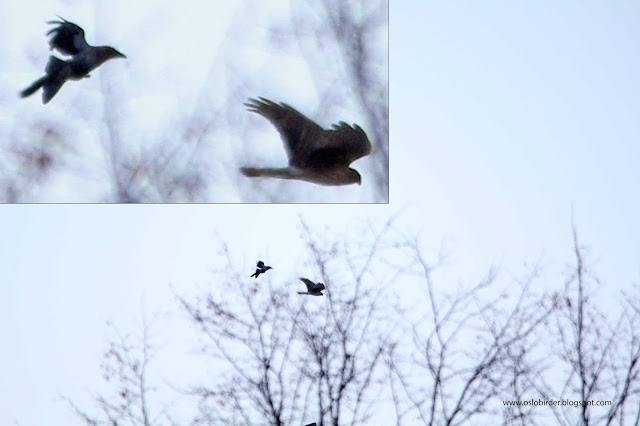 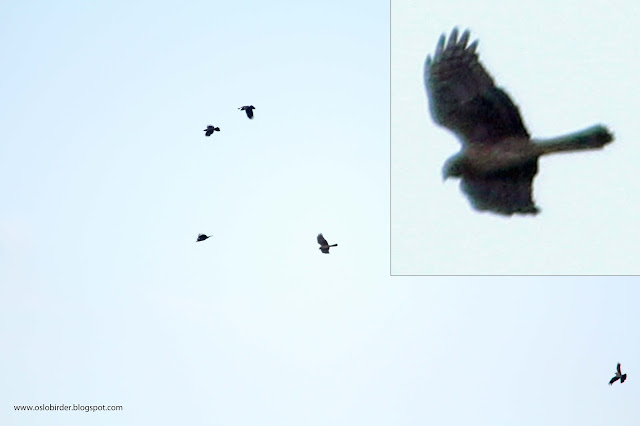 Yesterday we had a lot of snow and -6C and everything turned white and very wintery. Today we had rain and +7C which made everything very icy and slippery. There was also a lot of wind today which I had not noticed on the weather forecast. It was only when I walked outside that I realised how strong it was and it was coming right from the south – ie good for sea gazing.

I chose not to go down to Krokstrand but instead went to Fornebu where I was able to find a viewing spot out of the wind. Initially there was not really anything to see but after 45 minutes a flock of 8 Long-tailed Ducks including 5 adult males flew past. Then a few auks went past and Common and Velvet Scoters. There were very few gulls, but I grilled everyone and a nice adult Little Gull went past and then a Puffin! Not bad at all J

At noon after an hour and 45 minutes my teeth were chattering so much that I had to retreat to the car and turn the heating on max. I drove to another site where I could view from the car and had two Kittiwakes going past. The wind was if anything blowing stronger now so there was a chance that new birds would turn up but I was so cold to the core that I had to throw in the towel. This time of the year is good for a Leaches Petrel to turn up and that was my hope for the day once I realised how strong the wind was but I’ll have to keep waiting to see that species in Norway.

Yesterday in the snow I visited the Botanical Gardens in Norway. Despite there still being a lot of berries on some of the trees there were few birds (no Waxwings for example and only 1 Hawfinch) but there were 4 Nutcrackers feeding on cones from the same Weymouth Pine which also hosted three Common Crossbills. It was very interesting to see how one single tree could be so important but remined me of how the single larch right next to this pine has in previous winters held numbers of Two-barred Crossbill, Goldfinch, Siskin and various tits which seemed to spend their whole day just feeding on the cones of this one single tree.

In Maridalen I noted some interesting behaviour from two Great Spotted Woodpeckers in response to playing the song of Pygmy Owl which can be seen in one of the videos.

I was so desperate for something new and exciting that I visited just about every birding locality in Oslo except for Bygdøy yesterday. I even paid a very fleeting visit to the rubbish dump for gulls (always a sign of desperation for me). What I should have done though was stay loyal to Maridalen where a keen pair of eyes spotted an overflying Long-eared Owl which then fought with a Sparrowhawk. This is a late record of a species that isn't even on my Oslo list and just goes to prove that birding can always produce surprises.

My two visits into Maridalen produced nothing more exciting than a Nutcracker. The dump held only Herring Gulls and Østensjøvannet had just the regular female Pintail alongside a couple of hundred Mallards and 8Coot.

Fornebu did give very good views of 6 Bearded Tits and a couple of calling Water Rails but that is to be expected at the moment.

Perhaps the best birding of the day was at Frognerpark. Here an amazing 9 Herons were roosting in a tree at head height very close to a path. This species only started being seen regularly in the park a couple of winters ago so to see 9 birds that have clearly got used to humans was quite a sight. 12 Teal is also a good count for a species that has also only recently started to spend the winter here and the (ringed) male Wigeon that arrived as a young bird last winter has also returned in full adult plumage. A Moorhen was unexpected as were a pair of Mute Swans (again a species that you wouldn't see here two years ago but which now breeds).

It is snowing today but tomorrow it will all turn to rain... 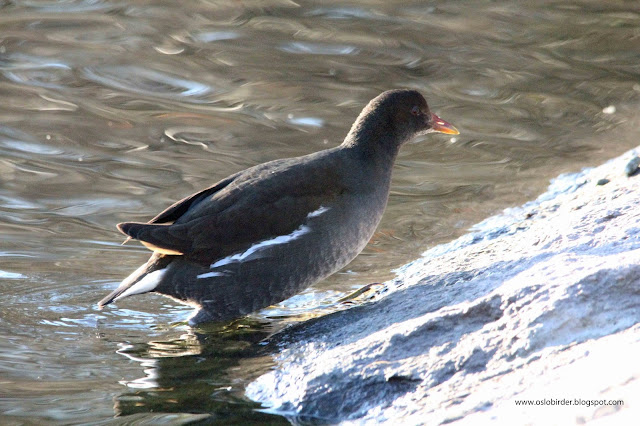 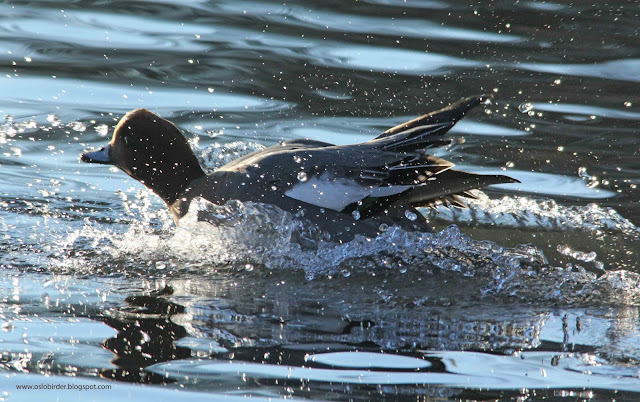 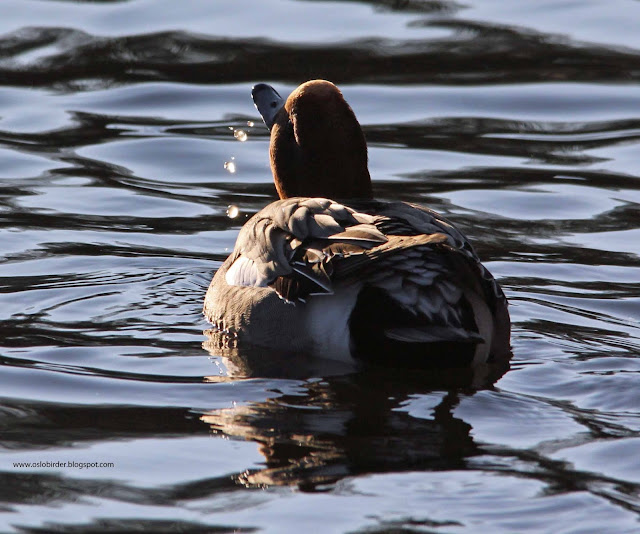 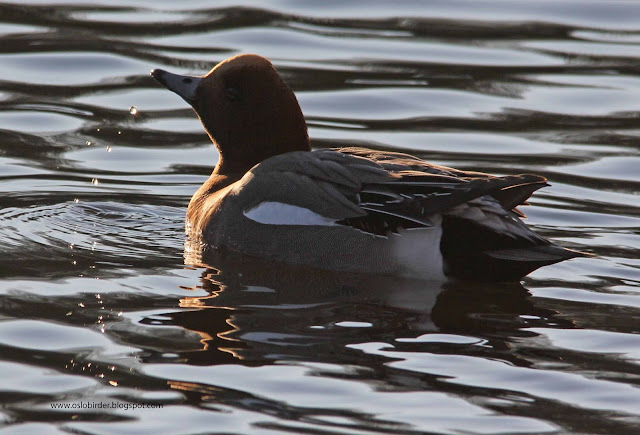 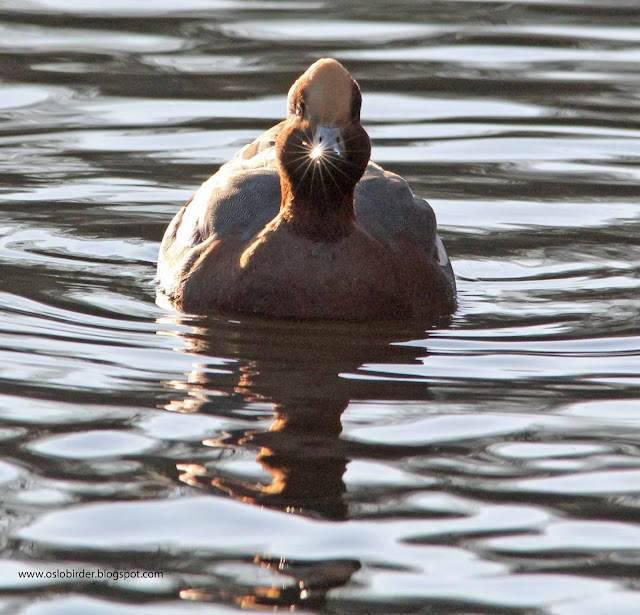 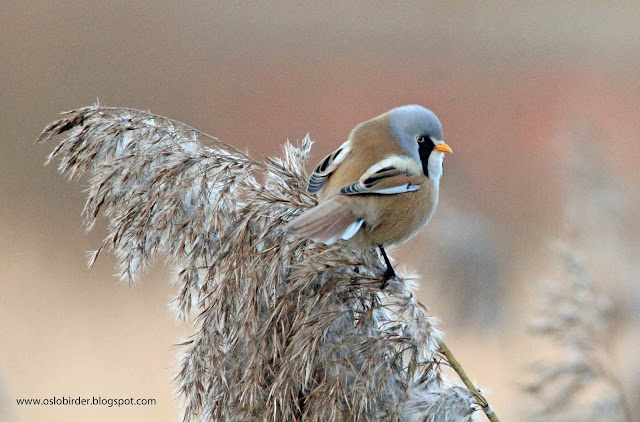 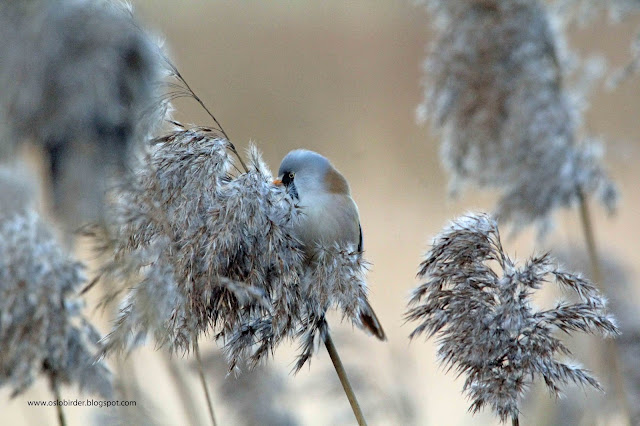 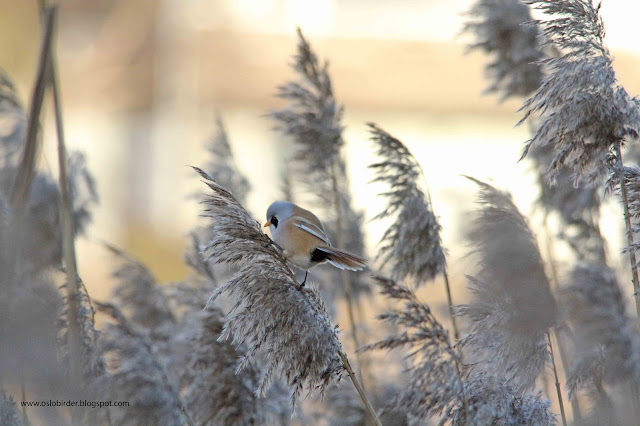 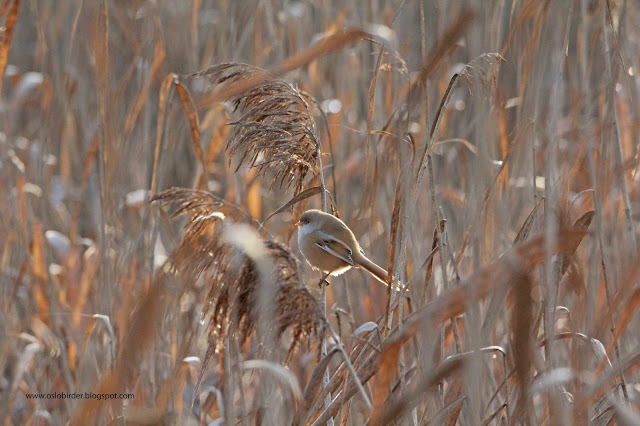 It really is quiet at the moment on the bird front. Summer migrants have all left but there are very few exciting winter birds around. The Pygmy Owls in Maridalen don’t seem to be around anymore with a bird I saw early on Saturday morning the last sighting.

There have been some reports of large flocks of Pine Grosbeaks and Waxwings in the north of the country over the last few days so there is a chance that both these species will filter down to Oslo.

At Fornebu there are still Bearded Tits in two of the reedbeds but they are hard to find. A Chiffchaff called once with a call reminiscent of a tristis but I never saw or heard the birds again. 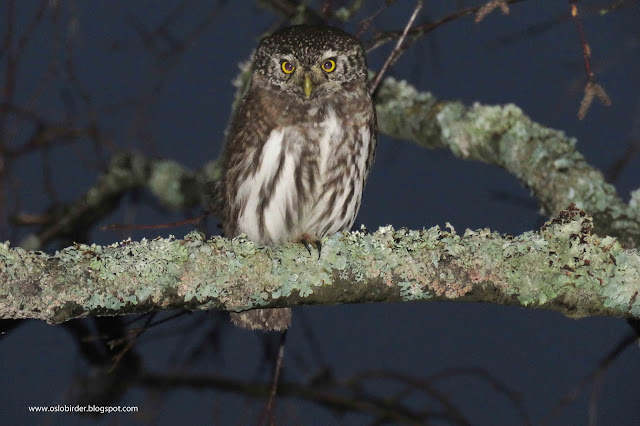 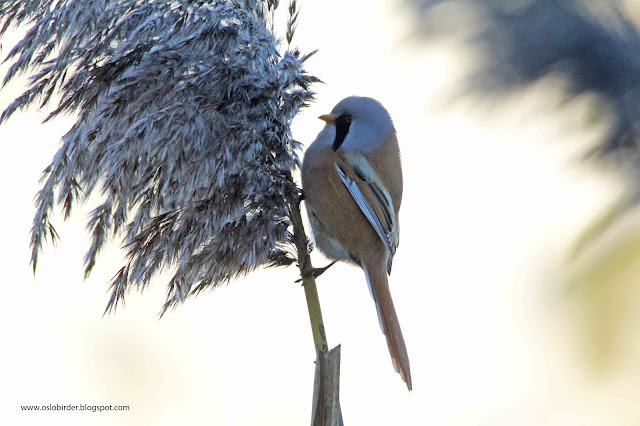 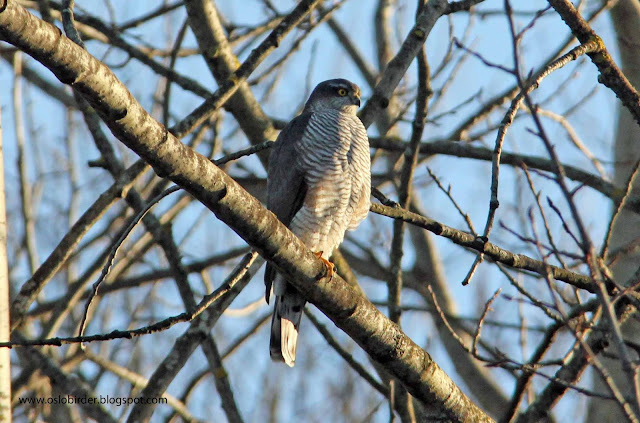