No birding to speak of today as a teachers strike closed schools and left me looking after the kids.
At Sorgenfrigropa which Rune and I visited yesterday and where we had both Marsh (myrsanger) and Reed Warbler (rørsanger) a Great Reed Warbler (trostesanger) was found singing today. It was at the opposite end to where we were so who knows...
Took this video of feeding time in the nest box today.

I am not much of a twitcher but if a bird hangs around then I eventually make an effort to see it. Øra (a large rubbish dump that was made in the middle of a bird rich estuary by Fredrikstad) is only an hour and a half from Oslo and has since Sunday held male Blue-winged Teal (blåvingeand) and male Kentish Plover (hvitbrystlo) which would both be Norwegian ticks for me. Rune and I decided to make this the destination for our trip today. On the way down just after sighting a male Marsh Harrier (sivhauk) by the road we received a message that the plover had been seen but not the teal which in addition had been seen flying south last night. Oh well, I don’t like things too easy.

We got to Øra at 1015 and the haze and distance already made viewing conditions difficult but after 5 minutes we discovered a small group of Ringed Plover (sandlo) and Dunlin (myrsnipe) and there amongst them was the male Kentish Plover. Not exactly frame filling views but good enough. Little else to see here and no dabbling duck at all except for a female Mallard (stokkand) with ducklings. We went for a walk around the area and clocked up 2 hunting Ospreys (fiskeørn), single Marsh Harrier, calling Bearded Tit (skjeggmeis), singing Marsh Warbler (myrsanger), Reed Warbler (rørsanger), Whitethroat (tornsanger) and Lesser Whitethroat (møller). Rune was getting itchy feet but I persuaded him to hang in there.  The small waders had disappeared when we got back from our wander and were not to be seen by us again. At 1140 however a summer plumaged Black-tailed Godwit (svarthalespove) flew in and then at around 1200 some ducks started to appear. First around 10 male Mallard, then a single Teal (krikkand) then two more Teal and then a group of nine Teal. Just then a couple of birders turned up and asked if we had seen the Blue-winged Teal. “No” (or “nei”) I replied and before I took a breath I changed that to “JA” (no translation needed) as suddenly there he was!! Where the ducks appeared from I can’t be sure but they had probably been on the back side of a small island of reeds. Our patience was definitely rewarded.

No pictures of any note although this one might go into the category bad documentation photo:

Checking Sorgenfrigropa we had great views of a singing Marsh Warbler out in the open in the middle of the day. Unfortunately not close enough for a good picture but here you can see some diagnostic features although at this time of the year song is the best.

When the birds sing so vigorously in the middle of the day I assume they are newly arrived. A Reed Warbler sang close to the Marsh Warbler allowing their songs to be compared. With all the mimicry in the Marsh Warblers’s song they are actually very different. Also here a single summer plumaged Slavonian Grebe (horndykker) and seven Great Crested Grebes (toppdykker).
Driving back we had a female Marsh Harrier and two Ospreys at Skinnerflo (where we had seen a male Marsh Harrier on the way down).Ovenbukt in Kurefjorden had no waders of note but this adult male Peregrine Falcon (vandrefalk) gave good views.

Nearby we had 2 Buzzards (musvåk) including one that dived from great height into a forest, presumably part of a display, and a Hobby (lerkefalk).
Lagt inn av rixy kl. 20:44 No comments:

Today I spent the morning surveying breeding birds at Ekeberg. Luckily it is a lot cooler now although still with blue skies and this made the birds more active than they would otherwise have been. No real surprises so far but five singing Wood Warblers (bøksanger) was a good count and a singing Stock Dove (skogdue) was unexpected.
Birdlife in Maridalen in the afternoon was also more active than of late. The male Red-backed Shrike (tornskate) perched up with a big orange bug but soon disappeared – presumably visiting the female on the nest. The Tawny Owl (kattugle) was easy to find and from the nest box I could hear the youngsters. One of the Wrynecks (vendehals) popped its head of out of the nest hole and best of all was two singing Common Rosefinches (rosenfink). I first heard a bird I thought was a calling Greenfinch and soon saw the bird – my first thought was a very early juvenile Greenfinch (grønnfink) but then my brain started working and I realised it was a female type Rosefinch. Soon a red male turned up and was chased away by the female type. Then the red male started singing in the open and another bird responded in song. There could well have been 2 males and a female but I believe the first bird I had seen was a 1st summer male and this was the second bird I heard singing.
No sound from the River Warbler in the middle of the day but he was singing at 11pm last night.

At 11pm last night I decided to give Maridalen a try for any nocturnal singers even though I was exhausted from the camping trip. It was still light when I got there and Fieldfares (gråtrost) and Robins (rødstrupe) were still singing but they soon became quiet. At one stop as I wound down the car window I thought I heard a Grasshopper Warbler (gresshoppesanger) but soon realised it was the fan in the car. At the church ruins I walked up to be able to hear further and through some noisy Common (strandsnipe) and Green Sandpipers (skogsnipe) (they always seem to make a racket just before it gets dark) I was convinced there was a “reeling” sound coming from the marsh. I walked closer and yes there was! But this was not the reeling of a Grasshopper Warbler this was the sewing machine noise of a River Warbler (elvesanger). Another national rarity!!
I was able to get close to the bird in the dark and record its song but had no chance of seeing it. I put out the news and Per Christan came down straight away. We listened to a couple of recordings of River Warbler and became a bit worried that this bird was singing too quickly but on getting home I found there is actually a good deal of variation in the speed at which they sing.
I went to sleep with the sound of River Warbler in my ears and was awake again before 4am and found myself driving up to see if I could get a picture. The bird was still singing and I could see it flitting deep in the bushes but taking a picture was more difficult. In the still poor light this was the best I managed:

The video though at least allows you to hear the amazing song which is the most distinctive aspect to this rather dull looking bird. At the end of the video you also get to see the shadow of the bird!
Lagt inn av rixy kl. 21:41 No comments:

We camped last night by Øyungen lake, north of Maridalen. In temperatures in the high 20’s it was a perfect location and with midsummer fast approaching it was still light in the sky at midnight when I went to sleep and already light before 4am when the dawn chorus awoke me. No surprises on the bird front with a distant singing Black Grouse and a pair of Black Woodpeckers calling and drumming the highlights. In the small bay by which we were camping there was a shoal of around 100 minnows which attracted the attention of a group of six medium sized perch and we could watch and hear (much jumping of fish) the perch hunting the minnows. We even caught one perch and grilled it although it was of such a size that we only got to taste a tiny morsel each. It was actually quite tasty though – although I would never have entertained the idea of eating a perch back in the UK.
Lagt inn av rixy kl. 21:39 No comments:

Email ThisBlogThis!Share to TwitterShare to FacebookShare to Pinterest
Etiketter: Øyungen

At the end of May there is small passage of Brent Geese (ringgås) from Denmark up the Oslo fjord. I have never witnessed this movement before and after reports of the first flocks following the normal route up the west coast of Norway yesterday I thought today would be a good  chance to try to see if any birds were migrating past Brentetangen.
I gave it 4 hours from 0525 to 0925 without any Brent Geese but I did have some compensation in the form of a summer plumaged White-billed Diver (gulnebblom) flying north at 0625. It was on my side of the fjord but too far away for picture. This is actually the first time I have seen one of the large divers in summer plumage and what a smart bird it was especially with that enormous white bill! A single dark phase Arctic Skua (tyvjo) flew close by and chased a Common Terne (makrellterne), 54 Red-throated Divers (smålom) flew north, 5 Little Gulls (dvergmåke) lingered in the middle of the fjord, 10 Arctic Terns (rødnebbterne) flew north in a flock, a single male Scaup flew north and a flock of 80 Common Scoter (svartand) sat offshore (I scrutinised them for something rarer with no joy). A flock of 15 Parrot Crossbills (furukorsnebb) migrated north and landed briefly in the pine trees where I was singing with one even singing – it appears that a small movement of crossbills is just starting. 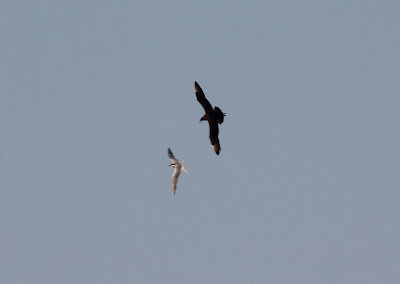 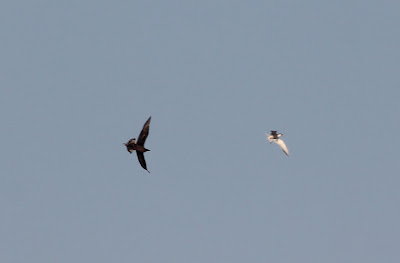 Continuing around Kurefjorden it was clear that spring wader passage is nearly over with just 9 Greenshank (gluttsnipe). Passerines were decent though with two male Red-backed Shrikes (tornskate) and single singing Marsh Warbler (myrsanger) and Thrush Nightingale (nattergal). Four local Buzzards were also in the air.

A whistle stop trip around Maridalen revealed the male Red-backed Shrike and a single Wryneck (vendehals) and alarm calling thrushes enticed me into the small wood with the Tawny Owl (kattugle) nestbox. When I entered the wood a bird started calling and it was sat right out in the open until I lifted the camera when it moved higher up. I assume the young are ready to leave the nest soon and the adults are nervous (the young have also recently been ringed which may have caused them some anxiety).