The snow turned to rain this morning and it was a pretty grim day. I thought that a trip to Kurefjorden might result in a good number of birds that had escaped ice bound inland waters. Well, there were considerably more Mallard (stokkand) than there have been but otherwise there were fewer birds than last week with no geese and fewer sea ducks. There were still two Rough-legged Buzzards (fjellvåk) on the islands and offshore at the mouth of the fjord highlights were a distant Great Northern Diver (islom) and a Little Auk (alkekonge).
My Great Grey Shrike (varsler) radar seems to be working again with two birds located today but the Hawk Owl radar is definitely not picking anything up.
I toured an area of Oslo where five Pine Grosbeaks (konglebit) were seen yesterday but only managed to turn up many Fieldfares (gråtrost) feeding on apples although there was a nice line of berry trees which whilst birdless this time will be worth checking later. Maridalen was also pretty birdless today.
Lagt inn av rixy kl. 21:19 No comments:

Email ThisBlogThis!Share to TwitterShare to FacebookShare to Pinterest
Etiketter: Kurefjorden

Today was a day of minus temperatures, blue skies, no wind and perfect light. Only trouble was I couldn’t find the Grosbeaks again. I checked many places and walked two hours in 30cm deep snow in the forests but didn’t find any. It was strangely quiet with absolutely no finches not even overflying Siskins (grønnsisik). The forests didn’t reveal anything else (no grouse or woodpeckers) except a group of three Long-tailed Tits (stjertmeis)that were suddenly right by me and then just as quickly gone leaving me with this one slightly out of focus picture. The white-headed Scandinavian birds really are smart!

One of the feeding stations in Maridalen has now quite a few birds including this Crested Tit (toppmeis) which I captured whilst eating and you can see its toungue whilst it discards the shell of the seed. Also three Red Squirrels here which always make a nice subject. 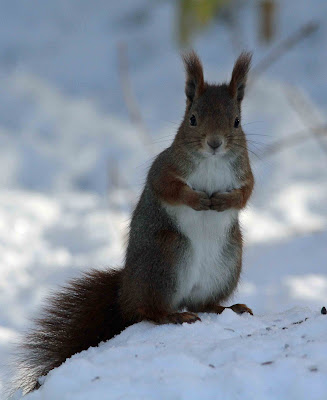 On Maridalsvannet the Whooper Swan (sangsvane) family is hanging on and gave some nice pictures in challenging light. 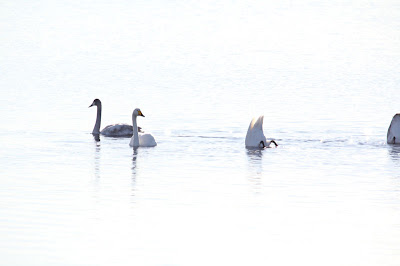 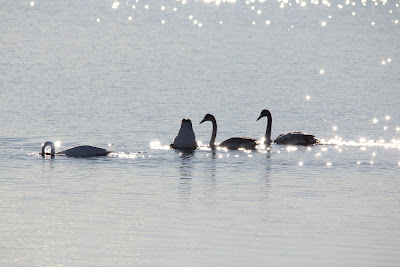 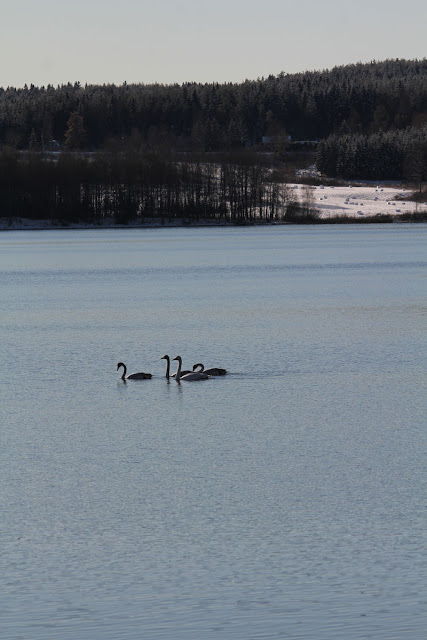 Just one of those AMAZING days!

The snow came last night and it kept snowing all morning. Wet, heavy, slippery snow – the worst type to drive on. I braved it though and drove up into Maridalen. The main road was OK as it had been ploughed but as I drove up Greveveien the car had more and more problems and in the end I whilst going slower and slower up a small incline I decided enough was enough. Using the incline I was able to reverse 300 metres and turn the car and with a bit of determined driving get back onto the main road.
I was keeping my eyes peeled on birds in the roadside trees as I was searching for something red. A flock of 12 Bullfinches (dompap) was nice and there was quite a lot of red but they weren’t what I was looking for. Gamle Maridalsvei had just been ploughed so I decided to try here. Halfway along there were a couple of birds high up in a birch tree. Surely more Bullfinches but they looked on the large size. Through the bins from a distance one also looked a bit orange. Driving closer and YES, not just two but five PINE GROSBEAKS (konglebit). Finding them high up feeding on birch buds was not how I expected to find them but hey, who cares! They were entirely silent (unlike the two birds Kjetil had yesterday) and stayed high in the tree. This combined with falling snow and bad light meant the pictures are nothing special. But for my first sighting in Maridalen I can’t complain and hopefully there will be further opportunities to get to grips with these beauties. There were two adult (red) males, one young male (orange) and two females.


On Maridalsvannet there were 13 Common Scoter (svartand) and 11 Goosander (laksand) although in the afternoon when I visited again I could not find them so there is a lot of movement going on. Also on my afternoon visit I had a fine Pygmy Owl (spurveugle) which had its eye on a flock of Yellowhammers (gulspurv). It was not the hoped for Hawk Owl but still nice. My dream scenario right now now would be to get an awesome picture of an owl (any owl will do) capturing a male Grosbeak in Maridalen!

But the day was not just about Maridalen. Oh no!

I dropped into Fornebu hoping to see if there were any Bearded Tits (skjeggmeis) and during a 10 minute break in the snow I had three birds down to 5 metres and some great pictures. The pictures of the male show how it gets its name – it is one of the few species where both the English and Norwegian names mean the same. 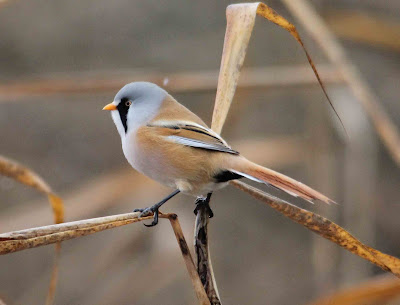 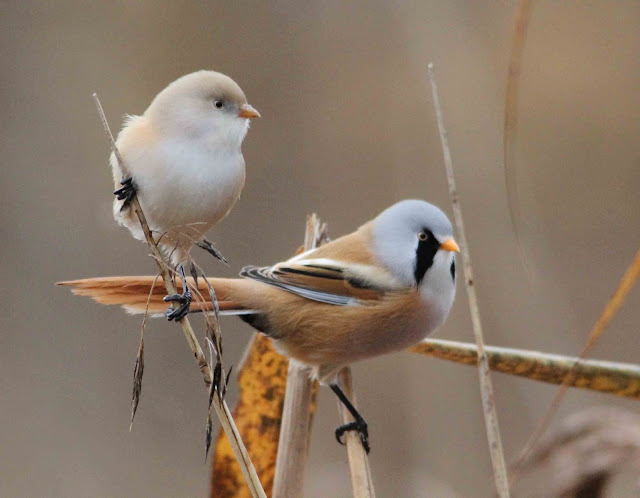 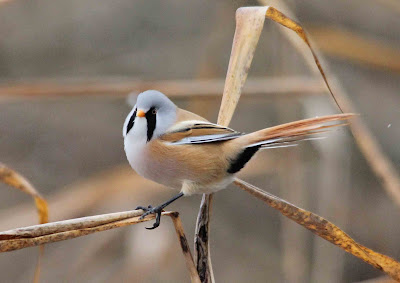 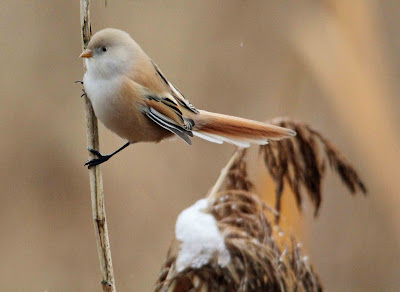 I also stopped off in Sandvika to add Scaup (bergand) to my Akershus year list and saw the young female in a snow storm. Also here a Little Auk (alkekonge) briefly showed at ridicously close range under a jetty before diving and resurfacing 100metres away under a motorway bridge!


Back home a flock of 80 Waxwings (sidensvans) flew over – maybe they will bring some Grosbeaks with them into the city.
Lagt inn av rixy kl. 22:28 1 comment:

The early bird gets the Pine Grosbeak

Unfortunately I wasn't that early bird. Instead it was Kjetil Johanessen who was up at the crack of dawn hoping for Pygmy Owls (spurveugle) in Sørkedalen but instead had two Pine Grosbeaks (konglebit). They were still present and very noisy when he left but by the time I hauled myself out of bed and got there they had moved on. There were a number of other records of overflying birds further north in Akershus today so it looks like some numbers will soon turn up. This is one of my favourite birds and one I have only been lucky enough to see in Finnmark so I really hope to catch up with some around Oslo.
Also today a number of Little Auks have turned up in the inner Oslofjord so they are also on the move. It is probably related to the cold weather that is now upon us with temperatures down to -8C last night and snow forecast tonight.
I did have a reward for my troubles today when I dropped in at Maridalsvannet and had a Scaup (bergand) which is a patch tick for me.
Lagt inn av rixy kl. 20:51 No comments:

Friday’s attempt at finding Hawk Owl didn’t turned out as intended despite us driving many tens of kilometres of forest roads. We didn’t see much else either with no crossbills (nor Pine Grosbeaks (konglebit) which look like they might be about to appear in good numbers). Not a single Great Grey Shrike (varsler) either and a stop at Hellesjøvannet didn’t give much with a single Water Rail seen by chance through the scope along the edge of the reeds the highlight.
Waxwings (sidensvans) are continuing to arrive with four over the house today. On the garden feeders also a Nuthatch (spettmeis) and six Tree Sparrows (pilfink).
A family outing to Østensjøvannet in Oslo gave me my 149th species in Oslo this year in the form of a Little Grebe (dvergdykker). I saw it first in flight and must admit I struggled for a while to identify it – it is not often you see Little Grebes flying! Also here a few Great Crested Grebes (toppdykker), four juvenile Mute Swans (knoppsvane) who have been left to their own devices by their parents, a late Moorhen (sivhøne) and a few Coots (sothøne), Tufted Ducks (toppand), Goosander (laksand) and Goldeneyes (kvinand).
The last two nights have seen heavy frosts and there was ice around the edges of Østensjøvannet still in the afternoon. Snow is forecast tomorrow night so winter is fast approaching.

Today I spoke to my eldest daughters class about birds for a full hour and a half. They have had a project on birds so they were very happy to have a real life "bird expert" to talk to them. My presentation was called "Gleden av fugler" (The Joy of Birds) and hopefully there will be a few more youngsters to swell the (small) ranks of birders in Oslo. 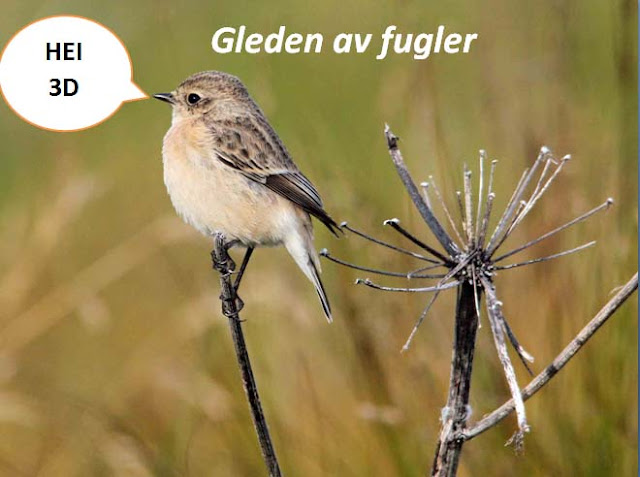 I squeezed in two visits to Maridalen either side of the presentation. Finally there are sone ducks on the lake. In the morning there were 9 Goldeneye (kvinand) and 11 Common Scoter (svartand) and in the afternoon the Common Scoter flock had risen to 18 and the Whooper Swan (sangsvane) family were also present. I have seen Common Scoter on Maridalsvannet a few times before but never more than 4 birds together so 18 was a pretty good flock. They were actively moving around the lake but were not diving very much so I guess there is little food for them here and they will be gone tomorrow.

The Hawk Owl (haukugle) was reported again today so looks like it had survived the cars. Tomorrow Rune and I are going to go exploring the forests where we saw the Tengmalm's Owls (perleugle) and will hopefully find Hawk Owl here.
Lagt inn av rixy kl. 20:42 No comments:

Today saw me in Østfold again and today in the pleasant company of Per Buertange. We tried unsuccessfully for the Hawk Owl (haukugle) and no one else has reported it today so it has probably moved away, or maybe passed away. .....yesterday, it was apparently nearly hit by cars on a couple of occasions as it hunted voles right by the side of the road. Slight compensation was provided by a Great Grey Shrike (varsler).

We moved onto Kurefjorden where little wind and good light gave us good views of the resting wildfowl and grebes although as usual it was ‘scope views only so no pictures. On the way a stop to scan fields gave us a juvenile Peregrine (vandrefalk) taking a Fieldfare (gråtrost) and then devouring it on the ground.
Amongst 50 or so Great Crested Grebes (toppdykker) were 12 Slavonian Grebes (horndykker) and a single Red-necked Grebe (gråstrupedykker). Seas ducks highlights were 90 Common Scoter (svartand), 28 Velvet Scoter (sjøorre) and nine Scaup (Bergand). Amongst 500+ Greylag Geese was a single, probably 2cy, White-fronted Goose (tundragås). Whilst watching this in the ‘scope I saw three orange birds land in the reeds behind it. Focusing on the reeds I realised they were Bearded Tits (skjeggmeis) and five then flew out and landed again a couple of hundred metres away!

At the mouth of the fjord the islands held 3 Rough-legged Buzzards (fjellvåk), all perched and presumably having no problem getting food. A nice surprise was a flock of 100 Snow Buntings (snøspurv) briefly in flight over one of the offshore islands.

I didn’t visit Maridalen today so it was a bit annoying to see that a Short-eared Owl (jordugle) was seen which would have been a patch tick for me.
Lagt inn av rixy kl. 21:32 No comments: