Today was THE big Pink-footed Goose day over Oslo. A new record was set with Anders noting over 16,000 from Fornebu. I was in Maridalen and did not accurately count the flocks I saw but had in excess of 10,000 in the morning and then had more from the house in the afternoon.

Even though winds over Oslo were not particularly favourable for northward migration they had apparently been from the south in Denmark which was enough to send the geese on their way.

As is often the case on these big PfG days remarkably little else is noted migrating despite so many people gazing skywards for so long. I had 17 Barnacle Geese which I heard migrating with the Pink feet but did not see in the field. Pictures I took of the flock after hearing them though revealed the Barnacles. A Snow Goose also turned up with resting PfG further north in the afternoon so that escaped me and I would bet good money there were also a few Tundra Beans and White-fronted Geese mixed in. I had a single flock of 7 Greylags but they may have been local birds.

No Cranes, no Cormorant and 2 Sparrowhawk were the only raptors!! 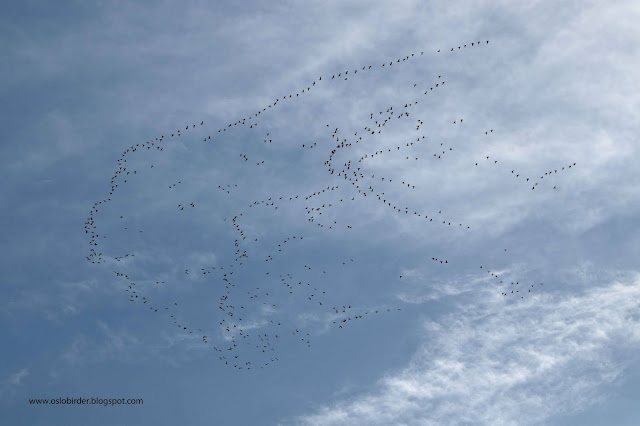 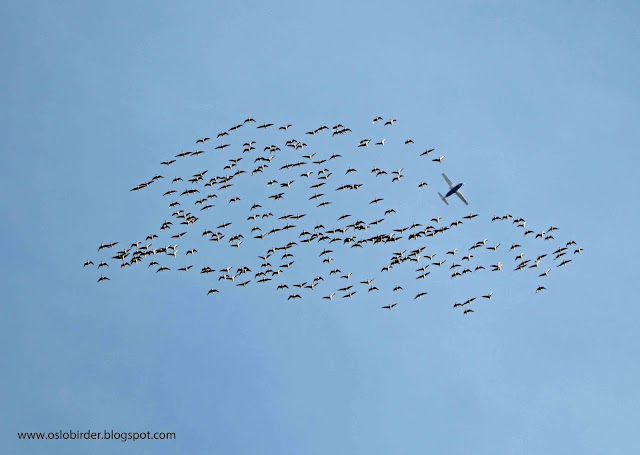 Two good birds for the Dale

This morning’s Maridalen dog walking in continued cold northerly winds was a quiet affair save for 2 very good local birds. I noted only 6 birds flying north of which four were Wood Pigeons but the other two were ones that I do not see every year in Oslo although now is exactly the right time to find them. First up was a White-tailed Eagle which is only the 8th I have seen in Oslo of which 7 have now been in Maridalen and six of these have been in March or April. I picked up the eagle just after I had been musing to myself that there really should be some raptors to see despite the weather (it was the only one I saw) and it was coming towards me but still at such a long distance I could not see it with the naked eye. I took a couple of crappy photos and then decided to move 30m to the otherside of a couple of trees such that I would not have an impeded view when it ended up coming closer – but I never refound it!

After this I heard the call of a Rook and eventually located an all black corvid flying north at long range. My photos will just about count as a record shot. This is my 6th Oslo and Maridalen record of which four have been in March or April.
Otherwise the Smew remains on the lake and the fields were brown, dry and devoid of birds. The unfavourable whether is forecast to continue for the next 10 days although a shift to southerlys next week might help things. What we really need though is rain.

A return to cold northerly winds today seemed to put a complete stop to migration. The Beast, Mrs OB and myself went on a marathon walk in Maridalen and saw VERY little. Two male Gadwall which had been discovered yesterday by David Houle were a very clear highlight though and were only the second record on the lake with the first being of a single male on 20 April 2014.

Otherwise the Great Grey Shrike showed well although briefly and a single Mistle Thrush was the only thrush sp. I noted. I had two sightings of adult male Goshawks which were probably the males of both the pairs in the valley. At one of the territories they are building a new nest. Territories usually have more than one nest and they can change nests between seasons. I assume the reason for multiple is because their nests are often prone to falling down due to being built on quite thin branches in spruce trees and building a new nest takes a long time and also that a nest from the previous season is so full of shit that grass often grows up. In the territory where they are building a new nest they only had two existing nests to choose between. They previously had three but the nest they used in 2018 was destroyed the following winter when the tree fell down in a storm. They nested successfully in 2019 in a nest that was already faling apart and their other nest doesn’t look that sturdy so I assume they have decied they need to get their act together. I cannot see that the new nest will be completed in time for this season though. 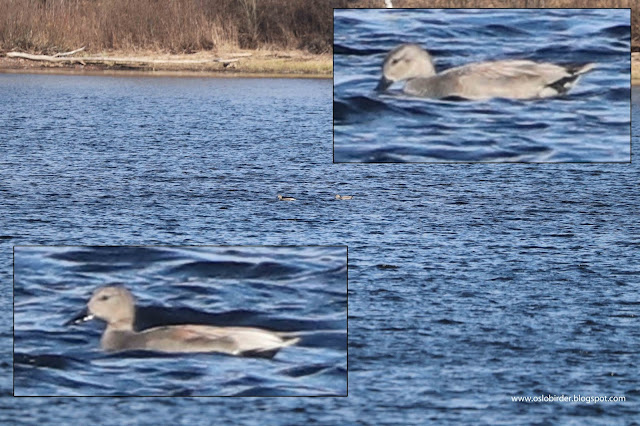 Today’s action in the Dale was similar but not same same to yesterday’s. There were more Redwings, Starlings and Dunnocks but fewer Mistle Thrushes. Pink-footed Geese also migrated through in decent numbers (I had over 600) and a couple of flocks landed on the lake and one of these contained 10 Barnacle Geese which I assume are proper wild birds on their way to Svalbard. Also on the lake and the sighting of the day was a Red-throated Diver. This is the earliest record in Maridalen and also only the second ever record in Oslo in March.

Goldcrests have been noticeably common during the whole winter with the mild temperatures undoubtedly being beneficial for them and now they just seem to be everywhere as they search for newly hatched insects. I am hoping to find a Firecrest amongst them… 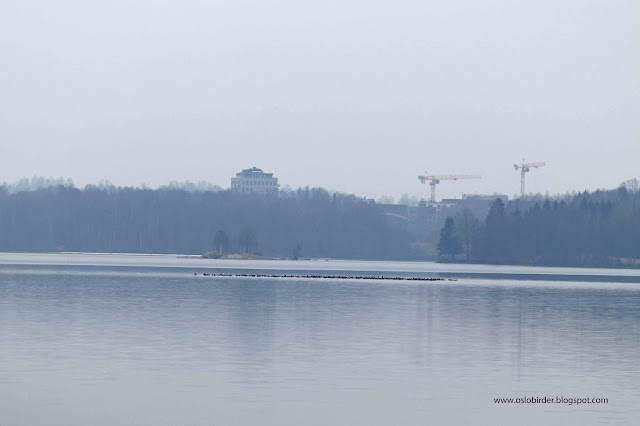 I felt guilty after playing away from home yesterday and showed Mari my love this morning. I finally see having the dog as an advantage now because he gives me a legitimiate excuse to be out (in these Corona times) and also forces the rest of the family out. Exercise and fresh air cannot be overrated.

Today started overcast and in Maridalen the tops of the surrounding hills were in the cloud. During spring migration this is good conditions for seeing migrating birds (although rain would have been even better) and Maridalen did not disappoint. There were no big movements of passerines to witness (although my start after 9am would have been after most viz mig had finished) but there were many more birds than there have been. I first noticed that there were more Blackbirds then I became aware of Mistle Thrushes, first a singing bird but then birds migrating north (with one of these also singing) and then finding birds feeding. I counted around 30 birds in total. Amongst the Mistle Thrushes and Starlings were also my first Redwing and Song Thrush of the year. Linnet and White Wagtail for also new 2020 and fly over Snow Bunting and Twite were new for Oslo. So, lots of new species even if there were no big flocks.

There was non-passerine Viz mig though with small flocks of Wood Pigeons (although maybe they are a passerine?) passing north, Pink-footed Geese and Cormorants. I first picked up a tight flock of Cormorants on the lake. This species is common in small numbers feeding during the summer months and these birds are of the continental race sinensis which now breeds in Southern Norway. A flock early in the spring though will be birds of the nominate race carbo. These birds are heading to their breeding areas off the coast of Northern Norway and some birds fly up the Oslo fjord and then overland. It is always interesting seeing these birds which normally migrate in flocks of 10-30 birds. When they reach the end of the Oslo fjord they are clearly unsure of where to go and often spend a long time flying around in circles before eventually heading north. Today’s flock was typical of this behaviour. Seeing on them lake (rather than migrating over) was a first though and was clearly a result of the low cloud. As the cloud began to lift mid-mornng they took off and spent 20 minutes flying in irregular loops around the valley with much stalling and changing of direction before eventually heading off in a northerly direction. With the Cormorants it seems that they lack a clear leader whereas Pink-footed Geese seem to know exactly where they are going. Whilst the Cormorants were faffing around a flock of 150 Pink-footed Geese arrived from the south and flew purposesfully past them and headed directly north. Another 2 flocks passed soon after giving 440 birds in total.

On the lake the female Smew was still present and 4 Teal were the first for the year. 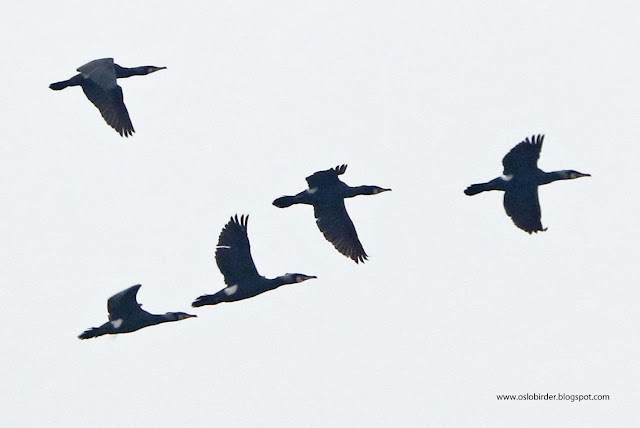 Today I only managed one visit to Maridalen and that was dog walking after dark but even that turned up trumps with two Woodcock flushed from the side of the track where they were presumably feeding.

I did however visit both Østesjøvannet, Fornebu and Bygdøy earlier in the day even though I had not planned to do any birding. Østensjøvannet was full of activity. Hundreds of noisy Black-headed Gulls were back at their breeding colony and Great Crested Grebes and Coots were displaying. There were Wigeon, Teal, Goosander, Whooper and Mute Swans, 3 species of geese and best of all a female Smew and a male Pochard.

My visit to Fornebu was a quick twitch to see a Brent Goose which is a rare species in these parts and a quick stop at Bygdøy on the way home revealed a Lesser Spotted Woodpecker.

I really did take rather a lot of photos today... 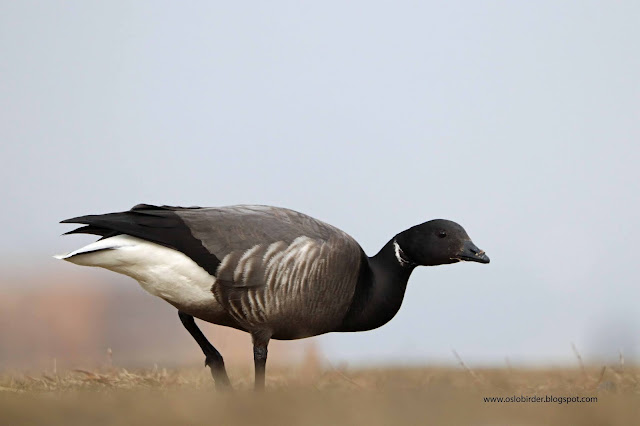 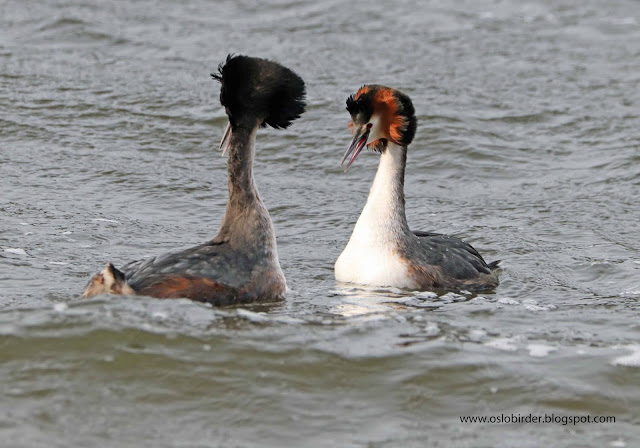 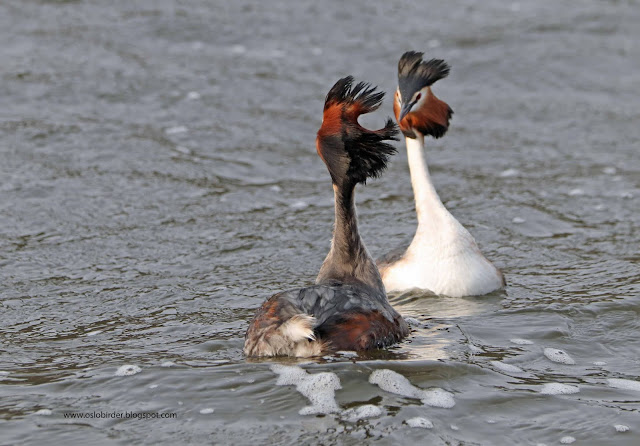 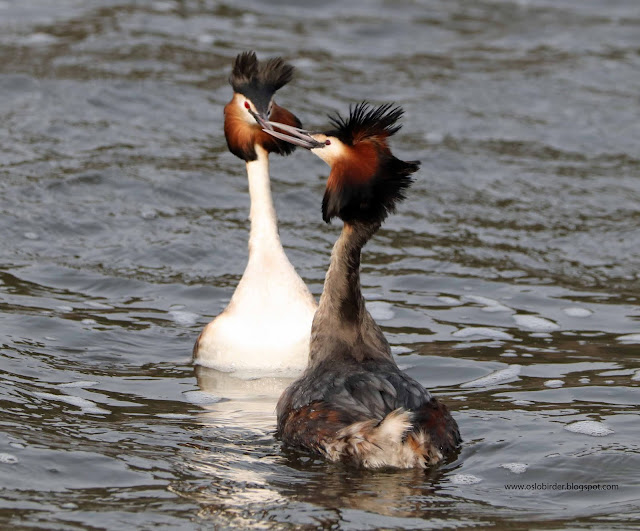 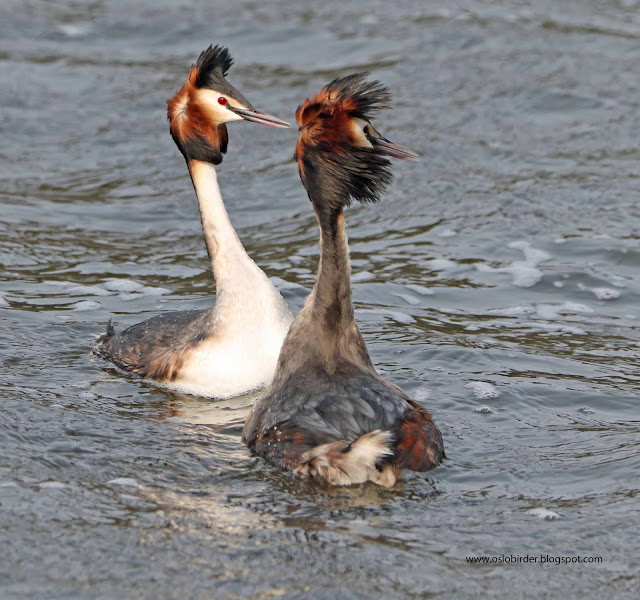 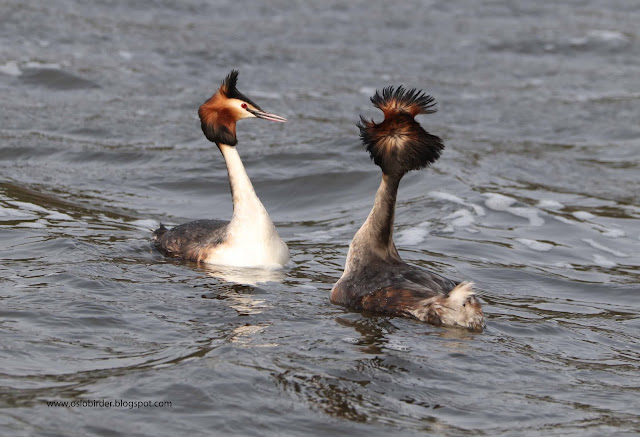 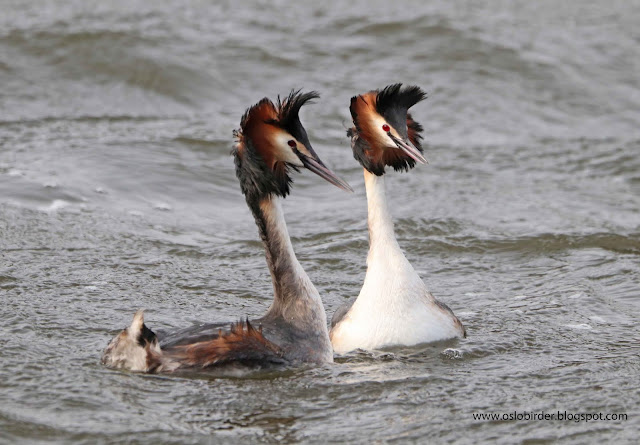 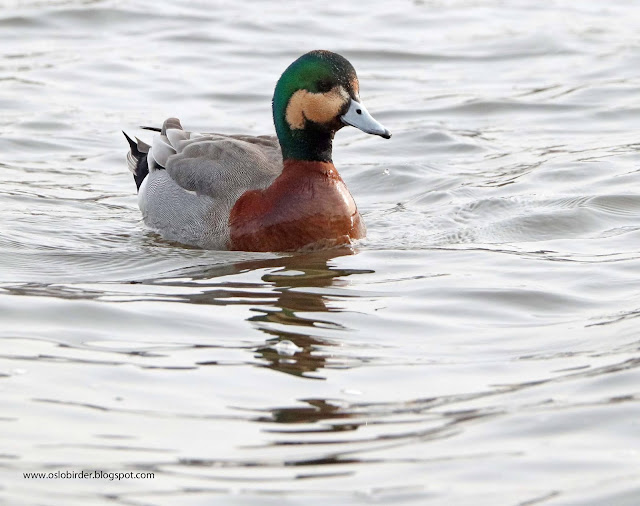 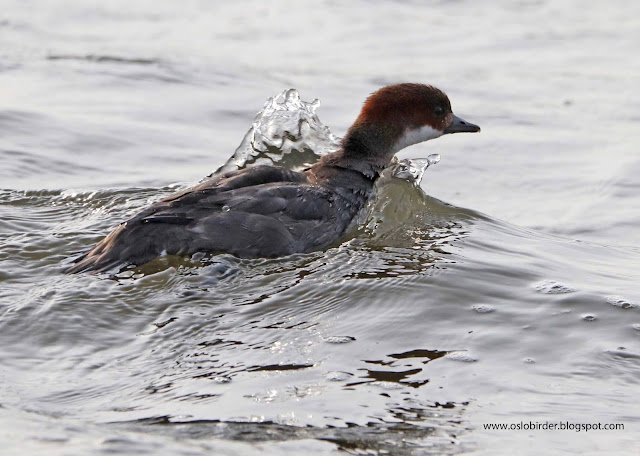 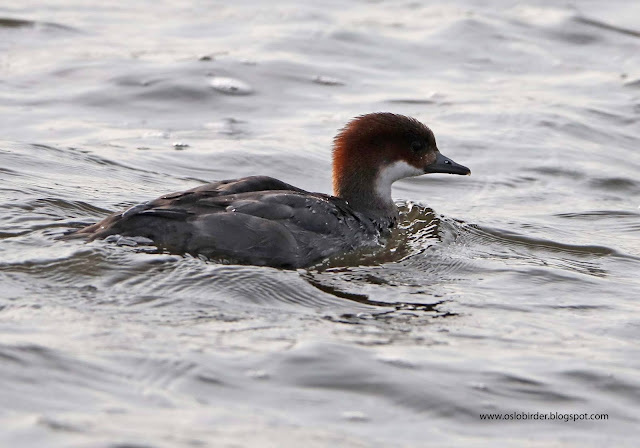 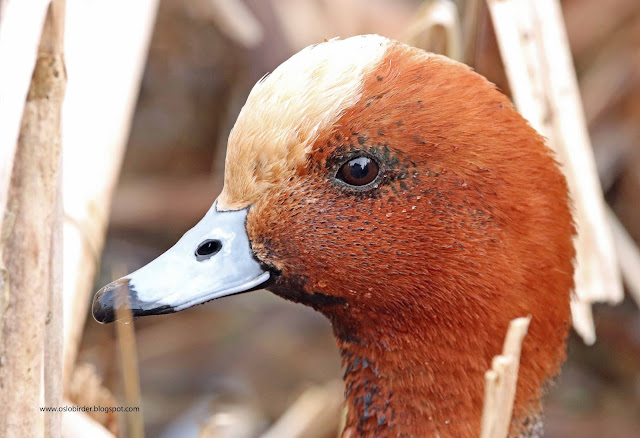