Spring coming and Bean Geese too with luck

The first two months of 2013 have now passed and winter is finally loosening its grip on Norway and the heat of the sun is now noticeable during the day although the nights can still be bitterly cold.

My year list so far is only 97 species compared to 117 at the same time last year. I was probably a bit more focused on my year list in 2012 whereas this year I have not used so much effort on species I know I will see easily later in the year but the difference also reflects the fact that there was much greater variety last winter. Last year for example I had three species of diver but none this year and last winter was milder so there were more scarce wintering species which have been absent this year.

March will see a number of new species and I am looking forward to the geese and swan migration which will start around mid month and hopefully I will catch up with the Bean Goose (sædgås) flock again. Last year I was lucky enough to read the neck rings on some of these birds and they turned out to be from the small and isolated Scottish wintering population, see here. The birds had been ringed to find out their migration route but most importantly their breeding grounds. Unfortunately my sighting was the only record outside of Scotland so the riddle has not yet been solved. This winter though Carl Mitchell from WWT has mounted GPS tags on four birds in Scotland so they should be able to solve the riddle once and for all.
The birds have already left Scotland and are currently fattening up in northern Denmark. Their locations can be followed on this website. Fascinating stuff!

Today made me judge my sanity. With the intention of arriving at Krokstrand at around 3pm to watch HMS St.Albans sail past (she is a British frigate captained by a friend of mine and on a visit to Oslo) I thought I would drive the scenic route there. This took me through Oppland, most of Akershus and a good chunk of Østfold with nothing of any interest bird wise to show for it. The only thing of any ornithological interest that resulted from my travels was that I could confirm there has been a mass exodus of the wintering Hawk Owls.

I arrived at Krokstrand at 1505 in just the nick of time as the boat (or is it a ship?) was offshore at, in seawatching terms, 12o'clock. A few minutes later and I would have missed her which would really have rounded off a miserable day. In the end though I was able to watch it steaming north into the mist and being dwarfed by the Colour Line Danish Ferry coming out of the mist towards it.

Some birding salvation came in the form of the Frogn schoolyard Hawk Owl surprisingly still present although perched on a very distant spruce.
Then getting home and picking up my youngest I thought that the birding day had been really saved when I had a close flock of Waxwings (sidensvans) feeding on rotten apples but the camera refused to shoot when they were low and close in the apple tree but worked fine when they took refuge high up with the sun behind them. Not my day... 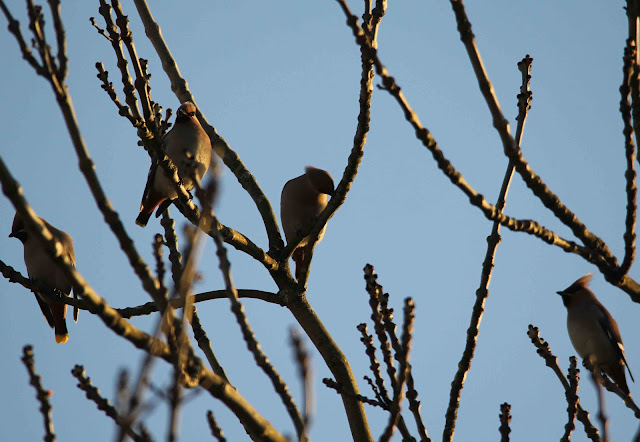 After yesterday’s owl fiasco I decided to return this evening to have another go. Per Buertange confirmed my theory of yesterday by telling me that at this time of the year the owls often sing only just after dusk especially if it is cold and then go silent. This doesn’t explain why the NOFOA trip on Saturday night had birds singing all through the night but did at least give a good explanation for why Per Christian and I had nothing yesterday from 8pm onwards whilst Jonas Langbråten scored before 8pm.
The conditions today seemed pretty much the same as yesterday so what was different? I left the house 30 minutes earlier than yesterday which meant I arrived in owl habitat at 1930. I also went in from the north via Årnes so started with the area where Jonas had his owls yesterday. The result: I had 11 singing Tengmalms’s Owls (perleugle)!!!! Ten in Akershus and one in Hedmark. I also had two birds still going strong at 2130 in a duet and the last bird was a distant one at 2155 at one of the sites we spent a long time at yesterday. So yesterday I was obviously just jinxed by Per Christian. It really is difficult to see what was different between the two days but today was fantastic!
The first eight birds I heard were all fairly distant and I was still searching for a close bird so I decided to explore some news roads. Just as I crossed the border into Hedmark at Øysjøen I had a bird right by the road. Using my head torch I was able to find it perched high up in a spruce with the eyes reflecting the torch. Through the bins I was even able to see the bird – my first visual of a Tengmalm’s apart from the trapped birds. I tried taking pictures but only managed to get the reflection of the eyes and the video also didn’t capture the bird although the song is easy to hear.

After this my hands felt like blocks of ice so I headed for home rather than continue along the new road although I expect I would have added many owls to my tally if I had continued.

I heard some howling but there was also barking coming from the same location so assume I heard a dog rather than a wolf. No other owl species for me but I feel the need to explore the dark forests of Hedmark soon for Ural (slagugle) and Great Grey Owl (lappugle).

Earlier in the day I picked up my first Wood Pigeon (ringdue) and Hawfinch (kjernebiter) for the year near Sognsvann whilst trying unsuccessfully for Grosbeaks. I also had a quick trip to Drøbak and drew a blank on Hawkie but did find the overwintering Little Grebe (dvergdykker).
Lagt inn av rixy kl. 00:41 1 comment:

To(not) wish upon a shooting star

Per Christian and I had been planning a nocturnal owl trip and eventually decided upon this (Sunday) evening. The weather forecast (and reality) was perfect. A near full moon, cloudless sky and hardly a breath of wind. On top of this the local bird club had an outing last night and had 10 Tengmalm's Owl (perelugle), 4 Pygmy Owls (spurveugle) and 2 Tawny Owls (kattugle). Our destination was the same, which was the Mangen forests in Aurskog-Høland.
The moon was very bright and lit up the snow covered forest, countless stars shone and a shooting star whizzed through the sky. I really should have made a wish though...

Because despite the seemingly perfect conditions and the knowledge that owls were there we did not hear a single owl!!! We did hear a fox and some dogs and could possibly have heard a Pygmy Owl at the furthest limits of the human ear but it was baffling that we didn't score. We didn't even hear the wolf pack that inhabits these parts. To make matters worse I see that just a little but further north of where we were (and where we would have gone if we had more time) that 5 Tengmalm's were recorded between 1900 and 1945. The timings of the observations may be the important thing here. We did not arrive in prime owl habitat until after 2000. Perhaps the owls all sang early tonight for some reason and then got down to hunting??

I also tried Maridalen after dropping Per Christian off but drew an owl blank for the fourth time this year.
Lagt inn av rixy kl. 00:04 2 comments:

After a week of involuntary abstinence I awoke this morning with a headache and an uneasy feeling over my whole body. I needed a fix. With little time available I headed for the safest dealer I knew (the Frogn schoolyard dealer). Couldn't find him. Tried another (Nordre Furu). Nowhere to be seen. I was getting desperate. I drove around aimlessly hoping I would find another dealer. Nothing doing though. Turning around I desperately hoped that I would find something on my way back. Stopping at the school I desperately looked around for the familiar shape of Hawkie. And yes, there he was. But why was he just looking at me from a distance? My money not good enough for him? I had to take what was on offer but cannot say that it was much of a hit.
There was a lot of bird song today: Greenfinches (grønnfink), Blue and Great Tits (blå og kjøttmeis) and Tree Sparrows (pilfink) were particularly vocal and at home a Blackbird (svarttrost) was cautiously singing.

Hawk Owls are turning up in flocks in Hedmark with groups of three birds being reported at a couple of places. The chances of breeding close to Oslo looks to be high.
Lagt inn av rixy kl. 22:22 No comments:

Some birding of sorts

Finally some birding although the eight year old who accompanied me has now decided that she is not at all interested in birds so I wasn’t able to stay particularly long at any one place.

We started at Linesstranda near Drammen where some of the locals provide a great amount and variety of food for wintering birds. This has resulted in a good selection of overwintering birds including a Bearded Tit (skjeggmeis) in the reedbed (although as far as I know this has not come to food). I was hoping for some great views of the Bearded and Long-tailed Tits (stjertmeis) but neither showed for us whilst we were there. A Robin (rødstrupe) was my first of the year though – this winter they seem to have been very scarce. There was a lot of bird song in the woodland here mostly from Siskins (grønnsisik) and Bullfinches (dompap) – a positively spring feel was in the air.

Moving onto Horten I easily found the overwintering Mistle Thrush (duetrost). It is exceptional that they overwinter but this one has found a good supply of mistletoe berries to keep it going.

At Presterødkilen in Tønsberg we heard a couple of Bearded Tits in the reedbed but failed to see them and at nearby Jarlsø there were four Little Grebes (dvergdykker).

I tried for two Hawk Owls during the day but failed to find them.   Recent increase in records in hedmark and Oppland counties could be a sign that birds are moving north looking for suitable breeding sites.