The day before the clocks change and it was really gloomy. Low dark cloud and rain all day meant that it never really got light - we had to have the lights on in the house all day. I tried some half hearted birding cum car driving in an attempt to find Pine Grosbeak which are now invading norway. I checked out areas with berry trees that I know of with no luck. I did find about 50 Waxwing, a Redwing and a Nutcracker though. Later on a drive around Maridalen revealed a Cormorant, Tufted Duck, 2 Goldeneye and 8 Mallard on the lake and in the fields 300+ Fieldfare, 1 Brambling and a couple of Yellowhammer.
Lagt inn av rixy kl. 17:31 No comments:

Today I travelled with Per Christan Moan to particpate in the NOFOA autumn trip to Aurskog Høland. We left Oslo at 0730 whilst still dark and as we made our way to the meeting point at Fetsund it slowly became light revealing a frost covered countryside that didn't look particularly conducive to a goods day birding. After meeting up with the 15 or so other keen birders we drove on to our first stop of Haneborg. Along the way there were many Roe Deer although still few birds. At Haneborg there was no flooding and just bare fields with a Sparrowhawk overhead and a tailess Meadow Pipit in a field. Next stop was Kjelle where there was some flooding but it was all frozen so no waterbirds! A Great Grey Shrike here was the highlight of the trip along with fly over Waxwing and Goshawk.

Onto Bjørkelangsjøen where there was open water but no birds! A flock of 11 Long Tailed Tits errupting out of nearby were as always a good record.

On the way to Hellesjøvannet was a flock of 120 Canada Geese and 3 Whooper Swans in roadsode fields. Whilst watching these we picked up a distant Buzzard and another 4 Whooper Swans flew over. At Hellesjøvannet there was only ice around the edges but again few birds. In the fields were 10 Whooper Swans with 15 Canada and 1 Greylag Goose and on the water a Tufted and a handful of Goosander. Around the edges were 2 Snipe and a Reed Bunting. By now a northerly wind was blowing across the flat farmland and it was getting cold...very cold. A little walk and some food managed to warm me up a bit.

Final stop of the day was Hemnesjøvannet. At various stops around the lake we had a flock of 50 or so Starlings, another Buzzard, 300 Grelags, 4 Coot, Great Crested Grebes, Goldenye, Whooper Swan and Greylag Goose.

Autumn feels like it is nearly over. There will be probably be little productive birding in the coming months although records from further north in Norway and in Sweden suggest that an invasion of Pine Grosbeaks may be on the way which is a much needed tick.
Lagt inn av rixy kl. 19:56 No comments: 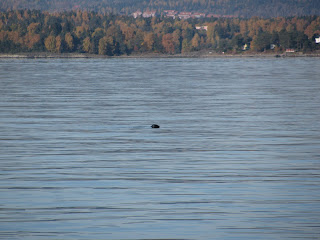 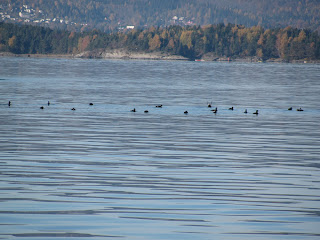 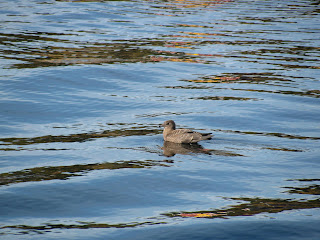 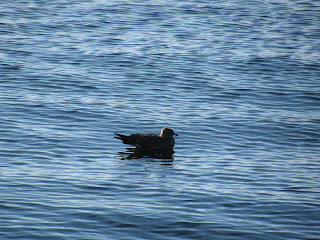 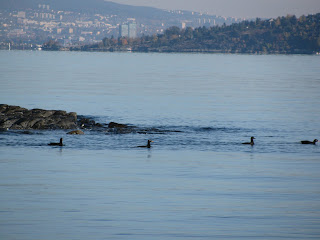 Today was the annual boat trip in the Oslo fjord organised by the local birding society (NOFOA). The weather was lovely, sunny and no wind which unfortunately was not too promising for birds but as it turned out the day was a big success. There was a good turn out with at least 30 birders and I had my eldest daughter with me.
Highlight of the trip was a skua which I was lucky enough to find but took a long time to identify despite it sitting on the water less than 10 metres from the boat. Problem was that it didn't want to fly! Eventually it did fly but then away from us. However we were lucky enough that someone took a couple of hundred (!) pictures of which a couple captured the underwing including the diagnostic double white flashes (before seeing these pictures I had proclaimed with certainty it was an Arctic! - we live and learn). Studying the my own pictures of the bird on the water also show it has dark tips to the primaries which further distinguish it from Arctic which pas pale tips.
2 Little Auks were also great birds and unexpected in such calm weather. 3 Red Throated Divers, a Long Tailed Duck, 1 Common Scoter, 30+ Velvet Scoters, 3 Purple Sandpipers and 2 Dunlin complemented the common species such as Eider, Red Breasted Merganser
We als had very good views of four seals (not sure which type) and jelly fish were quite numerous.
Lagt inn av rixy kl. 14:43 No comments:

A clear sign that winter is soon coming (in addition to be it -4C over night) was the sound of Waxwings flying over head yesterday. I didn't actually see them but heard them twice during the day along with Hawfinch.
Today is the annual NOFOA boat trip in the Oslo fjord. Apart from frost bite I'm not sure what we'll see this year as there have not been any southerly storms to push birds up the fjord recently.
Lagt inn av rixy kl. 08:43 No comments:

A walk around the local area turned up a few birds. The best bird was also one of the first: a Merlin dashing over the road in front of us. Flocks of Starlings andd Fieldfares were obvious as they fed on apples in the gardens, amongst them were as few Song Thrush, Redwing and Blackbirds. Finches were scarce but I saw a flock of 7 Bullfinch, a few Siskin and a single Chaffinch. Amongst a flock of Blue and Great Tits was a single late Chiffchaff. A calling Wren was an unusual sound this year after the cold winter cut the population to, I believe, under 10% of its level last year.
Lagt inn av rixy kl. 17:59 No comments:

A few days back in the UK included a rare 24 hours alone with the wife staying in Brighton. There was a constant stram of hirundines along the beach, mostly Swallows but also a few Sand Martins among them. Little else to see except a Sandwich Tern offshore.

It was still 20 celcius in the south of england and you got the feeling that autumn was aournd the corner with some yellow leaves on the trees. Back in Oslo with 8 degrees and the trees now golden there is no doubt autumn is here.
Lagt inn av rixy kl. 21:41 No comments:

An hours bike ride around Maridalen this morning gave me a little bit of exercise and a little bit of birding.
Birding highlights were 150 Greylag Geese, the family of Whooper Swans and an adult Black Throated Diver. A couple of distant black ducks were most likely Common Scoter and a group of 7 ducks that flew in and joined the geese were probably Wigen but by this time I was watching the geese at over 1km range. Around the lake were Fieldfares and Redwings, Yellowhammers and flocks of Tits and Goldcrests which seem to have had a good breeding season after being very scare this spring following the cold winter. A female Sparrowhawk flew across the road in front of me and a flock of 10 Jays was an unusual sight.
Exercise highlights were a massive 17km and a top speed of 45km/hour - Tor Hushovd should be afraid - very afraid.

I have just started feeding the birds in the garden again and already Blue and Great Tits, House and Tree Sparrows, Greenfinches and a Nuthatch have discovered the sunflower seeds. Nutcrackers are still in the area but will soon disappear as suddenly as they appeared in August.
Lagt inn av rixy kl. 10:56 No comments: