We have bid farewell to the mountains and are now back in Oslo.

The last couple of days in Beitostølen gave some good birds with an alarm calling Temminck’s Stint leading me to a well hidden and motionless youngster. A couple of noisy juvenile Merlins led me to their nest and 3 Siberian Jays showed well on a dog walk.

Mountain Fritillaries started flying in enormous numbers by the end of the week and my daughter picking up 30 dead ones (undoubtedly killed by cars) from a 50m length of road gives an indication of how many were on the wing.

Back in Oslo my focus is still on butterflies and I have decided to try to find out the distribution of White-letter (almestjertvinge) and Purple Hairstreak (eikestjertvinge) close to my house. White-letter is listed as Vunerable on the Norwegian red list and while Purple is not listed it is rarely reported and Oslo is at the northern limit of where they are known to occur. Both these species have previously been reported from Oslo before but very infrequently although the trees they lay their eggs on: elm and oak are numerous in gardens and parks where I live so I have always thought they should be around. I have normally been away from Oslo in July when they fly which might explain why I have not noticed them before but both species also spend most of their time in tree tops so are species one doesn’t normally just bump into. There are two other species of hairstreak in Norway and surprisingly enough I have actually seen both in the garden. Brown Hairstreak (slåpetornstjertvinge) is listed as Near Threatened and turned up one August whereas Green Hairstreak (grønnstjertvinge) is a common species in the forests around Oslo but not in the city (seen in May).

I asked for advice on Facebook as to how I could best find the species and was advised that White-letter at least could be found on thistles close to elm trees. Well, that hasn’t worked out for me (yet) but by scanning over oak and elm trees I have now found hairstreaks twice. It is only elms that have turned up trumps and two separate elms have had three small butterflies flying fast and erratically around them high up. Taking pictures to ascertain species has been difficult but at both trees I have managed to photograph two individual butterflies and in both instances they have been one each of the two sought after species! Quite why Purple should be flying around an elm tree with White-letter is a mystery to me but maybe butterflies attract each other and it could be the trees are especially rich in honeydew secreted by aphids and apparently the favourite source of energy for both species.

We now have two days of rain but the search will continue when it is dry and sunny again. Maybe as the season wears on the butterflies will fly lower down and nectar on thistles allowing some good photos. 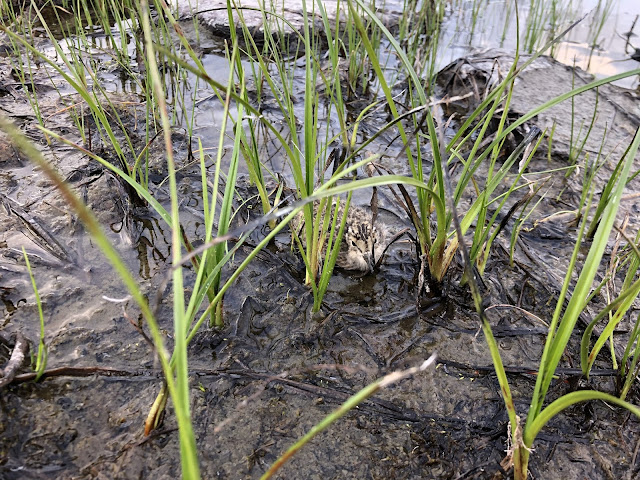 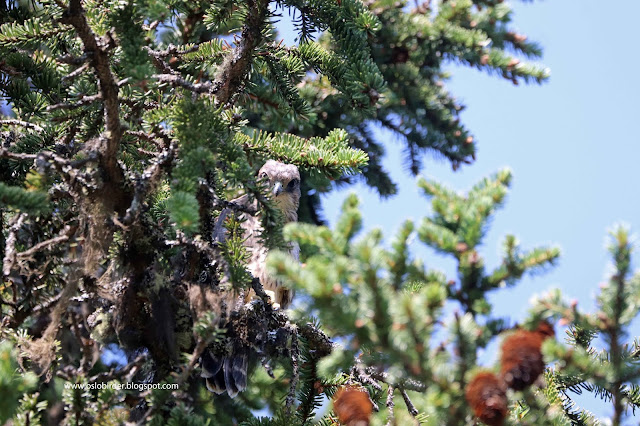 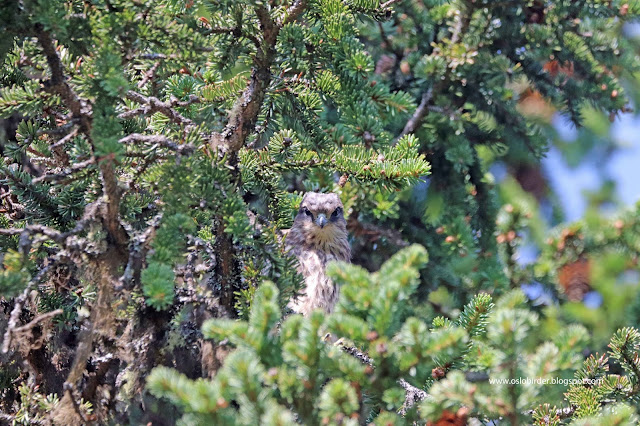 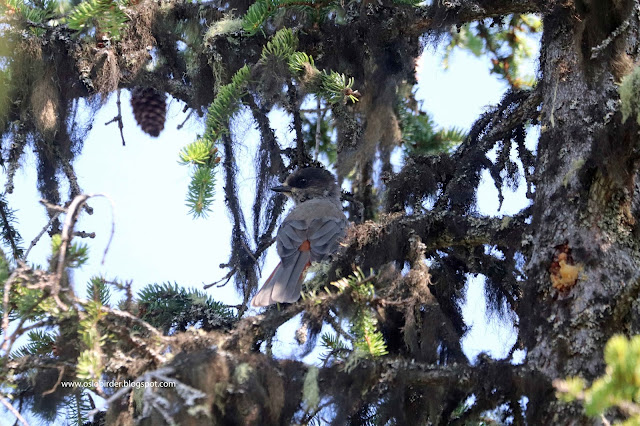 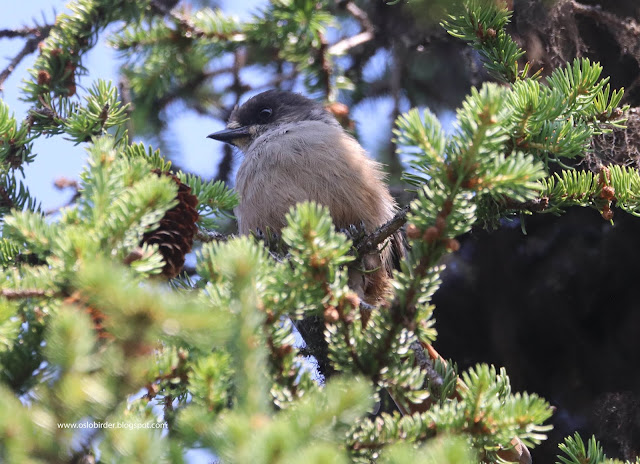 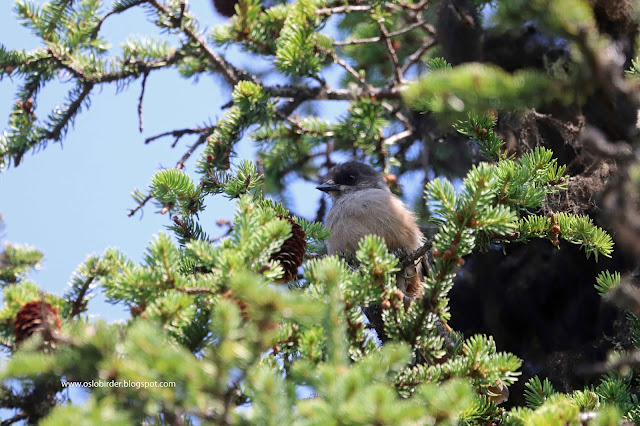 We have retuned to Beitostølen for another week. It is glorious weather here but far cooler than in Oslo.

I am far more in relaxation mode and have hardly even thought of raising my binoculars although butterflies are still gaining my attention. There are so many blossoming wild flowers here that butterflies can be encountered anywhere. Most of the species I saw 2-3 weeks ago are still present although in smaller numbers and looking worn and a few new species are also on the wing.

I have made one specific trip to look for Alpine Argus (fjellblåvinge) which was succesful and is yet another new species for me (my 59th in Norway). Despite it being warm, sunny and windless they were  not in flying mode but I saw 4 individuals in the end. I have also seen a number of Mountain Fritillarys (fjellperlemorvinge) although telling them apart from Cranberry Fritillarys (myrperlemorvinge) that fly alongside them is a challenge. Silver-spotted Skippers have proven to be common and I now have the good pictures that evaded me last time. 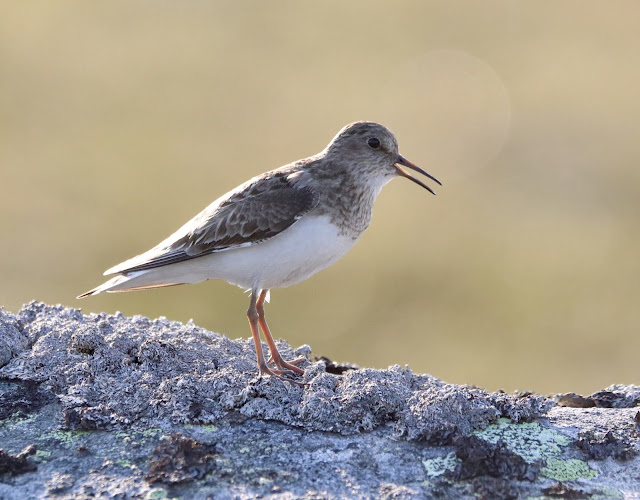 Circumstances this year have conspired such that I am not able to travel to our cabin north of the Arctic Circle near Bodø. And this after a solid 9 year run. This is a real highlight of every year and birding wise had resulted in my two best finds ever (Asian White-winged Scoter and Pied-billed Grebe).

Every cloud, silver lining and all that though it does mean that I am able to discover the bird and perhaps most interestingly the insect life of Oslo in July which I have missed out on before. Birding wise it has allowed me to follow up on some exciting, if not rare, breeding birds which I will have a long post on later in the year. Insect wise I was of course hoping to find some interesting butterflies or dragonflies. I hoped to see Poplar Admiral (ospesommerfugl) and White-letter Hairstreak (almestjertvinge) but have not succeeded so far.

It has been very good conditions for butterflies though and I have seen a lot of species with fritillaries with 8 species in Maridalen being all I could hope for with only the exception of Queen of Spain (sølvkåpe) which it is still early for. A moth stole the show though with a huge Bedstraw Hawk-moth (mauresvermer) having me initially thinking I was watching a dragonfly as it buzzed past me. Luckily it stopped to nectar on thistles for a couple of minutes and despite having the Beast with me I got some nice shots.

Another silver lining has been able to watch football and TdF on the big screen rather than on a phone as is the norm at the cabin 😊. 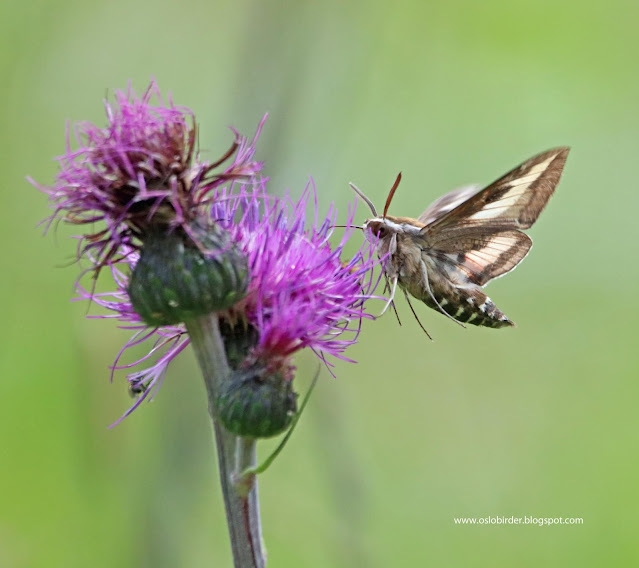 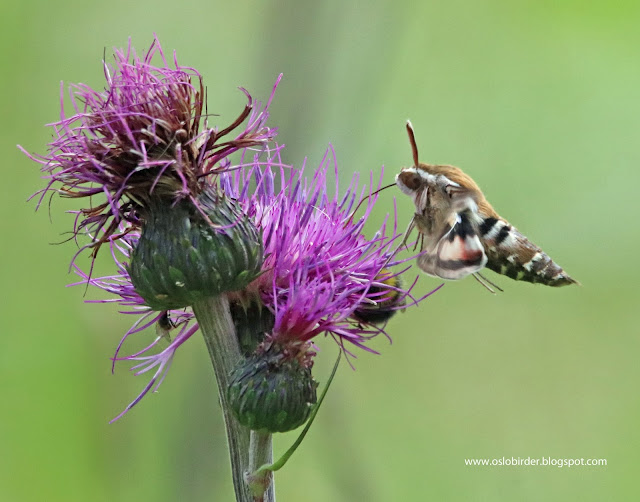 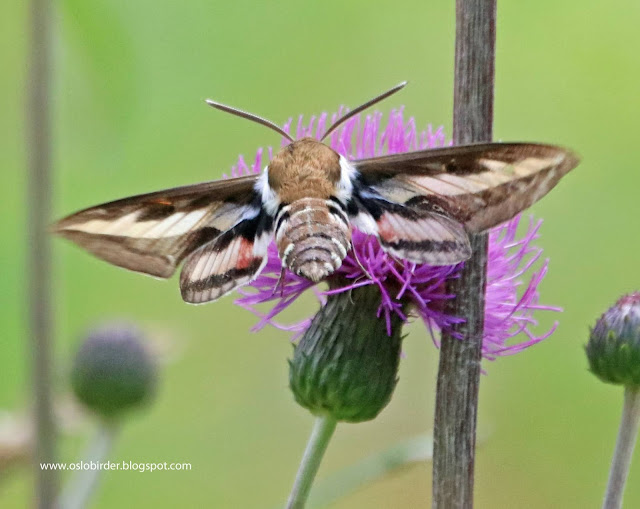 And now 8 species of fritillary seen in Maridalen this week: 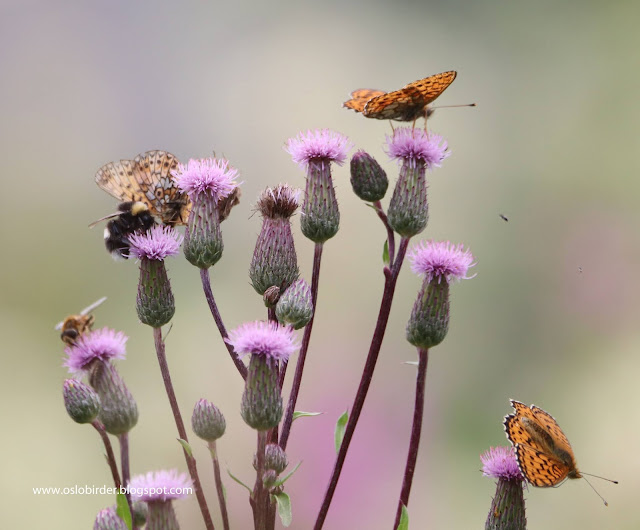 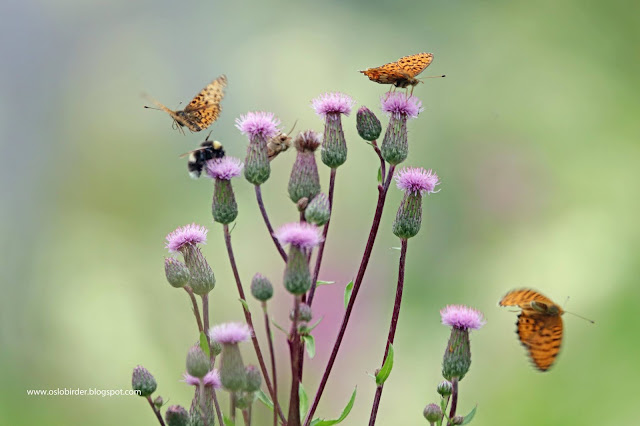 
There is not much variety amongst the odonata at the moment but some of them do look quite stunning: 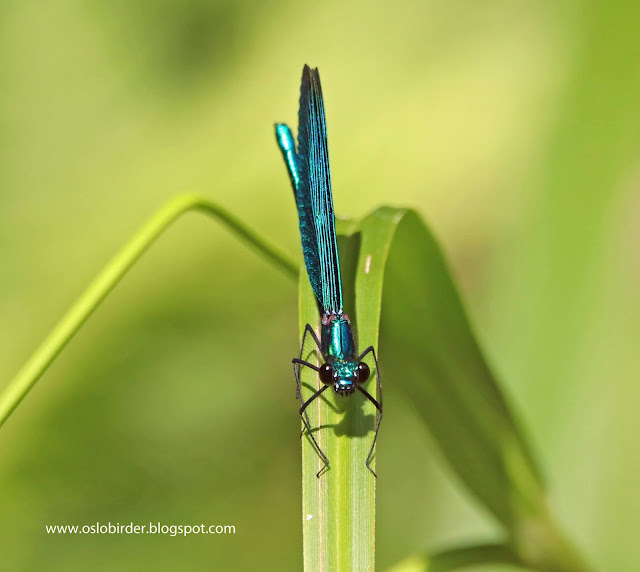 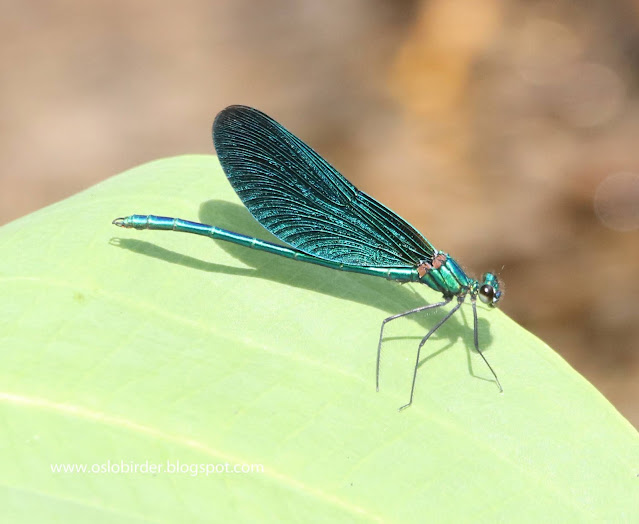