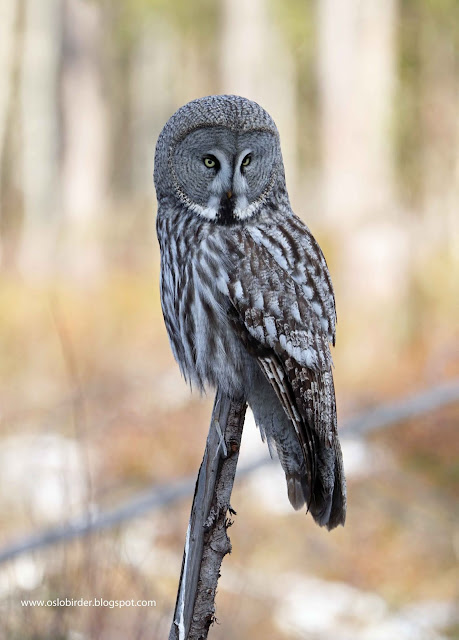 The Great Grey Owls that graced Maridalen between mid December 2019 and mid March 2020 were fascinating to follow. After two birds were seen at the same time and a noticeable size difference between them was noted a lot of time was spent speculating which bird people were looking at. I thought that I could see differences in wing length and others thought that they could see differences in face pattern as well as size differences.  Studying my pictures though I noted that the pattern of the underside of the tail feathers was unique and once I was able to use this to identify birds I realised that the same bird could differ considerably in how it looked and the impression of size/bulk it gave at any one time. What I had considered to be pictures of different birds (based on impression of size and wing length) proved to be the same and what I had assumed to be different birds at very different locations turned out to be the same bird moving around.

Study of pictures has revealed that a quite astonishing total of 4 different birds were in Maridalen (the first record of the species in Oslo was only a month earlier in November 2019!). Two of the birds were present for the whole period, one bird for just over a month and the fourth bird was only seen on one date. In addition a number of sightings have not allowed the individual bird to be identified so the presence of additional birds cannot be ruled out. 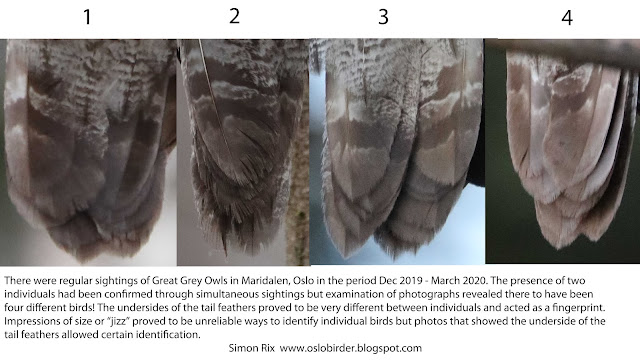 I had intended to write a proper paper on this and maybe I still will (along with the Red-breasted Flycatcher soap opera in 2017) but for the time being this blog entry will be my write up.

I saw the first bird on 15 December and my last sighting was on 17 March although the last sighting that I know of was on 23 March. There were six general areas that the birds used (see map). Two of these were quite large and could perhaps be split into smaller areas but on a number of occasions I followed birds that moved quite large distances in short periods of time and used the entirety of the area so have chosen to go with the larger area. The birds were looked for throughout their stay although most people were concentrating on one area (bottom left on the map) but despite this there were no sightings at all in the period 11-19 January suggesting other undiscovered areas were also used. 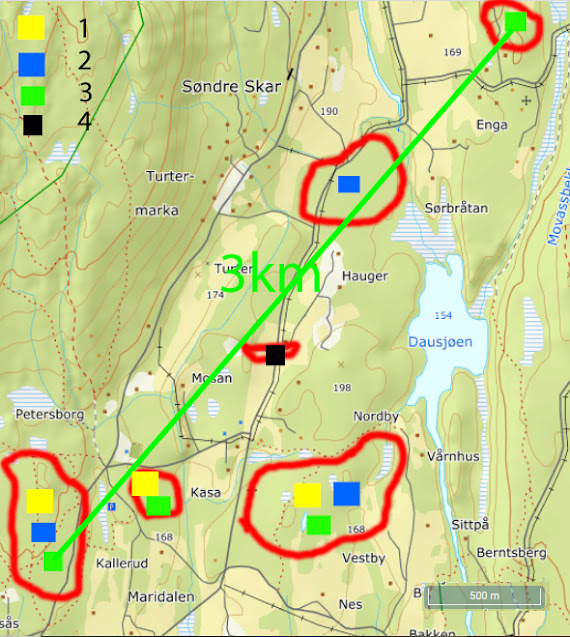 Bird #1 was first identified retrospectively from pictures taken on 17 December although this had initially been assumed to be the same as bird #3 found on 15 Dec. It was not until the sighting of two birds on 26 December that the possibility of different birds crossed my mind. The last sighting was on 23 March and it was also identified on 15 days.

Bird #2 was first identified from photos taken on 21 January and last noted on 26 February with 9 observations in total. It was most frequently observed in an area where no other individuals were seen but did also visit two other areas which were used by #1 and #3.

Bird #4 was only noted on the single date of 23 January at a location where no other owls were noted.

Additionally I have noted 13 other observations/dates where it has not been possible to identify the individuals involved including days when more than one bird was seen and it is definitely possible that additional individuals have been involved.

Of the six areas that I have identified two were used by three of the birds, one by two birds and three of them by single birds. Bird #3 (the original bird) was the most mobile and was seen at sites that were 3km apart (as shown on the map above).

The reason the owls arrived in Maridalen was that in 2019 there was a cyclical low in rodent numbers in much of Scandinavia and especially in the breeding areas ca.120km north of Oslo. This resulted in lots of GGOs fleeing their breeding areas and moving around Scandinavia desperately searching for areas with rodents and many were seen at coastal locations. In Maridalen there was no indication of an abundance of rodents but there were clearly relatively more than anywhere else within many tens/hundreds of kilometres and these wandering birds must have all independently discovered the same area(s). It would be fascinating to know how the owls had been moving around, what height they were flying at and how exactly they homed in on Maridalen.

For hunting they favoured recently cut clearings or areas of thinned out forest and occasionally on field edges. They clearly hunted mostly at night and often would be found roosting during the day (when found they would usually be on the edge of a clearing but when not found were presumably further in to the forest) but when they were hungry they could be found actively hunting all through the day although more actively at dawn and dusk.

With multiple birds present I was of course hoping that breeding would take place. I had considered putting up nesting platforms but in the end could not find a suitable area which I thought would remain undiscovered by the general public (Maridalen is very well visited with paths seemingly everywhere in the forests). I went out on a number of occasions in the evening in Feb and March but never heard song. I also used playback in areas where there had been birds just a few hours previously without getting any response. With no observations in Maridalen after 23 March and only a handful of breeding attempts recorded in Norway in 2020 my assumption is that there just wasn’t enough food for them to even consider breeding and their priority was just to survive.

Currently (Dec 2020) we are having a cyclical top to the rodent numbers (how quickly things change) but surprisingly there are few records of Great Grey Owls in southern Norway. There are a few birds with GPS trackers though and these give us a clue as to why. These birds had been wandering but have now returned to their breeding areas and are hunting within the forest rather than in clearings and are not being seen. Clearly when there is lots of food GGO is a nocturnal forest species but when food is scarce it hunts more in the open and more during the day. It will be very interesting to see if they become easier to find as the winter progresses (lots of snow could change availability of rodents) and listening for singing owls from February onwards will be the real clue as to where they are. 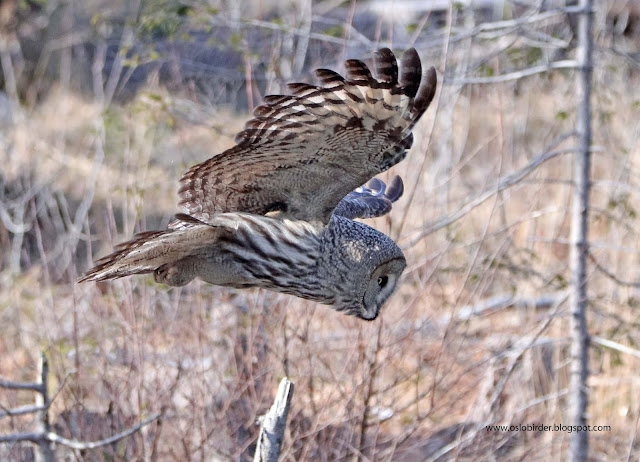