If I was happy with yesterday’s birding then I am ecstatic about today’s even if there was an element of twitching in today’s outing. I was lucky enough to be invited out by Bent Hammel on his 15ft boat to search the inner Oslo Fjord for the goodies that Andreas Gullberg has found this week on his boat trips, although I would just like to say that Norway’s reigning national champion in birding should have done a better job at identifying the birds 😉

Bent picked me up from Fornebu at 9am and we headed first for Bygdøy. On the way there wasn’t too much to see although there were a surprising number of Common Terns still around with many young begging for food. At Bygdøy we were searching for the 2cy male King Eider that Andreas found on Tuesday and in our search we nearly ran aground a couple of times. We diverted to Galteskjær to look for the Shag Andreas found yesterday. We spent quite a bit of time photographing a small Cormorant before accepting that was what it was but hit gold with a juvenile Red-necked Grebe. This species is very scarce in these parts but this was a classic record and the bird was also in classic plumage. Three Dunlin here were also a good Oslo species. After many photos we headed back to Bygdøy and bingo Elvis was in the building! The King Eider was sitting preening on a rock and allowed very close approach. We realised how close we could get when a canoeist passed at just a couple of metres range without the bird reacting. This plumage is relatively little known (at least for most of us) and Andreas originally thought the bird to be a hybrid with Common Eider which I understood because the head and bill shape are definitely different to an adult male King Eider. However, this would appear to be how they look at this age. With luck it will hang around and acquire a more regal plumage.
With our boots and memory cards filled we headed further out and found the Shag on Søndre Skjælholm!! So complete success on the twitching front plus a very good find AND the day was just fantastic with calm seas, sun and temperatures nudging 20C. This is definitely how birding (and twitching) is supposed to be 😊

Taking photos today was a challenge. Despite the sea being very calm there was still enough movement that the superzoom was very difficult to use and the old 70-300mm lens was just too small at times. Even so I can’t really complain with the results. 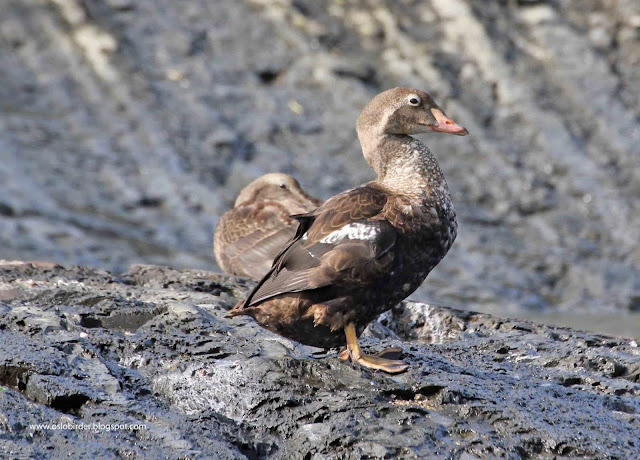 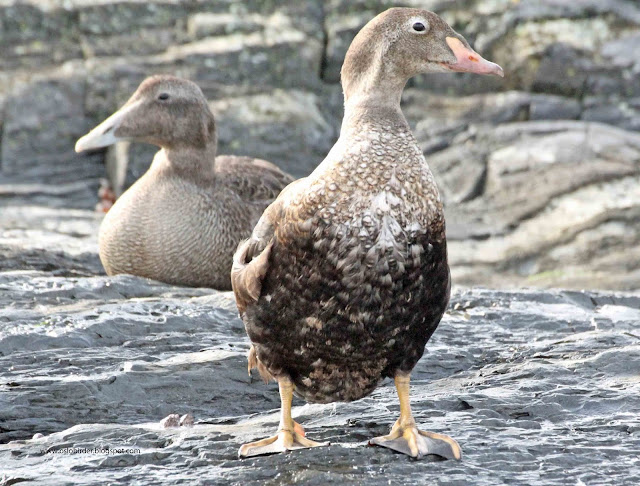 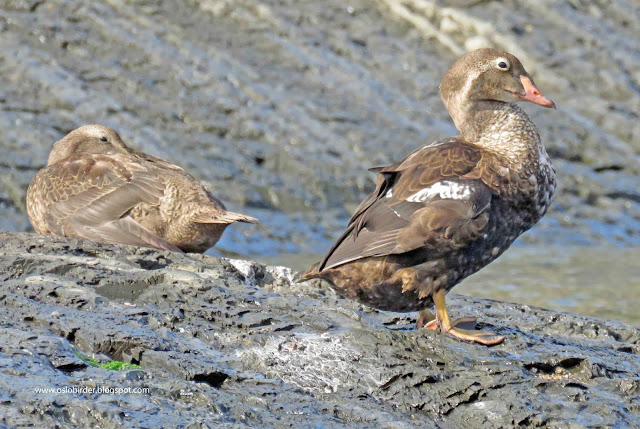 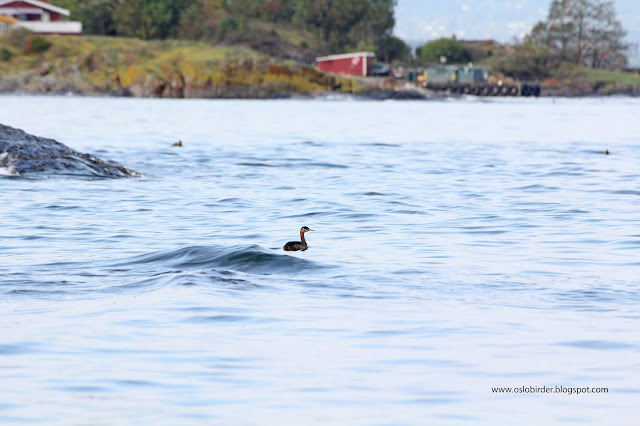 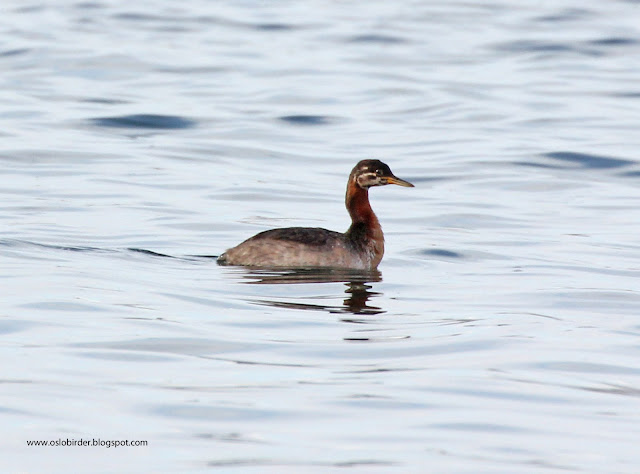 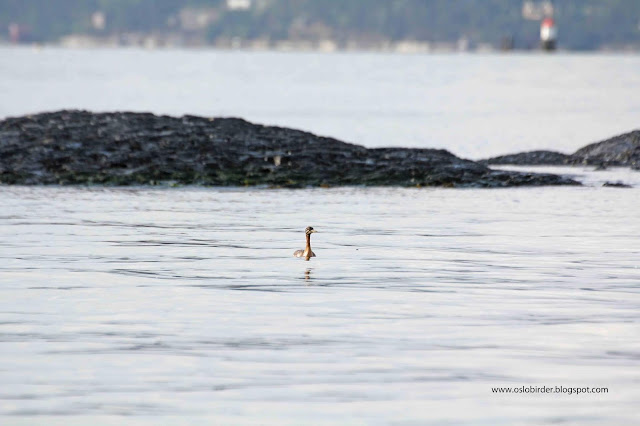 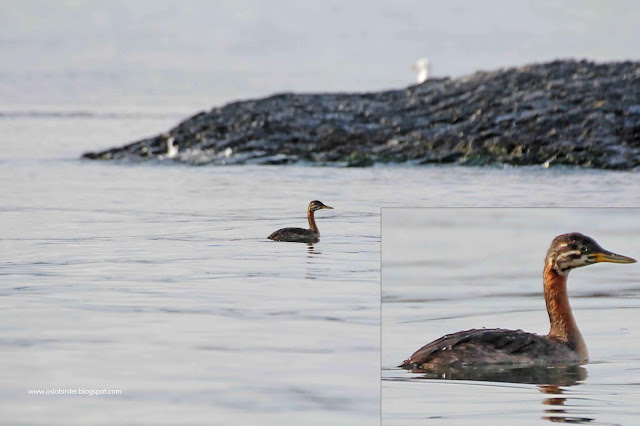 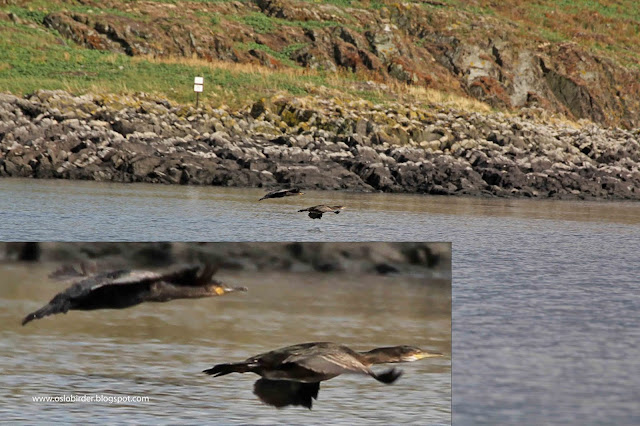 A days birding to be happy with

I have had a goal of giving Årnestangen and Svellet good coverage this autumn so that was where I headed again yesterday. The Great White Egret found on Tuesday was distantly on show as I walked out, and an Osprey, Marsh Harrier and Cuckoo also showed on the walk. Out at the point there was a large expanse of exposed mud but few birds at first. The closest wader though was a fresh juvenile Curlew Sandpiper and there were also over 70 Dunlin but no stints. Passerines provided perhaps the most entertainment with many pipits and wagtails feeding in the grass and on the mud and occasionally flying around calling. Amongst them I heard at least one Red-throated Pipit and a Lapland Bunting and had what sounded like a Citrine Wagtail (but I would need to see that well to claim).

On my way back I heard (but without realising what it was) and then saw the Egret flying over me which was a far cooler experience than twitching one as it was so unexpected.

Svellet was full of birds with around 1000 each of Barnacle and Greylag Geese. The 3 Blackwits were still present as were 2 Hobby and nearby 5 Shoveler.

I decided on a trip into Maridalen as Lars Petter had photographed a perched Honey Buzzard early in the morning and if they have found a wasp’s nest then they visit it again and again to dig it out so I thought I may have a chance of finding the bird again. And sure enough I did find one but not necessarily the same bird as LP’s picture appears to show a female (brownish head) whilst my bird is a male (grey head) although the rest of the plumage looks similar. I didn't see it perched but did have it fly over me 4 times! At 1338 it flew west carrying food and returned 9 minutes later and I watched it going down ca 1km to the east. It then flew over me again 27 minutes at 1414 with food and again 9 minutes later it returned and looked to go down in the same area but didn't reappear despite me waiting 30 minutes. So clearly it takes its time getting the food but feeding the young is quick. I assume a bit of time is spent perched and checking for threats before going to the ground to then dig out the wasp’s nest. The HB nest though can't be that far away as it was a 9 minute round trip including delivering the food and it was flying fairly leisurely. I have written before about how I am amazed that I don't see the Honey Buzzards earlier in the summer but how they always turn up in August when they have large young to feed. My previous observations had suggested that nests were a very long way a way but clearly not this one (max 2-3km?). They are clearly just very secretive early in the season.

Whilst waiting for my Honey I had Common Buzzard, Kestrel and Peregrine so the Dale delivers again.

The bazooka lens has taken its last picture unfortunately and whilst I choose which new lens (and camera) I will buy I am left with the superzoom and the old 70-300mm lens started with. Today I forgot to pack the superzoom so all pictures are the old kit and I mst admit I think it works perfectly fine for documentation. 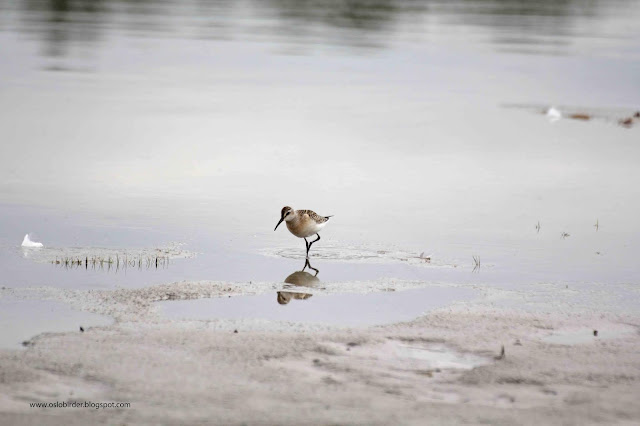 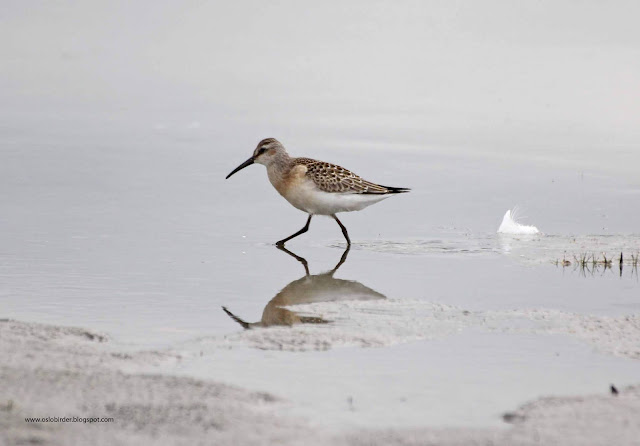 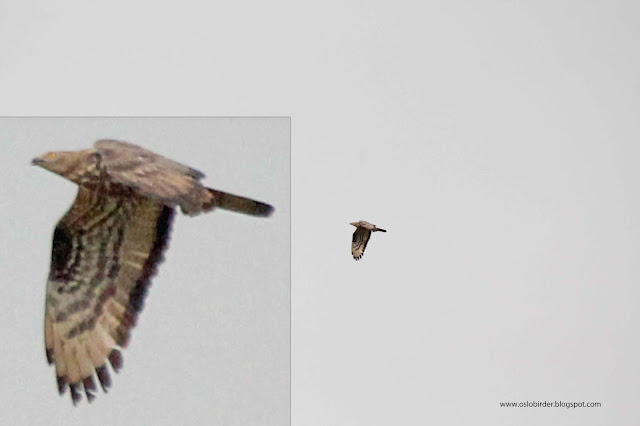 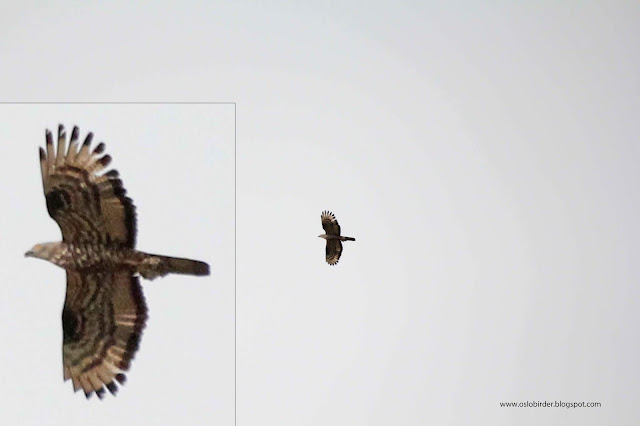 
Monday saw me out at Årnestangen and Svellet. Årnestangen didn’t have too much to reward the long walk but at least 4 different Marsh Harriers kept up my hopes of finding a Pallid Harrier. The might Svellet though had a lot more to offer though with 3 Blackwit, 2 Barwit, Shoveler, Little Gull, Hobby and Turnstone – it’s just a shame distances are so long here.

Whilst I was there a message came in that a juv Med Gull had been foolish enough to allow itself to be blinged in Oslo. Maybe this was the same bird that had blown past me on 10 August? Later in the evening a grainy picture of a supposed Great White Egret was published from a lake in the forest just north of Maridalen was published and I hatched a plan for Tuesday.

I needed to go into town so planned on refinding the Med Gull, getting the chores out of the way and then going for the egret. Well, the fact that I was twitching meant of course that nothing went to plan. The gull didn't show and the egret turned out to be a leucistic Grey Heron although luckily this was discovered before I set off. A pukka GWE turned up at Årnestangen though....and I must have walked past a King Eider.....

My birding wasn't that bad though. I had two male Bluethroats on Bygdøy and got to see an interesting goose. This goose has been doing the rounds since the spring and has variously been recorded as a Cackling Goose and as Canada Goose of the race parvipes. It was only after it (and the Barnacles it has been associating with) turned up in Oslo though that its true identity has been discovered.

It is clearly a hybrid between some form of Canada Goose and Barnacle Goose and its tiny size points clearly to it being a Cackling Goose rather than Canada although it will still most likely a feral bird as the Barnacles are not from Svalbard but from the huge southern Scandinavian feral population and such hybrids are known in Northern Europe.

The Black Redstarts showed well in their favoured area near the Akershus Festning castle and there were at least 3 birds: mum and dad and at least one youngster. Dad looks to be in quite nice plumage and may have moulted already whereas mum looked quite tatty. 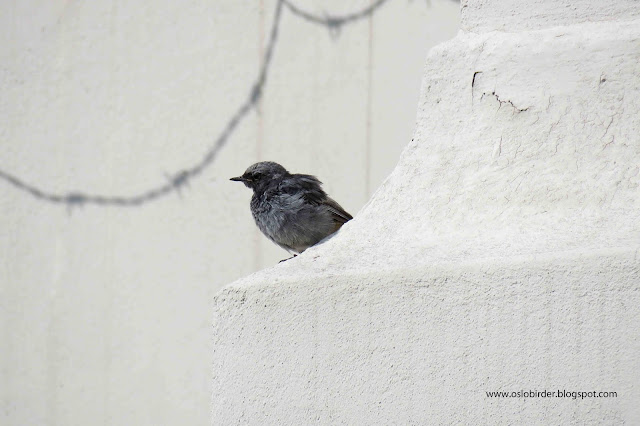 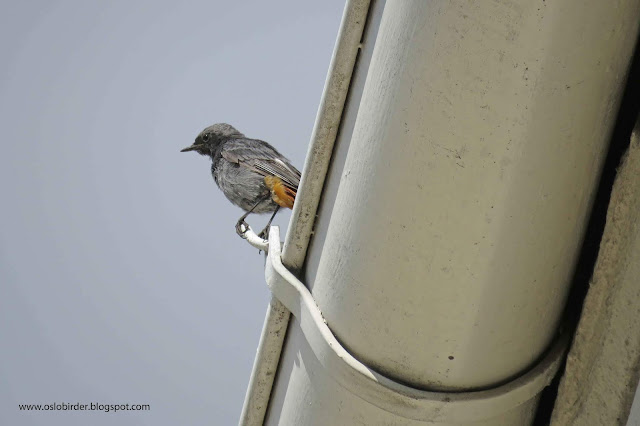 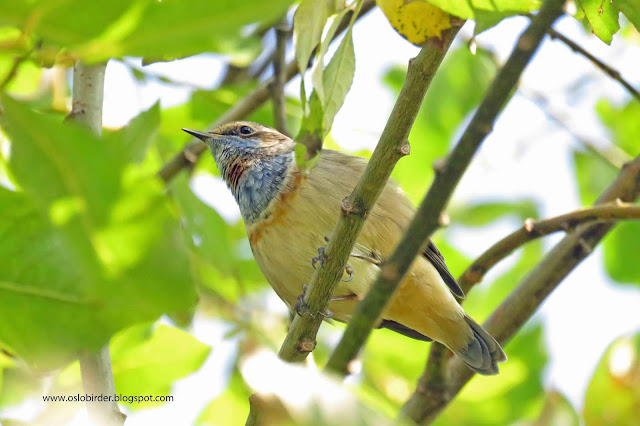 On Friday I was guiding Daphne from Maryland. The goal was good days birding and a nice selection of local birds and we definitely succeed with that. Leisurely walks around Fornebu and Maridalen in warm and sunny conditions were quite birdy and we chalked up 56 species.

Fornebu in particular had a very good selection of birds and I finally found out where all the Willow Warblers are hiding. We also had Bluethroat, Redstart and Whinchat more or less in the same bush!

Butterflies also surprised with a Small Blue which is the second latest ever recorded in ArtsObs (and only by one day) and also a very fresh Swallowtail which is also unusually late.

In Maridalen in the afternoon things had quietened down a bit but very close up views of a dragonfly eating a wasp was very exciting. We also had three young Swallows which were clearly just out of the nest perched only 2 metres from us and being regularly fed by their parents. 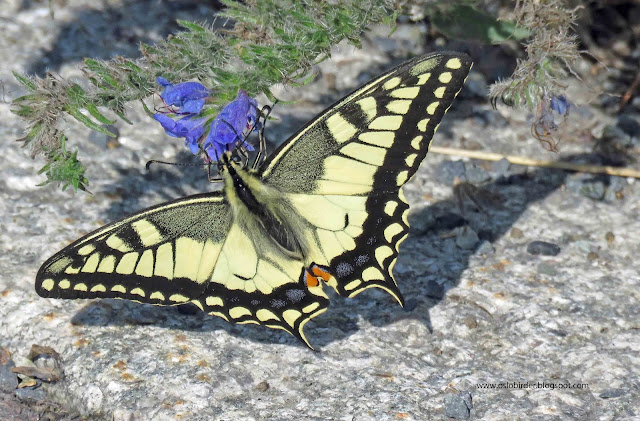 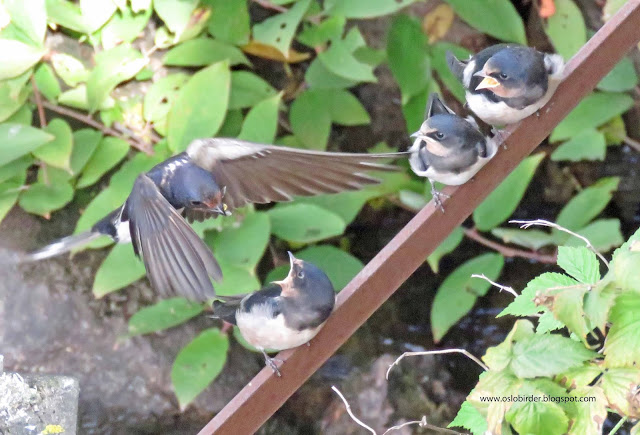 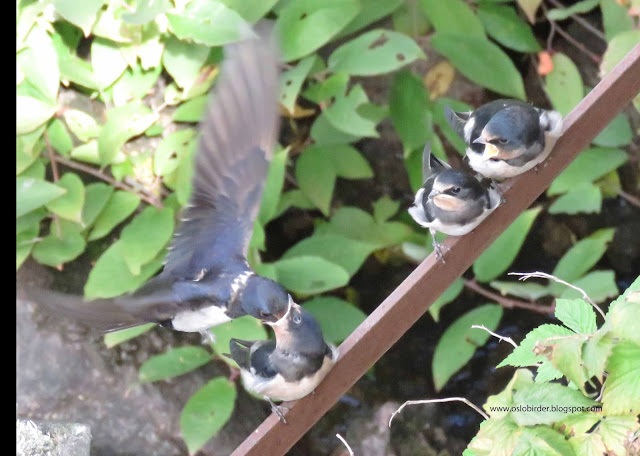 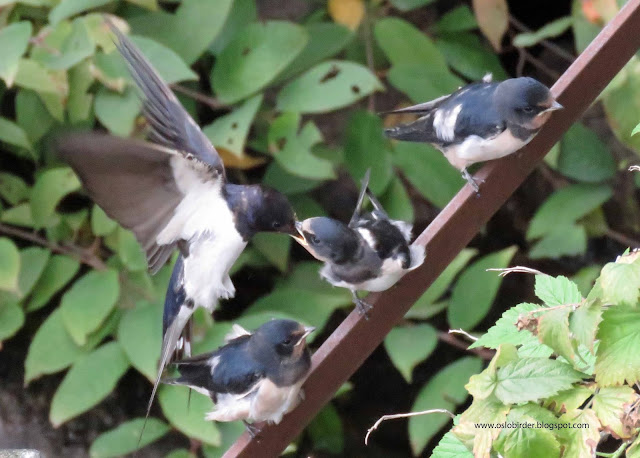 The last two days have seen me at Årnestangen. Yesterday it was drizzling with a very fresh southerly wind and today was sunny and windless. Both days provided good birds although nothing more than scarce. I added White-tailed Eagle and Goshawk to my raptor list and so now have 11 species this week (plus the Red Kites from last week). The next species that I need to turn up are Hen Harrier and hopefully Pallid Harrier (I am still waiting to get gripping views of a juvenile bird).

Waders have not been in great numbers (less than 100 individuals in total with 42 Dunlin today the most numerous species) but the variety is starting to build up again. Sanderling, Knot, Curlew Sandpiper, Little Stint, Temminck’s Stint, Turnstone and Great Snipe are all good species.

A Little Gull heading south and a heard only Kingfisher were also good but nothing has given good photo ops.

On the passerine front obviously migrating Coal and Willow Tits were a surprise with 2 Coal Tits launching themselves out of the last bush on the point and heading over the lake and a flock of 15 Willow Tits flying high further up the peninsula. 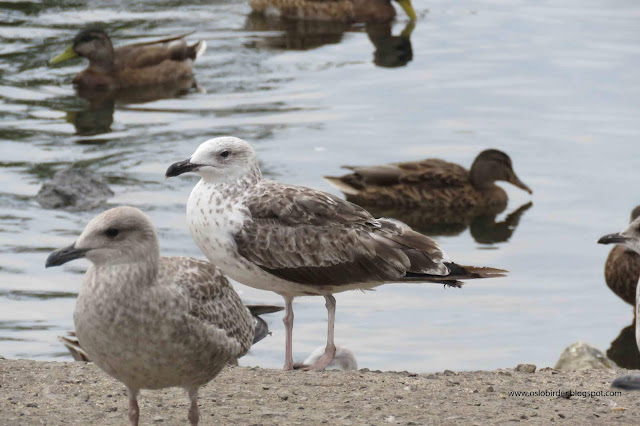 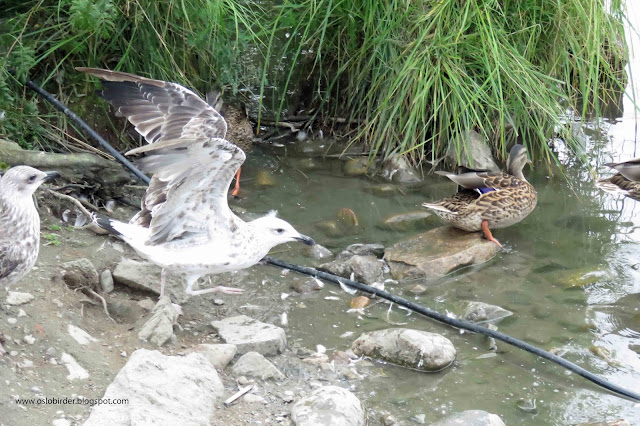 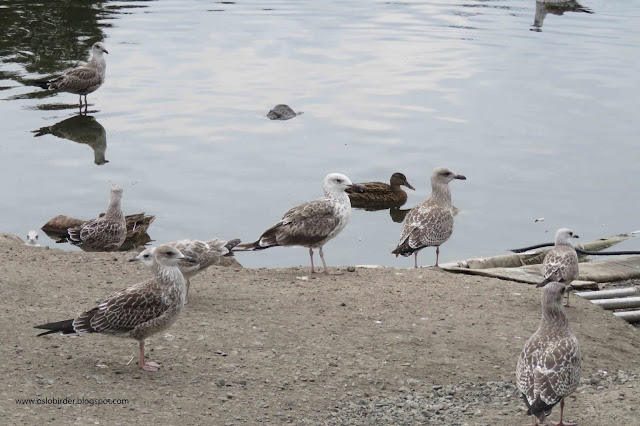