Yesterday saw a welcome day back in the guiding saddle and I had a successful and thoroughly enjoyable day showing some of my favourite birds to Christine and Maria. Temperatures ranged between -16C and -8C so it was a cold but quite beautiful day.

A young Goshawk provided an unexpected identification challenge for me. When I originally glimpsed it gliding through some trees I assumed it was a Hawk Owl. When we refound what I assumed to be the same bird I identified it as a Buzzard based on rear views perched in a tree. When it flew off I saw nothing to make me change my mind. When I reviewed my pictures in the evening though I saw what it actually was…

We also enjoyed a 5 species of Tits although as is typical for this winter Greenfinch was the only finch we saw.

Water Rail was an exciting way to end an enjoyable day.

Since my last post on Sunday daily temperatures have fallen to -15C early in the mornings although they rise to a barmy -5C in the afternoons. There have been no major changes in the bird scene although my Pygmy Owl seems to have moved on to, as yet undiscovered, new pastures.

On Monday, my first downhill skiing trip of the winter at Oslo’s Wyllerløypa was enlivened by 4 Pine Grosbeaks seen from the chair lift. This is the second time I have seen them from the lift here and I have also chalked up Hawk and Pygmy Owl in the past. Pine Grosbeaks have been more or less absent from southern Norway this winter (following the mayor invasion last winter) so it was a real surprise to see them. I was back at the slope on Wednesday dropping off Jr Jr and a friend and I then went birding in Sørkedalen which gave me a Great Grey Shrike and Hawk Owl. I have also seen three different Hawkies in Maridalen this week aswell as the Great Grey Shrike so both of Oslo’s valleys are delivering the good this winter although it is only Maridalen that has overwintering Buzzards.

Today, in addition to some cool Water Rail action which I will blog about at a later date, I had a close encounter with a Sparrowhawk in the garden which took the Fieldfare that has been here for the last three weeks – one less species to worry about in this weekends Garden Bird count 😉 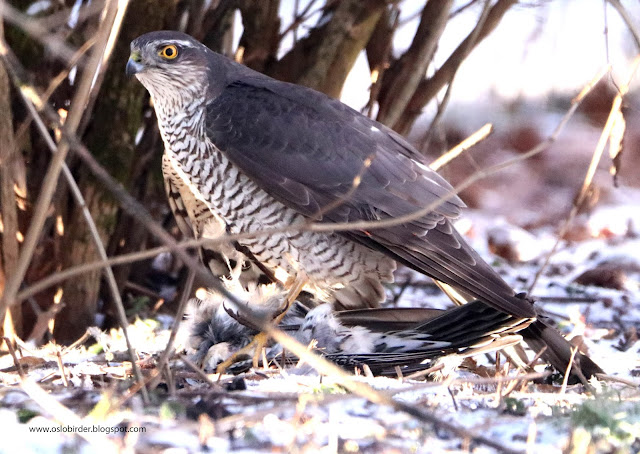 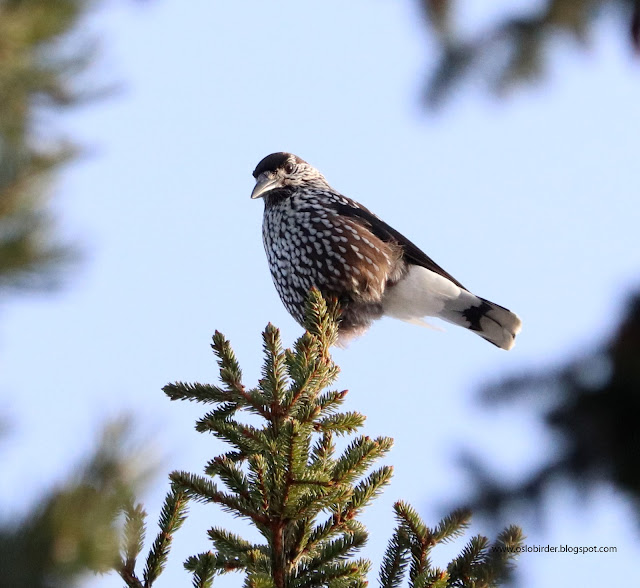 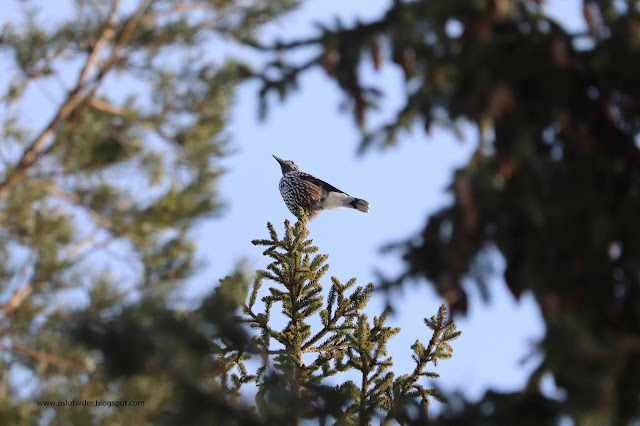 Since my last post I have shaken things up a bit and left the Dale on two, yes two, occasions! On Wednesday I walked along the waterfront in Oslo with the main aim of seeing the Iceland Gull. After seven previous unsuccessful attempts to see this bird I had decided I wouldn’t try again but after it was seen two days in a row along the waterfront downtown I thought that it had settled down. Maybe it has but I still couldn’t find it… There was very little of interest otherwise although the young male Pintail (with very delayed moult) was on the fjord with some Mallards and has now been seen at four widely spread localities in the city in January.

On Thursday night most of Norway was hit by a big storm and with the winds forecast to reach up to 25m/s and directly from the south I headed out on Friday morning to my favoured sea gazing location of Krokstrand. Well the wind was not even 10m/s and there weren’t even with tops to the waves so unsurprisingly there were few birds. Lots of Common Gulls heading south were perhaps birds displaced overnight by the storm, but the only seabirds were a single Kittiwake, Red-throated Diver and three Guillemots.

I have of course visited the Dale as well and here the birding has been hard at times. Temperatures rose mid week and there came first lots of new wet snow and then rain and wind. This must create very difficult conditions for the rodent eaters but the two Common Buzzards are both to be seen as are a couple of Hawk Owls and the Great Grey Shrike. The Pygmy Owl only gave up its presence by singing unseen in the distance one day.

Yesterday the weather turned again and we have glorious blue skies. Mrs OB and I took the Beast for a walk and sat down in a clearing to eat clementines and enjoy the view when suddenly a Hawk Owl appeared in front of us! It was glorious light and the moon was even up in the sky allowing me to take that clichéd shot of an owl in front of the moon although admittedly they look better in silhouette at night. 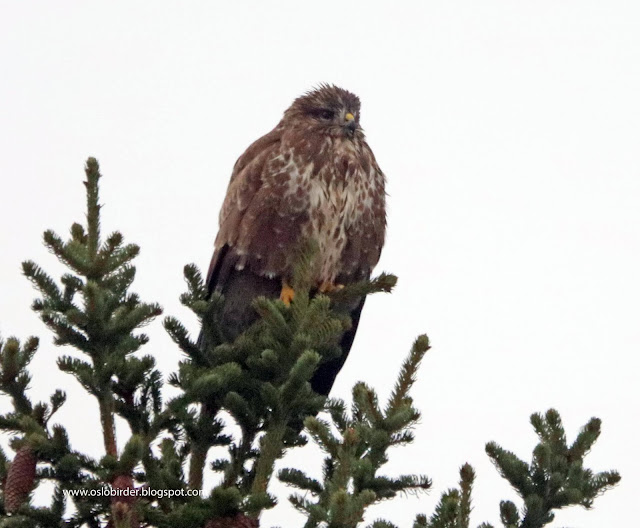 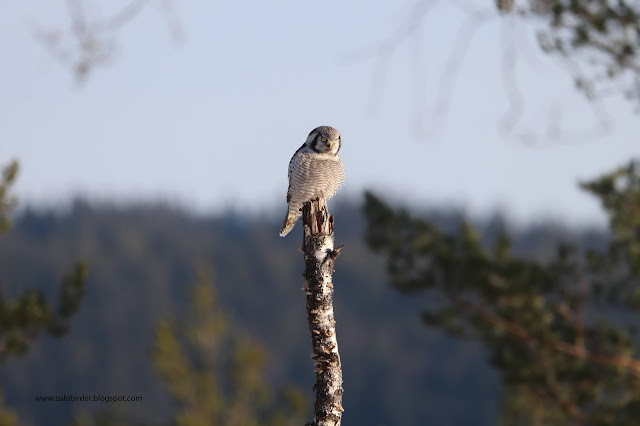 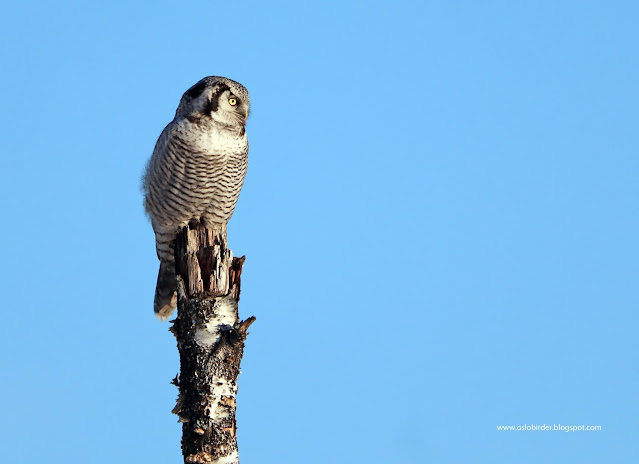 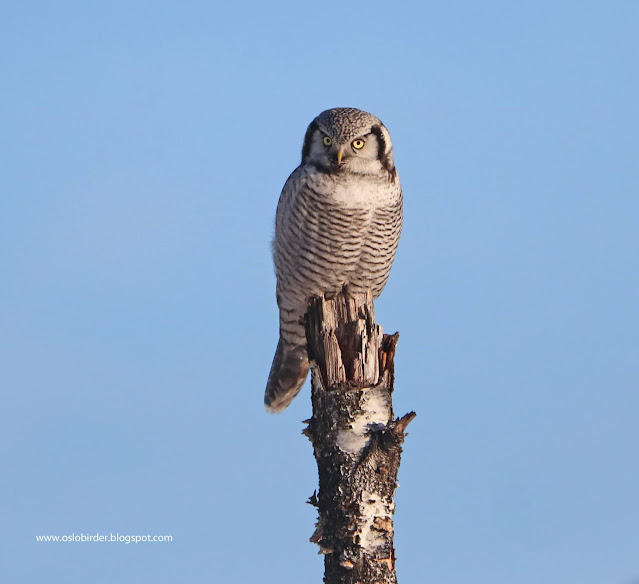 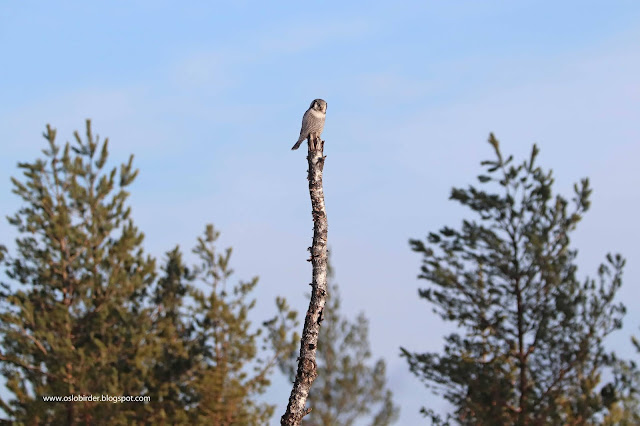 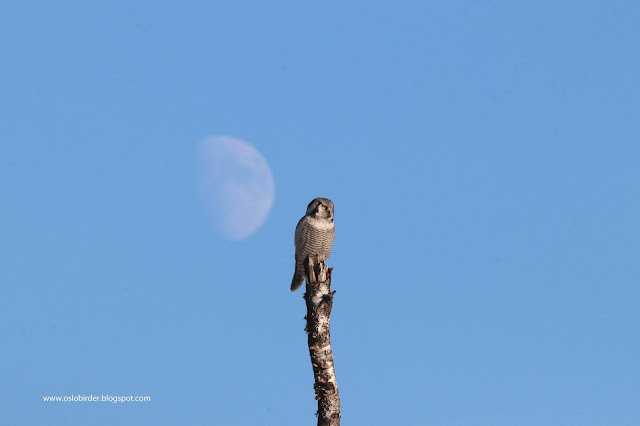 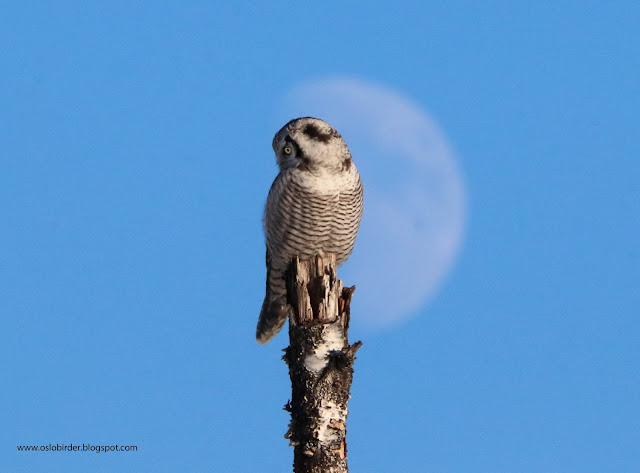 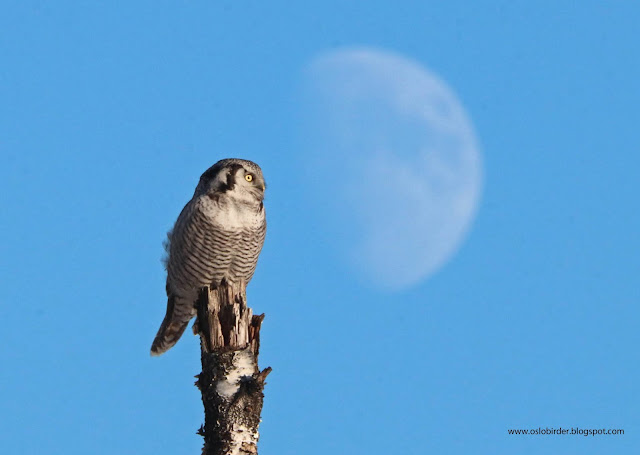 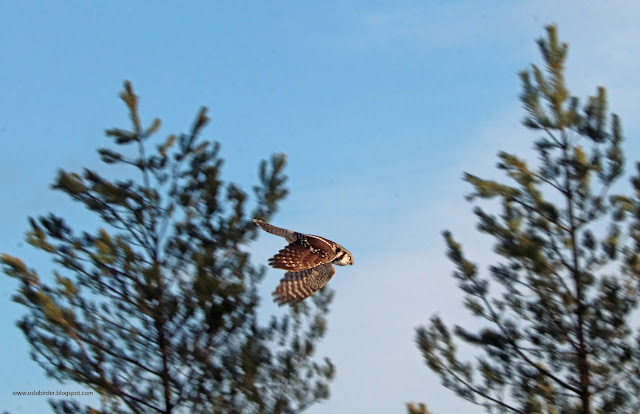 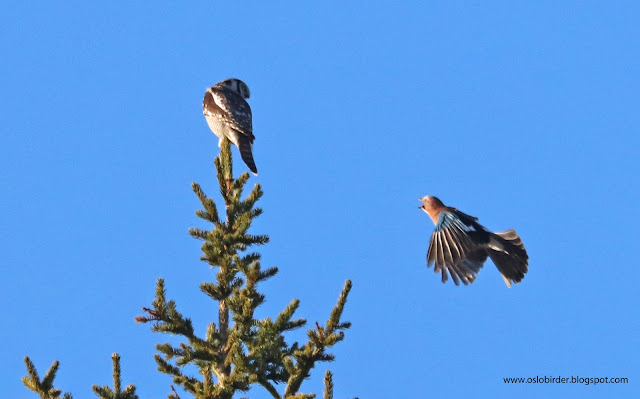 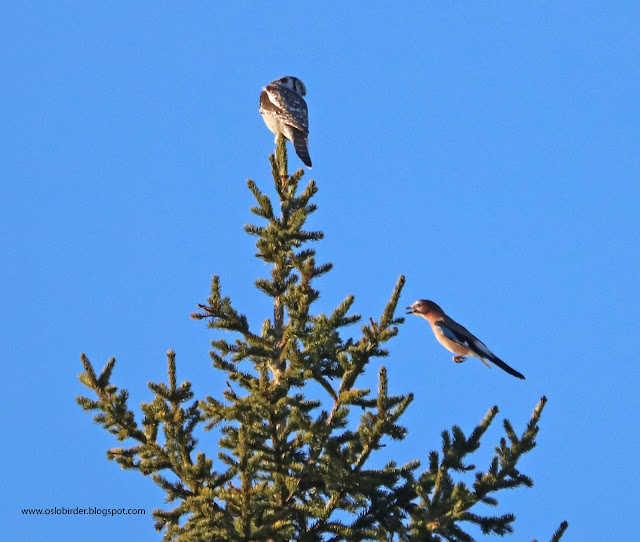 Oslo is surrounded by spruce forest and one would therefore expect that crossbills would be a relatively easy to find and constant feature of these forests, however that is not the case. Spruce trees have a 4-7 year cycle between good seed years and this means that crossbills can often be completely absent if there are no seeds to be found and that is exactly how it is now. Last winter the forests were full of Crossbills (of all three species but predominantly Common Crossbill) as the autumn of 2019 had seen a record cone crop. But during 2020 the Crossbills vansished as the seeds fell from the cones. So, although there are still loads of cones hanging on the trees they are now too old and not of interest. As a result of this crossbills of all three species are very nomadic and are always searching for areas where their favourite coniferous tree has new, seed filled cones (each of the three crossbill species specialises on different trees species). They can travel huge differences in their search and at the moment their appear to be very few of any species in Norway. In the summer one can often hear flocks of crossbills flying over at great height as they search out the next suitable area.

My last record of a crossbill in Oslo’s forests was at the beginning of November and I can see no other observations since late November. I was therefore very surprised when I Sunday I found a flock of 7 Common Crossbills in a cemetery (I was there searching for a Rook which is less than annual in Oslo). The reason they were there is that there were a number of ornamental non-native spruce trees lining the paths and these were heavy with new cones. Common Crossbills can start breeding in January but I noted no song or other evidence to suggest that they were in the breeding mood but if there is enough food here then they may definitely give it a go.

Another interesting observation is wintering Water Rail in Oslo. The species winters around the coast of Norway but there are very few inland observations. This, of course, is because snow and ice means that there are not many suitable fresh water locations for the species. In Oslo, there is really one one suitable location for Water Rail which is Østensjøvannet which has quite extensive reedbeds. There have been quite a few records here in the summer months over the years and the species probably breeds annually. In the winter though (Jan-Feb) the lake freezes over completely and there are only records from 2015, 2019 and this year. I believe the species has been overlooked in the past as the favoured stream (which strangely enough refuses to freeze over) has probably not been visited in the winter before although it now being checked more regularly. A visit yesterday in snowy weather revealed two birds who seemed to be finding food amongst all the fallen branches in the stream.

In Maridalen heavy snow seems to have caused the Hawk Owls to change feeding grounds again but Pygmy Owl, Great Grey Shrike and one of the Buzzards are still to be found. 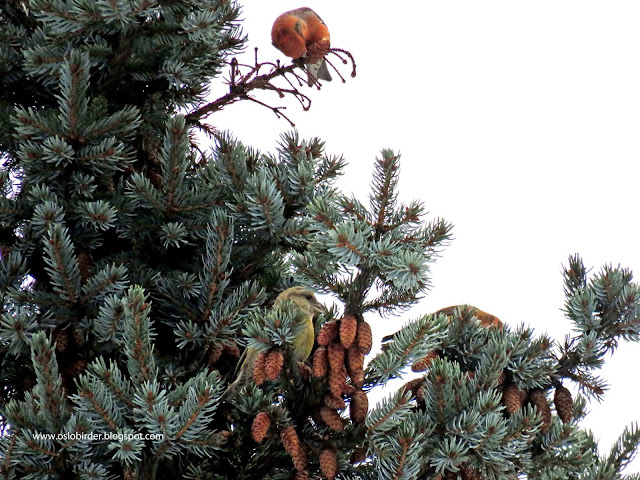 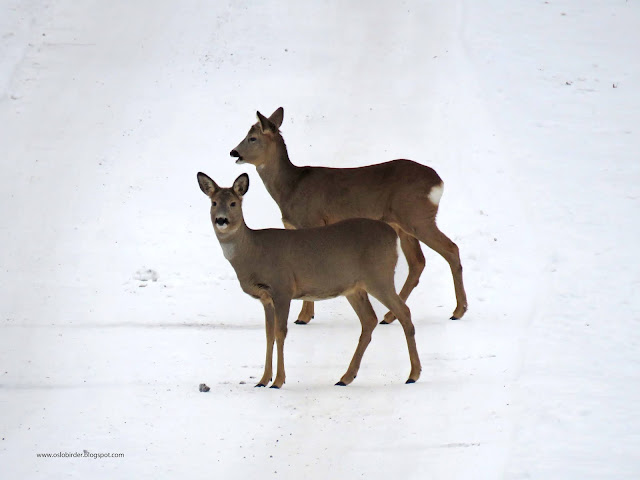 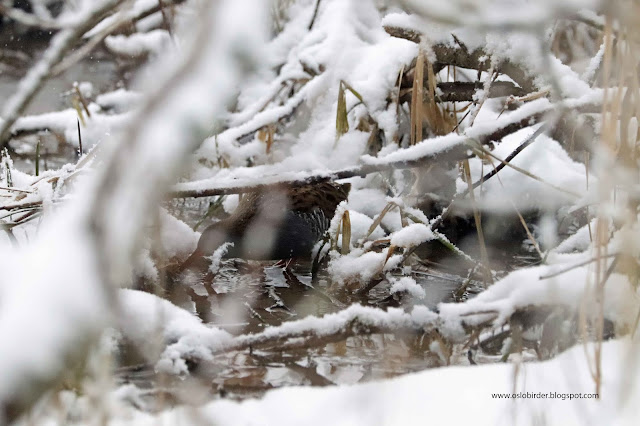 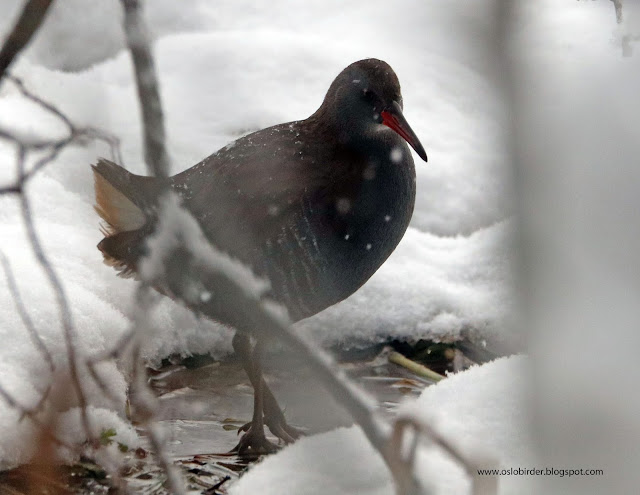 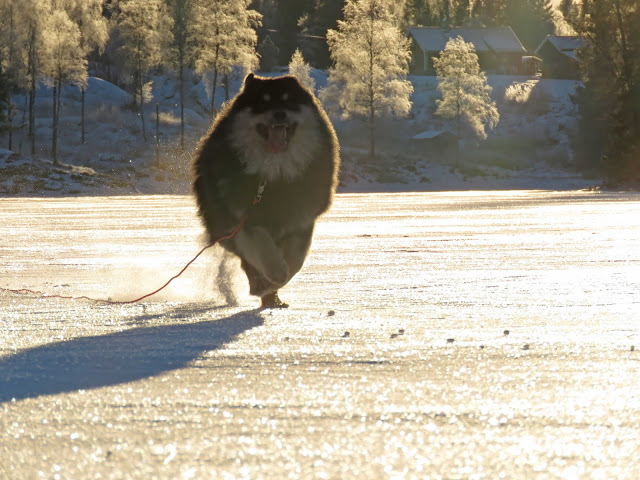 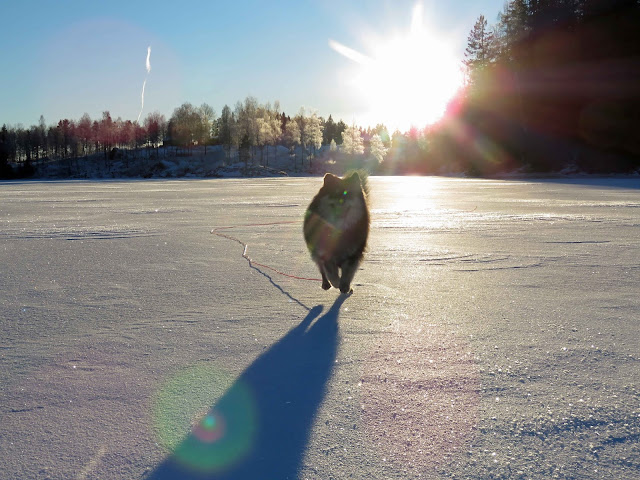