Yesterday I burnt the candle at both ends. After my early morning visit to Valdresflye I HAD to check out the Great Snipe lek in the evening. Partly because I was tired but also with a hope that the snow would have delayed the start of lekking I went up early hoping for lots of testosterone fueled activity. I parked the car at 9pm (normally don’t go until 10pm) and walked towards the leksite. I heard multiple singing birds whilst the sun was still shining on the lek but my attention was taken by a nearby singing Cuckoo before I actually reached the lek. Then a Short-eared Owl appeared close by and then a Bluethroat sang next to me all whilst I was within 100m of the lek and hearing them. When I finally pulled myself away from the other distractions I realised that the sun was about to disappear behind a mountain (despite it being over an hour until sunset).

On approaching the lek I saw it was still mostly covered in snow and the birds were  moslty calling from with vegetation around the lek site and were hidden. Eventually I was able to get to see birds well although only had one in sunshine. There were at least 7 birds with 5 males heard at the same time although one I filmed did not sing whilst others were so may have been a female.

I felt my tiredness creeping up though and decided to head for home before 2230. As I got to the car the first roding Woodcock appeared (normally I have these over the lek whilst I am waiting for it to kick off) and a Willow Grouse cackled. As I drove through the village a still partially white Hare fed on a field alongside two Golden Plover who had probably come down from the mountains where there can’t be much food to find yet.

Taking videos with the 600mm and 10x digital zoom made me realise how bad my tripod is as just a bit of wind produced terrible shake. The videos though will have to wait until I am at home and have the PC in front of me. In the mean time some quickly chosen still shots. 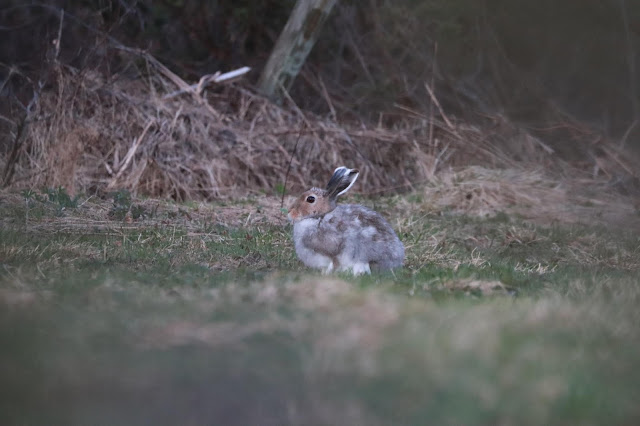 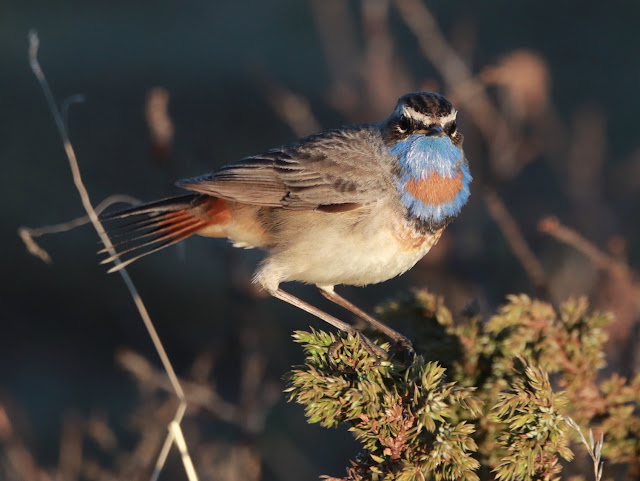 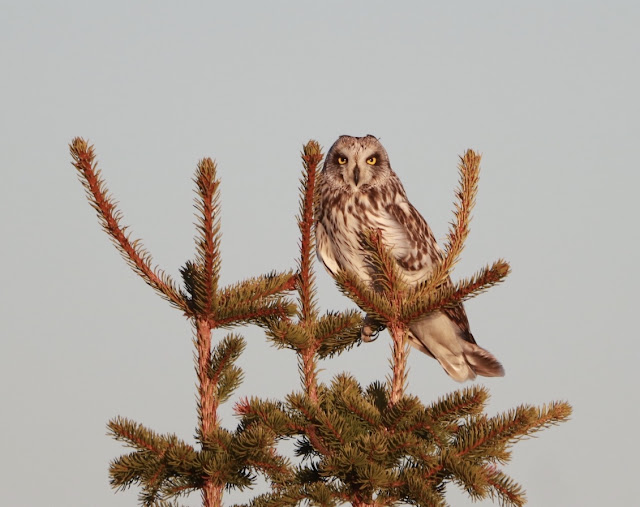 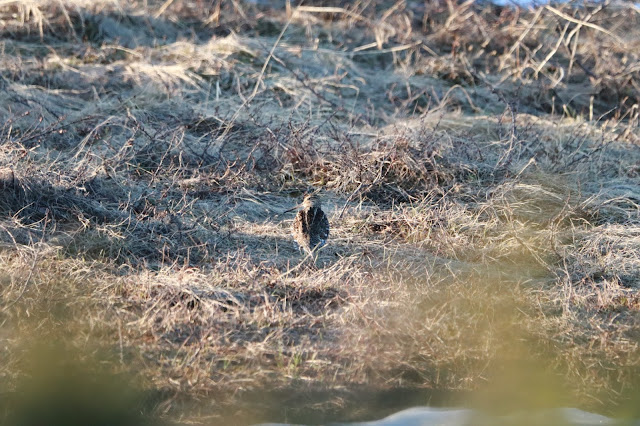 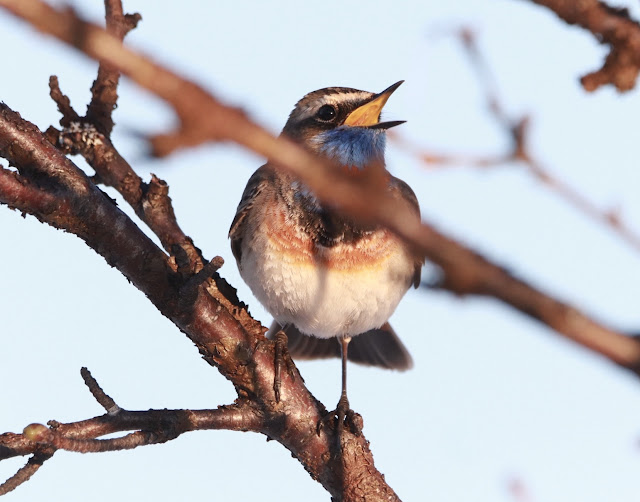 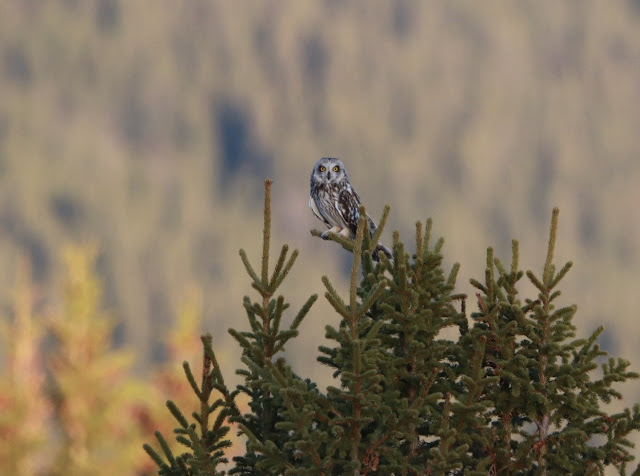 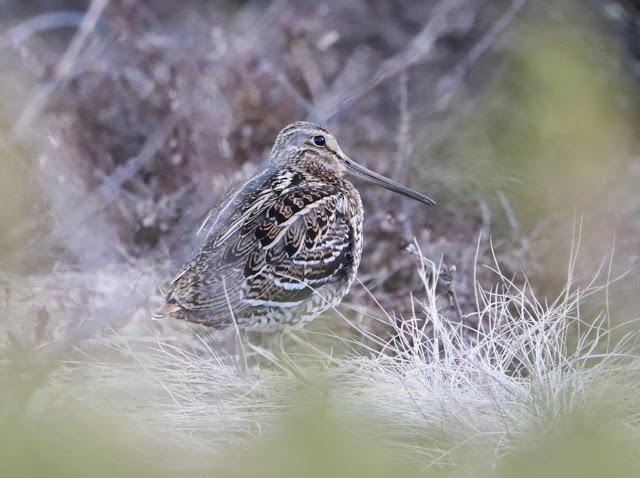 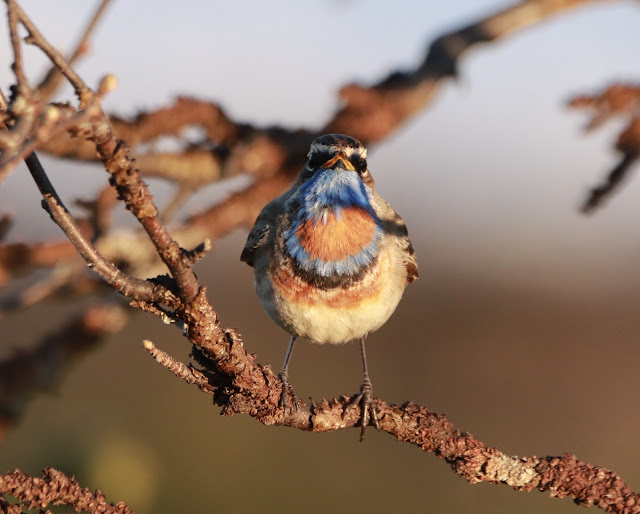 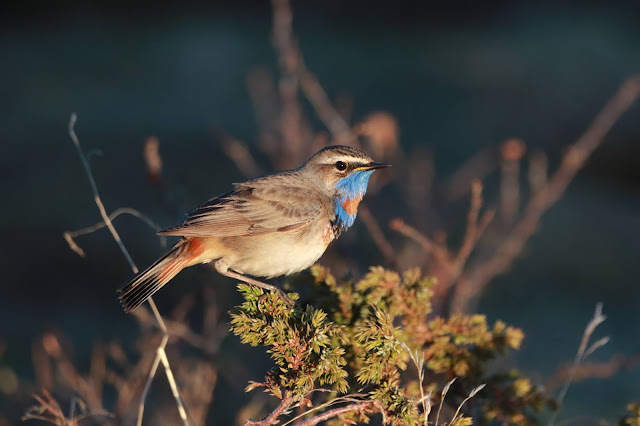 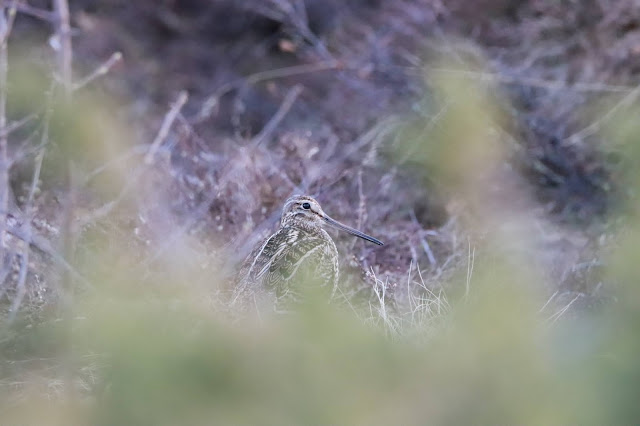 Norway is celebrating another religious holiday, this time Pentecost, which means another long weekend for the heathen masses. We are in a cabin at Beitostølen and it has to be said that we are blessed 😊 Up on Valdresflya there are still many metres of snow, the sun is shining and there is no wind. We have been cross country skiing in short sleeves and I of course have been birding.

I was unable to sleep due to a Redstart which started singing right outside the window at 03:45 and left the cabin before 5am. Before breakfast I enjoyed Willow and Rock Ptarmigan, Shore Lark, Short-eared Owl, Temminck’s Stint, Dotterel, Bluethroat, Long-tailed Duck, Scaup, Arctic Tern, Ring Ouzel, Cuckoo plus many more commoner birds. Despite the snow there were surprisingly large numbers of Meadow Pipits, Wheatears, Golden and Ringed Plovers wherever the snow had melted.

When I returned at 9am expecting everyone else to still be asleep I was met by a lot of tired people - I was not the only one who had heard the Redstart....

I am writing this on the phone so I apologise if there are any formatting issues. 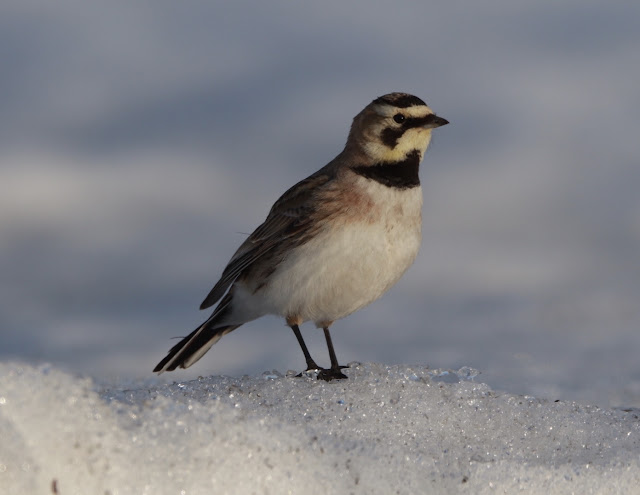 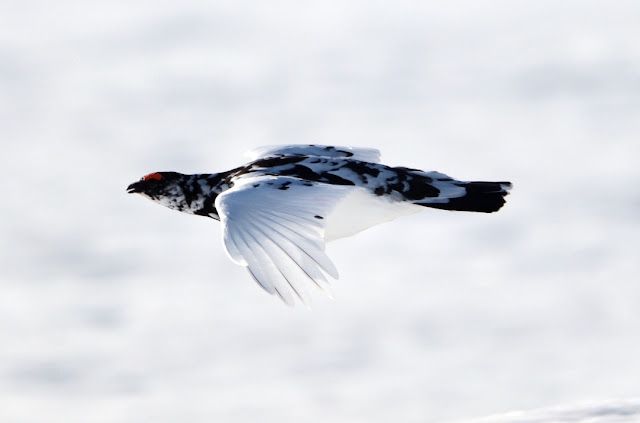 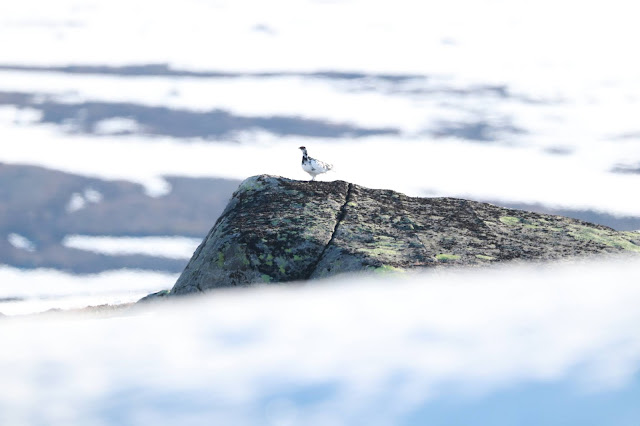 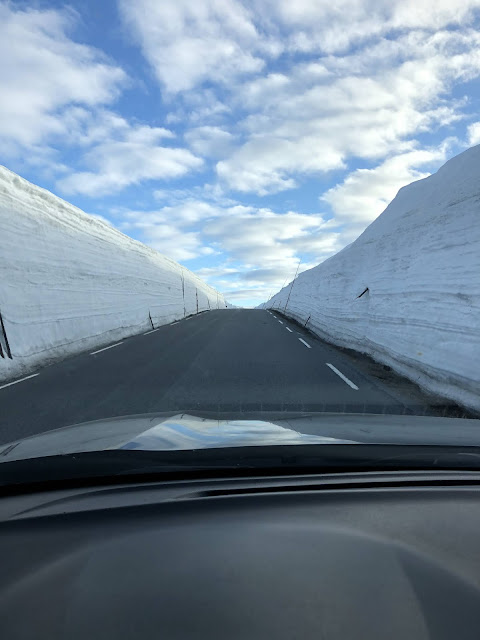 Yesterday afternoon I had my first guiding session for a while and took Norwegian photographer, Eirik on the gold plated Maridalen tour. Eirik had mentioned Wryneck, Three-toed Woodpecker and Black-throated Diver as species we wanted to get photos of and these were all duly chalked up😊
It was about far more than just chasing species though and we had a fun and successful afternoon. We discovered the nest site of the Three-toeds which again was below head height and will allow lots of exciting observations in the coming weeks. We had a Sparrowhawk giving one of the adult Tawny Owls grief, we watched a Goldcrest collecting food and then saw its amazingly well hidden and tiny nest. We saw a young Hawfinch that could barely fly, a pair of Long-tailed Tits collecting food and singing Blackcaps, Wrens, Willow Warblers, Redwings and many more species entertained us.

I don’t normally take too many photos when I am guiding but this time I just had to – over 300 in fact!

Today, I took a long overdue trip out to Gressholmen which is the best place in Oslo for waders. I had a hope to find Broad-billed Sand but had to make do with 6 Ringed Plovers. There were very few Common Terns to see and two islets that had breeding colonies last year were empty. Hopefully it is just a case of them breeding somewhere else this year. 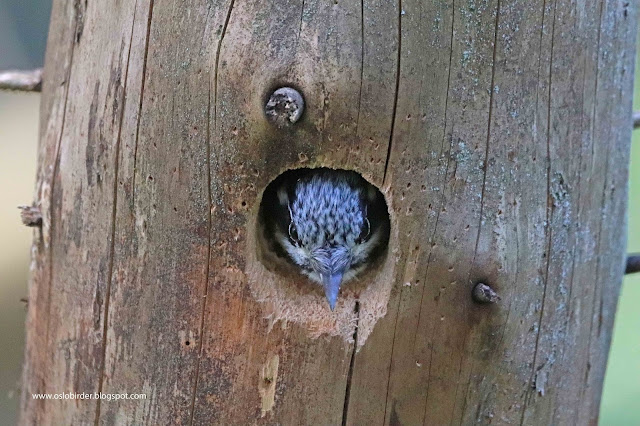 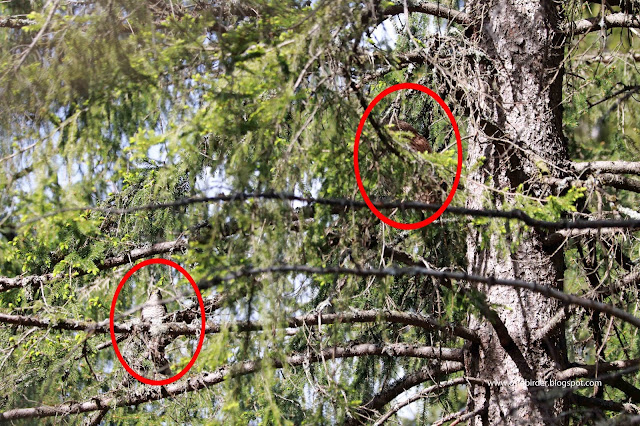 and some pictures from today 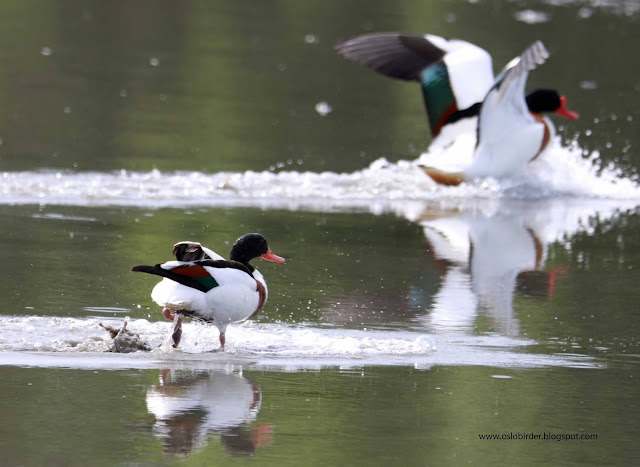 Brook Lampreys and other things

After making a big deal of Wryneck in my last post I have been entertained daily by the singing unpaired male and today discovered a pair in Maridalen who seemed to be nesting (although I didn’t locate the nest). I have had distant sightings of Honey Buzzards but am no closer on my quest of finding out where they breed although apparently it is much easier from July onwards to locate them.

Three-toed Woodpeckers after seeming to be everywhere are now difficult to find and I can only find a single male. I assume that the females are on eggs and that once the young hatch they will become more active again. Three-toed breeds a lot later than both Great Spotted and Black who both have large young in their nests now.

An unexpected highlight yesterday was noticing some eel like fish in a tiny stream. They turned out to be Brook Lampreys (bekkeniøye) which is an extremely under-recorded species in Norway. The ones I saw were egg laying and they will apparently all die very shortly afterwards. It is a fascinating species and it is well worth reading about them, for example here on Wikipedia.

There are quite a few dragon and damselflies out now and all I have managed to identify are the same as the species I posted last time which I have now had confirmed as northern damselfly / spydblåvannymfe / coenagrion hastulatum and northern white-faced darter (ruby whiteface) / østtorvlibelle / leucorrhinia rubicunda.

This afternoon I had my first guiding session for a while with a Eirik, a Norwegian photographer who had a few species he wanted photos of. Wryneck, Three-toed Woodpecker and Black-throated Diver were at the top of the wish list and luckily I know where to find them 😊 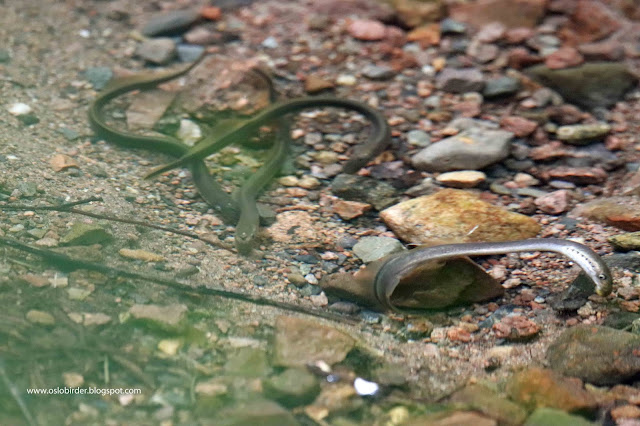 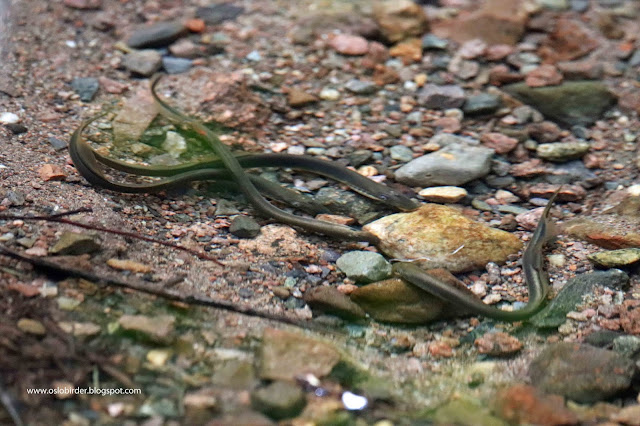