Playing away from home

With rain in the air yesterday I abandoned Maridalen and headed for Årnestangen with a hope of a wader bonanza. There was rain but no bonanza with a meager 12 Dunlin as the most numerous species. There was a bit of variety though with Temminck’s Stint, Grey Plover and Knot the scarcest waders. I had 5 Marsh Harriers (Hen and hopefully Pallid should also arrive soon) and an adult White-tailed Eagle and best of all the two Great White Egrets which have now been here for a month.

It rained really hard today but was far too much (and lots of lightening) to make the prospect of another trip to Årnestangen appealing. I instead popped into Maridalen where the Beast and I got soaking wet but did have a couple of Bluethroats and a Hobby as reward. The hide at Østensjøvannet seemed like a good idea – it might be useless as a hide but does keep you dry in the rain – although the hoardes of hirundines and terns and Little Gulls that I had hoped for were not present. I did however find a Slavonian Grebe (less than annual here) and a couple of Little Grebes which were first found a couple of days ago. 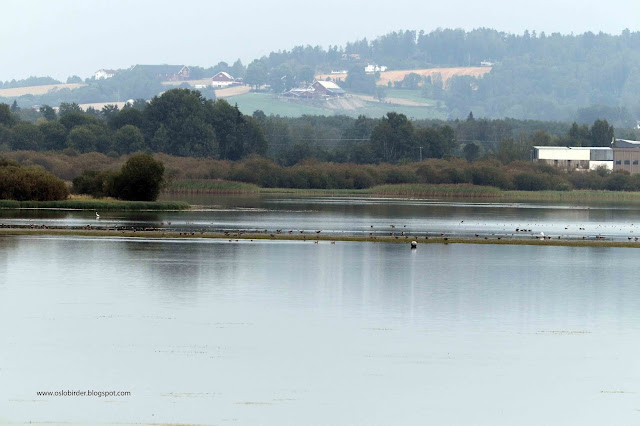 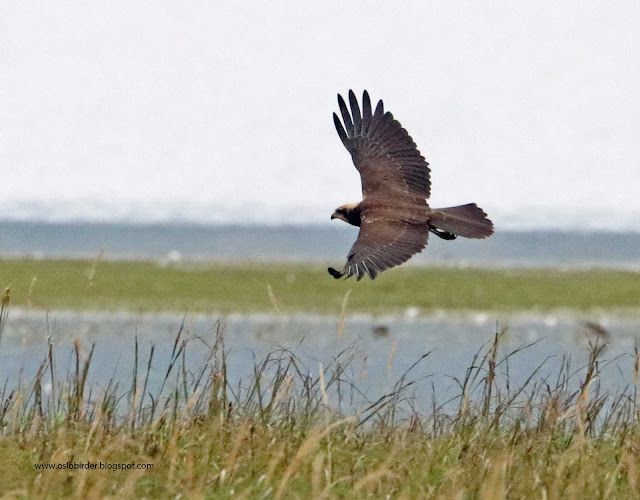 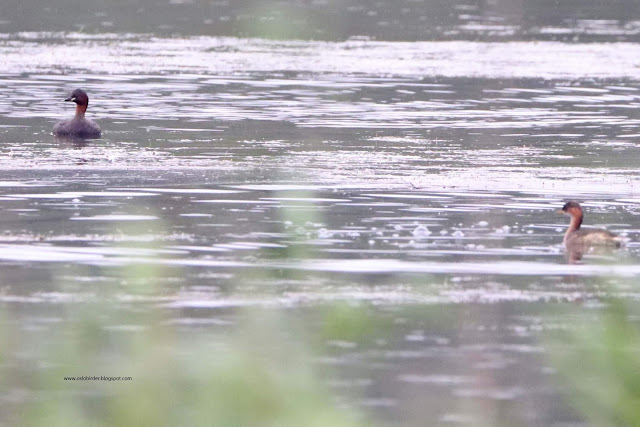 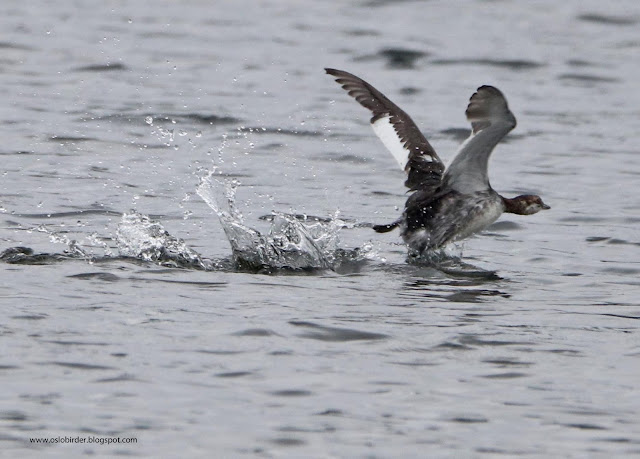 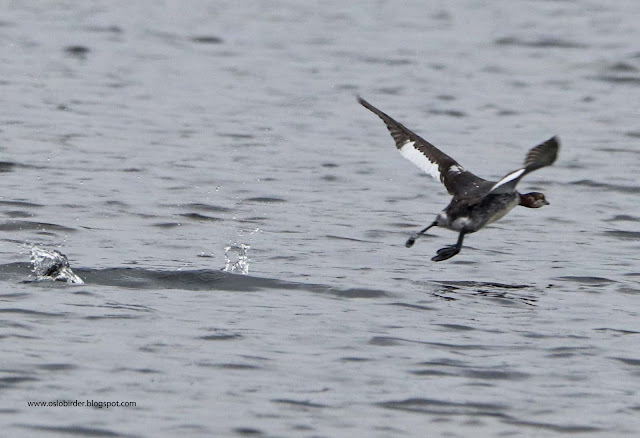 Where else would I be than Maridalen today? It was hot, almost too hot and a record temperature was set in SW Norway today. Bird wise I had pretty much the expected species but there is always something new. Both Pintail and Lesser Spotted Woodpecker were new for the year for me in Maridalen and a male Red-backed Shrike still feeding three begging young might indicate yet another pair that has bred in or very close to the Dale. I only had one Honey Buzzard sighting today (although didn’t spend too much time looking) and this was a female and seemingly a new bird.

Dragonflies were everywhere and my raptor spotting was made difficult by the sheer number of them in the air which frequently fooled me into thinking I was on to a distant raptor (strangley enough I had no Hobbies eating them). Most of the large species were so active that it was impossible to see what they were but I managed to identify Southern Hawker (blågrønnlibelle), Brown Hawker (brunlibelle), Common Hawker (starrlibelle), Golden-ringed Dragonfly (kongelibelle), a late Four-spotted Chaser (firflekkbredlibelle), Black Darter (svarthøstlibelle), Yellow-winged Darter (gulvingehøstlibelle), Ruddy Darter (blodhøstlibelle), Vagrant Darter (sørhøstlibelle) and Emerald Damselfly (nordmetallvannymfe). In addition, I almost certainly saw Common Darter (Senhøstlibelle) and Common Blue Damselfly (innsjøvannymfe) which I know are there are the moment but I did not document them. I may also have had a Migrant Hawker (septemberlibelle) but managed no photos and this would be a good record.

Butterflies were also very numerous today even if the diversity has become much less. Red Admirals are now the most numerous, followed by Small Tortoiseshells and Painted Ladies with just a few Peacocks, Brimstones and Green-veined and Small Whites. Thistles attract all these species and seeping sap on birch trees proves especially attractive to the Red Admirals. 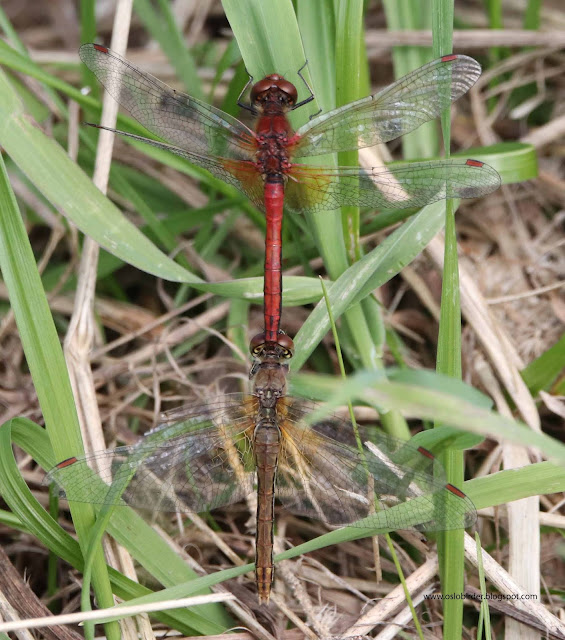 Keeping to the Dale

We are having a mini heatwave with temperatures up to 25C this afternoon but in the morning there was a heavy fog hanging over Maridalen that didn’t lift until nearly noon. Just after the fog lifted and it suddenly became hot there was a lot of (mosly distant) Honey Buzzard activity with at least 6 birds around the Dale. I had also heard one calling in the mist earlier. One male Honey Buzzard was active in the area where I saw another male on three occasions last week showing that different birds use the same areas to search for food. I also had three sightings of Hobby with at least two birds as I saw an adult and a 1cy.

Three Red-backed Shrikes and a  Bluethroat were still present and a Wryneck was new. I also had my first Wheatears of the autumn and Meadow and Tree Pipits and Willow Warblers were more numerous. Other birds included Crane, Goshawk, Whooper Swan, Red-throated Diver, Black Woodpecker, Whinchat and Nutcracker.

Yesterday was a VERY interesting day in the Dale. After all of Thursday’s rain I had expected there to be more migrant passerines on the deck but that was not the case. Instead we were back to Tuesday’s numbers with still 4 Red-backed Shrikes and a Bluethroat in the fields at Kirkeby. The Cranes were also still on theit favoured field so when I saw them circling high up on Wednesday this must just have been to stretch their wings

With a cloudy but warm morning leading to a sunny and hot afternoon I was hoping for some Honey Buzzard action and I was not to be disappointed. From my chosen watch point I was able to watch a male (the same one that I took pictures of on Tuesday and Wednesday in the same area) repeatedly flying with food to a (presumed) nest. In the course of 2 hours I saw him 6 times – 3 times heading NW with food in talons and 3 times heading back SE about 15 minutes later. He flew out of sight both to the NW and SE so I could not see where the nest or feeding site were but it was fascinating to watch and must count as proof of there being young in the nest. The food items look to be the (expected) wasps nests and were very thin sections. It would be absolutely fascinating to be able to follow a Honey Buzzard from when it wakes up and goes out searching for a wasps nest – it must have to pick up individual wasps and then follow them back to their nest! I would love to see it in action digging out the wasps nest (they are normally underground), dealing with the angry wasps and dividing up the nest into sizes it can carry (how many visits does it have to make to take the whole nest?)

This bird had a distance of at least 4 kms between the presumed nest and feeding areas so they cover huge areas in their search for wasps. One of the reasons that I see Honey Buzzards far more often in Maridalen in late August than earlier must be that the nests are in the forest 1-2 km from the valley and that they presumably are able to find food closer to the nest early in the season but have to travel more widely later as the young get larger and need more food and the locals wasps nest have all been located.

I only had one other Honey this time which was a bird that seemed to be migrating purposefully SSE. Other raptors were also less noticeable with only 2 Common Buzzards, 3 Sparrowhawks and an Osprey.

Biggest surprise of the day though came when I was scanning to try to find the Honey heading back north for the 4th time when I saw a flock of waders quite high up. I got them in the scope and they were 8 Grey Plovers heading SW!! Yet another new species for Maridalen and an Oslo tick for me. When I have been at Årnestangen and seen waders falling out of the sky I have always realised that there is a mostly unseen migration going on high over us so it was satisfying to witness it for once.