I was guiding Ramona from Deutschland today. Guiding at this time of the year is a much more challenging task than in the spring or early summer when I know where to find breeding birds and birds are singing and generally easy to find. At this time of the year there is much less activity and although it is autumn migration it can be hit and miss as to whether you find something interesting. Today was a pretty good day though J

The number one priority was Nutcracker. We had at least 6 birds but all were in flight or distant scope views of a perched bird. Of course, in the evening by my house I had a bird perched eating hazel nuts just metres from me but that’s the way it goes in birding…..

We had the Nutcrackers in Maridalen which also delivered Bluethroat, Red-backed Shrike, Whinchat, Whooper Swan, Peregrine and Goshawk.

Our other destination for the day was Årnestangen and Nordre Øyeren where we had Hen Harrier, Marsh Harrier and Osprey on the raptor front and amongst Dunlin, Ringed Plovers and Ruff we picked out Sanderling and Little and Temminck’s Stint who at one point educationally stood side by side. We had a lot of geese with over 500 Barnacles (where do they come from) and even more Greylags which reminds that it will soon be time for the Taiga Beans to pass through the area.

I wasn’t expecting to have time for birding but when the forecast rain was combined with much fresher than forecasted southerly winds I thought I would squeeze in some time at Fornebu. There was so much wind (at least double the 5m/s that the forecast was telling me) that windsurfers were also checking out the conditions but there were no seabirds to be seen in a short watch. At Storøykilen though there was some excitement with a Spotted Redshank (only my second record at Fornebu) and a Red-backed Shrike. Otherwise though there were very few birds with (amazingly for the time of year)  only three of Willow Warblers but I did manage to find a Bluethroat.

Regular blog updates must mean I am getting back in the flow and that there are birds to blog about.

I haven’t been out to Årnestangen for a bit as water levels have been high with very little mud exposed but a check of the relevant website showed that water levels had fallen by around 30cm over the last 4 days (it always amazes me how fast the water levels can both rise and fall in a delta covering 55km2).

There was still not a vast amount of mud but too much and it becomes difficult to make out what is out there. There were waders though and one of my remaining bogey year birds fell with 6 Little Stints present. Curlew Sandpiper still has to wait though. Three Turnstone, a Sanderling and a Temminck’s Stint were the scarcest birds among 40 Dunlin and 30 Ringed Plovers. Raptors were very thin on the ground with the undoubted highlight being a young Hen Harrier that showed well enough to dispel any hopes of something rarer.

Duck numbers and variety are starting to build up and a Shoveler and two Pintail new in.

A quick stop in Maridalen gave me a young Bluethroat showing very well and a Honey Buzzard. My comment on Thursday that they clearly hadn’t bred in the area was followed by my sighting on Friday, Halvard H seeing and photographingone on Saturday and then this bird today (I need to find some other good birds to write negatively about...). Based on plumage all three sighting could very well relate to the same adult (a female?) which then does suggest that there is successful breeding in the area and that this bird in looking for food for large youngsters in the nest. I have read a couple of comments that this is a bad breeding year for Honey Buzzards and that those with young in the nest still have surprisingly small birds so it could be that we will have more frequent HB sightings over the next couple of weeks. 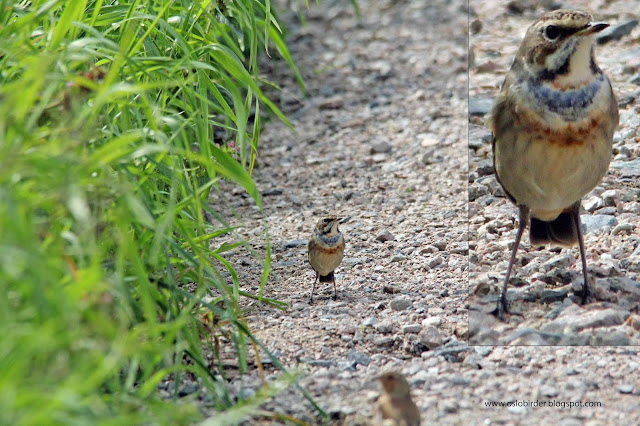 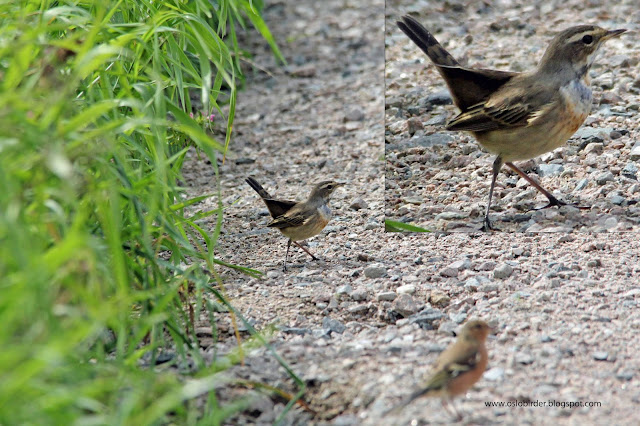 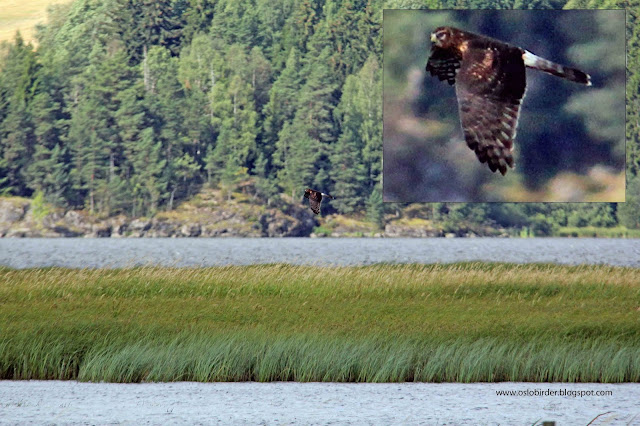 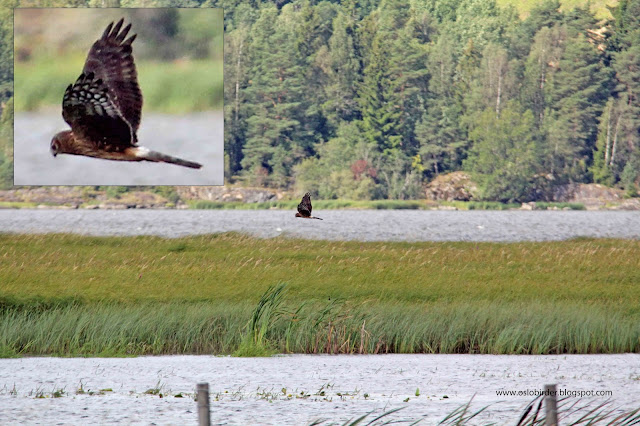 After yesterday’s bemoaning if the lack of Honey Buzzards it will come as no surprise that the first species of note I saw was indeed a Honey. It flew very low over the road in front of me and although I had my bins on my lap they were hardly necessary. My camera though was in my bag on the back seat and by the time I had got it out the Honey had flown (behind some trees). I tried in vain but didn't manage to refind it.

But my honey was just the start of things: Red-backed Shrike, Lesser Spotted Woodpecker, Cuckoo and best of all Kingfisher! I discovered the Kingfisher when I heard its call whilst eating my lunch. It was a devil to see let alone photograph but called every now and again. This could well be one of the youngsters from Sandvika where at least two broods have fledged but could also have come from as far as Sweden.

There was a fine supporting cast of Whooper Swan, Nutcracker, Long-tailed Tit and Crossbill - shame I wasn't guiding....

I spent a lot of time sky gazing and had at least 4 Common Buzzards, 2 Sparrowhawks and also a Goshawk which becomes my tenth and a half raptor this week :-)

With only three days since the last update I might be approaching some sort of regularity again with the blog. On Tuesday, I was guiding Neil and Thomas from the States. It was a strange morning with frustratingly few birds (i.e. not a single Fieldfare in 4 hours!!) but we did have good views of Red-backed Shrikes and Yellow Wagtails among others.

I have been moaning the lack of raptors and especially Honey Buzzards but over the last three days I have managed 9 species including great views of Honey Buzzard so maybe things are loosening up.

Yesterday in Maridalen I had 5 Common Buzzards including a group of 4 thermalling together, plus single southward migrating Hobby, Kestrel and Sparrowhawk. I had a brief glimpse of a probable Honey Buzzard but not enough to be certain. What is certain though is that the Honey Buzzards (2 pairs?) that have bred close to Maridalen in the last two years have not bred (or at least not successfully) this year because I have now put in enough hours that I should have seen them carrying food by now. On Tuesday I also had an Osprey in Maridalen following one on Monday that flew low over the house.

Today I visited Hellesjøvannet where I finally got to enjoy Honey Buzzard in 2017 including a perched bird which gave my best ever views although the scope was necessary. When I arrived a juvenile Marsh Harrier was flying around calling (a locally bred bird) and whilst watching this I became aware of another raptor which had just flown over my head as the harrier flew up to it. I expected it to be an adult Marsh Harrier coming with food but no it was an adult Honey Buzzard! The two then interacted quite low over the reedbed before the Honey landed openly in a tree. It stayed here preening before disappearing into the trees. Intrigued as to whether there was a nest or if it was feeding I made my way around to the woodland (not an easy task). Here I didn’t find the Honey in the woodland but heard the juv Marsh Harrier calling and became aware of an adult male Marsh Harrier that had probably just delivered some food. This bird then started thermalling and just after it had disappeared from my view I heard another raptor calling. I wasn’t initially sure which species it was but then picked up first one and then two Honies which flew over me calling. They continued calling but I couldn’t see them because of the trees before they then reappeared in the company of a Common Buzzard! For the next 15 minutes or so there were Honies in constant view (probably 4 different birds but it could just have been the original two covering a lot of ground). In addition to calling there was also wing clapping. It was all very exciting but then it clouded over a bit and that was it – I didn’t see any more of them over the next two hours. Other raptors showed though with at least 16 Common Buzzards in total including 9 in one scan, a single Peregrine, single Hobby, two Merlins and a Sparrowhawk.

The lake hosted 9 Pochard, a pair of Whooper Swans with a single youngster, 800 Greylags, 19 flyover Ruff that looked like they wanted to land on the water amongst the geese and two Water Rails called from the reedbed.

So, I now feel that I have had a good dose of raptors but still want a Honey in the Dale. The reason that the end of August is so good for raptors is that the local breeding Common Buzzards have youngsters that need flying practice, Honey Buzzards have large youngsters in the nest that need lots of food so the parents become more visible as they fly around looking for wasps’ nests, and all the smaller raptors and harriers are starting to migrate and turn up all over the place. So all you need to do is wait for a sunny day (good for thermalling), find an area with a good mixture of habitats and ideally a wetland and find a good vantage point that allows you to see a lot of sky and just start scanning the whole sky with your bins. With a bit of patience the results are worth the sore neck, arms and back (smart people would take a chair…)

A quick stop in Maridalen on the way home today revealed a juvenile Cuckoo which was a species I had given up on seeing in Oslo this year. I was able to watch it at close range as it hunted caterpillars and it seemed clear that it was using hearing to locate them! It would frequently cock its head and once I saw it suddenly turn its head and then body (still with cocked head) before launching itself into some grass a couple of metres away and catching a large juicy caterpillar.

Watching the cuckoo I was reminded of how raptor like they are (often being confused with Sparrowhawk) and reckon that my raptor count for the last three days can be raised to 9 and a half species ;-)


And quite a few pictures of the juvenile Cuckoo: 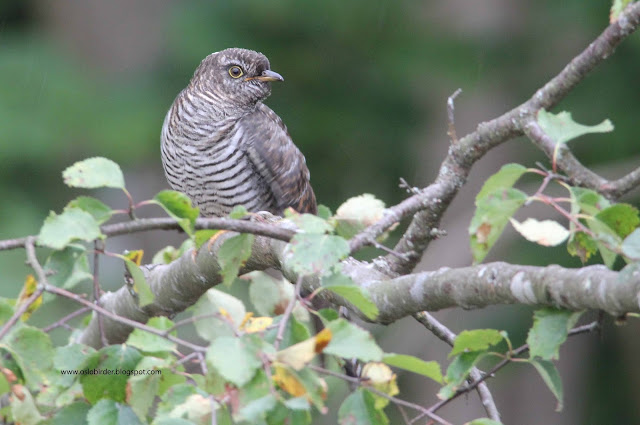 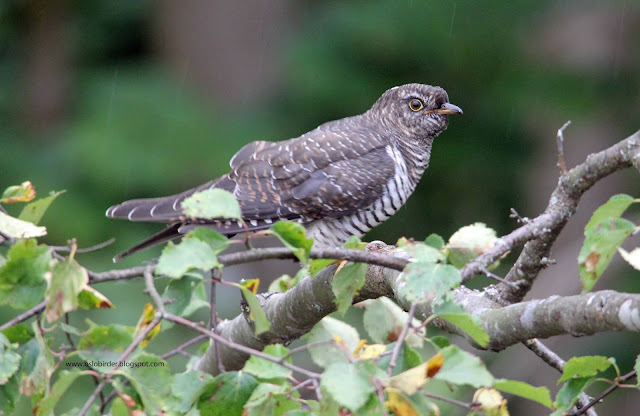 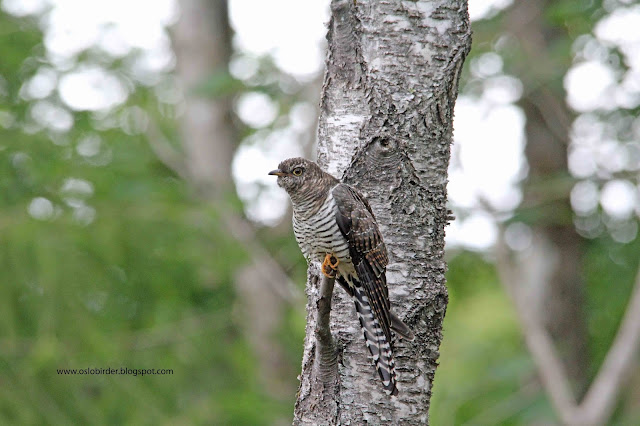 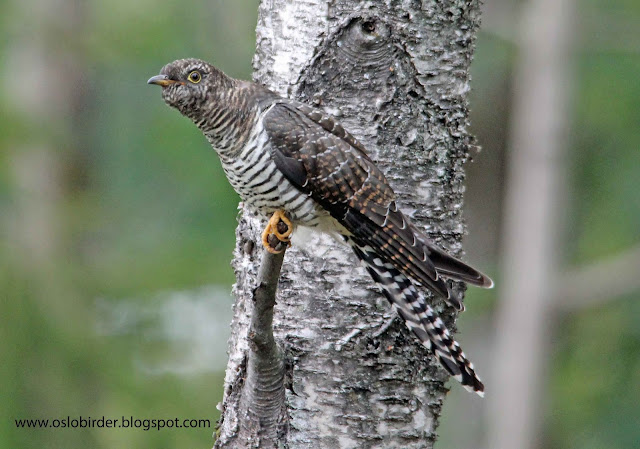 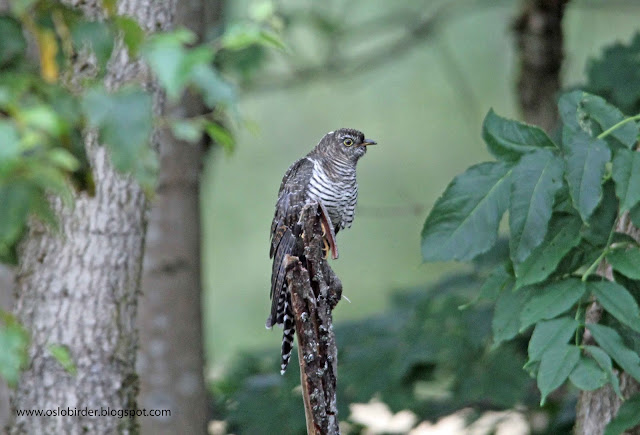