I am now finally at home after a long and very enjoyable summer holiday in northern Norway. I have lots of things to write about but it will take time to go through all my pictures and videos. By the end of the holiday I had filled up all three camera memory cards I had with me, I had no room left on my mobile phone and the hard drive on the PC was also full. I got to the stage where I was forced in the field to spend time deleting photos just so I could take new ones and this resulted in a number of missed opportunities. At home I have now had to make (lots of) room on the PC before I could download from the camera and have enough free memory such that I am able to edit videos.

That part of the job is now done and I just have all the thousands of pictures to go through. I will start with the very end of my trip when on my drive home (the ladies took the night train home from Bodø) I spent the night near Beitostølen which we hadn’t visited this summer but which I felt the need to visit if only for a day. My specific goal was to see male Pallid Harriers. Amazingly enough at least three males have been noted in June and July along Jotunheimsvegen which is a scenic tourist road running between Valdresflya and Beitostølen. They are clearly taking advantage of good numbers of rodents in the area and there have also been reports of numbers of Hen Harriers, Short-eared Owls, Rough-legged Buzzards and Kestrels also attracted to the area.

When I arrived on Thursday evening there was low cloud and rain and I spent over three hours searching before I finally found a Pallid at 21:20 (I had seen a male and a female Hen Harrier). It was perched on a fence post right by the road but flew just as I tried to take a photo. It did then show well in the scope for about 10 minutes although distance and light didn’t make for good photos before it disappeared behind a hillside. I slept in the car and awoke before 7am expecting even worse weather which had been forecast but it was actually better light, with higher cloud than the previous evening, no rain and even the odd short period of sunlight.

I had to search again although the search was enlivened by Short-eared Owls and a couple of Hen Harriers but then finally at 0845 as I was driving along I saw a suspicious grey lump on a rock and it was a male Pallid!! I was able to watch him well mostly perched but also flying and once being mobbed by a Kestrel. I also managed to get fairly close although the light was still not the best. I enjoyed this bird until 09:25 before it disappeared around a hillside. I returned to the car and went searching for it and at 10:00 when I was around 2km away I saw a male Pallid Harrier. It looked like a different bird but after a while I managed to convince myself it must be the same bird with the perceived differences in wing pattern and moult being down to posture and lighting. I enjoyed this bird until 1020 before it too disappeared around a hillside heading in the direction of my first sighting.

I tried unsuccessfully to relocate the bird before widening my search and driving the 2km to the scene of the first sighting and bang! at 10:40 there was a male Pallid sitting on a rock right by the road. It was on the wrong side of the car meaning I had to drive close before I could get an angle for a photo but this time I did manage a couple of shots before it flew. Watching it in flight I gradually had to accept that there were two birds as this was clearly the same bird as I saw at the same site earlier in the morning but was also clearly not the same bird I had seen 2km away just 20 minutes earlier as the differences in moult and wing tip pattern were consistently different and could not be explained anymore by light or posture. I was able to watch this bird for around 10 minutes before it plunged after some prey and I didn’t see it come up again.

I saw no evidence of breeding although did see a female Hen Harrier in the same area as one of the birds. There was however nothing in behaviour to suggest breeding and at this time of the summer there should be large young in the nest or newly fledged that require food. One male had started its moult but hadn’t come very far whereas the other male had come a long way in its moult which is also suggestive of a non-breeding bird.

That at least three male Pallid Harriers should have spent the summer in the same area is amazing but it is perhaps even more amazing that no adult  female turned up such that there was breeding although there is a single sighting of a 2cy female in the same area.

Enjoy the video and pictures.

This year’s summer holiday hasn’t followed the tried and tested formula of the mountains around Beitostølen and then northern Norway around Bodø. Instead we headed straight to Bodø once the school holidays started. I therefore got to bird the fjord at Fauske/Klungsett earlier than previously and my hope was to follow the build up of moulting ducks and to at least refind the Asian White-winged Scoter (Stejneger’s Scoter) from the last two years and the Surf Scoter from last year plus to find something else new and exciting (American Black Scoter would be a nice find for example).

I had my first check of the ducks on 3rd July (compared to the 7th in the last two years). There were fewer birds than later in the month in previous years with Goldeneye (300+) the most numerous. The best birds were two adult male King Eiders which had only just started their moult when I found them, 3 male Scaup and rarest of all (in local terms) a Great Crested Grebe. But no Knobby (found on 7th in 2016 and 15th in 2015). Despite near daily visits I couldn’t find anything more exciting although Velvet Scoter numbers did start increasing to ca. 300. We then went off to Lofoten on the 10th for a week (will have to cover that in a separate post) and my next chance to check out the ducks wasn’t until today, 18 July. The sea wasn’t that calm but it was clear that numbers had risen. The two King Eiders were still present at Røvika and with a very high tide ducks were feeding close to land. I was hoping to get good pictures of the eiders when I noticed Knobby – so nice of the local birders to let me find him three years running! In overcast conditions the light was not good but he was closer than I have ever had him other than on the day of discovery in 2015 and I managed to study the bill better than ever before. The bill of this bird is quite dull and mostly pink (differs to drawing and pictures of other birds of the species) and makes me quite sure that this is the same bird that has also been seen in Trøndelag. As in previous years he was in active moult with most of his primaries missing so will be around for a while.

Here are some pictures and a video (my best yet of the bird?). More blog posts and video from the holiday will follow at some time. Surprisingly the pictures from the superzoom have turned out better than from the bazooka. 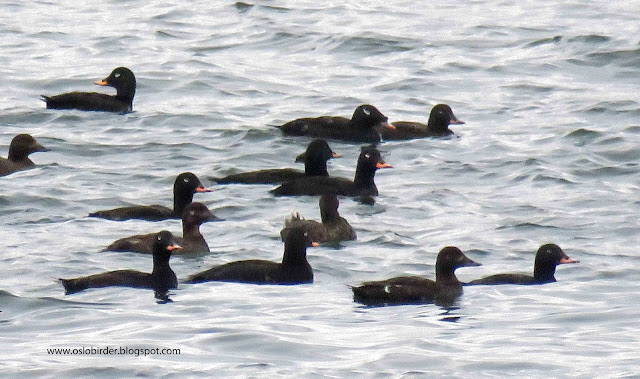 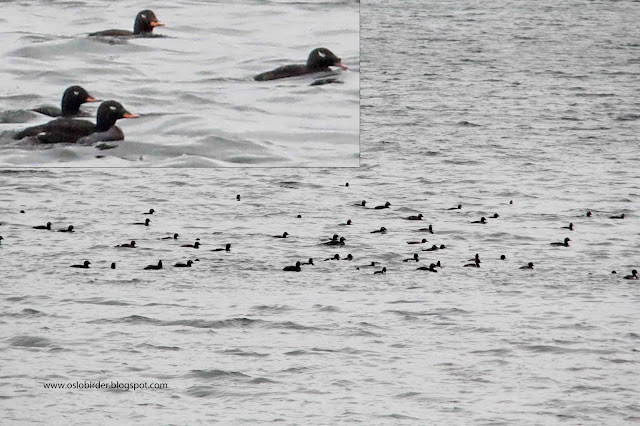 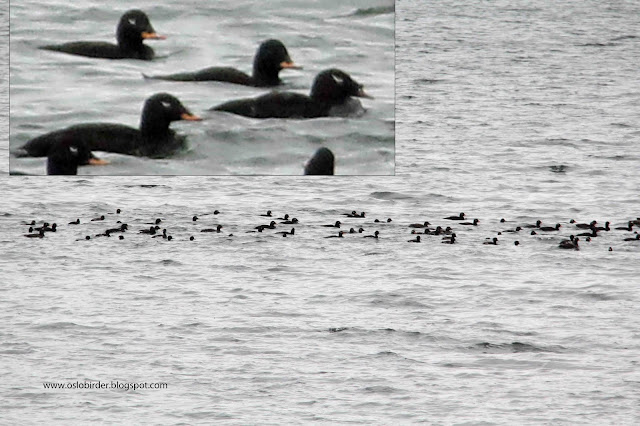 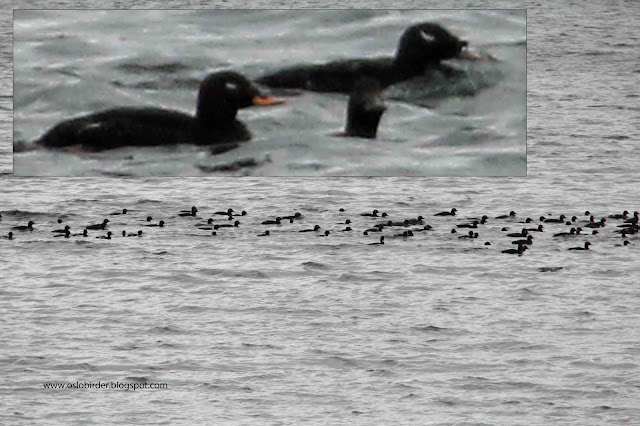 In the absence of time to post anything current here are some videos from earlier in the year. Here is the first instalment.

It is now the summer holidays and the Oslo Birder is now birding in northern Norway.

The 1310km road trip up to Bodø was relatively uneventful except for fantastic views of Little Gulls. They were feeding so close to me that my pictures should have been totally amazing but unfortunately they didn't turn out to be that great. 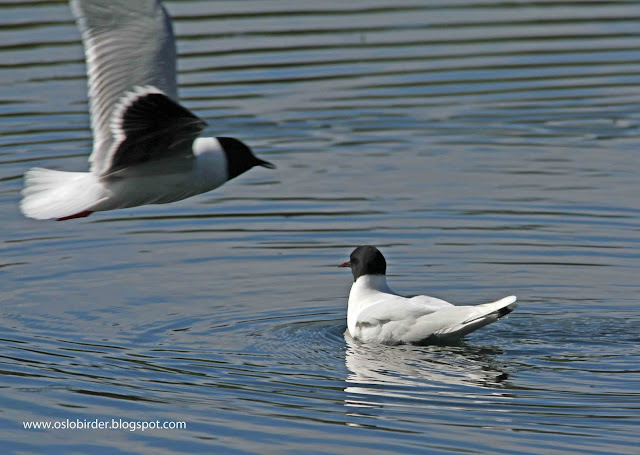 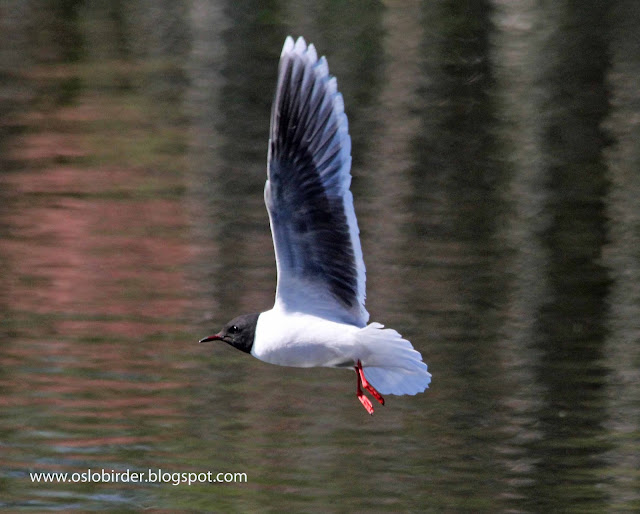 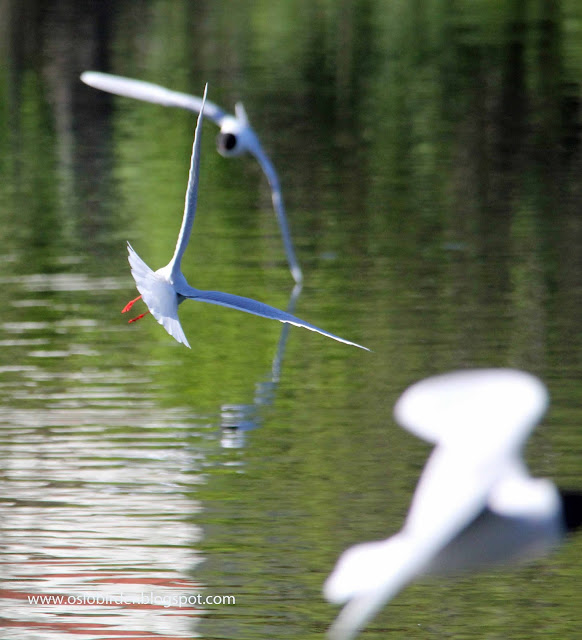 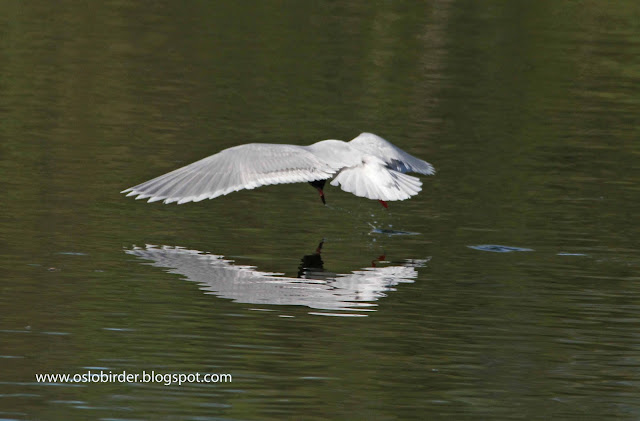 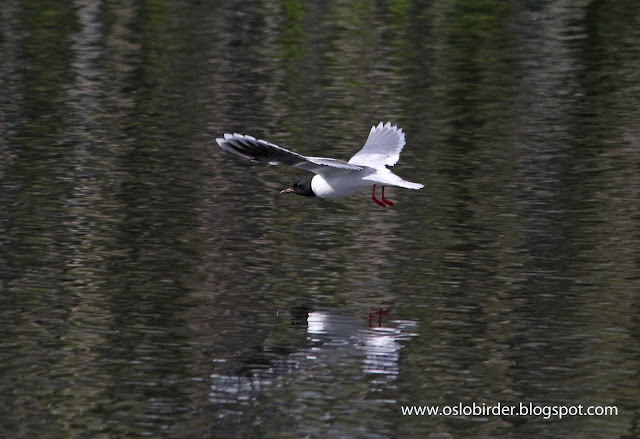 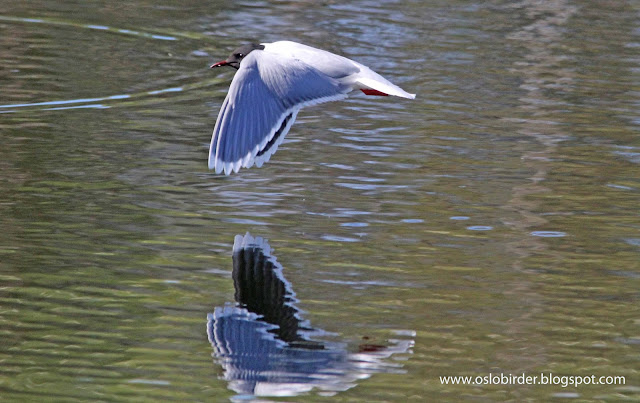 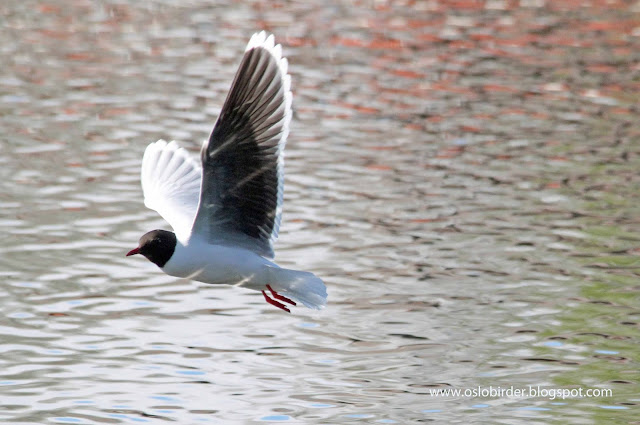 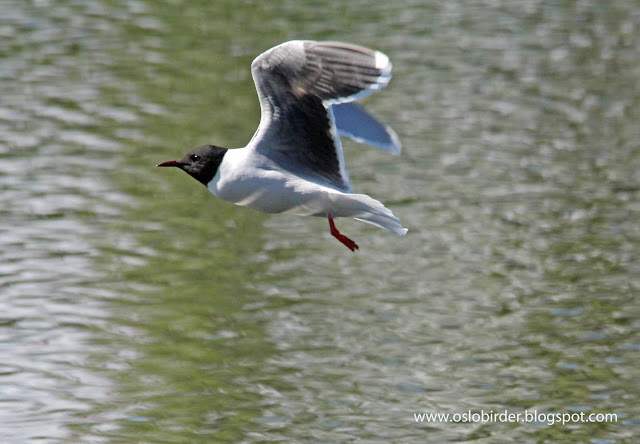 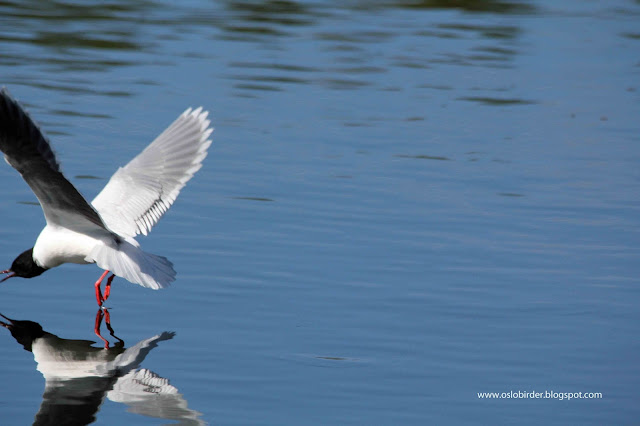 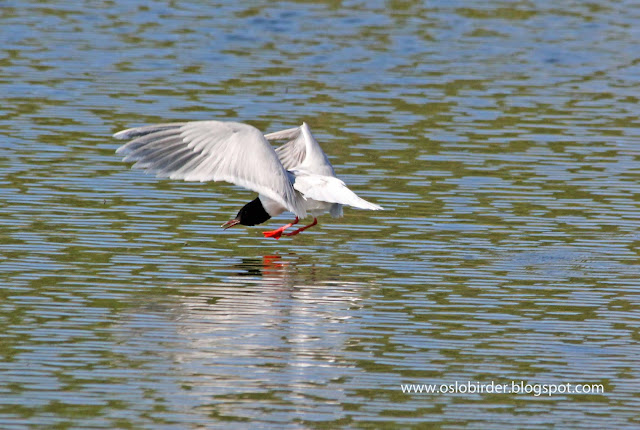 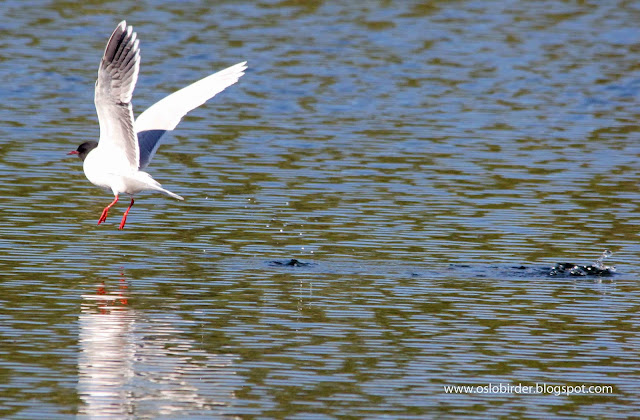 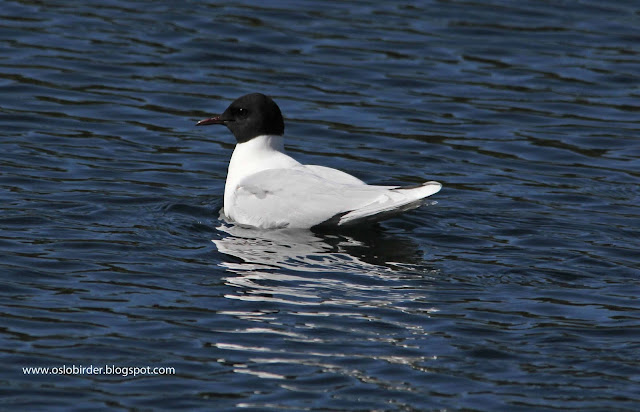 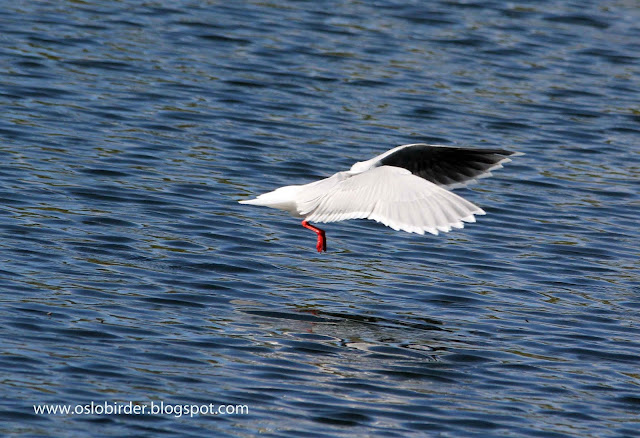 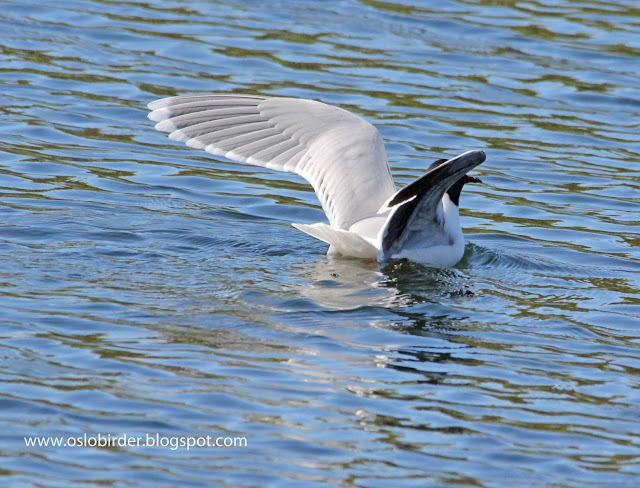 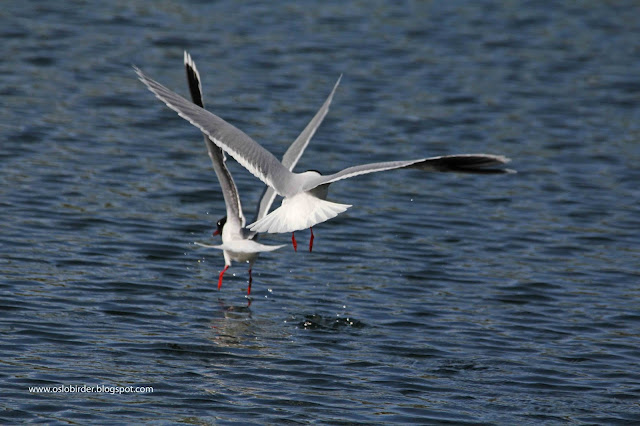 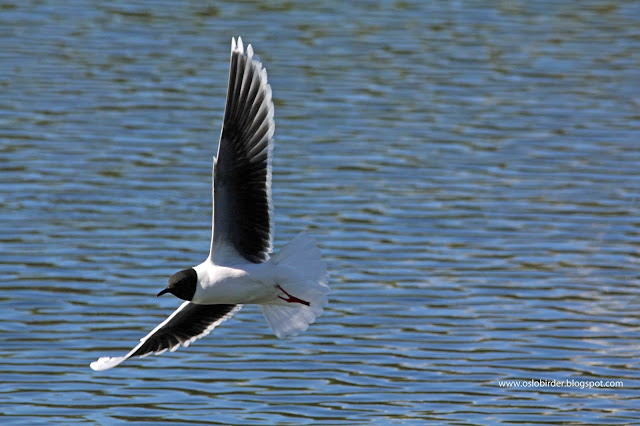 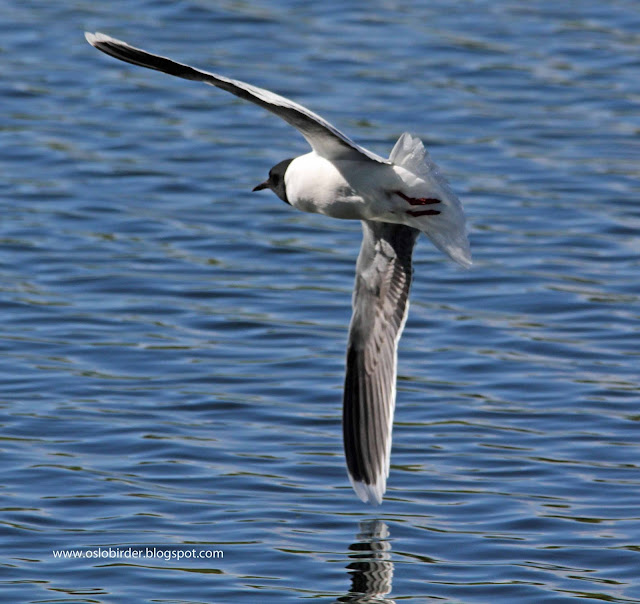 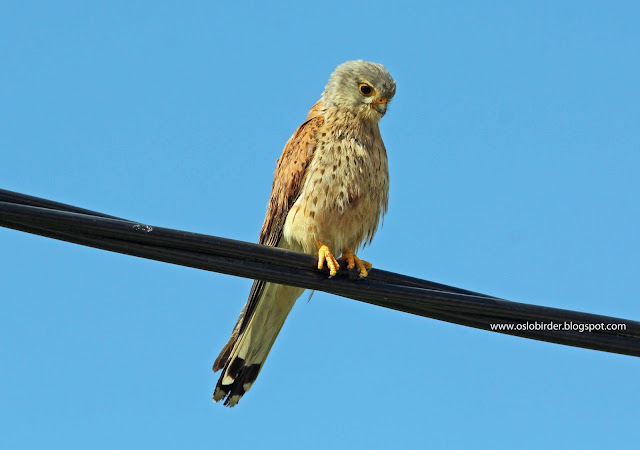