Fourth installment of pictures from the last day (and there's more to come). Some Ringed Plovers (sandlo) on the beach with the Sanderlings were equally as photogenic and close to the Jack Snipe I had three Golden Plovers (heilo). 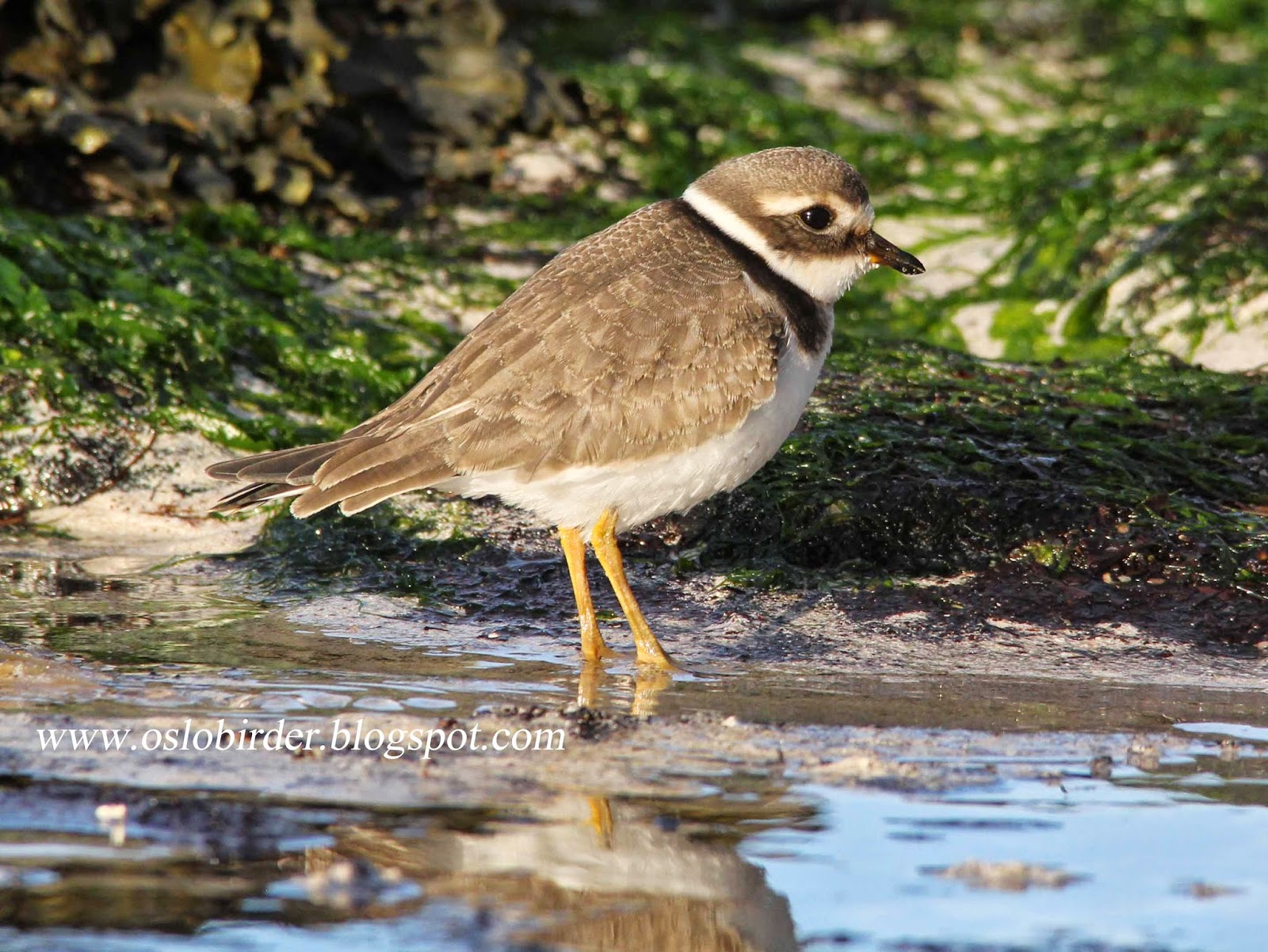 Third installment of pictures from the last day on Værøy with some very photogenic Sanderlings (sandløper). 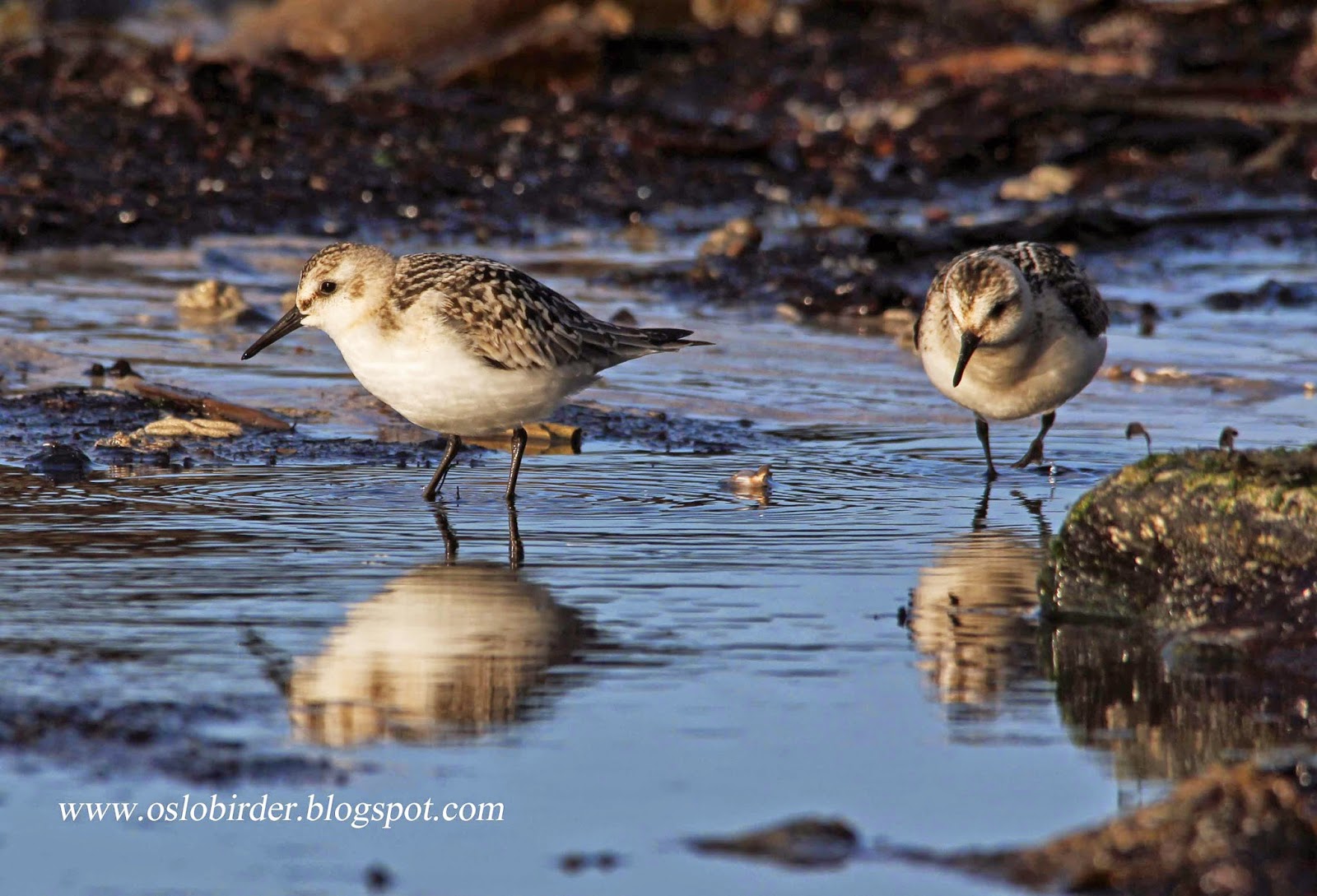 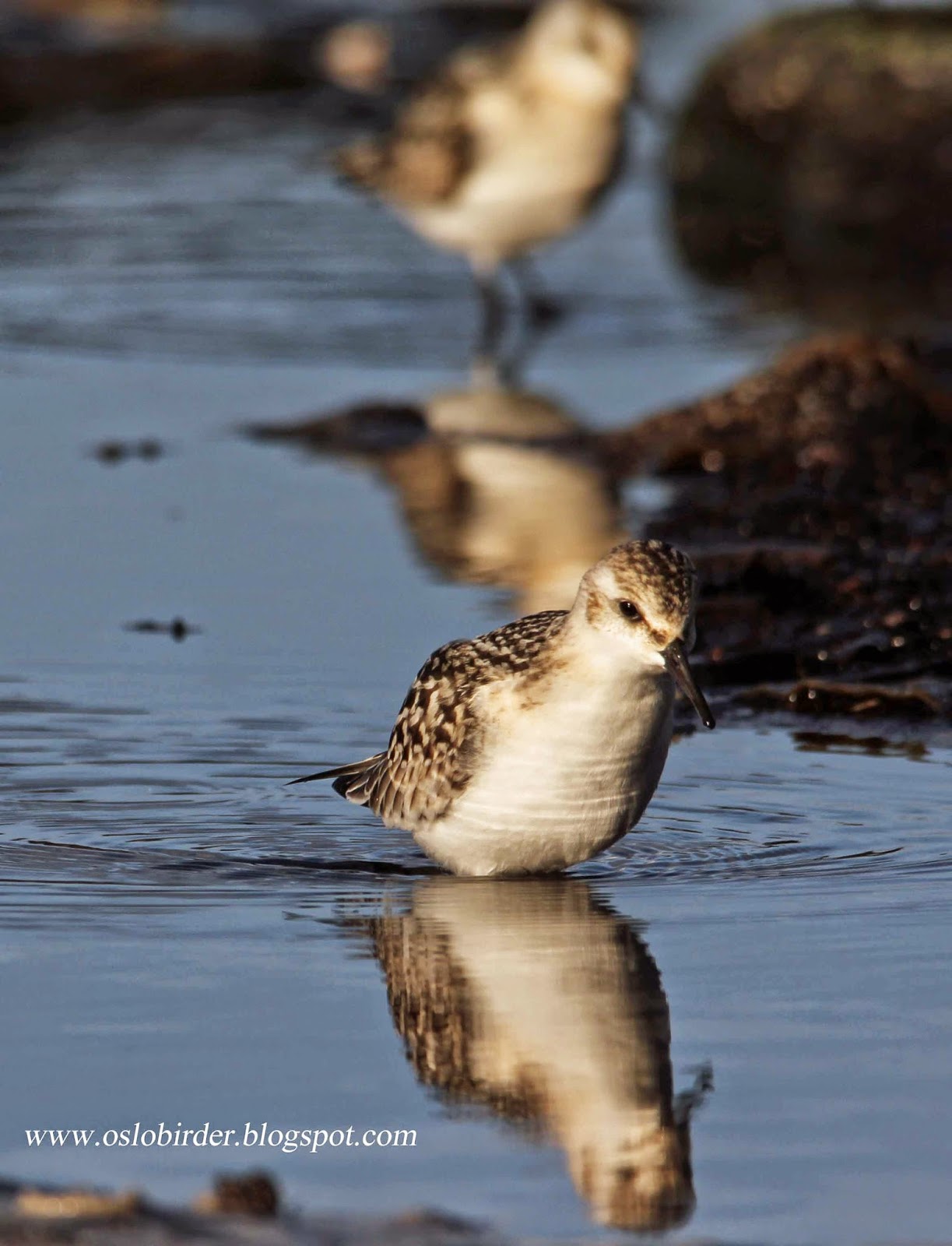 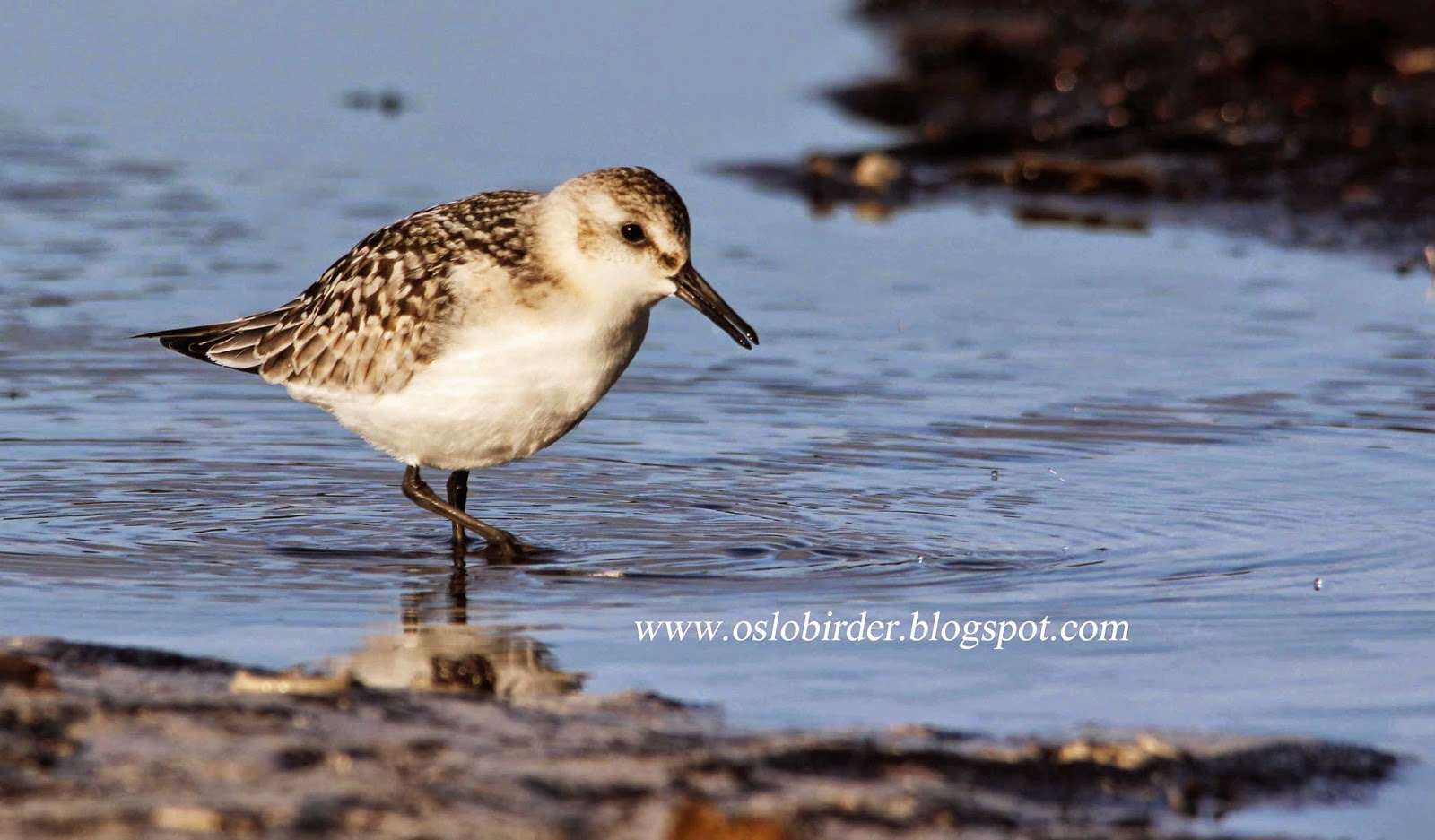 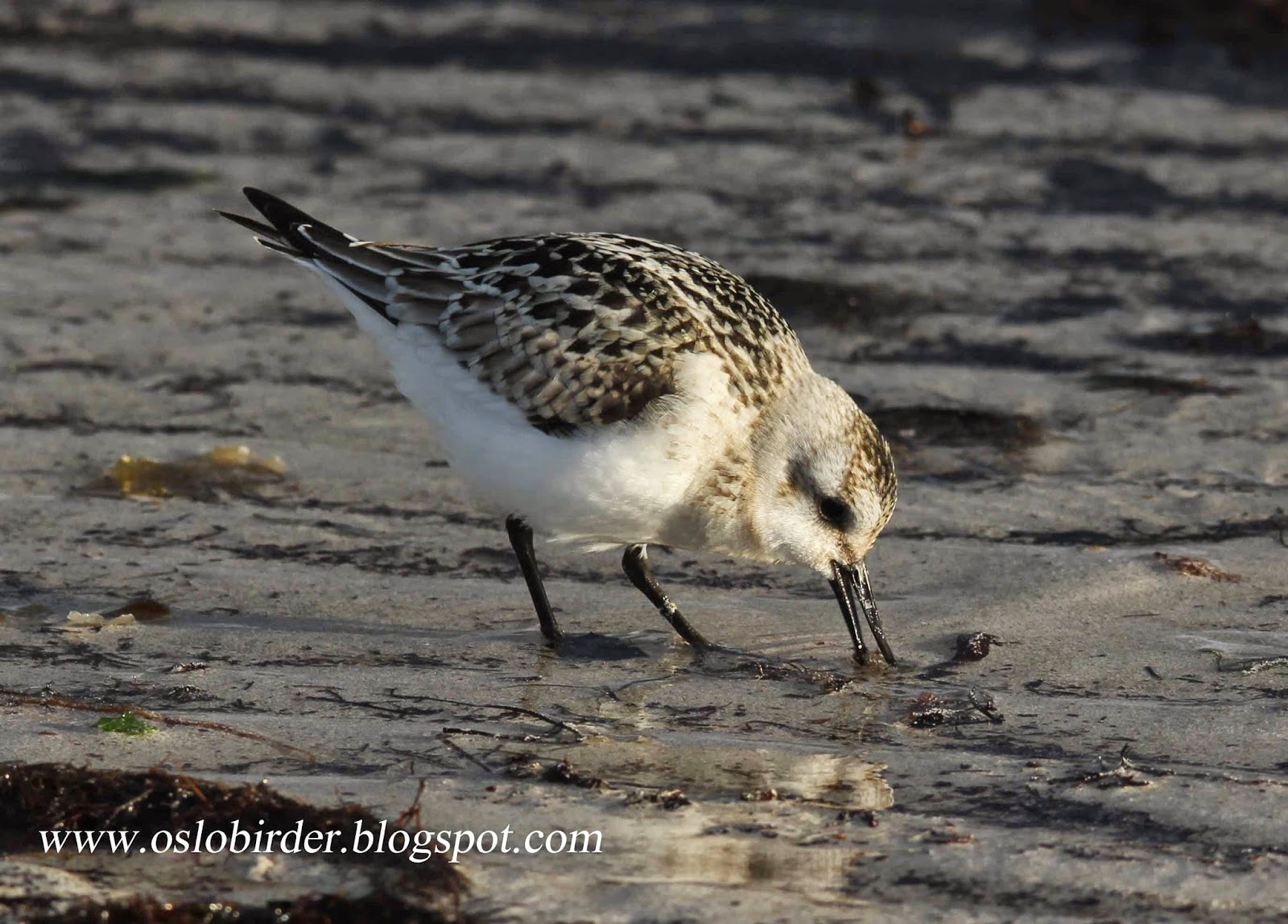 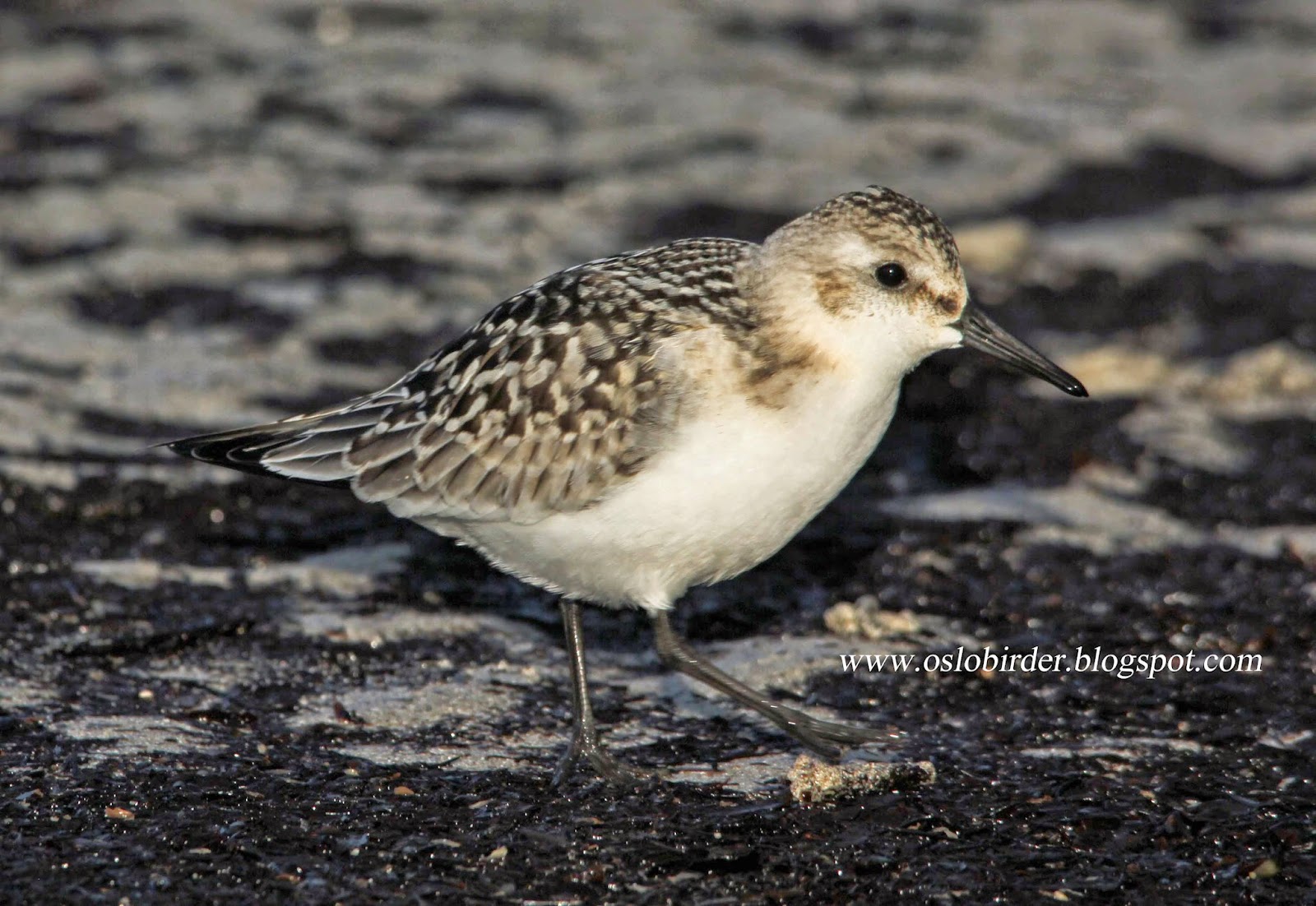 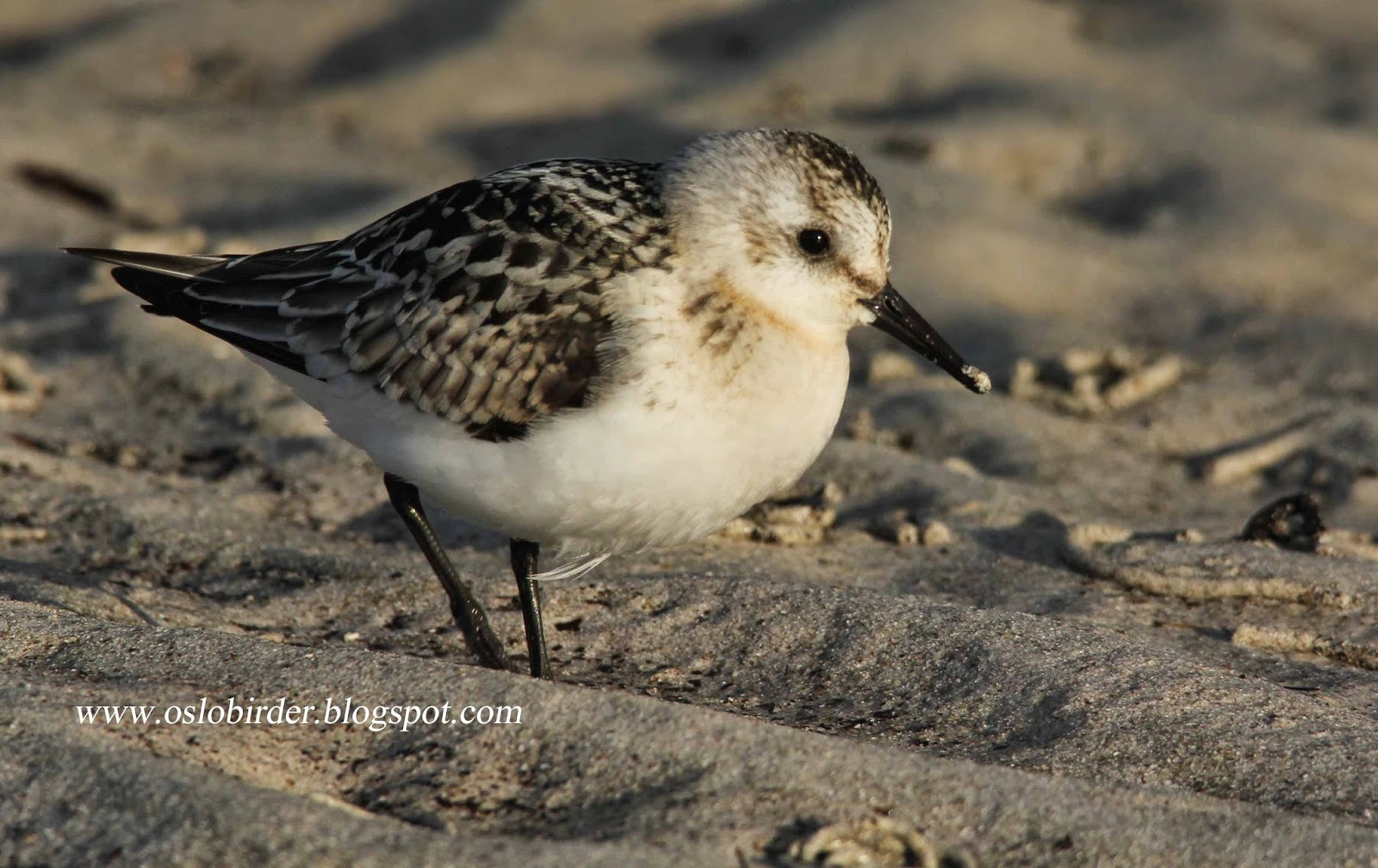 
The harbour in Værøy attracts thousands of gulls when there is fishing activity. The Russian import ban had caused a temporary stop in activity but alternative markets have been found and there was fishing activity when we were there. Despite being north of the Arctic Circle the only white wing gull was the Glaucous Gull (polarmåke) seen on just one occasion. On Wednesday Kjell and I had a huge congregation of gulls around a fishing boat but try as we could we found nothing other than Herring (gråmåke) and Great Black-backed Gulls (svartbak). Also despite the considerable time spent ringing gulls in southern Norway we could find only a single bird with a ring. 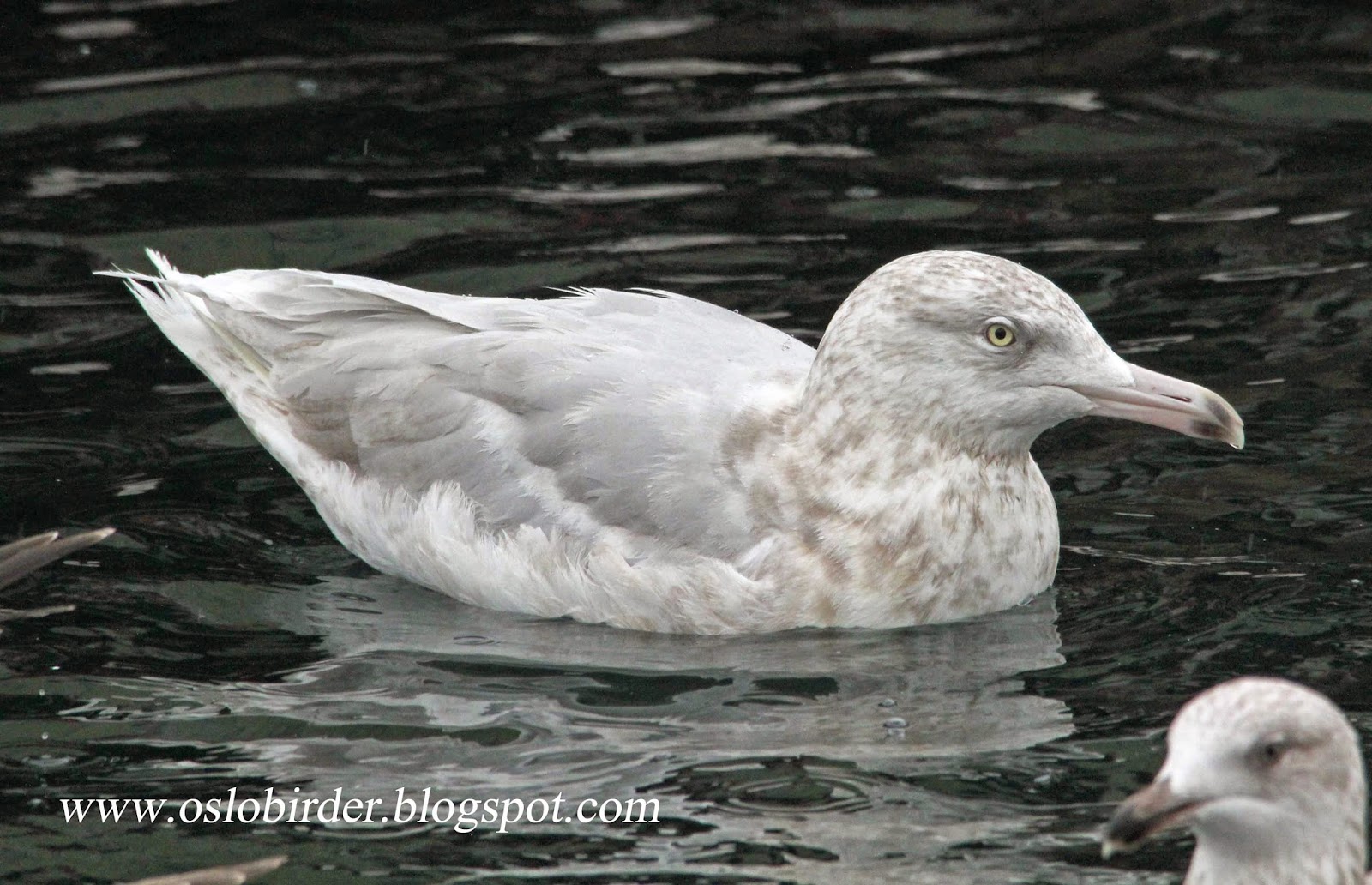 
Birding around Oslo right after the excitement of Værøy always feels like a bit of an anticlimax but today wasn’t too bad. I chose just a quick trip to Fornebu where there were quite a few thrushes feeding on berries and flying around and still some waders although warblers were represented by just a single Blackcap (munk). Three Slavonian Grebes (horndykker) in the bay at Koksa were quite a good local record and three Water Rails (vannrikse) squealing in the reedbed at Storøykilen were probably part of the family I saw in the summer.

At around 11am the wind suddenly picked up (as forecast) and as it was from the south I headed for Rolfstangen. Although the wind hadn’t been blowing long enough to have any real hope of anything having been blown into the inner Oslofjord it is this time of the year that big days have occurred in previous years (with Sabines Gulls, shearwaters and many skuas). As I walked out there were white tops to the waves, a wind surfer flew past and it felt good. However there was no movement to be seen and it was just the local Herring (gråmåke) and Black-headed Gulls (hettemåke) to be seen. After half an hour I picked up a Long-tailed Duck (havelle) in flight that flew around a couple of times before landing on the sea outside of Bygdøy on the other side of the fjord. Then after 40 minutes I picked up a dark gull off Bygdøy that quickly transformed itself into a juvenile skua. It is always exciting to pick up a skua especially here where a skua of any species is rare. It is not always easy to tell which species of skua you are watching but his one seemed a fairly straightforward Arctic Skua (tyvjo). It looked like it was trying to fly south into the wind but ended up landing on the sea and staying there until I left. It was at some distance meaning no real photo opportunity but it was easily in the Oslo part of the fjord (as opposed to Akershus where I was watching from) and therefore became an Oslo tick for me.

Further south there have been reports of shearwaters and Pomarine Skuas (polarjo) so if the wind continues into the night then it might be worth a trip to Rolfstangen again at dawn tomorrow.

Here is the first instalment of pictures from yesterday. I took so many pictures of the Jack Snipe that it has taken ages to go through them. It wasn’t easy to choose the best ones so I’m posting quite a few plus a video.


Here is the video I took- It should of course read less than 30 cm range: 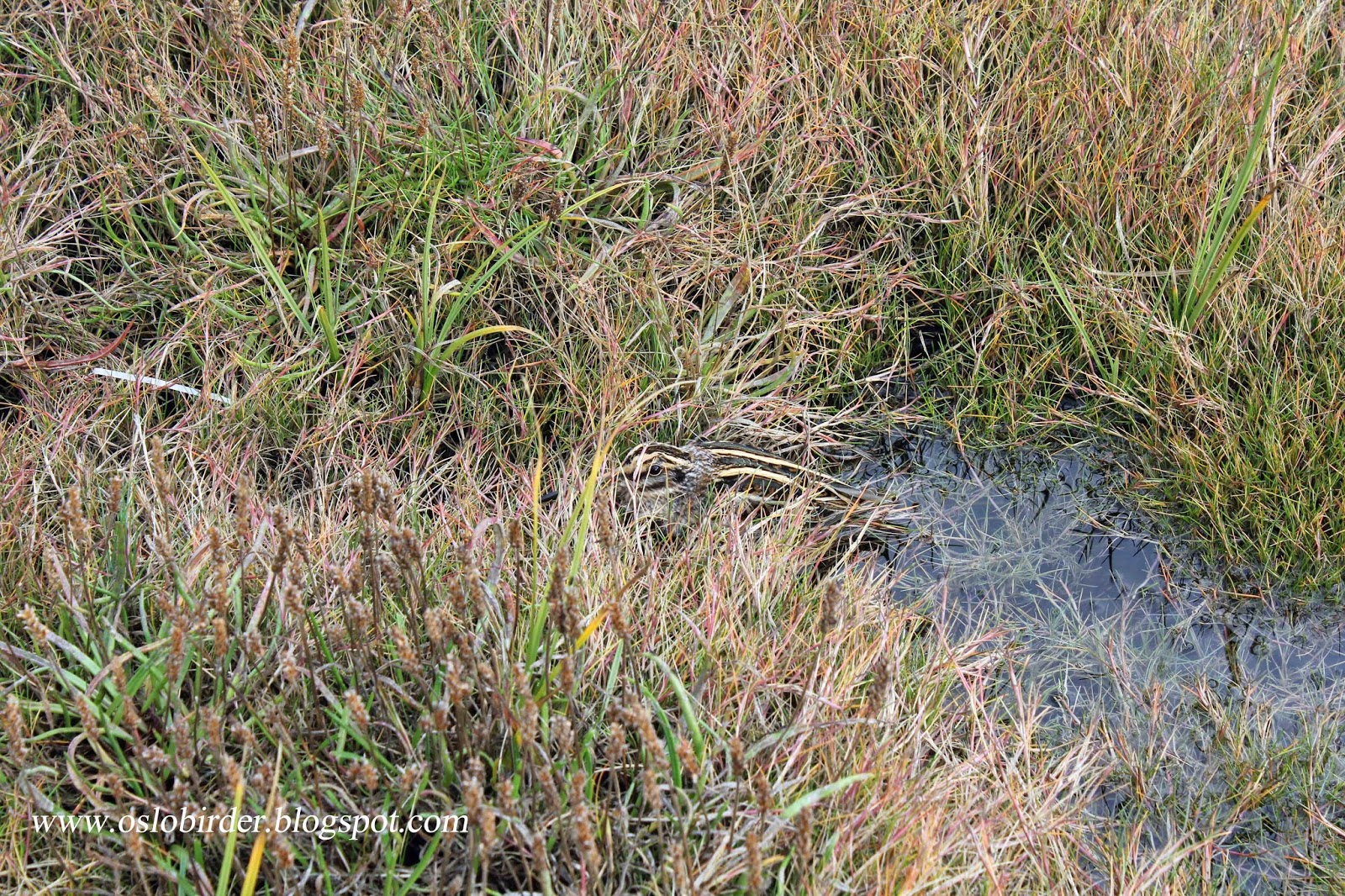 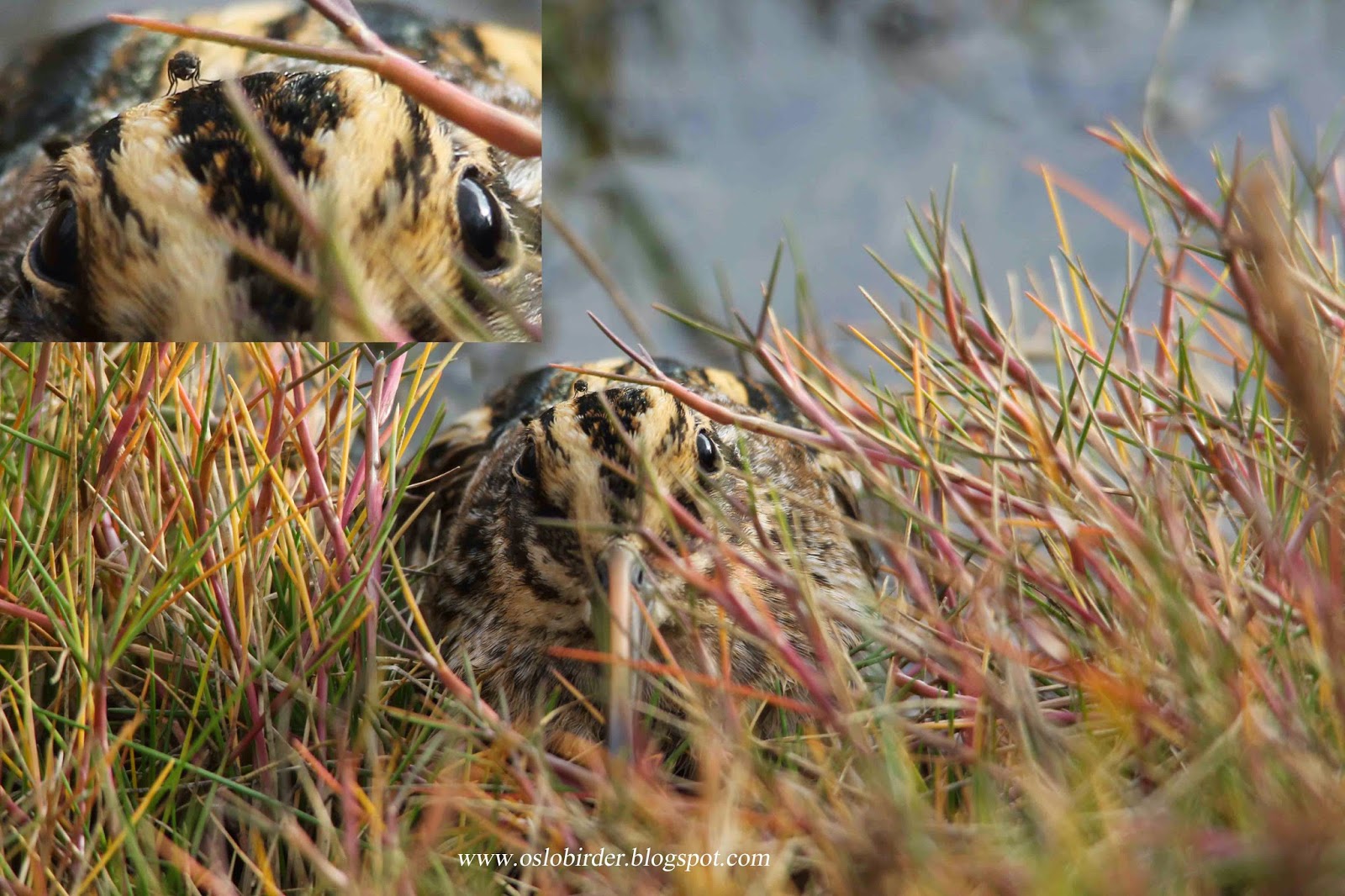 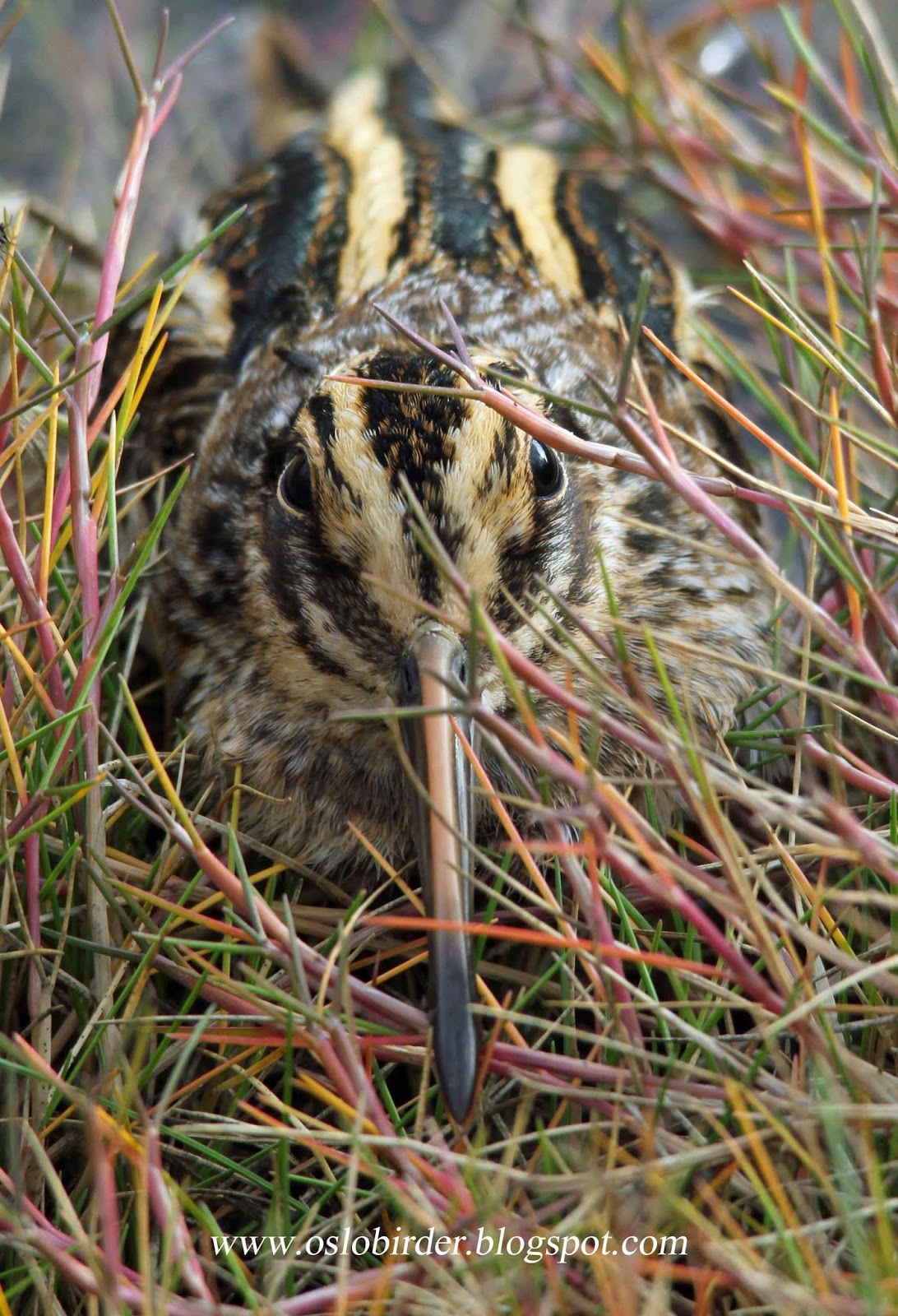 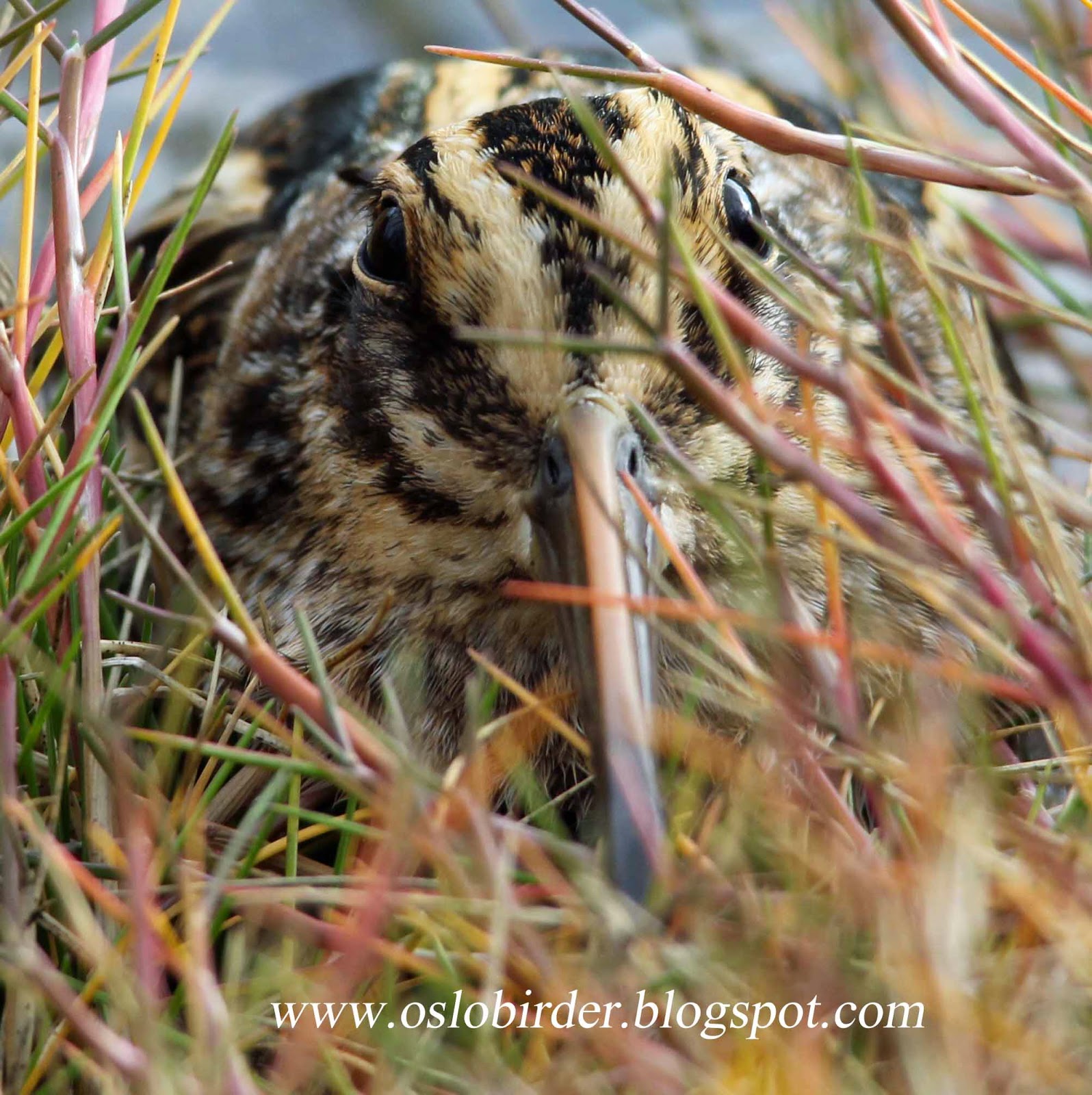 I received an MMS today with this picture of the bird I didn’t twitch yesterday – thanks Erling Lind! 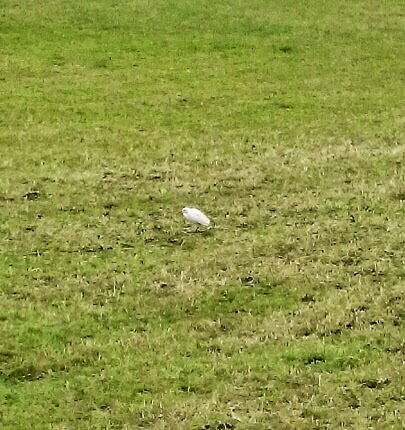 
Day 6 and my last day on Værøy was not the day I had hoped it would be. The weather felt perfect with easterly winds and clouds but a check of the weather maps shows the easterly wind to be just a local phenomenon and not part of a weather system originating much further east. There were definitely no new birds today although there ended up being some photo opportunities which I will post tomorrow.

Two messages on the Bird Alarm did get pulses up. First a  Cattle Egret (kuhegre) just north of Bodø by Skaug (an area I know well from annual summer visits to friends) had me briefly considering whether I could see it during my stopover in Bodø on the way home but I quickly dismissed that thought as that would be far too much like twitching ;-) The second message was of a Siberian Thrush (sibirtrost) ringed on Træna. Træna is one of three islands in Nordland county that attract birders in September (in addition to Værøy and Røst) and being quite a bit further south it seems to attract a more varied selection of birds than we manage to find on Værøy. This was an exceptional find though.

My birding started with the Rb Shrike (tornskate) and a Barred Warbler (hauksanger) still in the north and a short seawatch gave 4 Pomarine (polarjo) and three Arctic Skuas (tyvjo). In the south I searched quite diligently but a Lesser Whitethroat (møller) was the scarcest passerine with believe it or not NO Yellow-browed Warblers (gulbrynsanger) today. Searching for waders I scared up two Jack Snipe (kvartbekkasin) from under my feet before getting in the zone and starting to walk slowly and scan just a few metres ahead. This gave results as I suddenly saw a third Jack Snipe just 2 metres from me. It sat completely still and even allowed five other birders to come and see it (we were 10 on the island today). I switched to my 18-55mm lens and the mobile phone camera and was able to hold the camera less than 20cm from the bird. I could even see tiny flies walking over the bird!! Quite simply mind blowing.
Plan A for this species relies completely on its camouflage and it truly believes that it cannot be seen if it just crouches down and doesn't move. In the end I decided to test out quite how trusting it was and only at less than 10cm range did it tense its body and get ready to execute plan B - fly baby fly and at 5cm it flew off in a whir.

The others who have 4 more days have an uncertain time ahead with a change in the weather forecast which must be good considering how quiet it currently is but very strong SSW winds and rain are not necessarily much better......
Lagt inn av rixy kl. 21:30 No comments:

Email ThisBlogThis!Share to TwitterShare to FacebookShare to Pinterest
Etiketter: Værøy


The expectations for today were so much that I was up before my alarm went off (thus also and refreshingly ensuring number one spot in the number two queue) and in the field at first light. The anticipated deluge of birds had clearly not happened though and two hours in Nordland revealed there was nothing new in except for a constantly calling Goldcrest (fuglekonge) and a Dunnock (jernspurv) flying high over and calling. Just as we were about to leave for the south of the island though Kjell found a Red-backed Shrike (tornskate) and suddenly if felt like game on. Aren't we fools?!

Eight hours of slogging it around the island gave me only a sore back although I did bag five new species for the trip: Shelduck (gravand), Bullfinch (dompap), Jack Snipe (kvartbekkasin), Greenfinch (grønnfink) and Wood Pigeon (ringdue) plus a new subspecies with a very vocal although poorly seen presumed tristis (Siberian) Chiffchaff. The later helped keep the motivation levels up but the day really didn't deliver as hoped and I now only have tomorrow until 4pm to find something really good.

A Starling (stær) I came across was an amazing mimic. He was part of a group of 30 birds and was one of only two that were singing. He mimicked Whimbrel (småspove), Oystercatcher (tjeld), Herring Gull (gråmåke), Wren (gjerdesmett) and Redwing (rødvingetrost). His mimicking of Whimbrel has me seriously doubting the bird I have recorded the last couple of days on call only! 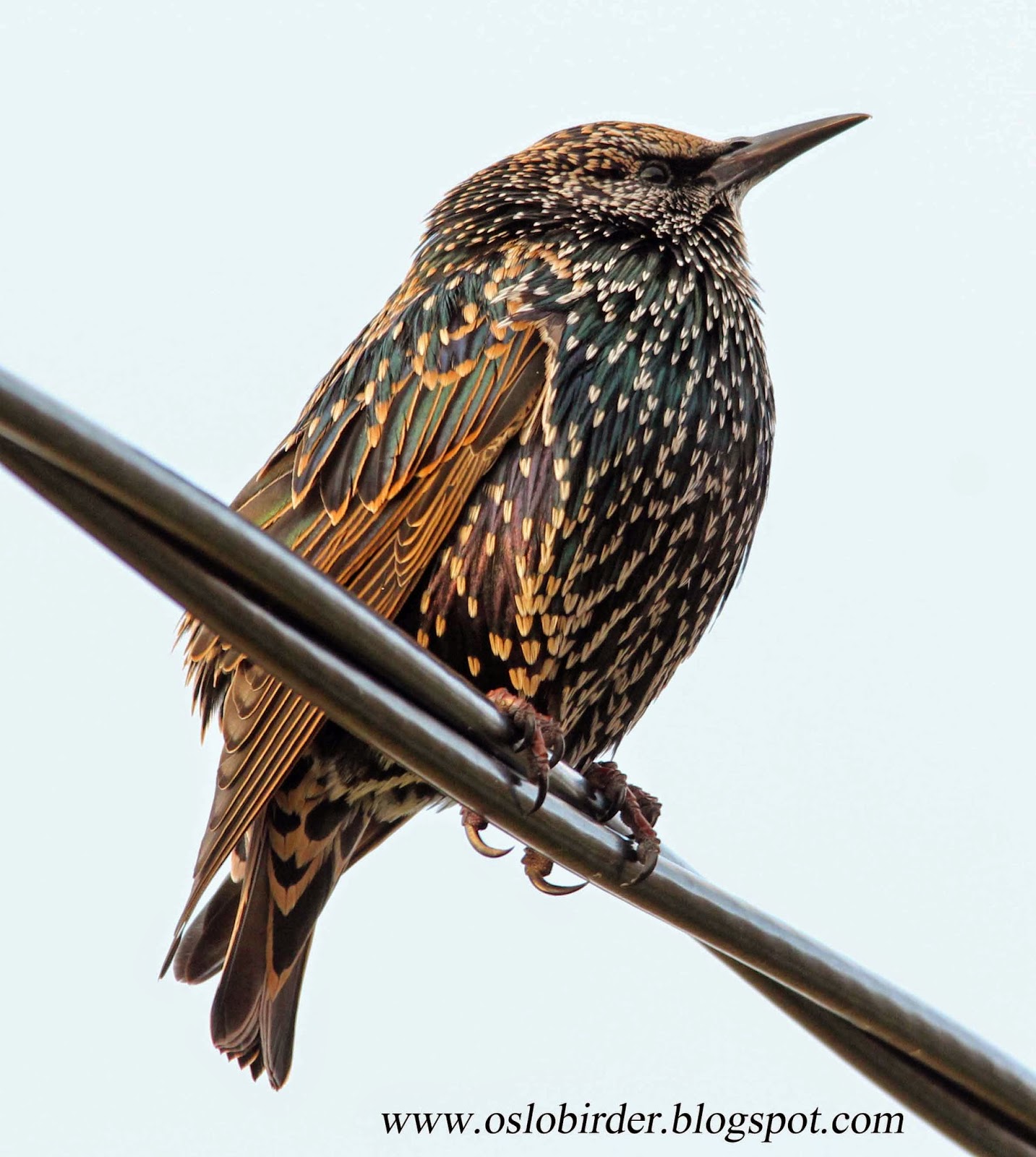 Video of Starlings. You can here it mimicking Whimbrel, Oystercatcher, Redwing and Wren and probably some others. 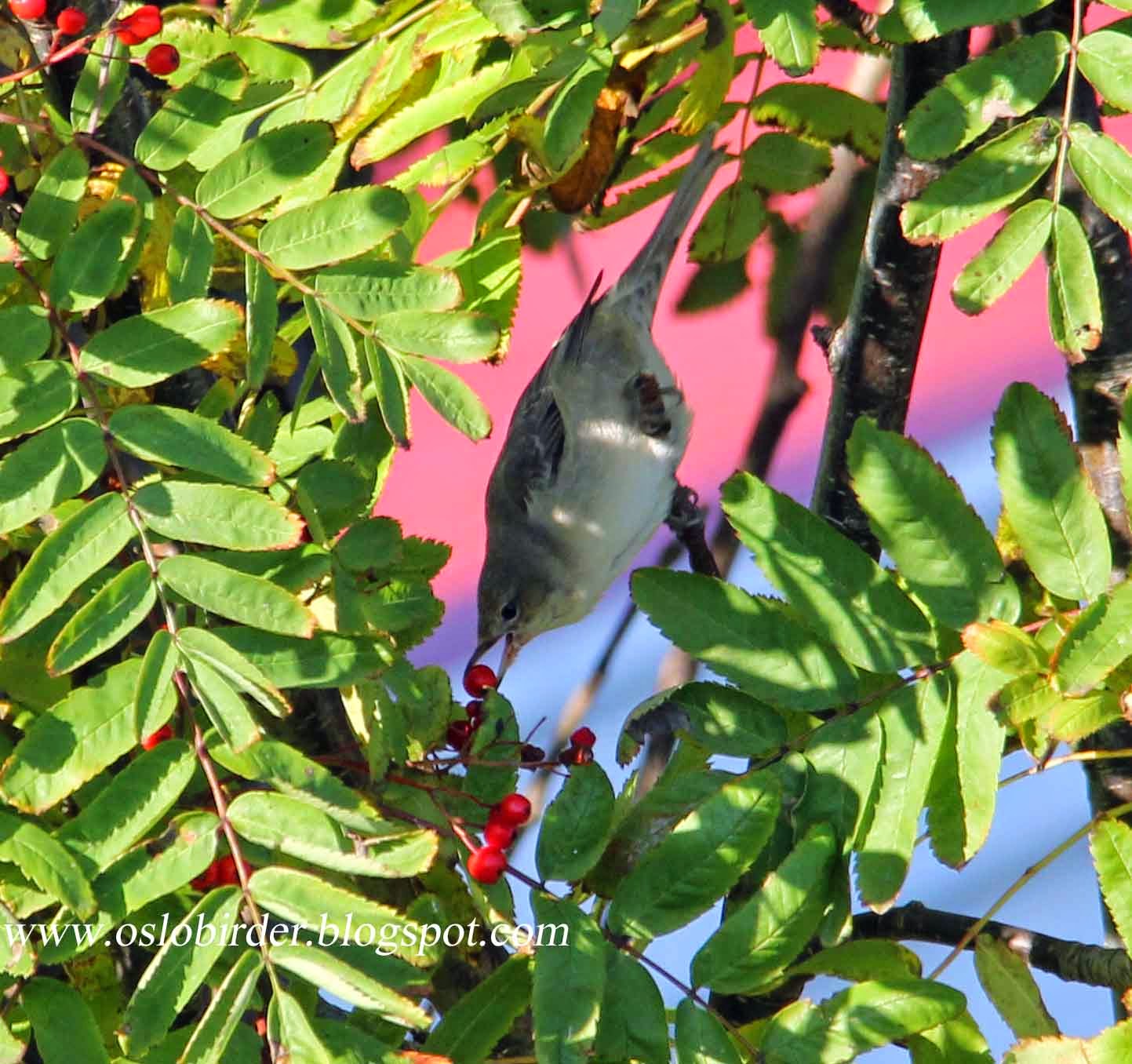 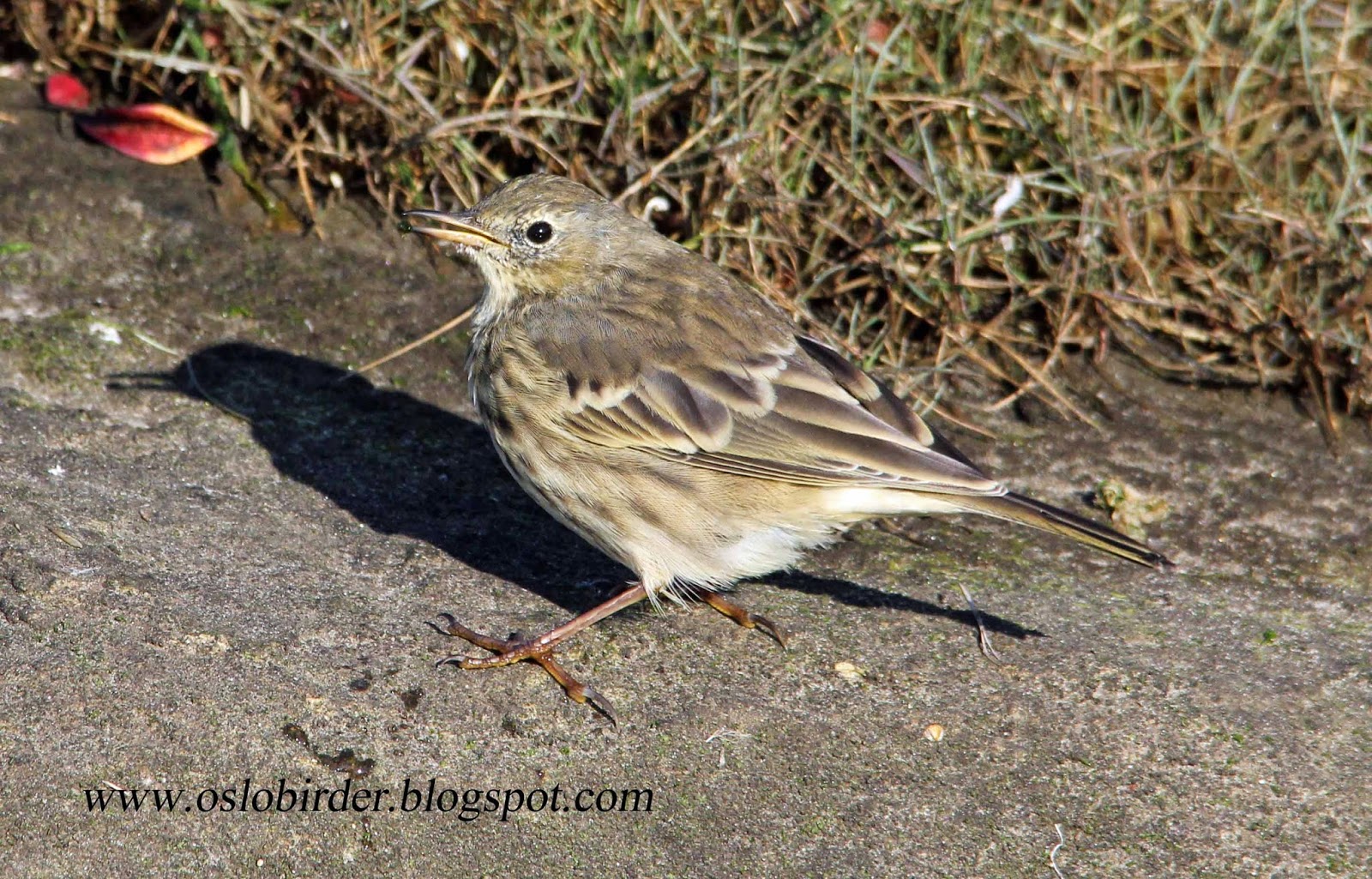 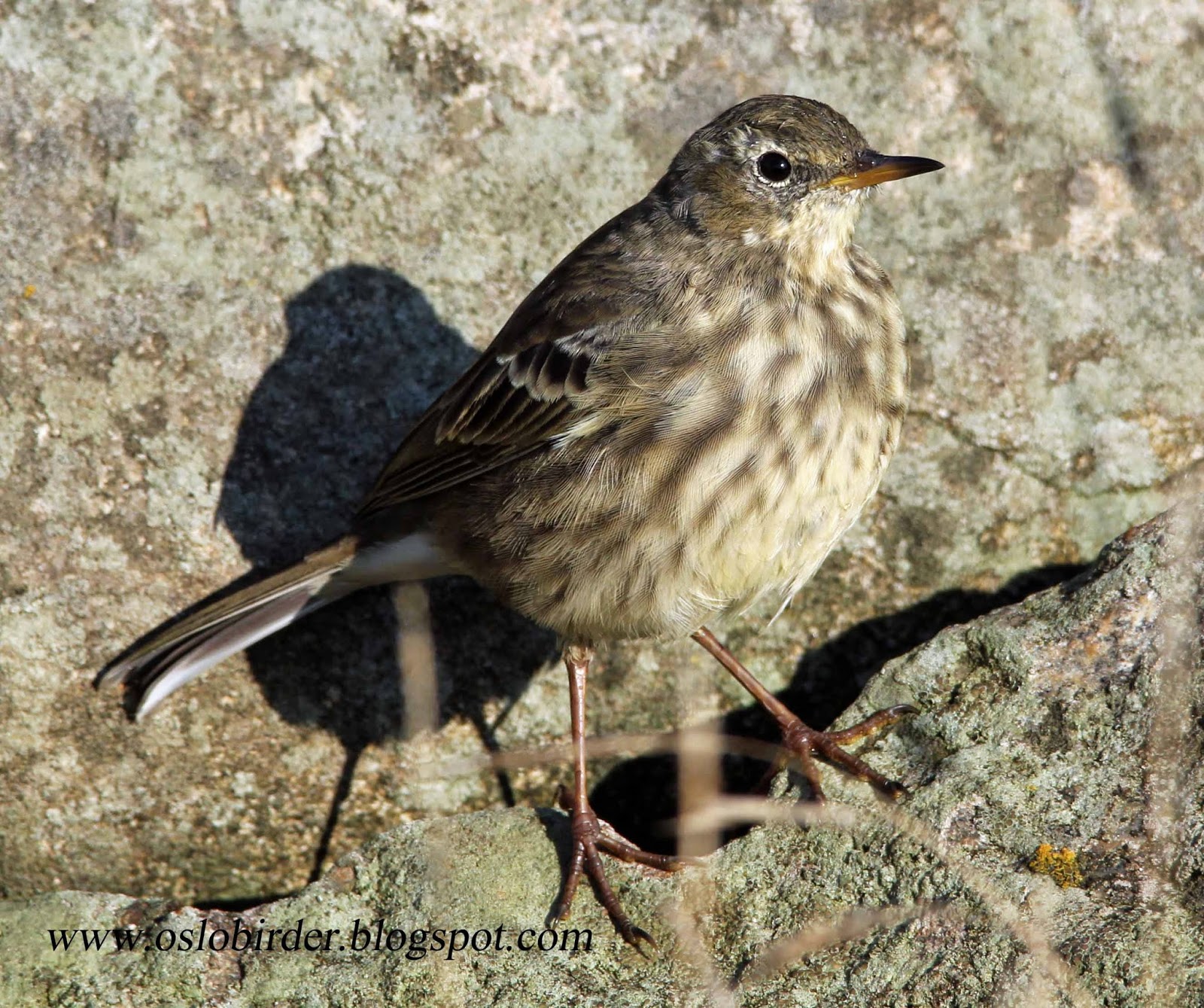 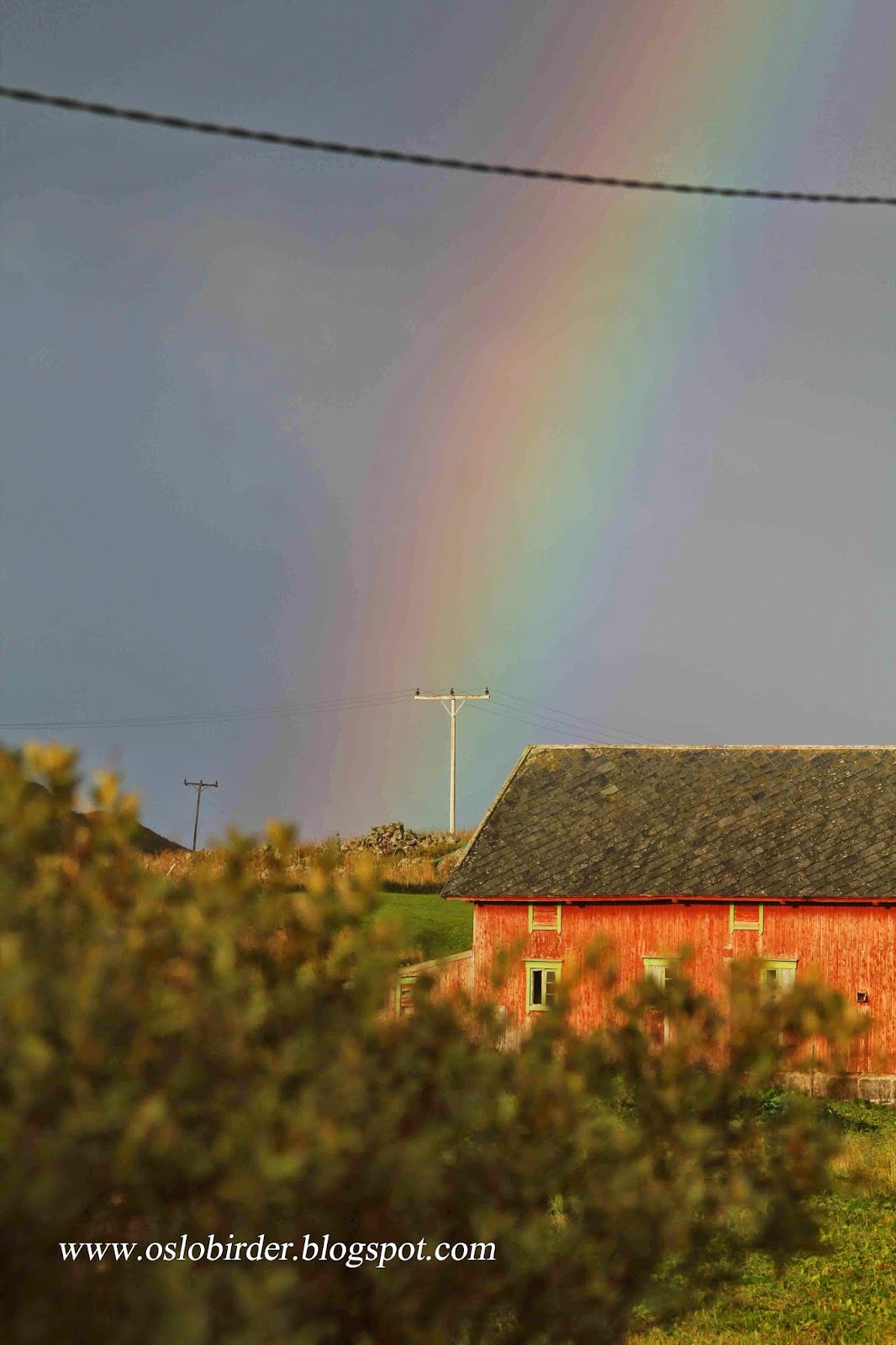