This post doesn’t present much in the way of new photos but I have had a chance to go through my Nightjar photos on the computer and think I have made a slightly better job of editing them. That said it is possible to do an awful lot on a mobile phone. Also a video put together from footage taken with the bazooka - you can just about make out the bill moving when it churs.

We noted two different males (sexed due to white in wing tips and tail) flying together and a female so the area seems to be good for Nightjars and will hopefully allow new encounters.

Being at home means that the first stage of our 2021 summer holiday is over. Stage 2 will be a week in Beitostølen and stage 3 is still TBD. 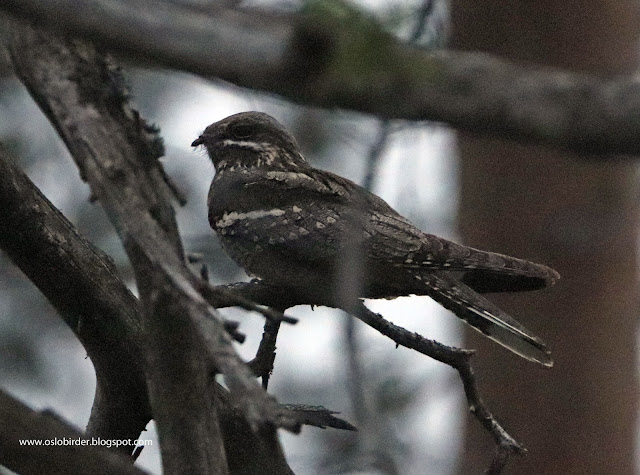 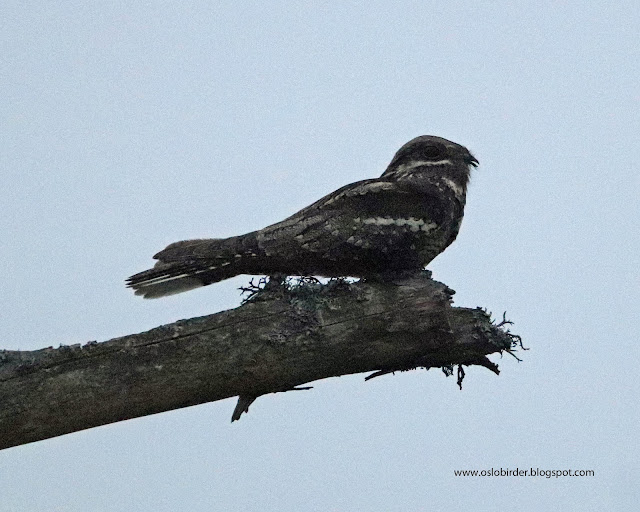 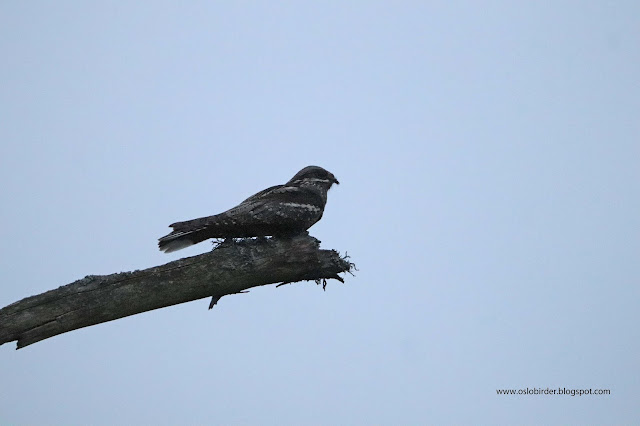 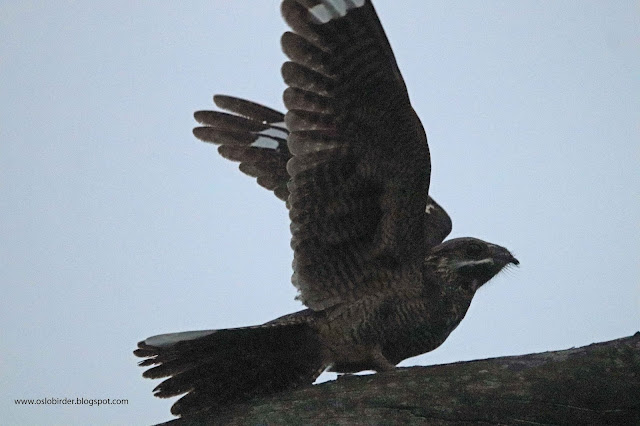 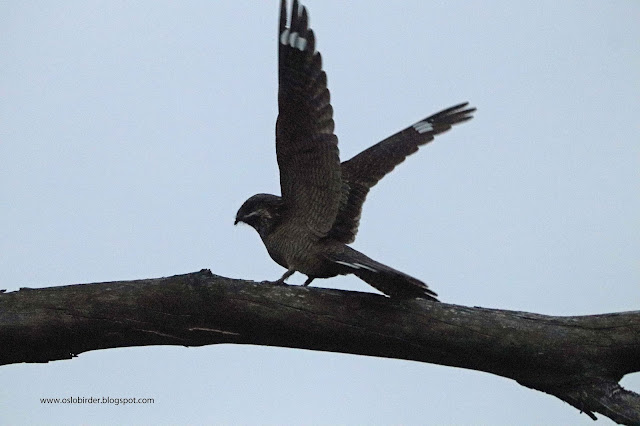 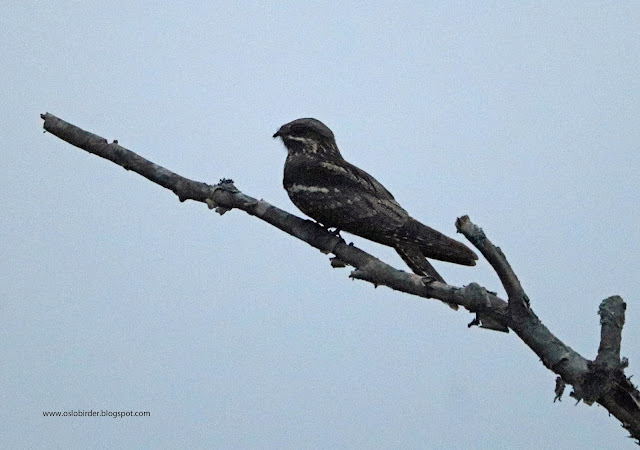 I have had quite a few posts about the butterflies around the cabin at Hulvik including this one from last year which summarises the species I have seen. Prior to this year I had recorded 34 species and our visit at the end of May had already added a new one with Green-underside Blue (kløverblåvinge). I had more observations of that species this last week including an egg laying female but no other new species. My total of 16 species was not very impressive and the complete absence of any of the larger fritillaries was worrying.

In addition to these butterflies I also noted the odd moth (god forgive), grasshopper, wasp and odonata. It was in fact a moth which was the real invertebrate highlight - a broad-bordered bee hawk-moth (bredkantet humlesvermer) allowed itself to be admired and photographed at close range. I saw what was most likely this species last year but it didn’t hang around long enough for me to confirm so I was very happy that this one allowed me to go and get my camera (I was swimming at the time).

Another very interesting moment was provided by a red-banded sand wasp carrying a caterpillar over the patio of the cabin. I wish I had followed it as it was only afterwards that I read up and realised that the caterpillar was going to be taken to a hole where the wasp would lay an egg inside it and the caterpillar would provide food for its offspring. 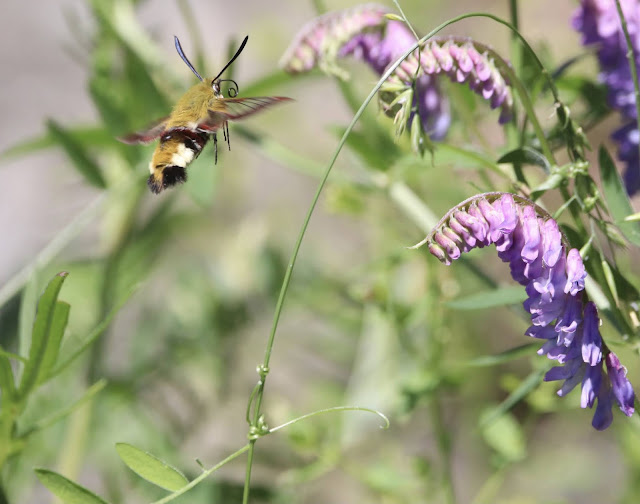 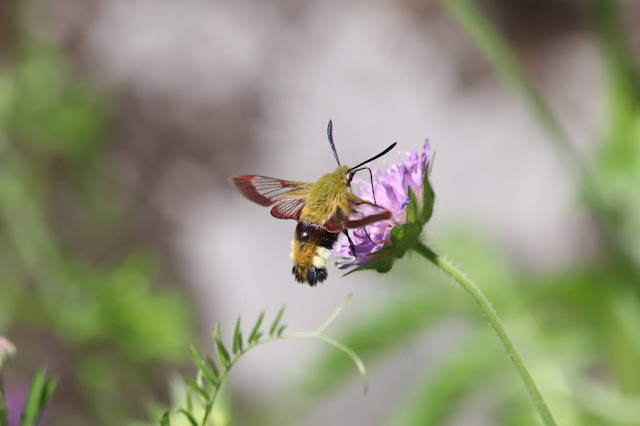 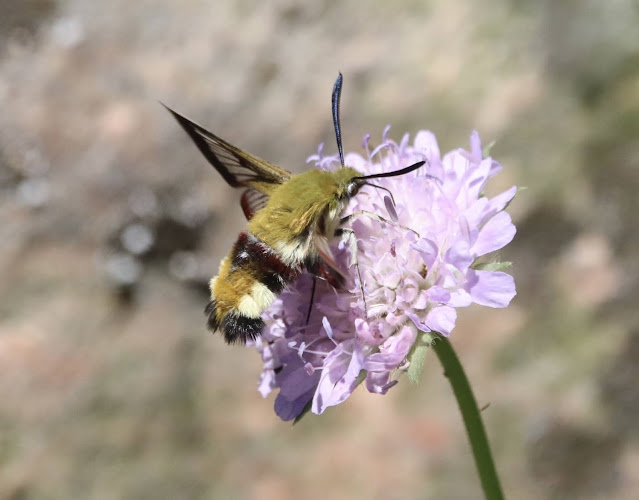 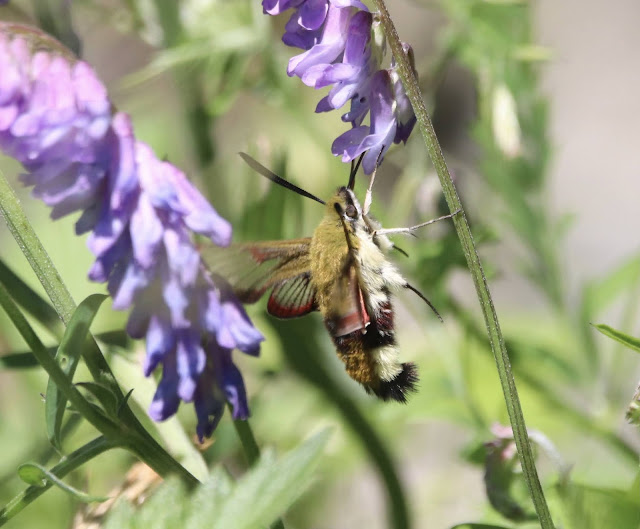 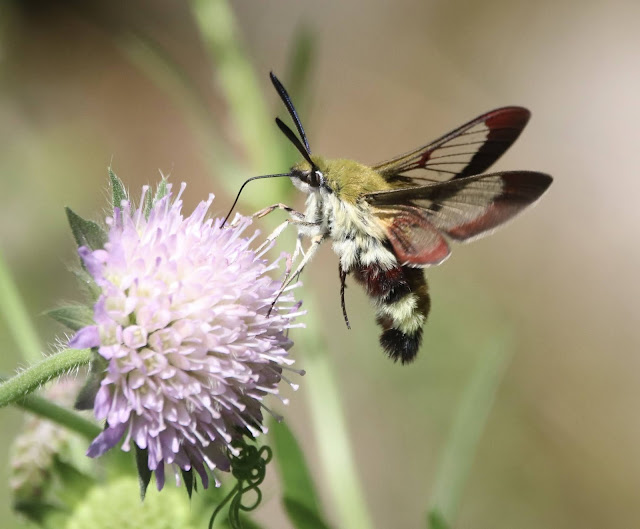 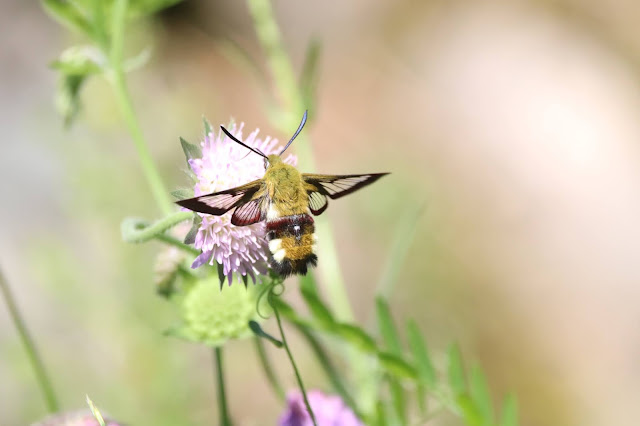 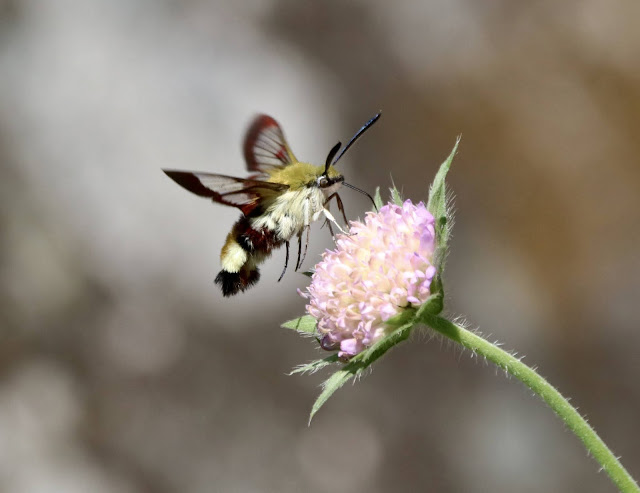 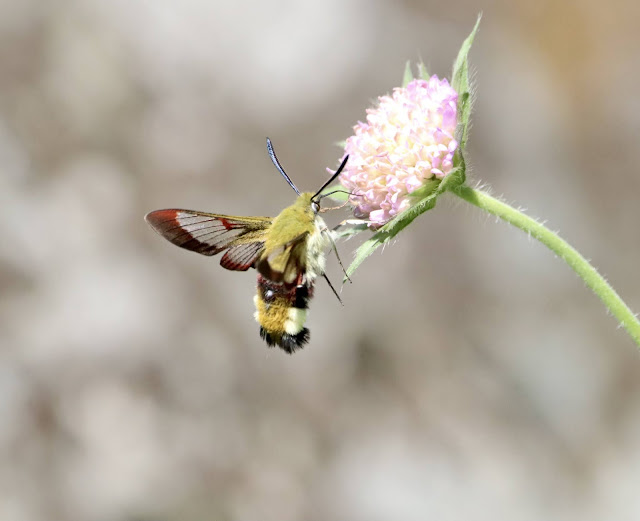 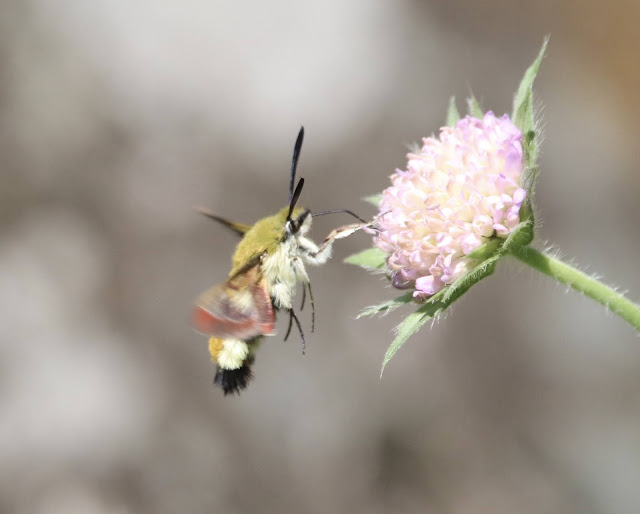 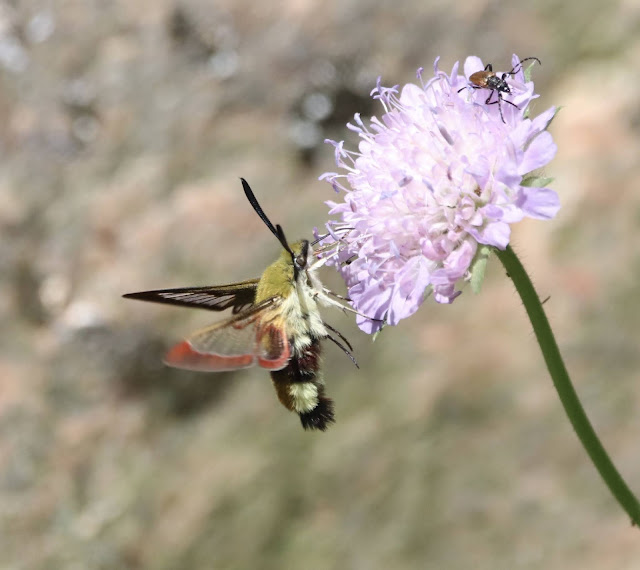 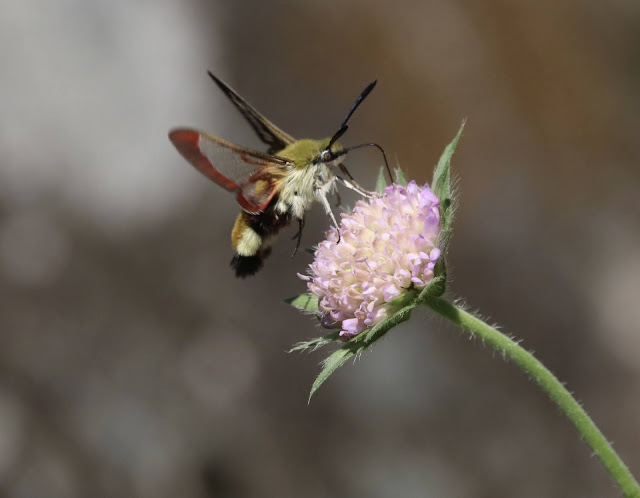 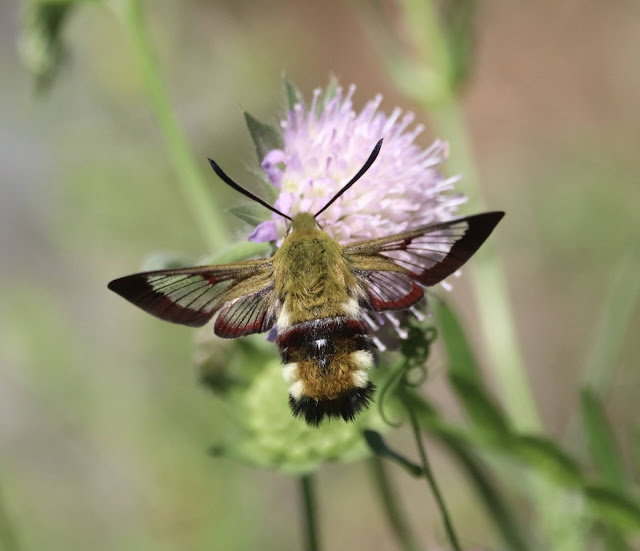 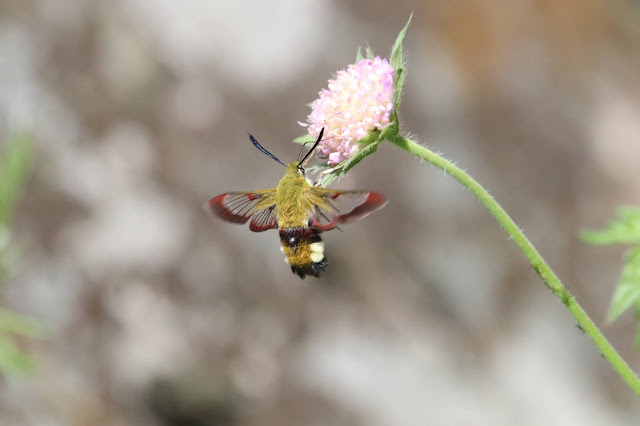 Our week by the sea is coming to an end and before I bore (many of) you with pictures of butterflies here is a final non invertebrate update.

Jr and I had another nocturnal trip but I have to accept that her interest is more in the mammals that we spot than the birds. We added badger and hare to our list so we were definitely doing better on the mammal than bird front. We did see the Nightjars from the car again and this time had a male and female flying together. It is rather cool to be able to stop the car, wind down the windows and have this mystical nocturnal creature right outside.

The Lesser Spotted Woodpeckers left the nest over the course of a couple of days amd the young have been noisily begging for food and following the parents around in the forest. The first White Wagtail young are out of the nest and interestingly I have seen three different males feeding just a single youngster each.

I discovered another Red-backed Shrike territory but just two is a bad showing in this area.

A Smooth Snake (slettsnok) by the cabin was a cool find and allowed a close picture with my phone but when I returned with the bazooka it shot off.

The 5 young Spotted Flycatchers in the nest in cabin gutter are now looking more their parents who are having no problems bringing a steady supply of food.