The summer holidays have started and with it nice, hot, sunny weather more suited for butterflies than birds. We are spending the first week of the holiday as we usually do by the coast south of Oslo. In my post from this time last year I commented on how there were fewer butterflies than the previous year and that trend has continued. Butterfly biomass is quite low (especially compared to last year when there was a Painted Lady invasion) but variety is better this year.
One species is doing well though and that is Pearly Heath (perleringvinge) - I only recorded this species for the first time in 2018 and it is now one of the commonest species in the area.
I have recorded 22 species so far compared to 20 in 2019 and 25 in 2018 of which Amanda’s Blue (sølvblåvinge) is a lifer, Cranberry Fritillary (myrperlemorvinge) is new for me here plus Wall Brown which I did not see here in 2018/19 but have recorded here earlier.

Here is my butterfly list from the last three years for the area around the cabin with species not seen this year crossed out:

I’ve checked out a couple of ponds for odenata and had my first ever Variable Damselfy (fagerblåvannymfe). With damselflies, blue butterflies and fritillaries I keep having to remind myself how important it is to look at every individual in an area as it is extremely foolish to assume that they are all the same species as the first one you identified.

Birding wise I have had a pair of Wrynecks collecting food after seeing none last year although had birds at two localities in 2018. Red-backed Shrike at 3 sites is 1 better than last year but way down on 7-9 in 2018. One species doing well here though is Lesser Spotted Woodpecker which I have not recorded before but this year I found a nesting pair with noisy young about to fledge and another pair who seemed to be collecting food for young.

I have spent a bit more time than usual looking over the sea and was rewarded with a rare mid summer Arctic Skua chasing gulls. Large numbers of large gulls breed on the islands here so it wouldn’t be impossible for skuas to also breed.

I haven’t found the motivation for a nocturnal trip.

Since Tuesday’s avian excitement I have been more interested in dragons and butter.

The exceptionally hot temperatures continue with nighttime minimum around 20C and is getting up close to 30C in the day. Butterflies which I still think there are generally few of have been in constant movement which is I assume a sign that energy levels are high and that all that is important now is to find a mate. This makes identifying them difficult especially blues where more than one species can fly together.

Dragonflies have been far more cooperative though. The male Broad-bodied Chaser (blåbredlibelle) is still by his puddle but I have seen no female there. Common Blue Damseflies (innsjøvanymfe) are now on the wing and there good numbers of Golden-ringed Dragonflies (kongelibelle). On Thursday I wanted to find tangelvelibelle (Onychogomphus forcipatus, the small pincertail or green-eyed hook-tailed dragonfly). This species is know from only one site in Oslo which is in Maridalen. I have seen the species once before in the mouth of a Yellowhammer but have really wanted to see it properly as it is quite a special species. I had the Beast with me on Thursday and we sat at various points along the river hoping to see one but failed in that quest although there were lots of other dragons and damsels to see. I asked for advice on how to see it and was told that it was still early in the season and that my best bet might be to search for emerging individuals. Yesterday I went with my canine friend and sat myself down once again in a likely spot. I noticed a Fieldfare on the bank on the other side with a mouth full of food and saw that it had a newly emerged dragon in its beak which looked very much to be my target. Going round to the other side I almost immediately chanced upon a dragonfly emerging from its larve form on a stone. The separated eyes told me it was my target and I then sat down to enjoy the spectacle. When I found it it was still in the process of emerging but this went quickly. I then watched it drying out and getting bigger before over the course of an hour its colours developed and it then flew off (after having made an initial hop up from the stone to a neighbouring bush). In the same area I found two adult males but I only found the when they flew up in front of me and they were not patrolling like the other species I encountered.

At the Three-toed Pecker nest the young are now coming up to the hole to be fed but are not yet sticking their heads out. 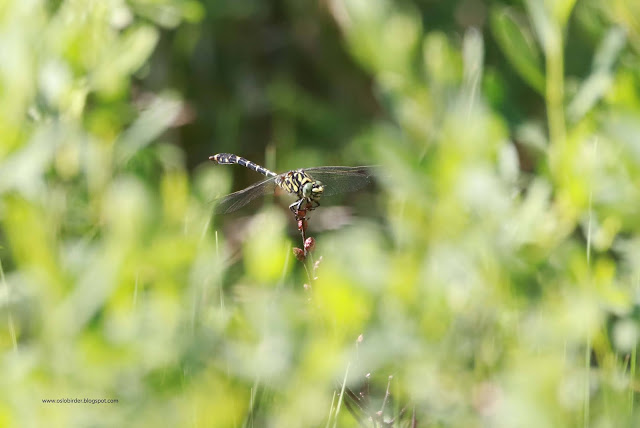 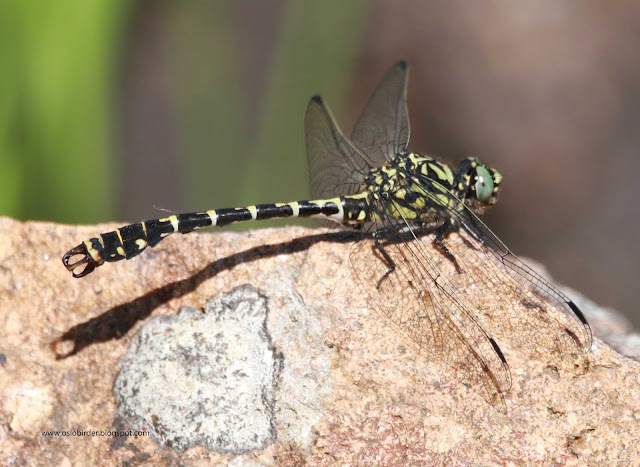 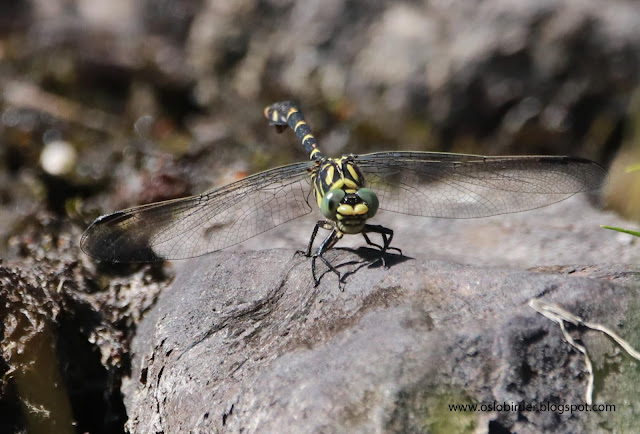 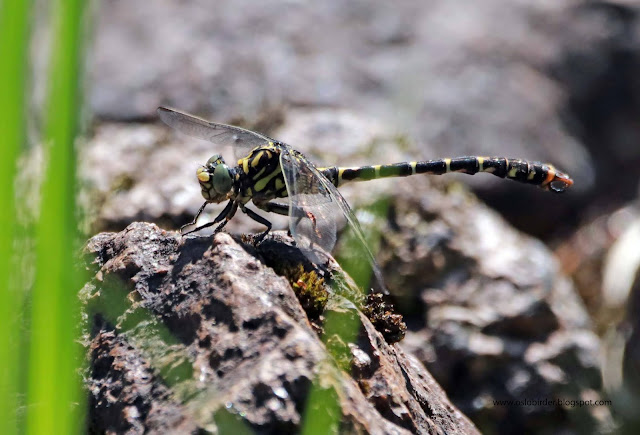 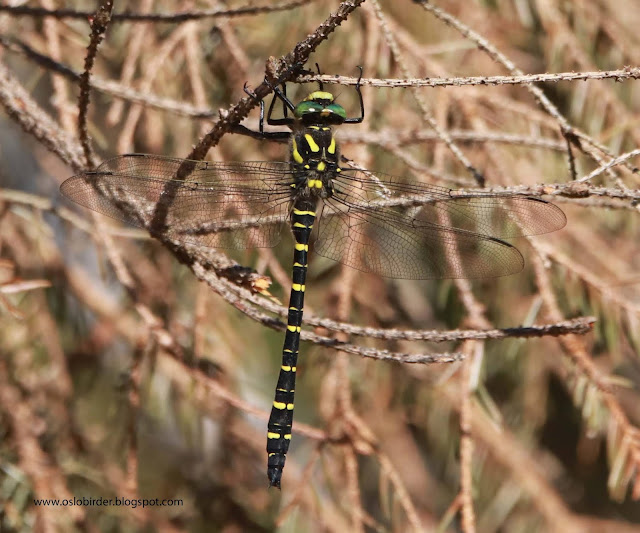 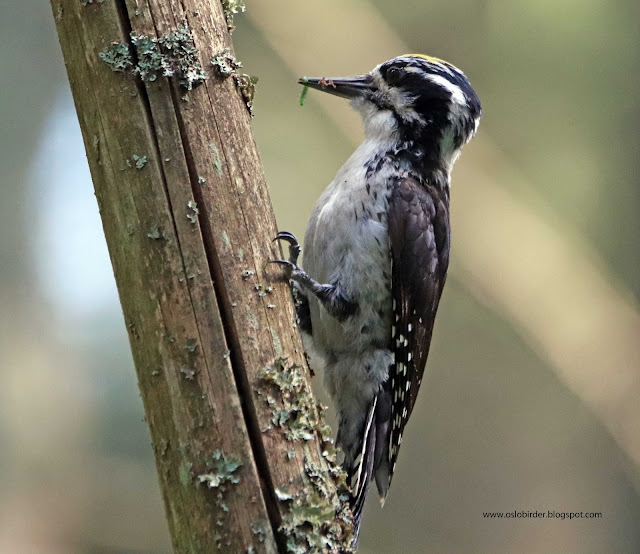