The mountains report part I

I am back from three fantastic but very intense days in the mountains around Valdres and Beitostølen. I visit this area every year either with the family or guiding and it is one of my favourite areas in Norway, one I know well and an area where many exciting species can be seen. A visit at the end of May or beginning of June when there is still lots of snow and ice and lots of birds impatient to start breeding offers many opportunities for close views of birds as they congregate in the few snow/ice free areas.

This trip was with Conor C staying at his cabin and enjoying his hospitality whilst I provided the guiding and birding knowledge. It was a good combo 😊

The weather was perfect with it suddenly being very warm, sunny and little wind after a period of bad weather. Birds were keen to get on with breeding and there was lots of song and display.

Up on Valdresflye there were lots of Lemmings and they were both running over the snow and along the side of the road. As we drove along with the windows down we could here them calling! I have never seen so many Lemmings up here and one would expect large numbers of raptors and owls but that was now the case at all and in fact I have never seen so few raptors up there as I saw on this trip which is a hard one to explain.

A pair of Long-tailed Skuas showed exceptionally well and they are the Lemming eating specialist one most hopes to see so the lack of raptors wasn’t dwelled upon too much although it would have been nice to see Short-eared Owls.

Great Snips showed at my lek with 4 males displaying and a fifth bird that was probably a female. They were already in action in sunlight at 9pm when we arrived (a bit later than planned) but the level of activity was lower than at the same time last year. I also discovered a new Great Snipe lek which was in a large field and a much different type of lek. Here we had 4 birds displaying but they were rather spread out over the field and activity here was also not great. So, I have now discovered two Great Snipe leks and most likely a third (displaying birds in the daytime but I never visited in the evening to confirm) which I don’t think many birds can say.

Rock and Willow Ptarmigan both showed very well with and surprisingly we had Willow higher up on Valdresflye than Rock. Dotterel and Shore Lark only showed at long range in the scope which was a bit of a disappointment but Lapland Bunting and Temminck’s Stint showed very well.

Bluethroats were every where and gave photo opportunities that were almost unrivalled.

I upload over 2200 photos and video onto my hard drive and after a number of hours I am down to “only” 700 so it will take a while to go through everything and the photos will have to come in a few instalments. I will start with some landscape shots taken on my phone and showcase some excellent in habitat flight shots of the Long-tailed Skuas that Conor took. 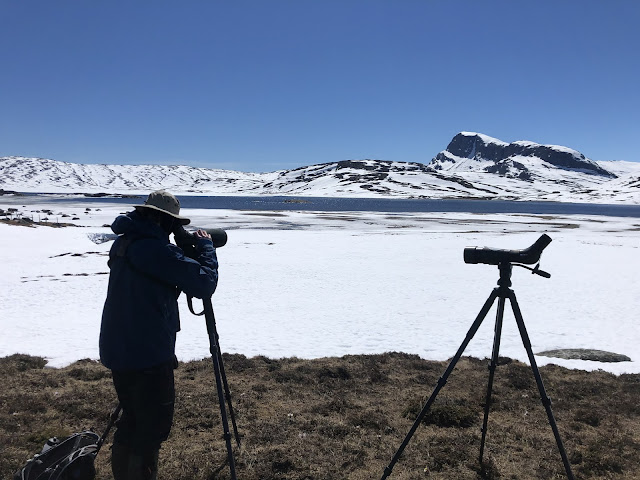 Just a few pictures to give a taste from the mountains. There is still LOTS of snow and frozen lakes but there are of course birds 😊 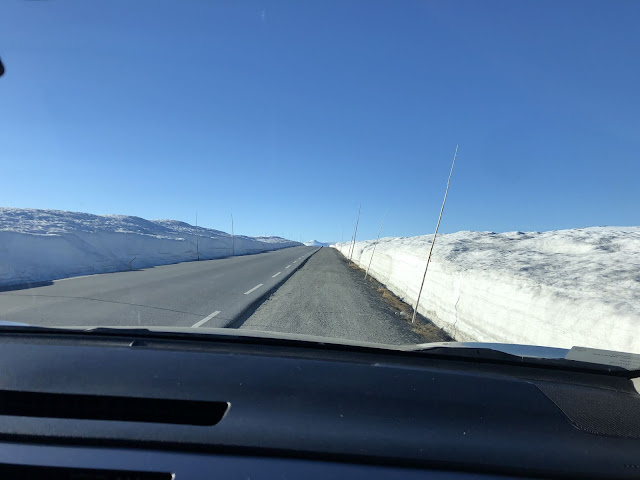 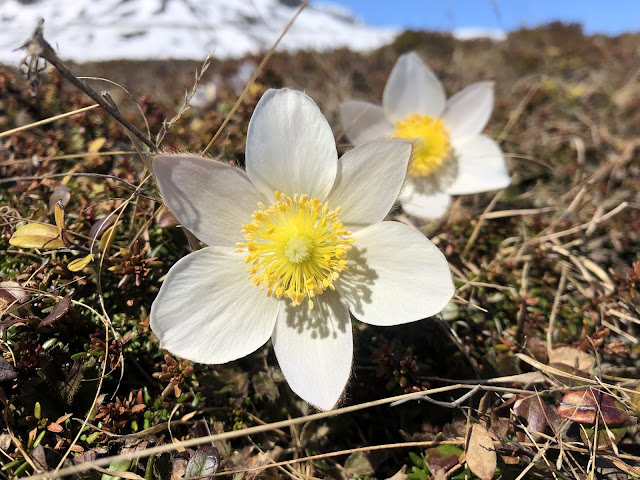 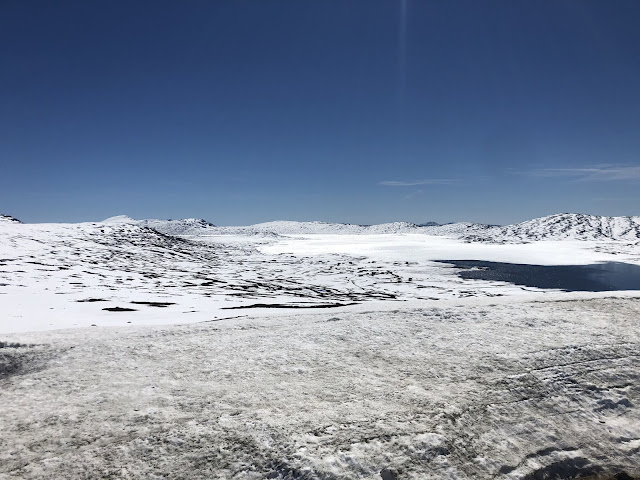 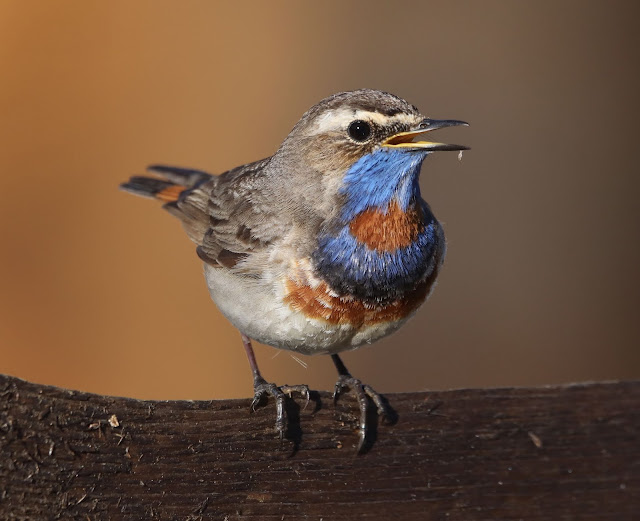 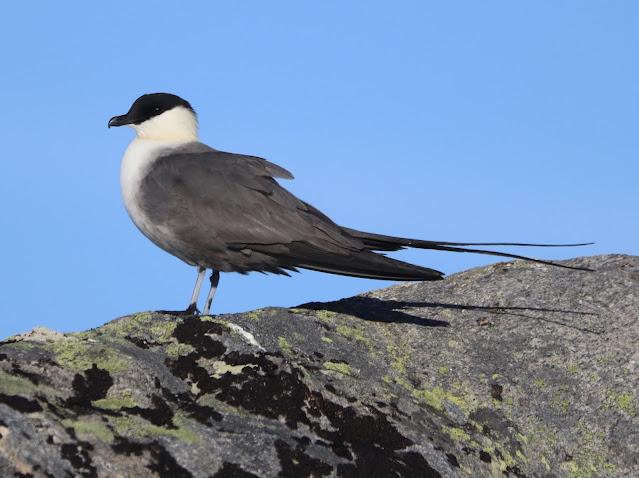 Before I head to the mountains I had two guiding assignments yesterday (and had to say no to a third!).

In the morning I was guiding for various goodies around Oslo and we had an incredible day!! Long-eared Owl, Tawny Owl, Temminck’s Stint, Kingfisher, Garganey, Hazel Grouse, Parrot Crossbill, Black-throated Diver, Osprey and Pintail were among a long list of birds seen and most of them seen very well.

Bird of the day though was something much commoner - a male Common Eider on Maridalsvannet. When Jack said there’s an Eider as we drove by the lake I wondered, to be honest, what he had actually seen....and was mildly surprised when I saw there was indeed a male Eider swimming right by the road😊. Freshwater Eiders are rare although this is the third record for the lake. What made this bird so special was that it was swimming around the edge of the lake, associating with Greylag Geese, Mallards and Whooper Swans and feeding by dabbling in the shallow water and vegetation. I strongly suspect the explanation for this is that as a baby he was adopted by a Greylag Goose family on the fjord and has grown up with an identity crisis. At the moment there is a young Eider that is feeding with on short grass together with a family of Barnacne Geese at Bygdøy so this happens every now and again. It will be interesting to see how long it stays as I suspect the Greylag Geese are here to moult now.

My second guiding in the evening was focused on seeing the Tawny Owl and was also a success😊🦉. 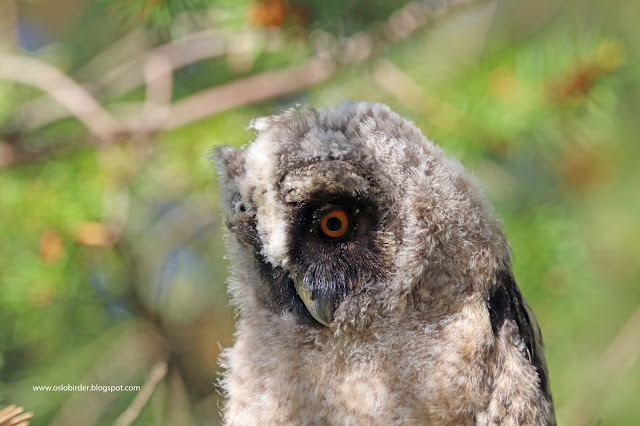 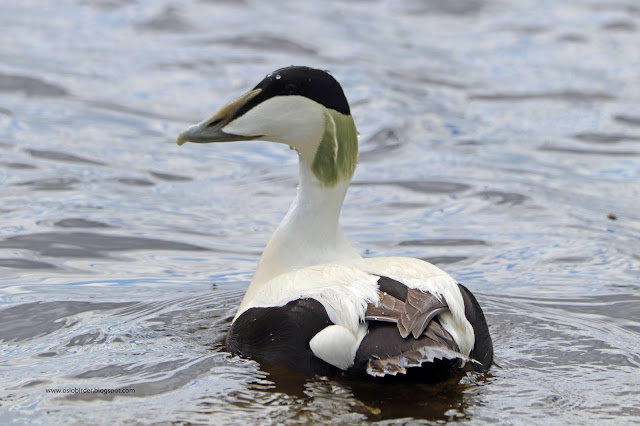 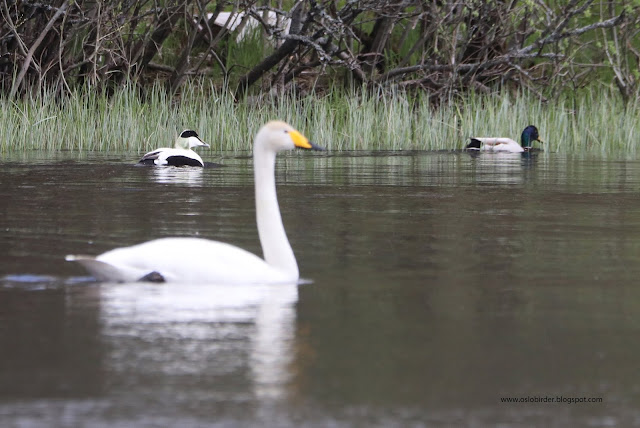 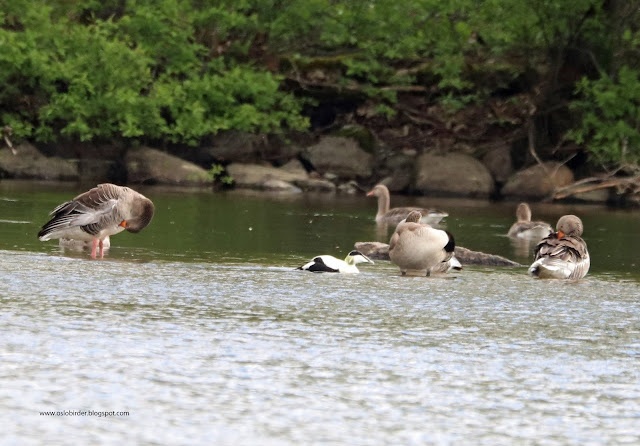 Checking in on the Dale

After the excitement of the cabin I am back in Oslo and Maridalen for a few days before heading off to the mountains on Friday for three days of birding and guiding which I am really excited about. The weather forecast looks perfect for some very nice encounters with lekking Great Snipe and many other mountain birds.

It was windy and overcast in Maridalen yesterday and today is raining and nearly blowing a gale so that just makes the promise of the weekend even greater.

Yesterday there were a lot of warblers singing in Maridalen and right now is the perfect time for finding and seeing them before the foliage becomes too dense. I had good views of Garden Warbler, Blackcap, Icterine Warbler and Willow Warbler and in addition heard Chiffchaff, Whitethroat and Lesser Whitethroat. I always struggle to tell the song of Garden Warbler and Blackcap apart and it was interesting to see a Garden Warbler chasing a Blackcap almost as though he couldn’t hear the difference either.

I saw my first Red-backed Shrike for the year in the Dale and most of the summer migrants are back now and the only common species I have yet to see are Marsh Warbler and Rosefinch.

I checked out one of the Tawny Owl boxes and an adult immediately called as I neared the box. She (I assume it was the female) was definitely protecting her young and her calls were both to warn them of my presence and also to warn me off. I didn’t stay long but saw no young out of the box but could hear them inside so I assume that they will jump out anytime soon which explains why the adult was so stressed (she has not made her presence known on previous checks of the box). 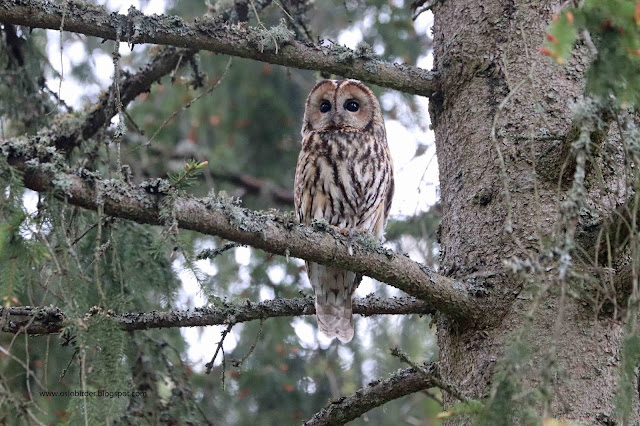 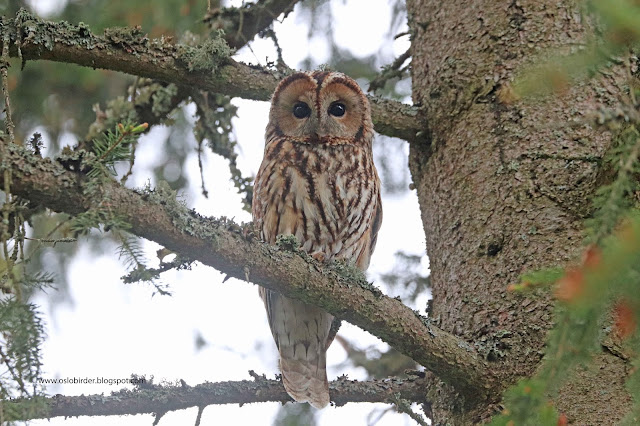 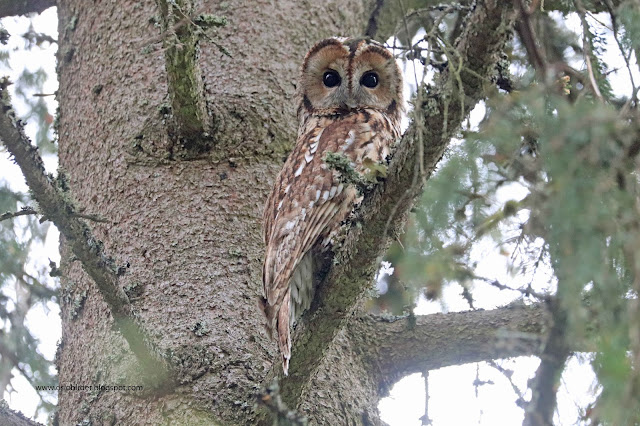 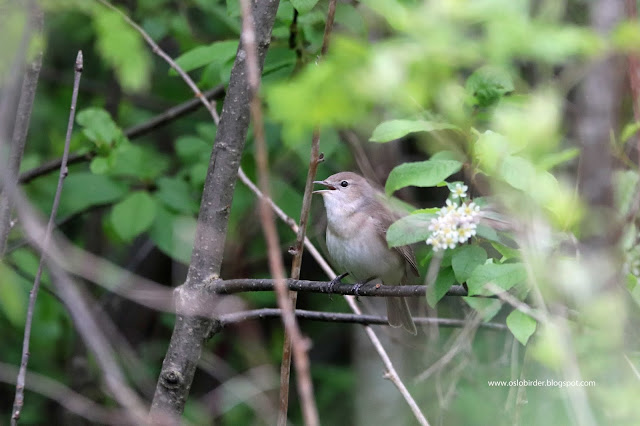 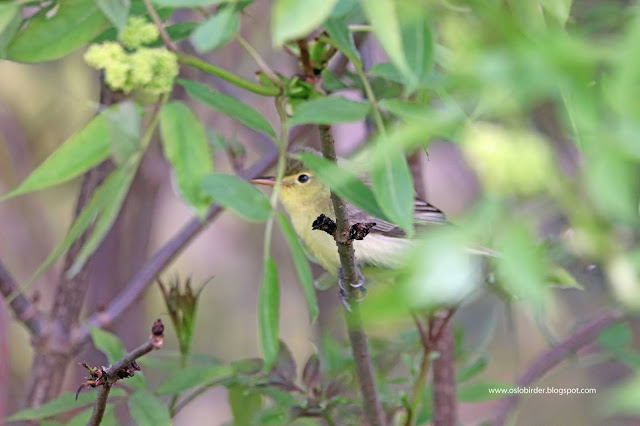 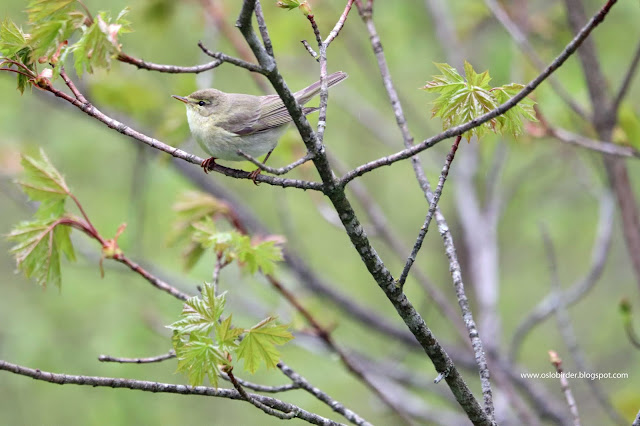 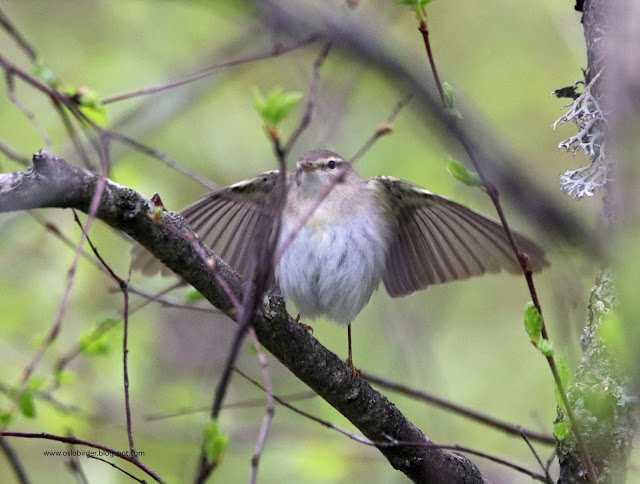 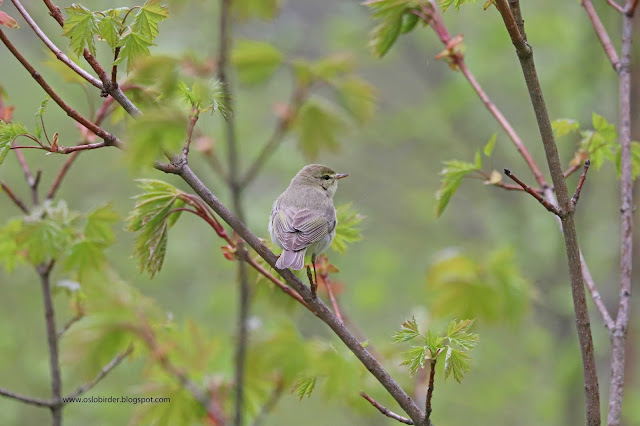 and a video where you can hear the male Lesser Spotted Woodpecker (dvergspett) from the cabin which had found a particularly resonant dead tree to drum on and sound as though it was another, larger, species

Seawatching from the cabin

At the end of June every year we are lucky enough to borrow a cabin along the coast south of Oslo. My blog posts from these stays are normally about butterflies and Red-backed Shrikes although I do visit the same area both spring and autumn to sea gaze.

We are staying at the cabin now for a long weekend and given the time of the year and some southerly winds forecast I had some high hopes for sea gazing. Second half of May is when there is a chance for Pomarine or Long-tailed Skuas, White-billed Diver, Brent Geese, sea duck and maybe a scarce tern.

Thursday evening when we arrived I could see some Common Scoter on the sea and I felt this was promising. I was up early the next morning and 3 hours gave me not a single Common Scoter.... I did have 10 Velvets going south but the only tern was a single Common. The only real evidence of migration was provided by Red-throated Divers with 17 birds noted. I did have one bird though that made the 3 hours worthwhile and that was a summer plumage White-billed Diver!

I gaze from the patio of the cabin (see picture) which gives an OK view with the scope but the angle is limited and I will miss birds flying close. The diver was indeed flying close and only just popped into view and if I had been at my usual watchpoint would have shown very well. As it was I enjoyed it for one second in the scope, ran to get my camera fom the table, struggled to get the camera to focus on the white sea and managed 5 grainy and blurry pictures of the bird flying away from me. Not exactly the best way to enjoy a bird of such quality...

Saturday morning gave me not a single migrating bird in 2 hours...

Sunday I slept in but occasional scans of the sea during the day revealed no sign of movement.

Monday morning however was much better. I was watching from 05:45 and initially the wind was a bit northerly but then it swung south although frequent rain made things a bit difficult. The absolute highlight was a pale phase Pomarine Skua with a Gannet, a large mixed flock of waders, Long-tailed Duck, Honey Buzzard and Hobby also good. Quite a few Common and Velvet Scoters and Red-throated Divers were the most numerous birds. I was clearly not fully on the ball though as far more was seen both south and then later north of me.

I had not expected much on the butterfly front as it was so early in the year but yet again my expectations were not met. It was actually very good even though quantity wise there was little. I saw fresh examples of both Grizzled and Dingy Skipper which are species I have only previously seen here but at end of June when they are tatty. The real butterfly highlight though was an embarrasing affair which I would have been scathing of were it a bird and another observer... but it also confirmed the importance of always documenting your records which I try to do. I saw a blue butterfly which I took a picture of but as I assumed only one species flew so early in the spring I did not look at any details. I posted the picture along with some others on Facebook and labelled it as Holly Blue (vårblåvinge). Luckily someone called me out and my first ever Green-underside Blue (kløverblåvinge) was a fact. This is a red listed species and wasn’t on my radar and I see now that an even rarer species Chequred Blue (klippeblåvinge) also flies early so I should be careful with the assumptions I make if I hope to add to my butterfly list!

There were plenty of other birds to entertain and with most of them singing it was a pleasure for the senses. Wood Warbler (including one with very short trills veryreminiscent of Western Bonelli’s Warbler), Garden Warbler, Icterine Warbler, Pied Fly, Redstart, Lesser Whitethroat and Lesser Spotted Woodpecker were just some of the birds. 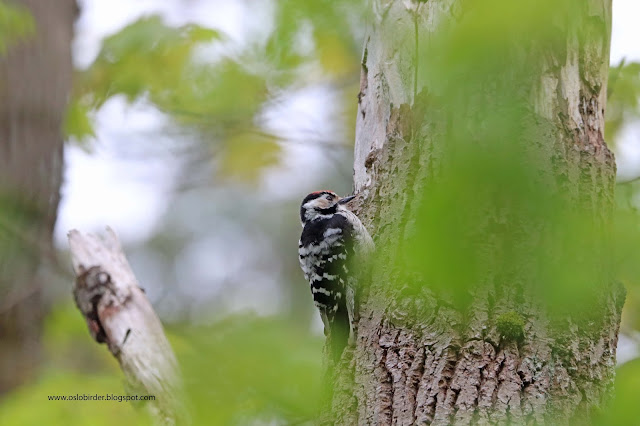 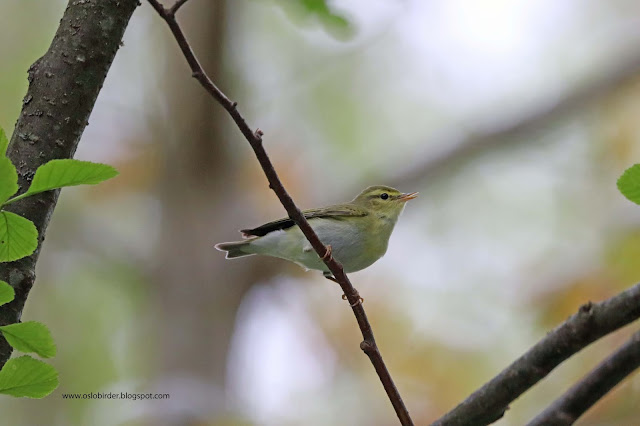 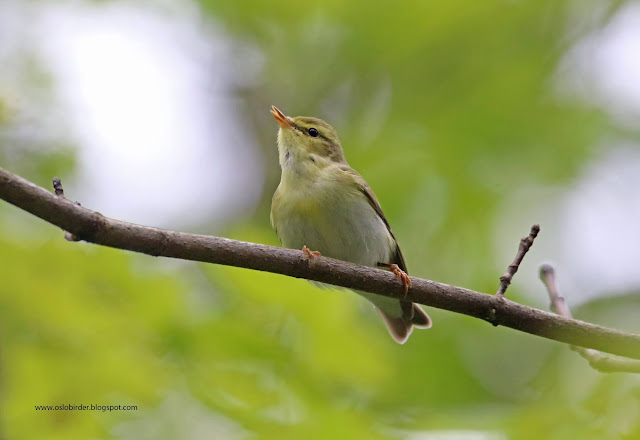 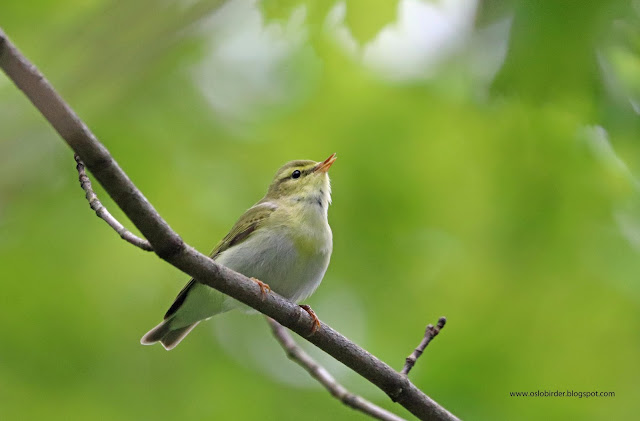