Rain and some birds

Yesterday had looked like it was going to be a very good day with probably numbers of waders and ducks going to be pushed down by rain. In the end the rain came too late in the day and there was too little. Today, it is blowing nearly a gale from the north east and there is sleet in the air so I doubt there will be much new to find today either. This spring is really delayed and therefore quite disappointing so far but it does also mean that there could be a mega day in the making when everything finally rushes north.

Going back to yesterday, Halvard had been out early and seen next to nothing. I rocked up just before 9 a.m and initially als saw nothing to suggest new arrivals. There were for example fewer Meadow Pipits than the day before and no ducks to be seen resting on the lake. As I walked around though the odd new bird showed up. First an early male Whinchat (buskskvett), then a Whimbrel, then I heard a Greenshank (one of 6 wader species), 2 Sand Martins flew over and around 11am there were suddenly raptors in the air. I had probably 6 Ospreys in total with 3 together, 4 Buzzards, 2 Sparrowhawk and 2 Goshawk.

Highlight of the day though was divers. On the lake there were 16 Black-throated Divers of which 14 came together in a flock at one stage. These are probably birds waiting for the ice to melt on lakes not much further north although two pairs usually stay and breed on Maridalsvannet. There were 4 Red-throated Divers on the lake which were at times very noisy and a flock of 13 flew over. This flock also had a single Black-throated with them and low cloud to the north caused them to fly a couple of circuits of Maridalen before pressing on. I have noted migrating flocks before but it is always cool to see them like this.

My eBird checklist can be seen here. 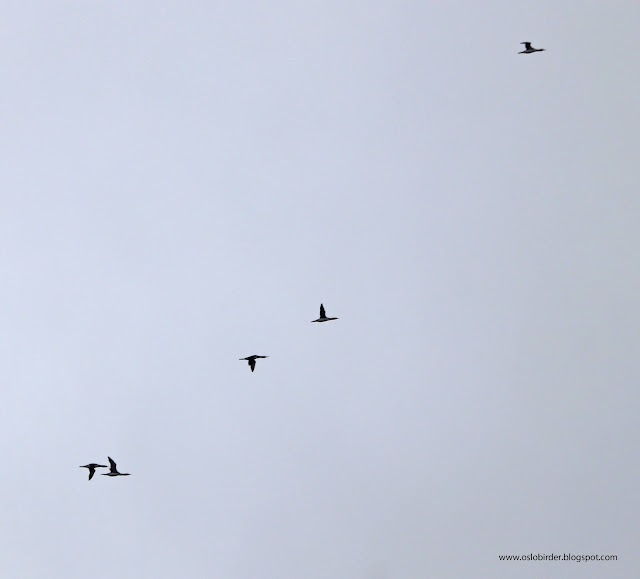