It’s been a while! Last week was half-term holiday and skiing and a visit to England meant birding took a back seat. I did go for a nocturnal walk in the forests north of Maridalen hoping to hear Tengmalm’s Owl but had to make do with Tawny and Pygmy Owl. Tengmalm’s have been heard a couple of places close to Oslo but it seems clear that the areas with good numbers of rodents (and therefore owls) are scattered thinly and one needs to be lucky to be in the right area.

The weather since we returned from England has been nothing but variable. On Saturday it was snowing heavily, yesterday it was blue skies and rising temperatures and today it was +5C, rain and mist!

I did venture out today in the hope of an Oslo tick but one that will not last long. An Arctic Redpoll was a good find at a feeding station on Saturday and was still present today. A very frosty individual it was a distinctive bird but within the same flock of 30 odd Redpolls were a couple of other birds that could well be Arctic Redpoll but were perhaps too streaked on the flanks. And that brings us to the reason that the tick will not last long – Arctic Redpoll is on borrowed time as a species. New research has shown that the differences between Redpolls in both size and plumage are not backed up by DNA and that it is best to consider redpolls as one species which plumage differences being clinal and reflecting adaption to climate and habitat. Every flock of Redpolls one sees contains birds with a variety of plumages. Every now and again there are very frosty individuals that match the commonly accepted characters of Arctic but there are also many birds that leave you scratching your head and these are just part of the clinal variation of which Lesser Redpoll is at one extreme and Arctic at the other. The really frosty individuals will always be a joy to see (and a rare bird in Southern Norway) even if they don’t count as a “tick”. 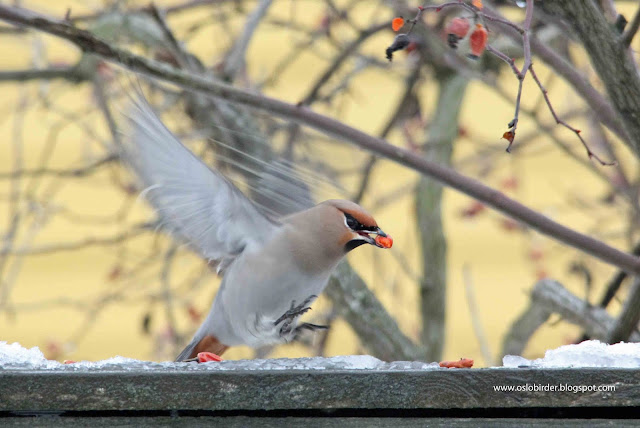 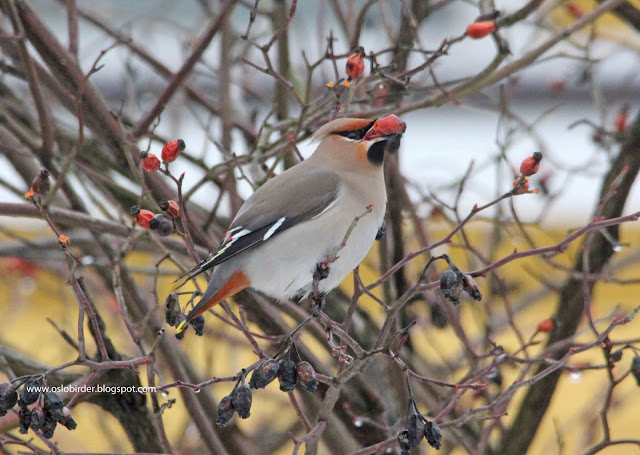 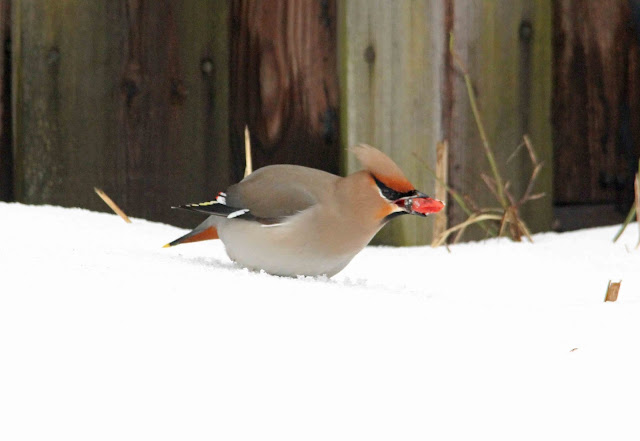 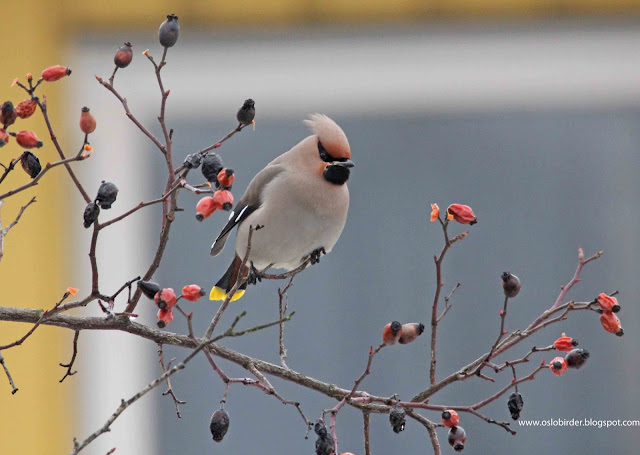 After the success of Tuesday nights owling trip I thought that a trip to the same area in the daytime might pay dividends in the form of a Hawk Owl or two.

That was not to be the case and I also failed to find Hawkie at any of three sites that held birds on Saturday which goes to show what a chance game birding can sometimes be. The day was saved on the Hawkie front though when I received an email about a bird very close to Oslo which I was able to admire on the way home.

My trip into the forest though was not entirely in vain. Woodpeckers are responding to the lengthening days and I heard drumming Three-toed, Black and Great Spotted. Black Woodpecker were unusually vocal with birds at 4 sites (with all these Black Woodpeckers and the holes they make then there shouldn’t be any problems for Tengmalm’s Owls to find nest holes). I did have a single Pygmy Owl which showed well but in true Hawkie fashion it chose the tallest tree in the neighbourhood and just stared down at me although I did glimpse it lower down after seeing it dive after some food (probably a tit). I also had a fly over male Capercaille and 5 Common Crossbills (I also had a small flock in Maridalen on Wednesday) so there are still some of them around although they were not singing and are probably just birds on the move. 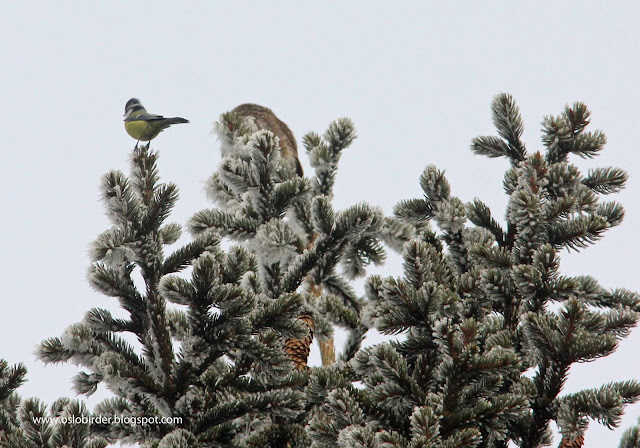 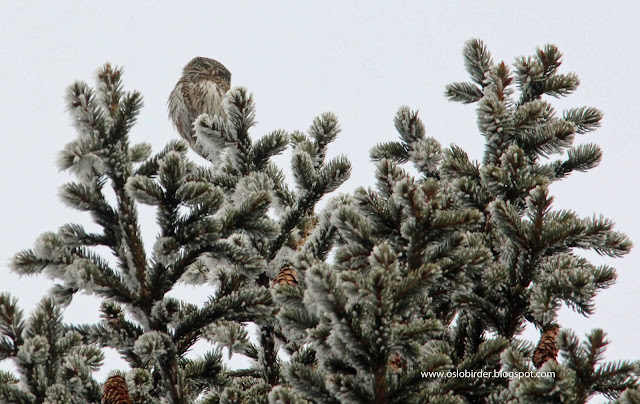 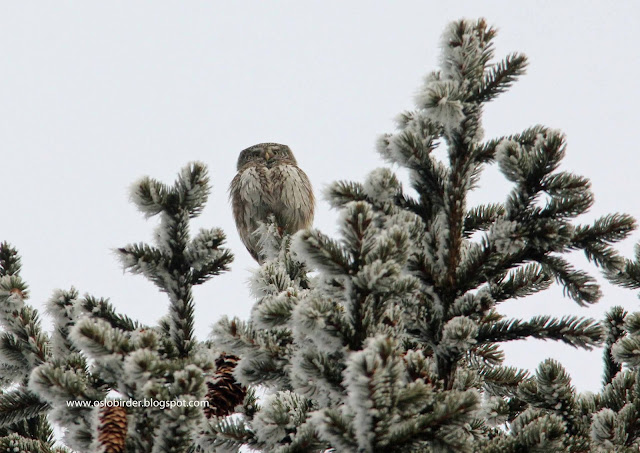 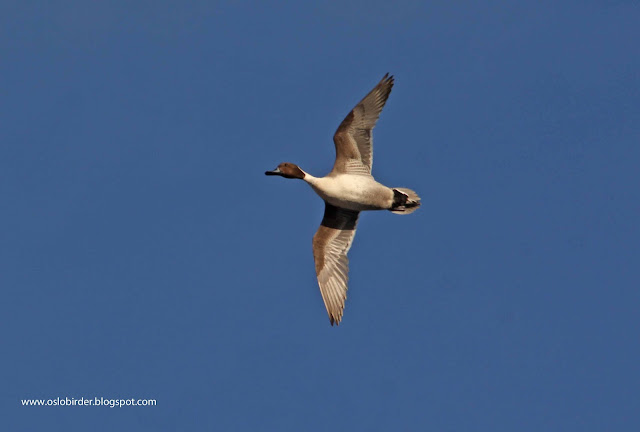 Some pics of Hawkie too in case you are not tired of it :-) 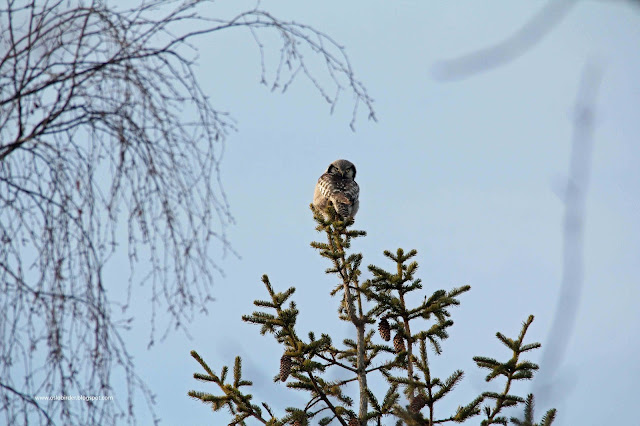 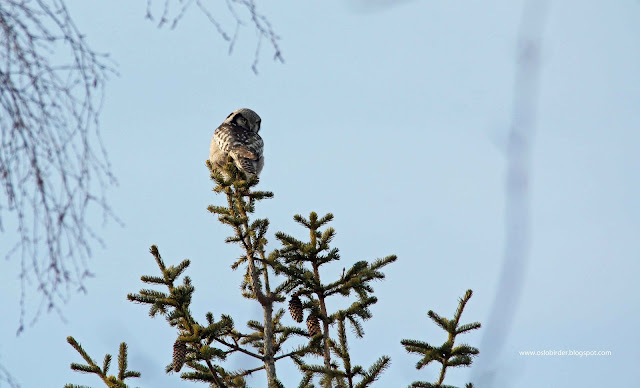 Yesterday evening/night I was out with Per Christian to listen for owls in the deep forests east in Akershus county. It was a perfect night: no clouds (although the moon didn’t appear low over the horizon until 21:30), absolutely no wind such that sounds travelled far and at only -8C it wasn’t too cold.

There are clearly lots of rodents (and therefore owls) in some areas but an absence in others. Over a stretch of only 7km we heard around 10 singing males plus heard sounds from three other birds which were probably females. It was difficult to be sure exactly how many birds we were hearing as the songs were carrying far (definitely over 1km and according to BWP they can carry up to 2km) but at one stage we could hear three singing birds at the same time.

Outside of this 7km stretch though we didn’t hear any other birds! Over another stretch of 12km which has held multiple birds in previous years we did not hear a single bird. Why rodents should be abundant in some areas and presuamably near absent in other nearby areas is one of those big mysteries.

We were out from 18:55 to 23:00 with the sun having set at 17:05 and it getting properly dark around 18:00. There was already a lot of activity from 19:00 and although birds were still singing at 23:00 there was less activity. Birds also seemed to be moving about and when we tried to call them up they responded by stopping to sing but seemingly coming into to investigate us as we glimpsed two in torch light as they flew over the road. We were able to pin down one bird which was very interested in who was making owl sounds and watched us at close range for a number of minutes but remained silent throughout except when what we took to be a female called nearby when he then flew off towards here and gave a couple of calls (but not song).

It is still very early in the season and my belief is that owls are still moving around trying to find the best areas for food and have yet to establish (and defend) territories or form pairs.

I feel a bit uneasy when using spotlights and camera flash to observe these nocturnal creatures with their large eyes and the use of flash (just the inbuilt flash on the camera) did result in red eye on the owl but we were there for no more than 10 minutes so I think it is ethically OK especially as these birds are not the subject of this at any other time.

I took pictures with both the bazooka and superzoom and of course in the dark it is a bit of a challenge but by setting the superzoom to Auto and letting the flash fire gave surprisingly good results although it was completely necessary to have the bird lit up by the flashlight to find it in the viewfinder and focus. I also managed some nice video.

Despite there being so many Tengmalm’s Owls were didn’t hear any other owl species so the Ural Owl nestbox and Great Grey Owl platform that we put up a couple of years ago will probably remain unused again…. We did hear foxes including one which was really making a din and may well have heard wolves although can’t quite rule out the possibility it was dogs from a house in the forest. 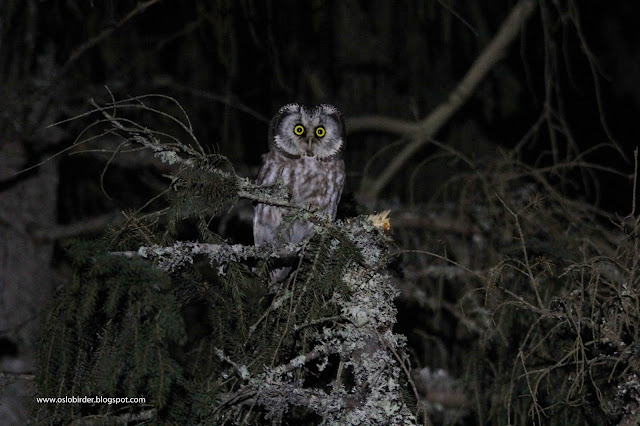 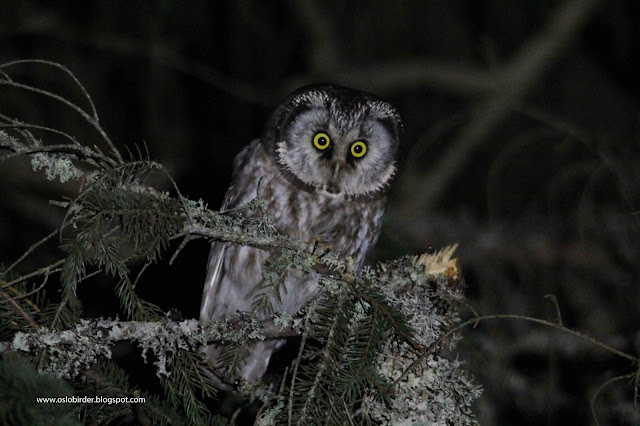 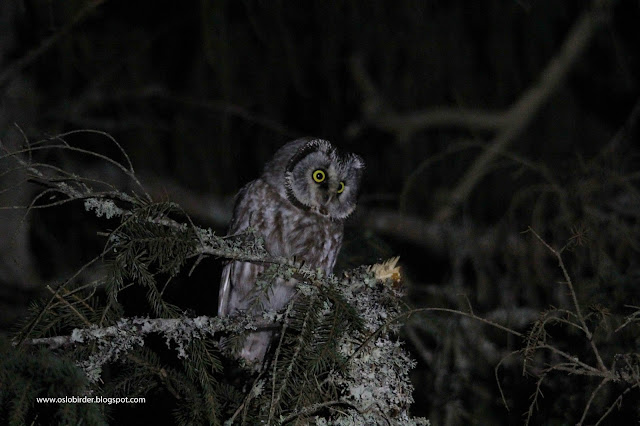 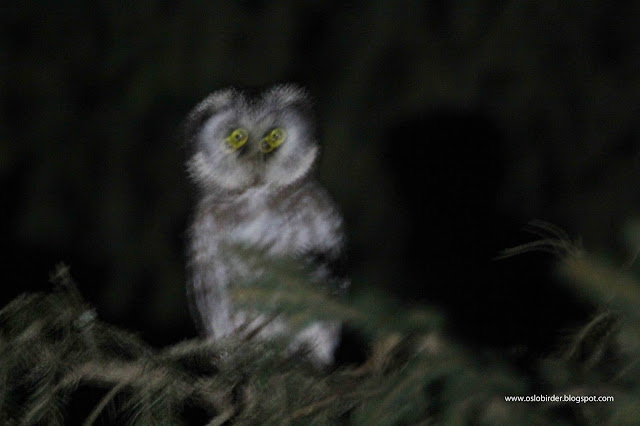 Earlier in the day I paid a visit to the Opera to look at the gulls. After nothing interesting having been seen (despite people searching) over the weekend, the Glaucous was then seen on Monday and yesterday I found the Iceland. The chances of finding both together (a unique Oslo sighting should it happen) must be high! There was also a very striking Herring Gull with bright yellow legs and a particularly white head and colourful bill and eye ring. The wing pattern rules out it being a real Yellow-legged Gull and this particular individual has probably been around for a few years and was displaying with another adult and may well be a local breeder. It is a wonder that it is still without bling!

A Local Owl for Local People

Today was one of those fantastic winter days with blue skies, no wind, snow covered trees and without it being too cold. I just went for a walk in the forest but it wasn’t a completely random walk. A Hawk Owl had been seen in the forest west of Maridalen at the weekend. It was right by what is perhaps the most popular cross country ski track in Oslo (and therefore perhaps also in Norway which would consequently make it the most popular ski track in the World Ever!) which goes from Sognsvann to Ullevålseter. I didn’t tie some long sticks to my legs but instead walked in from Maridalen which was an easy walk with the snow in the forest being no deeper than 15cm. I tried to find Pygmy Owl on the way with no joy and a few tits and a single Great Spotted Woodpecker were the only birds that revealed themselves. When I reached the (frozen) lake by which the owl had been seen I walked out on the ice into the middle of the lake and then scanned the treetops around the lake and bingo! A Hawk Owl with a couple of Nutcrackers keeping it company. It was quite a walk to the owl and I went into the forest to try to come closer to it. It proved very difficult to locate the owl. I found five Nutcrackers and a Jay that were sitting on tree tops alarm calling but it took 10 minutes to actually find the owl. These were my first Nutcrackers of the year and I have never before found so many in the winter months. The live a very anonymous life in the forests around Oslo and clearly we need more Hawk Owls to make them show themselves!

I didn’t see many tracks in the snow from rodents but there clearly are a lot here if the owl has stayed loyal to this area for at least three days. This is also promising for Tengmalm’s Owl which I will soon go searching for (although a quick trip around Maridalen just after dark yesterday did not reveal a single owl of any species). 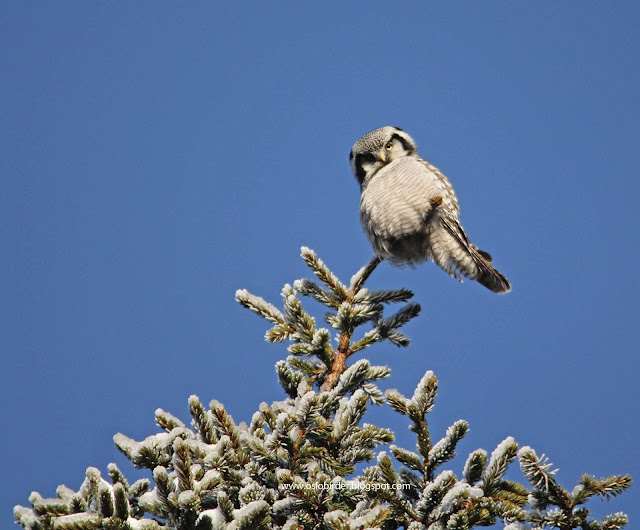 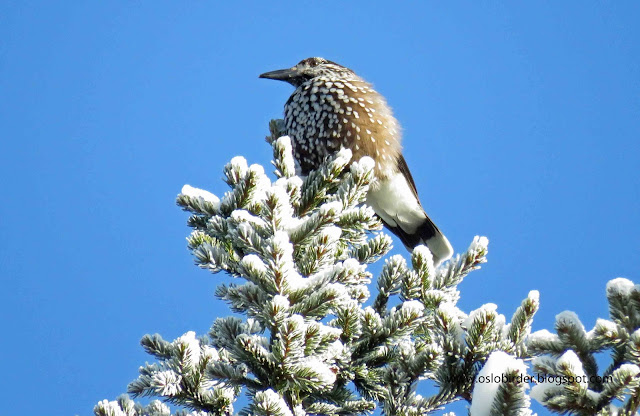 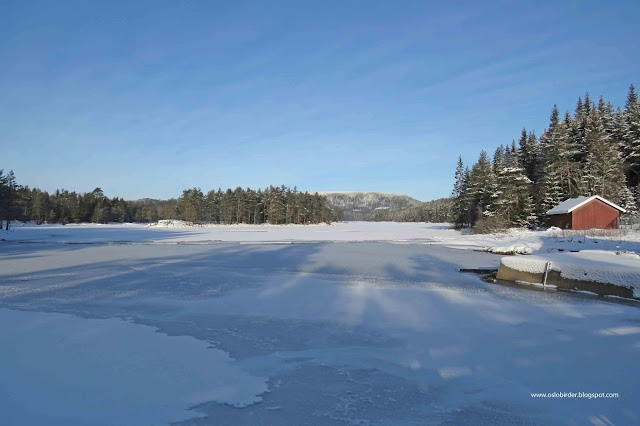 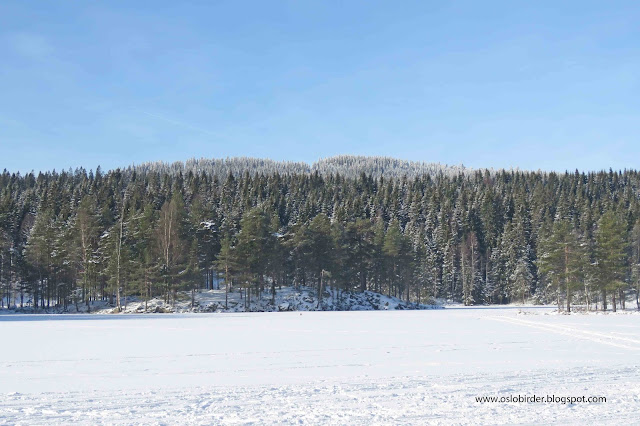