The tropical conditions have not brought as many southern rares to Norway as one would hope for and in fact there have been fewer rare birds so far this spring than one would normally expect. Yesterday a couple of Spoonbills turned up south of Oslo and most surprising of all a 1st summer Ross’s Gull (hardly a southern bird..) turned up at the Great Big Dump so this gave me some hope.

The hot weather though has caused a rapid decline in water levels at Årnestangen and I interpreted the published water level this morning to mean that there would once again be some mud at Årnestangen. Årnestangen and Nordre Øyeren generally offer the best chance of something exciting around Oslo and although it would have been best with a thunder storm I thought that it would be worth the long walk out. From the car I could see that there was indeed a small sandbank exposed so I set off on the 45-minute walk confident I would find marsh terns, Black-winged Stilt, Red-footed Falcon, Spoonbill or something of that calibre as reward for the long walk and the extreme numbers of mossies.

Well I didn’t get quite that level of reward, but it was worth the trip. The sandbank held a 1st summer Little Gull, 7 Ringed Plover, 1 Redshank, 1 Dunlin and a Broad-billed Sandpiper! There were quite a few male dabbling ducks which were nearly all males but amongst 36 Teal were 3 females and this caused loads of commotion with displaying and calling. Two male Garganey were also calling a lot and showed very well. Both had started moulting and one was a particularly poorly marked bird which I don’t think was just a result of moult.

Raptors were again in very short supply with 3 Ospreys and a couple of Marsh Harriers the only ones noted. Marsh Warblers were singing but I failed to find anything scarcer other than a single Sedge Warbler.

Money on the GGs

I was guiding again in Hedmark yesterday and was basically hoping to give Rob and Gail from Australia a repeat of Saturday. The Great Grey Owls were as expected still there and young had definitely hatched in one nest and most likely also in the other. It was fantastic to see one of the birds clearly tending to a youngster in the nest and it was moving so carefully – it probably had unhatched eggs plus tiny young there.

The Slavonian Grebe and Red backed Shrike were also in exactly the same places and we heard 2 Ortolans singing but still failed to see one. A big disappointment was that I could find the Hawk Owl(s). I did find a couple of adult feathers by the seemingly empty nest hole and am a bit worried for what may have happened in the three days since Saturday. If the young had left the nest then I feel sure that we would have found them and the anxious parents fairly close to the nest so maybe there has been a breeding failure. A Black Woodpecker turned up again and drummed and a pair of Redstarts were clearly breeding in the area. Yet again raptors were noticeably absent and we only had a single Common Buzzard on the whole trip.

Last night and today I spent some time in Maridalen where the River Warblers is still reeling away and three Marsh Warblers are now singing. The Lapwing is still incubating in the middle of a newly sown field under the baking sun and must be contemplating the meaning of life. I also tried again for the Black Redstart in the city centre but yet again failed where others succeed. 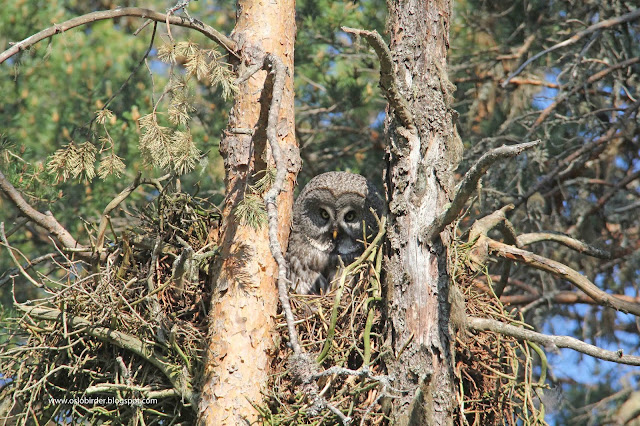 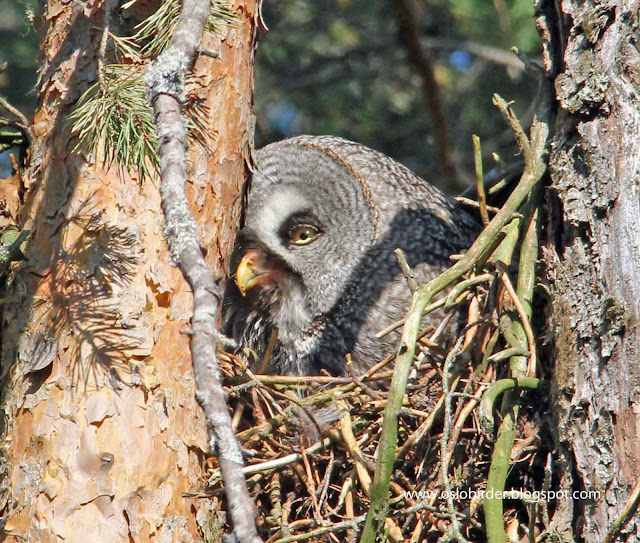 Being the sensible boy that I am I went to bird early last night and awoke this morning to see that a far less sensible Per Christian had found a singing River Warbler last night in, of course, Maridalen.

I visited just before 9am and first heard a singing Marsh Warbler and then the River Warbler and I was lucky enough to see him J This is now the third record in Maridalen and with this warm weather set to continue could just be the start of a run of good birds. The rest of Maridalen was also on form with finally a male Red-backed Shrike who was acting as though a female may be on the nest, Common Rosefinch and a second Marsh Warbler.

Butterflies and dragonflies are also appearing in good numbers and are putting my ID skills to the test. 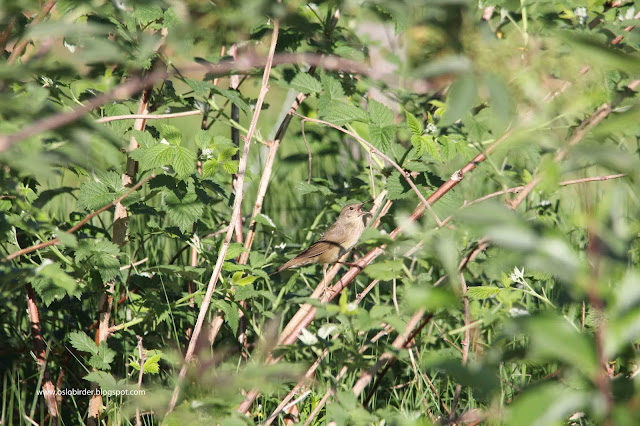 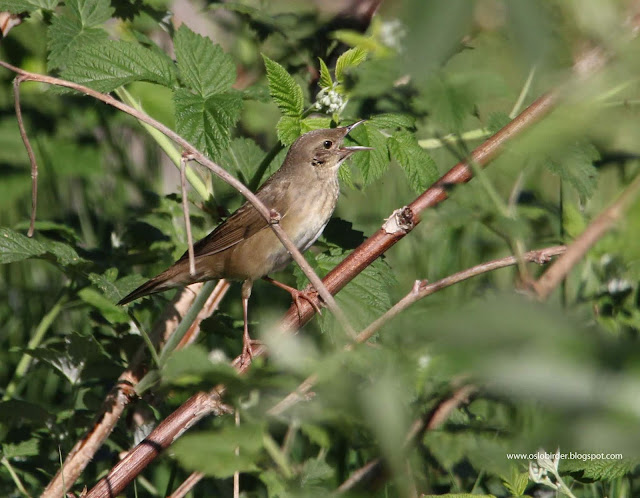 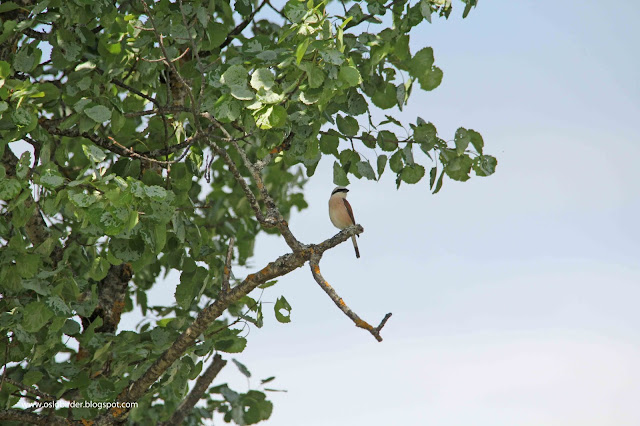 Yesterday I was guiding Mike and Dee with one specific species in mind: Great Grey Owl. This was a species a long time in the coming for Mike and one I knew how to find for him. The destination was of course Hedmark but the drive went quickly and first decent bird of the day was a Great Grey Owl on the nest! She did not look to be happy in the crazy heat we are experiencing at the moment and I fear for the young when they hatch if the heat continues. Temperatures reached 28C today but with no wind it felt much hotter when in the sun.

After this we had a Hawk Owl perched by what was presumably a nest in an old Black Woodpecker hole and then a Black Woodpecker came and started drumming nearby and then we finished the day with another Great Grey Owl on the nest!

Combine this with a singing Ortolan (heard only), singing Cuckoos, Slavonian Grebe, Red-backed Shrike and the commoner woodland birds including Parrot Crossbill then it was a great day, but boy was it hot!
Despite conditions being clearly suitable for owls there was once again a scarcity of raptors with just a single Kestrel, a brief view of a probably Honey Buzzard and a distant dot that was most likely Goshawk. Given that both GG Owls were breeding on old Buzzard nests it is strange that we didn’t see one!

A nocturnal trip to Maridalen on Wednesday night revealed Woodcock and Snipe but nothing more interesting. It would appear that another 3 birders were also out during the course of the night and it seemed I missed a Marsh Warbler and lots of Tawny Owls (I have yet to note this species in 2018!).

On Thursday I biked a but around Oslo and failed to find Black Redstart even though one seems to have settled down at last years breeding site. A flyover Hobby here though was a good bird. I found a singing Icterine Warbler just a stone’s throw from the house which is a god urban record but found no House Martins at a colony that has seemed to decline year for year and maybe now is over. It is possible though that the extremely hot weather we are having has meant that nest building is impossible and they may just be waiting for rain or else have moved elsewhere (there are quite a few in Maridalen).

In the evening Per Christian went out for our first proper nocturnal trip of the year. It is still early in the season but the very hot weather which is forecast to continue should be good for bringing in birds. We started in Østfold where a Bittern has been present a while and this was booming already when we arrived at 20:15. The reedbeds here were not extensive at all and we thought we might actually see it but gave up after an hour. We did have a singing Wryneck nearby (only my third record in 2018) but no raptors in the area – I had expected to see Hobby and Honey Buzzard.

Working our way back to Oslo we had 3 Marsh Warblers, 2 Thrush Nightingales, 2 Nightjars singing together, a Corncrake and finally in Maridalen a Tawny Owl. With three Moose this must go down as a successful start to the season. The Corncrake and Nightjars were particularly pleasing as they were at close range and could really be heard well although my attempts at recording them have ended up in the recycle bin.

Today had me walking in the hills above Maridalen searching for Hazel Grouse and I succeeded with good views of a male but I had no repeat of my Greenish Warbler discovery of last year. Wood Warblers have also finally made it into Maridalen so maybe things are just delayed. There was also a Marsh Warbler singing in Maridalen which we had not heard around midnight and most likely arrived in the early hours. 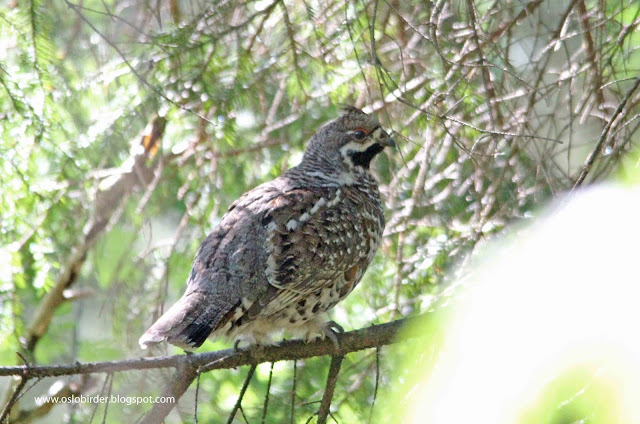 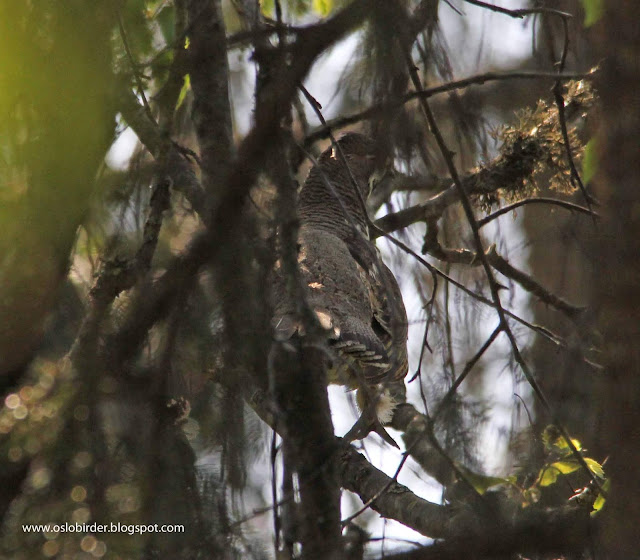 It also looks like 2018 will be a good year for butterflies and today I had my first Green Hairstreaks and Holly Blue plus Camberwell Beauty, Comma and Speckled Wood.

Back in Oslo I have seen my first Common Rosefinch and Marsh Warbler and therefore all the common summer migrants of the Oslo area are back. Migration of waders and ducks is all but over but the end of May is the time for proper rarities to turn up. My focus however is going towards breeding birds and the last two days I have visited Sørkedalen, Maridalen and Nordre Øyeren. Interesting breeders I have encountered include Long-eared Owl, Whooper Swan, Garganey, Little Ringed Plover, Three-toed Woodpecker, Goshawk and Red-breasted Flycatcher but notable absences are Wood Warbler, Wryneck and Red-backed Shrike which seem to be here in very low numbers (so far) this year. Pied Flycatchers seem to be abundant but I have yet to find any breeding Tawny Owls so far and fear that the winter paid a terrible toll on this species.

Sand Martins look like they might breed in both Maridalen and Sørkedalen which are the only breeding sites in Oslo. Lapwings are also present in both valleys with two pairs sitting in Sørkedalen but seemingly only one pair remaining in Maridalen and I don’t think they have laid yet. 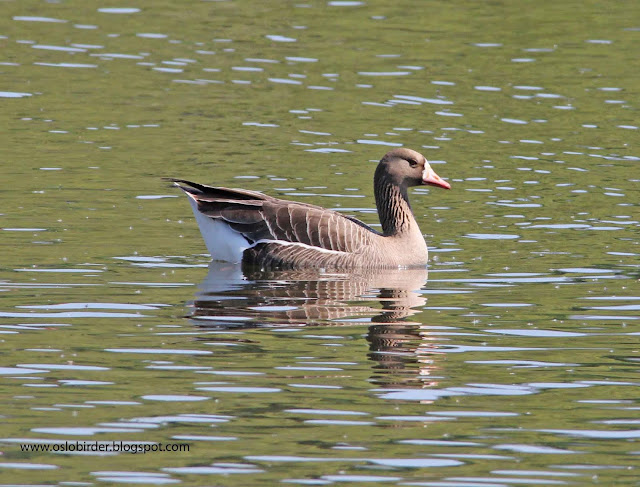