My body started complaining again this morning so some exercise was needed. A walk in the forest sounded like a good idea. Blue skies and temperatures down to -5C meant it was a crisp walk and I had high hopes of some catching up with Grosbeaks. Well, I’ll keep hoping. There was actually very little to see or hear and in the course of 4km I had to be content with a single Dipper (fossekall), 2 Goldcrest (fuglekonge), Great Spotted Woodpecker (flagspett) and best of all a flock of 20 odd Redpolls (gråsisik) and 4 Siskins (grønnsisik). As with a previous Redpoll flock this autumn these were very pale birds with what I consider an unusual call – a sign of birds from far flung parts?

On Maridalsvannet three adult and two juvenile Whooper Swans (sangsvane). The juveniles kept separate from the adults and looked as though they had been left to their own devices by their parents.

With few birds to photograph I tried some “arty” shots 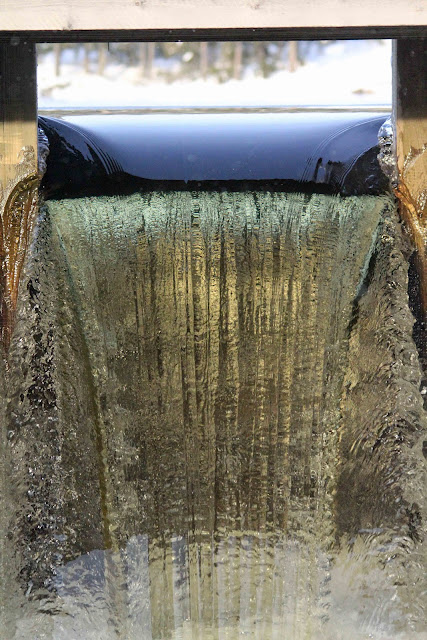 Today I had the company of top Spanish birder, Fernando Arce, who is in Oslo for two years undertaking research at the University.
We headed for Østfold and on the way I tried to prepare him for how few birds we would see at the end of November in this part of town but I still think he was surprised by how few we saw! We did have some quality though.
The Moss Hawk Owl (haukugle) failed to show on the way out but on the way back we located it perched behind the warehouse buildings and enjoyed good views as it perched on the tallest tree in the neighbourhood. This bird appears a far more substantial bird than the one in Maridalen and I wonder if that is a sign that this bird has found a good supply of food (it has been around for nearly a month) whereas the Maridalen bird hadn’t.
Kurefjorden served up two Rough-legged Buzzards (fjellvåk) on the islands with both actively hunting by hovering. We also had a few Slavonian Grebes (horndykker), Velvet (sjøorre) and Common Scoters (svartand) but little else except for a roadside Great Grey Shrike (varsler) on the approach.
Returning to Oslo after a cold day in Østfold we just managed to squeeze in Maridalen before it got dark which these days is before 1530 even on a day like today with blue skies and sun. Still no sign of the Hawk Owl but four adult Whooper Swans (sangsvane) flew over and a big surprise was a Great Grey Shrike  – my first of the autumn here.

If you are tired of pictures of Hawk Owl then look away now....

The weather cleared up today with some blue skies and sun. Unfortunately the Hawk Owl does appear to have moved on. Its preferred verge is now covered in mucky snow from the snow plough so I doubt it will be easy to catch rodents there. On Maridalsvannet I couldn’t locate the family party of Whooper Swans (sangsvane) but a group of three adults were new in and an indication that there is movement going on perhaps related to the cold weather. Later on I also had a single Whooper Swan overflying Fornebu which strengthens this thought. At Fornebu I had hoped to find some Bearded Tits (skjeggmeis) in the sunshine but instead had to be content with a Chiffchaff (gransanger) that briefly popped up out of the reeds. It did not show too well and didn’t call but was quite frosty in colour so must likely of one of the eastern subspecies.

Also in Maridalen a couple of Dippers (fossekal) - Norways national bird (does the UK have a national bird?) - were on show at Hammeren which is a favoured winter locality for them. One was even singing.

Finally, the local "newspaper" on Værøy, Værøyposten, has carried an article written by yours truly. I have included a screen shot of the article or you can follow this link. I think they need to take the "amatør" out of my title though! 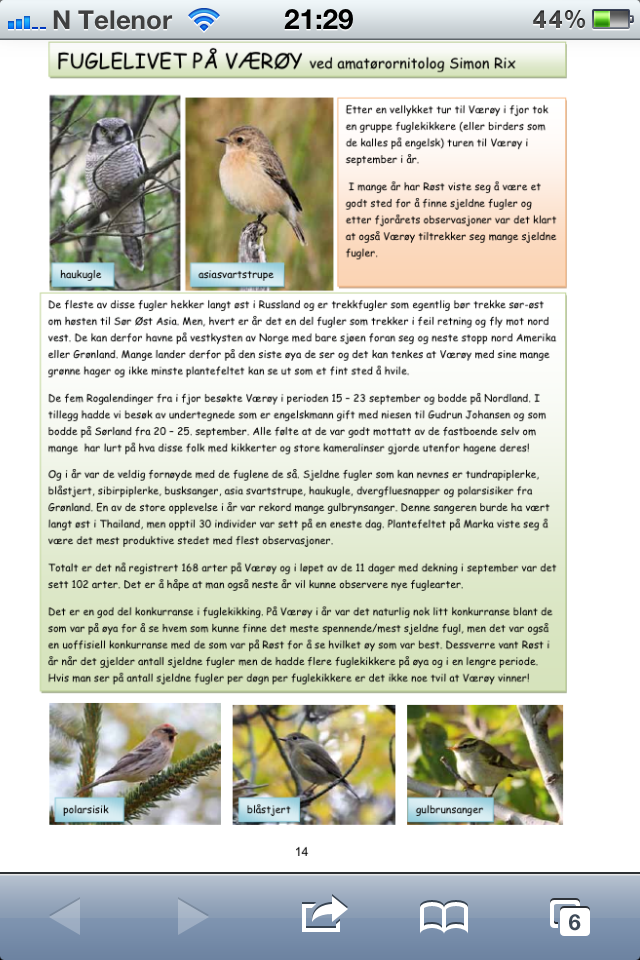 In bitterly cold northerly winds and horizontal snow showers it was perhaps not surprising that I didn’t see the Hawk Owl in Maridalen today. Surprisingly though the Whooper Swan (sangsvane) family was still on the lake. I have wondered whether one of the birds is injured which is stopping the family party migrating but all looked healthy and they are clearly finding enough food by up ending in the lake.

At the risk of needing to change the name of the entire blog to the ”Hawk Owl Admiration Society” I will bore with you some more pictures and words on the Maridalen Hawk Owl.

After not having been seen by either myself or three others yesterday it was back this morning in exactly the same place as we had seen it on Saturday. Hawk Owl is normally a rare bird in southern Scandinavia, however there are cyclical crashes in rodents populations further north and east and depending on the geographical scale of these crashes large numbers of Hawk Owls can appear in the south. The last big invasion in the Oslo area was in 1984/85 so for many (myself included) this is the first chance to get to see this species without having to travel far. In 2010 and 2011 there was a cyclical high in the rodent population in middle and northern Scandinavia resulting in a many breeding pairs of Hawk Owl in Norway. During the winter of 2011/12 the rodent population collapsed such that I am not aware of any breeding Hawk Owls in Norway other than in Finnmark in the far north – the birds moved to where there was food. The birds that are now turning up around Oslo are therefore not birds that have bred in Norway this year. I suspect that they actually come from much further east in Russia as Finland and Sweden have also seen similar invasions.

As this Hawk Owl in Maridalen has chosen to remain loyal to the same place for at least four days then there must be sufficient rodents for it and with luck it will hang around even longer. Today there was falling snow and this led to new photographic opportunities so I will permit myself to show a few new pictures. 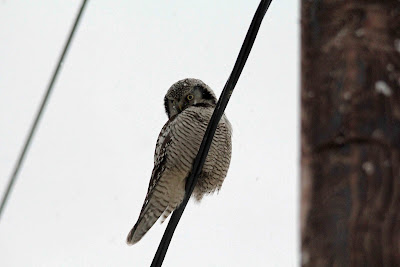