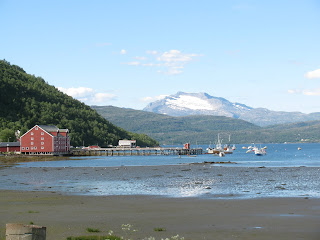 We have spent 3 days at the family cabin (or hytte as they say in Norway) near Naurstad which is 30 minutes inland from Bodø by a small fjord. The fjord had feeding pairs of Red and Black Throated Divers alongside more numerous Oystercatchers and Common and Herring Gulls. A lone Lesser Black Backed Gull was of the race fuscus and a Grey Heron, Redshank and Common Tern also put in an appearance. 2 Waxwings flying over were unexpected and perhaps indicative of local breeding. Redpolls were common including a fine male feeding om grass seedheads only yards away. A Woodcock flew over in the evening and nearby we had an elk and fox. A well worn animal track up from the fjord to the cabin which continued under the veranda was presumeably from an otter. Nearby farmland turned up a surprising flock of 13 Ruff which comprised both males and females all of which appeared to be juveniles. The size difference between the sexes was very obvious with the males appearing twice as large as the females. Also nearby a flock of 15 GoldenPlover and a single Shelduck, 3 Yellow Wagtails and a family party of Spotted Flycatchers. 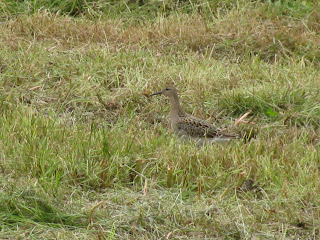 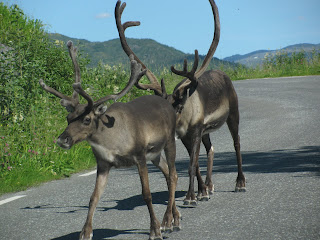 A day trip to visit relatives at Røsvik (north of Fauske) had us passing Klungsevika which is a well known bay which often holds good numbers of duck, divers and waders. There were many duck but without a scope I had trouble identifying them at distance. There were definitely many hundred Velvet Scoter plus over 100 Goldeneye and Eider, 3Long Tailed Duck and small numbers of Wigeon, Tufted Duck and Red Breasted Merganser along with 7 Black Throated Divers. We also passed Kvittblikvannet where again a telescope would have come in handy. I did pick out a couple of Slavonian Grebes, a family party of Whooper Swans, Wigeon and Tufted Ducks. Røsvik is a small village by a bay in a fjord and we were greeted by glorious sunshine and 23 degrees. There were many hundreds of gulls here including Black Headed which must have bred nearby as there were many newly fledged young. Eiders, Goosanders and Red Breated Mergansers were on the see and waders were represented by Oysrtcathcer, Redshank and Curlew. 2 porpoises were also glimpsed. A Golden Plover in a small cemetry under large trees was an unexpected sight. 2 Reindeer along the road must have been tame animals but 3 elk by the road on the way home were definitely not and included the first horned male I have ever seen. 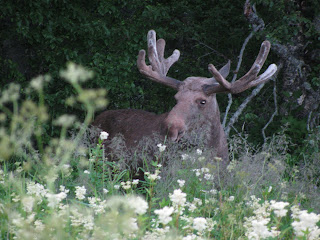 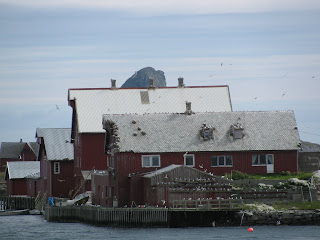 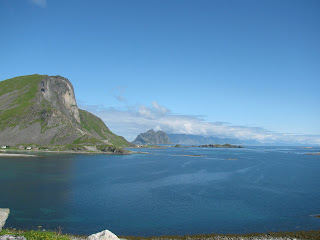 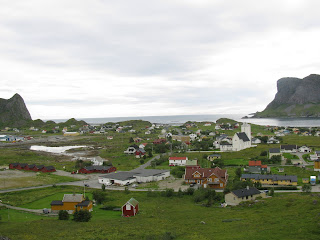 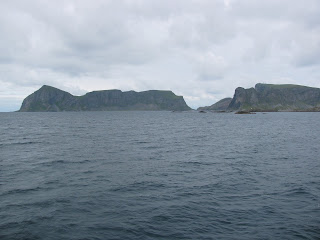 Another day on Værøy. Off the north of the island were good numbers of Kittiwakes plus a few Goosander (rather than Mergansers). A pair of Lesser Black Backed Gulls looked to be closer to the race Intermidius although apparantly there might be a hybrid population in this part of Norway between Graellsii and Fuscus which rather complicates matters . Highlight was a light phase Arctic Skua. On land a Cuckoo seen twice perched on wires and dropping down for food was possibly a returning migrant bird as were 2 Whimbrels on the shore. Overhead 2 adult White Tailed Eagles were circling over the cliff top.
Back around the wetlands near the harbour the female King Eider was still present on the same pool alongside a female Pintail with 7 young in tow.
Lagt inn av rixy kl. 22:11 No comments:

Spending a few days on the island of Værøy which is one of the outer Lofoten islands. Birdlife is scarce here (if you don’t count the seabird colonies which are only accessible by boat). Around the harbour were numerous Herring and Common Gulls with smaller numbers of Great Black backed Gulls. Amongst them were 2 Lesser Black Backed Gulls which were of the British race Graellsii. Birds of this race apparantly breed in Lofoten alongside fuscus. A couple of Kittiwakes were year ticks as were a couple of Gannets seen distantly over the sea. A few Common Terns were fishing in the harbour to add to a couple of Arctic Terns seen yesterday on the ferry ride over (this was a very very choppy ride with much vomiting!!). Eider ducks, Greylag Geese and Red Breasted Mergansers were common and all had young along with a a handful of Mallards including a female with 3 young. Best duck though was a female King Eider which gave great views and was even heard calling. This bird had a large amount of fishing line around its body which probably explains why it was here at this time of the year.Waders were represent by a pair of Runged Pover, Redshank and Oystecatcher. Passerines were represented by numerous Redpolls pluss maller numbers of Meadow Pipit, Wheatear, House Sparrow, Starling and Willow Warbler.
A scan of the sea at the north of the island had close in Black Guillemot, Razorbill and Shag and distant groups of Puffins flying past.
Lagt inn av rixy kl. 23:27 No comments: 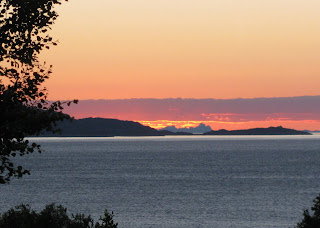 Spending a few days in Bodø which lies just north of the arctic circle. Little to report birdwise so far with just a White-tailed Eagle, a Black Guillemot and some truly wild Greylag Geese to liven things up. The following picture was taken at quarter to one at night!
The midnight sun unfortunately was not visible as it was behind an island but here you can see the light from the sun as it rises!
Lagt inn av rixy kl. 21:33 No comments: 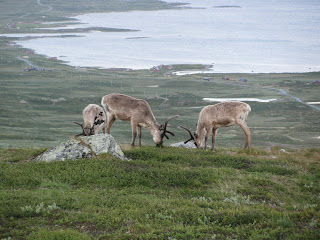 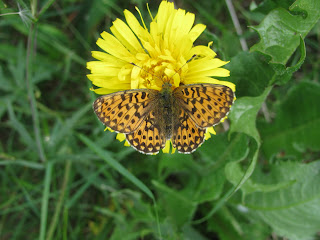 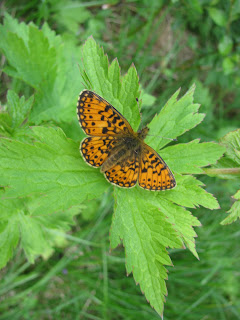 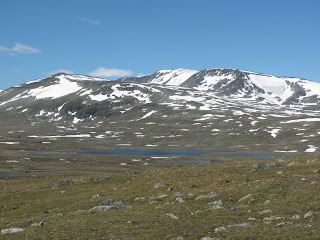 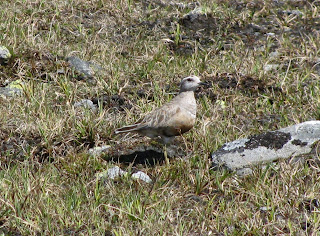 Yesterday evening I was out from 2130 until 0130 (which involved getting locked out of the hotel) in a quest to find lekking Great Snipe. Despite is being virtually windless and this perfect listening conditions, and despite the habitat looking good I was unable to find any. I did have 2 Woodcock in an area of birch trees and an Elk above the tree line but the only Snipe were 2 singing Common Snipe one of which was at the hotel.
Lagt inn av rixy kl. 16:57 No comments: