First thing this morning I was in a TV studio with Bjørn Olav Tveit being interviewed about jealousy in a birding context. After being cut and clipped beyond recognition the footage will appear in a humoristic programme about strange forms of jealousy. I’m not sure I actually want to see the final output.....


I just had time to check out the action in Maridalen and found there was not much happening. A group of Wood Pigeons (ringdue) flying over included a Stock Dove (skogdue) and on the water a male Teal (krikkand) was a surprise given I had none yesterday amongst all the other wildfowl. Woodpeckers our now becoming very vocal with Great Spotted, Green and Black revealing themselves today.


Here are a couple of videos from yesterday.

The first one shows the Bewick’s Swan (dvergsvane) alongside Whooper and Mute Swans and the second shows the fabalis and rossicus Bean Geese. The more I look at the (poor) footage and pictures of the rossicus at the end of the film I wonder whether I have misidentified a Pink-footed Goose but through the scope I had no doubts as to the ID. It just looks so small in the video....I await to see what others report this weekend.

Bounce back with style


What a day. I know I come with comments like that quite often but today was good, really good. One of those spring days that you only have a chance for a couple of times each year and this year it has happended about a month earlier than usual.

My initial goal for the day was to check the spring staging grounds of the Scottish Bean Geese. One of the two satellite tagged birds has already left Scottland and is in Denmark. Its journey over the North Sea was initially towards Norway before it took a sharp right to Denmark so I though that there was a chance that some birds could have already come to Norway despite the VERY early date. The fields at the staging site are all snow free and it looks perfect for the geese with already green grass. However there were no geese or swans here although a Grey Wagtail (vintererle) and five Lapwings (vipe) were year ticks. Down on the river by Udenes there was also a lack of water birds lthough I dud hear Great Spotted, Lesser Spotted and Blacks Woodpeckers and had a flyover flock of Waxwings. The water level is very high for the time of year due to the mild and wet winter and the seasonal sand banks were under water. The sand banks are used by the Bean Geese for roosting/resting and without use of them it will be interesting to see what the geese will do. Will they, as they did in the autumn, roost on forest lakes (if they are ice free) or will they not use the area at all? Hopefully the satellite tags will still be working such that we can locate the geese once they come.

With plenty of time available to me I headed for the Hølandselva valley north of Bjørkelangen. Here the spring flood is already happening , a month earlier than usual and with it loads of swans and geese have come. Most exciting was the presence of Bean Geese. First I had a group of 13 fabalis  none of which had neck collars. A few kilometres away amongst many Whooper Swans, Canada and Greylag Geese I had another 14 fabalis and 2 rossicus! Again none of the geese bore neck collars so we can’t know whether these are Scottish birds are not. Along the valley I had in total 296 Whoopers which were very vocal as they displayed, 150 (exactly!) Canada Geese and 54 Greylag Geese alongside the in total 30 Bean Geese. Ducks have yet to really come but amongst a wary flock of 260 Mallards (perhaps indicating a distant origin?) was a male Pintail.

Despite a loaded buffet table I did not have any raptors.

Checking that the original group of fabalis was still present (to avoid double counting) I had a flock of 30 Redpolls, at least one of which had an enormous white rump showing it to be an Arctic (looking at the poor pictures I took it looks like the flock actually contained a number of Artic Redpolls). Could the day get better?

Well actually it could. On the way home I stopped at the small wetland at Merkja which borders the much larger Svellet (part of Nordre Øyeren) and is sandwiched between a railway line, main road and houing estate. Despite this it still attracts birds and I could see 50 odd swans were on the water. I have spent a lot of time previously checking Whooper Swans for the smaller cousin Bewick Swan which I have only seen a couple of times in Norway and have yet to find myself. The easiest way to check is to count each Whooper one-by-one so I set about doing this. After about 10 birds one looked a lot smaller with a lot of black on its bill but I continued my count and once I had my total I returned to bird # 10. It was indeed a Bewick’s!!

I could have chosen a trip to Fredrisktad today for a Caspian Gull which would have been a Norwegian tick but the experience of today including a new self found Norwegian tick was incomparably better.


Maybe I shouldn’t have asked what tomorrow (today) would bring. Snow was not what I had hoped for and completely changed the birding landscape. Per Christian and I repeated our route from yesterday but had much less to show for our efforts. Falling snow and icy temperatures in Maridalen resulted in just 4 Skylarks remaining from all our good birds yesterday although one did sing during a pause in the snow.

At Fornebu we did have the shrike, two Long-tailed Tits (stjertmeis) and a nice encounter with a pair of Bearded Tits (skjeggmeis). We heard them calling in the reeds and made the classic mistake of thinking they were 10-15 metres out. They seemed to move quickly through the reeds and then became quiet. I again heard them calling and tried to locate them. I was looking out into the reeds when I noticed a movement on the ground only 3 metres away. Sure enough it was a Beardie! There was a pair and they kept on the ground at all times and were scuttling around on the path side of the fence. They kept amongst the base of the reeds so were difficult to take pictures of. They called frequently in a very quiet manner and occasionally loudly when they had lost contact with each other but if you didn’t know they were so close you could easily think they were much further out.


Today was a day that fully deserves the use of many experlatives. It was fantastic, it was awesome but most of all it was just GREAT. I had the company of Per Christian which maybe did the trick of perhaps it was the continuing warm weather, southerly winds and low cloud that did but today delivered good birds and really early in the season.

We started in Maridalen where Hawfinches (kjernebiter) showed well on a feeder and then a stop at Kirkeby really delivered the goods. Whilst looking through a flock of Yellowhammers and checking a paler bird we had some Whooper Swans (sangsvane) and Greylag Geese (grågås) flying over south (obviously not quite suitable for them just yet further north). We then heard Skylarks (sanglerke) and a flock flew up from the field – there were at least 19 birds and then a bubbly call announced the presence of Snow Buntings (snøspurv) and a flock of five of these beauties and rare Oslo bird flew up. As if that wasn’t enough a Green Woodpecker (grønnspett) started calling and a Great Spotted Woodpecker (flaggspett) drumming. Migration and spring were upon us!!

As we wandered around the fields a familiar dry call announced the first Mistle Thrush (duetrost) of the year and we had a few other sightings later on culminating in three together. This is exceptionally early – my first Maridalen record last year was 10 April (and the corresponding date for Skylark was 4 April)!!
Continuing around we added little else although a Great Spotted Woodpecker sitting on a wire next to a Mistle Thursh was worthy of a picture if only I had been quick enough. We decided to head for Fornebu but the sight of some thrushes in a tree top prompted us to stop. After checking them out: three Mistle Thrush and three Fieldfare (gråtrost) I scanned the ice covered lake. Four Whooper Swans were resting but behind them was a big black bird – a White-tailed Eagle (havørn)! After a while it flew around the corner and revealed a very white tail with dark tips – most likely meaning it is in its 5th year and not yet adult. We drove to where we thought it had flown but couldn’t find it (although it was refound later on the ice in a bay) but we did find an adult Peregrine Falcon (vandrefalk) sitting in the top of a pine – a Maridalen tick!! This was truly phenomenal.

We eventually did head to Fornebu but with much higher cloud cover it just didn’t have the same exciting feeling about it. Never-the-less 12 Snow Buntings flying over, a few Skylarks, singing Stock Dove (skogdue) and Wood Pigeon (ringdue) and the Great Grey Shrike (varsler) continued the spring feeling.

A stop in town to look at gulls revealed no Caspians (which seem to be turning up everywhere in Norway at the moment) but one young Common Gull (fiskemåke) deserved a prolonged second look but remained as just a Common Gull. As we drove past the Plaza hotel a (the) Peregrine was sitting atop it.

What will tomorrow bring?


With strong southerly winds overnight and continuing this morning I considered a seawatch from Krokstrand but given the time of the year thought I might have more to gain by sticking to Fornebu and Maridalen.
There were no seabirds to see off Fornebu but two Bearded Tits showed themselves in the reedbed and a very early Stock Dove (skogdue) was checking out the nestboxes. I had expected some more migrants here but singing Yellowhammers and Wren were unexpected and early.

A stop at Frognerpark revealed the Iceland Gull (grønlandsmåke) on the lake amongst the Mallards. This bird looks very settled and happy with a diet of bread – exactly as it was last year). It is now in its 2nd winter and has grey mantle feathers coming through, a paler iris and a paler bill than a year ago. The three female Teal which have overwintered were flying around and calling a lot – clearly on the look out for some males.
In Maridalen there is very little snow on the fields and a large amount of open water where the river enters the lake at Hammeren. Here there was a pair of Mute Swans (knoppsvane) and five adult Whoopers Swans (sangsvane) that were calling a lot and displaying. A family party two adult and three young of Whooper Swans flew over looking lost before heading south. The swans were very early but most surprising were two Skylarks (sanglerke) heading north calling.

Spring is over a month earlier than least year (which was exceptionally late) and crocuses are also out in the garden. It will be interesting to see how things progress as I’m sure we will have a spell of cold weather to disrupt things. 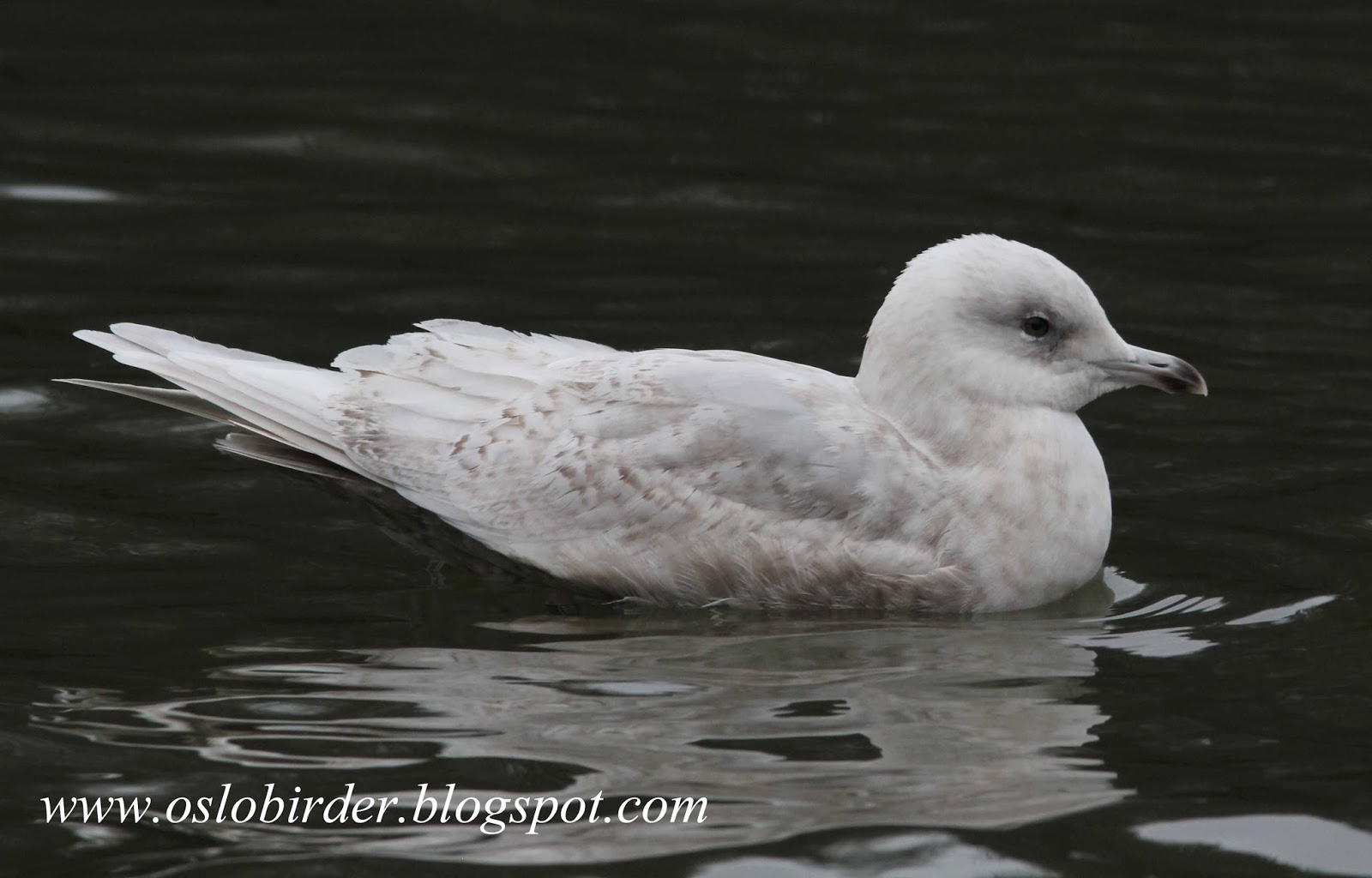 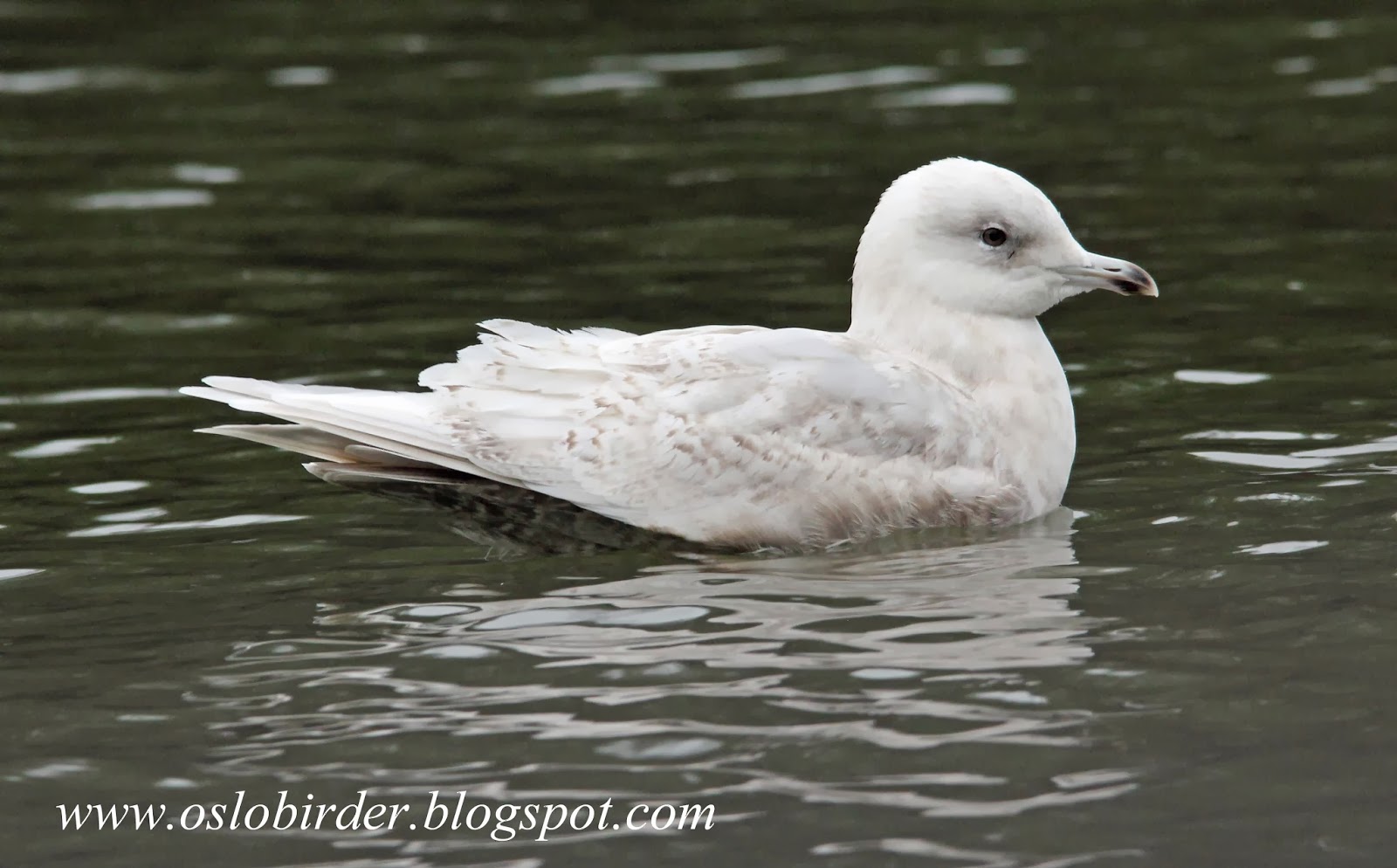 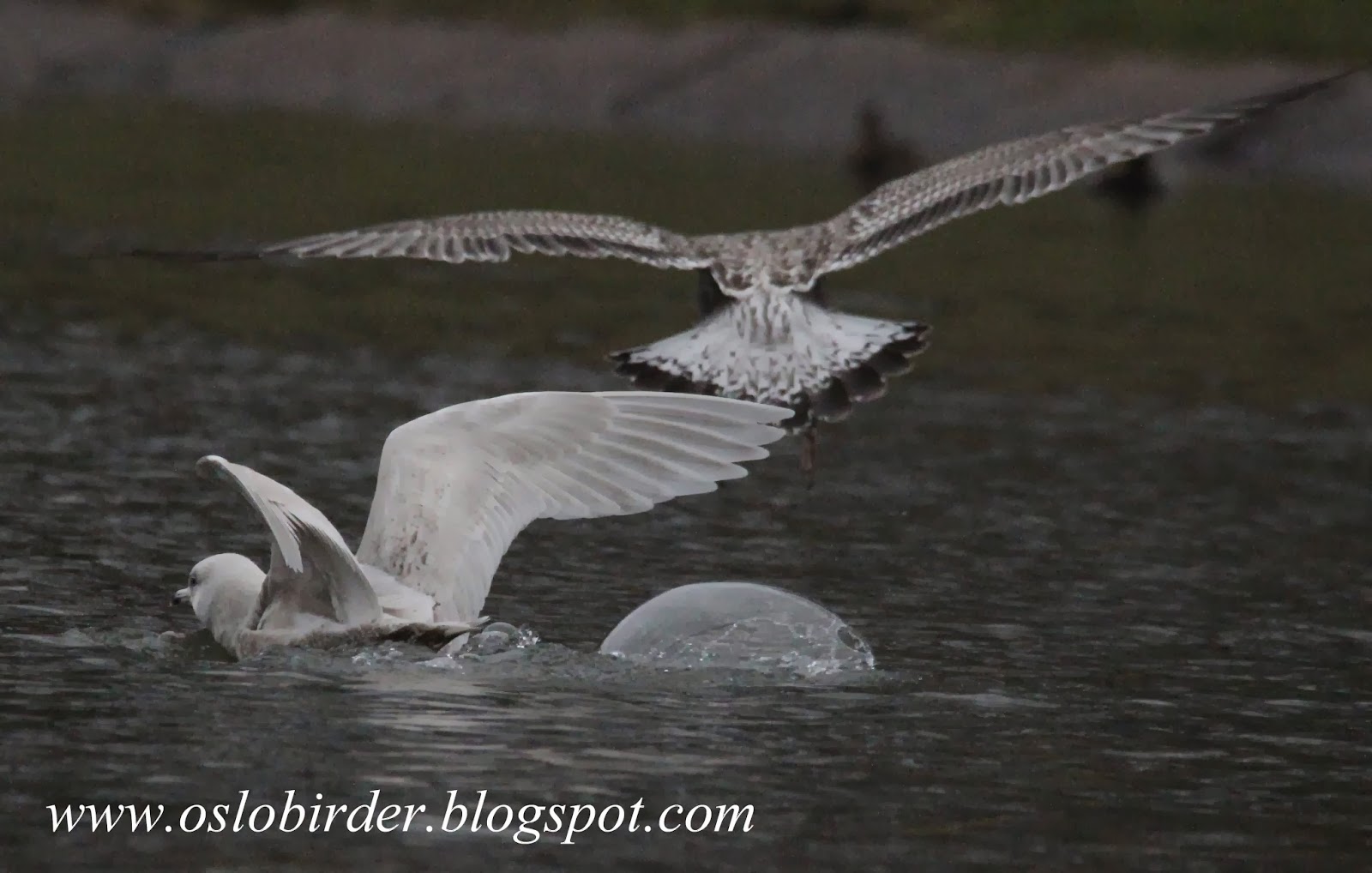