The inner Oslo fjord is now completely frozen over with the ice extending further down the fjord than I can previously remember seeing. This has obviously forced a lot of birds further south but the gulls are still around and I saw the Glaucous Gull again although at a range of around 500m through the scope. I saw the bird from the quay side under the Akershus Festning castle. Also the Peregrine was on the church in central Oslo today serenely surveying the numerous feral pigeons in the area deciding which one would be its dinner.
Lagt inn av rixy kl. 21:07 No comments:

Last week I finally invested in a digital SLR after having previously used a compact camera with a 10X zoom. I've bought a Canon 550D and presently limited my investment in a lens to a Sigma 70-300mm but if I get the hang of things I'll probably buy a good quality 400mm. The improvement in quality of my pictures though is already quite dramatic and here are a few I took today. 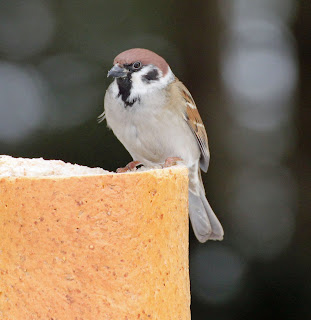 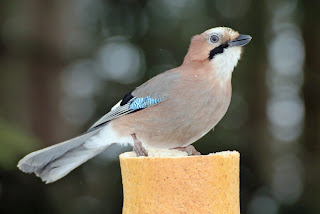 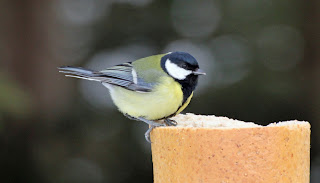 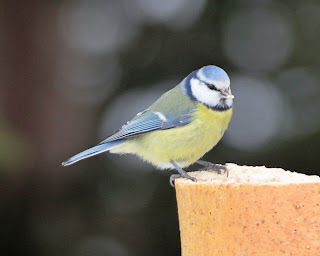 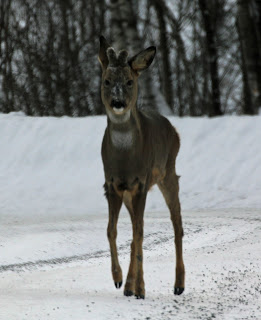 This inquisitive Roe Deer approached me (picture taken through windowscreen)

A wrecked body, frost bite (possibly!) and a TICK 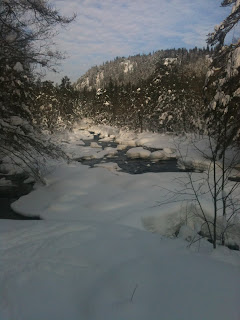 Saturday was a great, if cold, day. It started with my, to date, longest cross country ski over 27km in Nordmarka from Skar in Maridalen to Kikut hut and then to Songsvann. This should have resulted in a few interesting birds but in the end all I noted were a single Crossbill and a couple of Great Tits. There have been reported enormous numbers of Crossbills and great densities in the forests around Oslo with estimates of over a hundred thousand birds - quite how I managed just one is a mystery to me. Maybe it had something to do with the complete mental and physical exhaustion I experienced! 27km is not that far (if you are Norwegian) but was by far my longest ever ski and with my atrocious technique resulted in pain in parts of my body I have never realised could experience pain.

I spent late afternoon and early evening recuperating at home before embarking on the annual owl trip of the local bird club. This involved driving around from 10pm until 3am on snow covered forest tracks in Aurskog Høland (an hours drive from Oslo) stopping the car every kilometre or so and listening. Conditions were supposedly perfect. The time of the year was optimal for singing owls, it was a cloudless night with a near full moon, there are apparently good numbers of mice and voles and it was suitably cold. In fact it was the coldest I have ever experienced with the thermometer in the car recording -25C. The trick to listening to owls is to stand very still and listen - do not move any part of your body and make a noise. This is unfortunately not conducive to staying warm and my toes were still in pain when I awoke this morning and I sure I have frost bite on one toe! So much for my wonderful winter boots.
What about the owls then? Well we did hear Tengmalm's owl which is a tick for me but they were all very distance and a strain to hear. I heard 3 and in total the group heard 6 different birds plus one Pygmy Owl which escaped me. Previous years have recorded over 40 Tengmalm's Owls including very close birds but for whatever reason we did not have the same luck despite the conditions having been announced as being perfect. The area is also home to Wolf and Lynx which have been heard in previous years but these were also silent. We did hear trees "cracking" in the cold which is quite an odd sound and caused by the extreme temperatures causing dead wood to contract.
Lagt inn av rixy kl. 17:19 No comments:

Woke up to -20C this morning and clear blue skies. As the day progressed the sun had some effect and the temperature rose to a barmy -10C although when in the sun it felt quite pleasant. In the garden were upto 15 Tree Sparrows, a couple of Blackbirds, a single Greenfinch and the regular Robin was showing frequently. I managed a brief trip upto Maridalen and the feeding station at Sandermosen. As I wound the window down I could hear Bullfinches calling and quickly realised there were also Hawfinches calling. They did not come down to feed but I could here at least 3 calling in the trees including one singing although I only saw one. Otherwise Willow and Coal Tits and a couple of Great Spotted Woodpeckers. On the way back a group of 4 Elk were crossing the lake in exactly the same place as I saw 4 Roe Deer last weekend.
Lagt inn av rixy kl. 21:05 No comments:


Another trip to Maridalen in significantly warmer temperatures (only zero celcius today) resulted in the female Grey-headed Woodpecker finally giving herself up but it still took a 2 hour wait. She was by far the most wary bird at the feeding station and was only only present for a couple of minutes. She also looked to be in poor condition with the feathers in the vent region being very stained. Never-the-less a great bird and only my second ever sighting.

I will permit myself to also show a video of her feeding. Other birds were the usual suspects: various tits, Jay, Great Spotted Woodpecker, Nuthatch, Treecreeper and Bullfinch.

At home in the kitchen I noticed a rather large movement right outside the windown; an Elk (or Moose if you speak american). It ran around the side of the house and I ran to get the camera, ran to the lounge window, turned the camera on, selected video, pressed play and this was the result....


When these majestic animals come so far into the city then they normally end up being shot as they cannot find their way back to the forest and end up being considered a danger to themselves and to others (us humans). I hope that this isn't the fate for this animal but I fear it's fate is sealed as there seems little hesitation to press the trigger in in these parts. The reason it has ventured so far away from its natural habitat is probably because the changing temperatues of the last week have resulted in a layer of ice making it difficult to dig down for grass (or other vegetation) and thus making it seek food in warmer and more fertile areas.
Lagt inn av rixy kl. 22:34 No comments: