I thought it was best to title this post in an honest way such that nobody starts reading this thinking they’ll find something new only to be disappointed by just finding even more pictures of Bearded Tits!
It’s still snowing and we now have over a metre in the garden. It is not that tempting to be out just now but a bit of fresh air is always a good idea. I chose a quick trip to Fornebu and recorded fifteen birds of four species: seven Waxwing (sidensvans), one Fieldfare (gråtrost), one Magpie (skjære) and unsurprisingly the six Bearded Tits (skjeggmeis).

When I arrived at the reedbed at Koksa I positioned myself where I have been seeing the birds and waited and scanned but could not hear or see anything other than falling snow. I walked the length of the reedbed still having NOTHING but snow and then returned to the spot. A couple of minutes later: “ping, ping” and then after another minute the birds popped up in exactly the same place and then fed high in the reeds just 5 metres away. The bird that was closest was as usual the ringed female which seems to be just that little bit less shy than the others. The birds dropped down to the base of the reeds a few times and each time popped up again a fraction closer. Eventually they were right by the fence only three metres away. I hoped that they would come to the reeds on my side but that was obviously a too greedy wish.

These birds look like they are becoming my new Hawkie but whilst they are scarce and very smart birds they do not compare in the wow factor that Hawkie had last winter.

A new day offers new photo opportunities but basically I think now that the only thing that can improve the pictures is better light and maybe an interesting behavioural feature. I did take some video though which despite being hand held isn’t too bad. I filmed in HD so remember to chose HD in the bottom right corner. 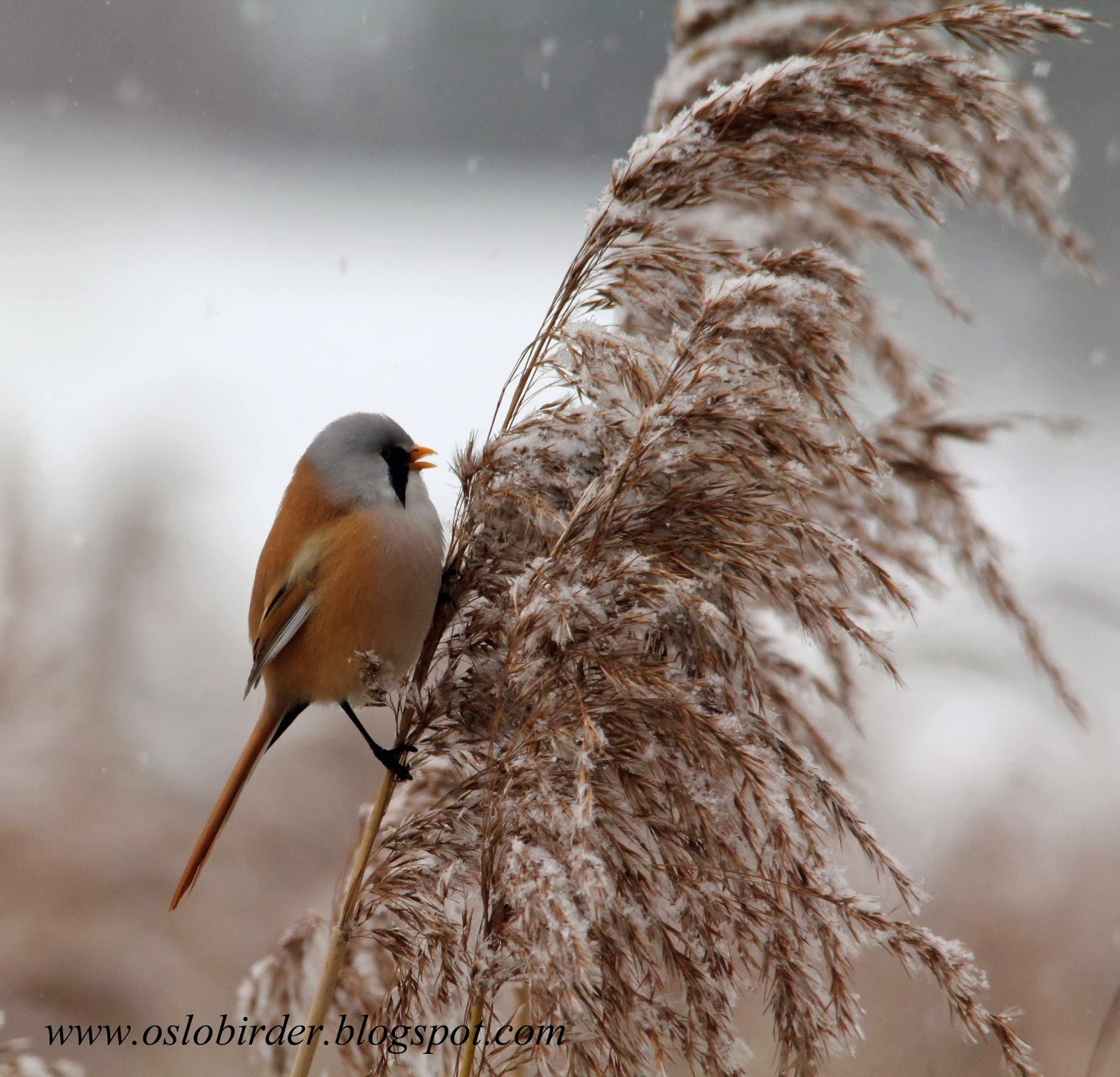 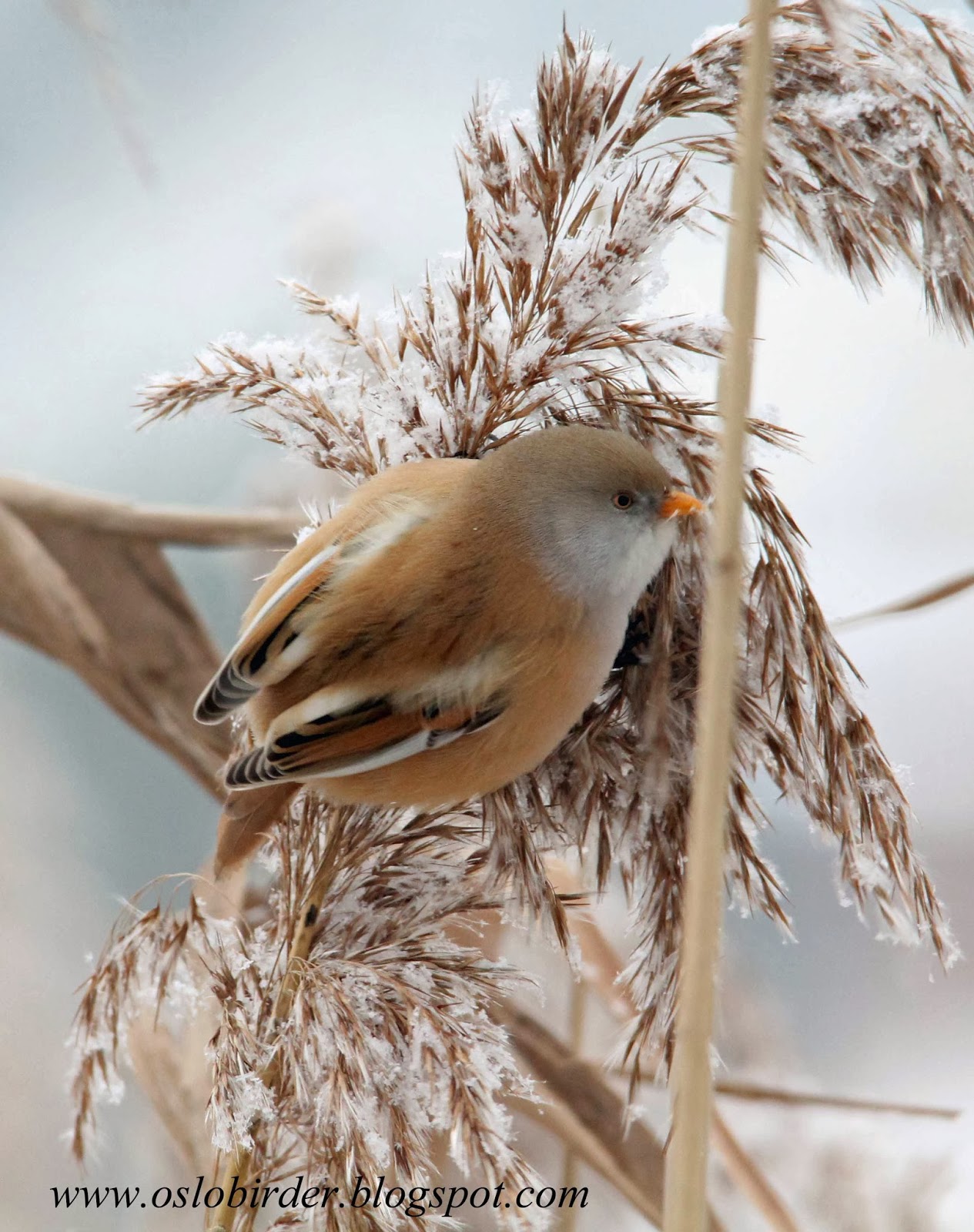 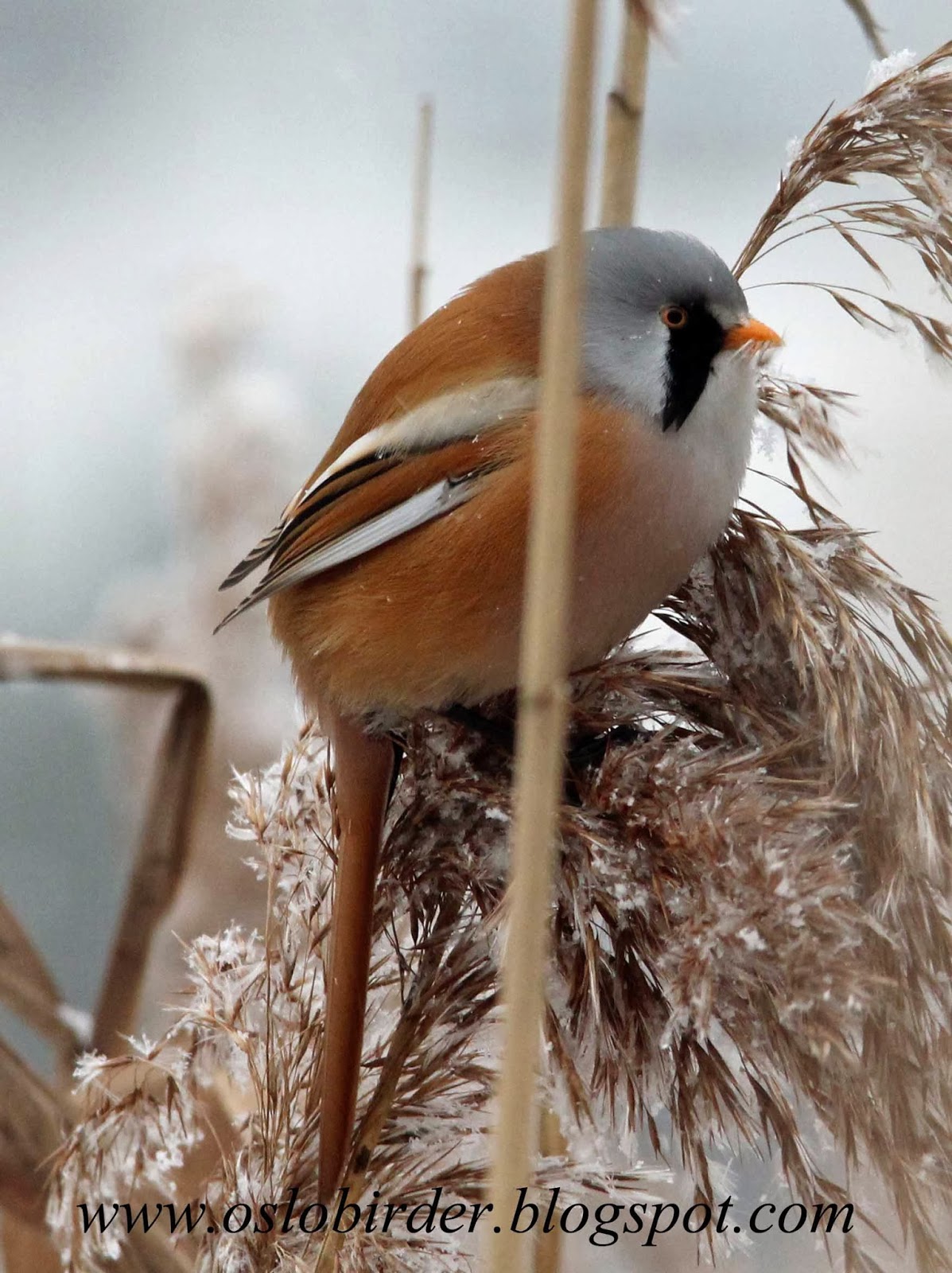 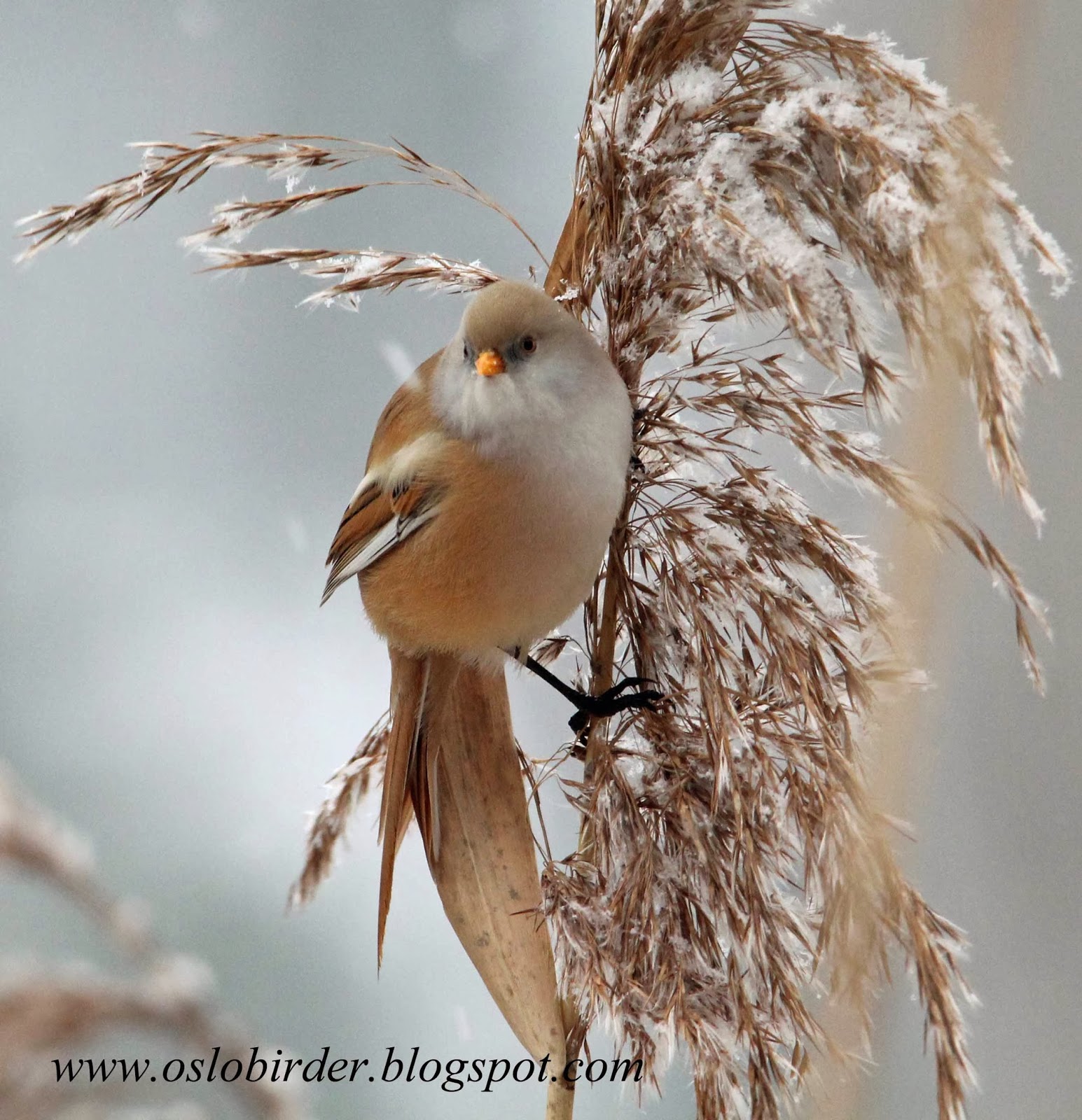 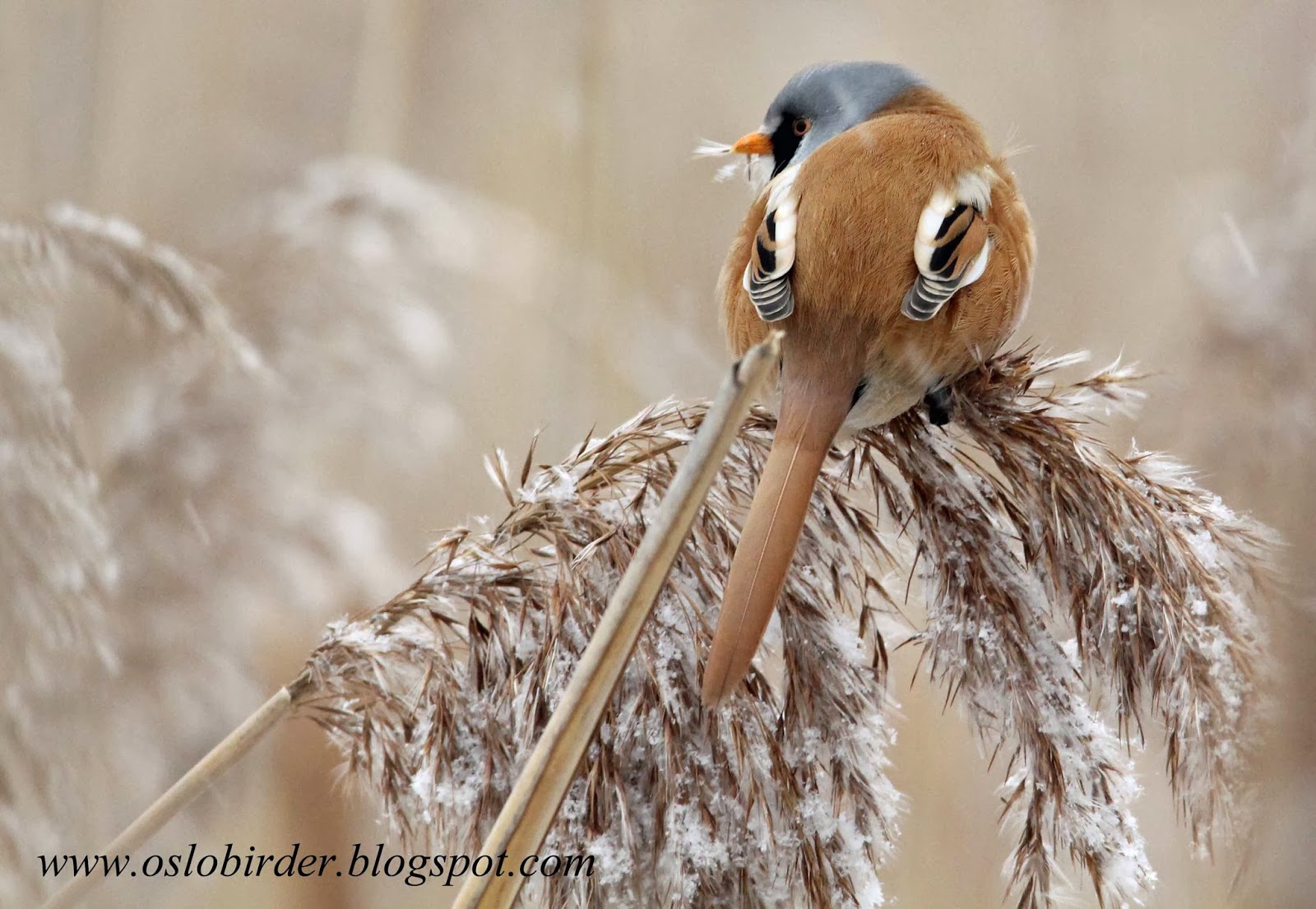 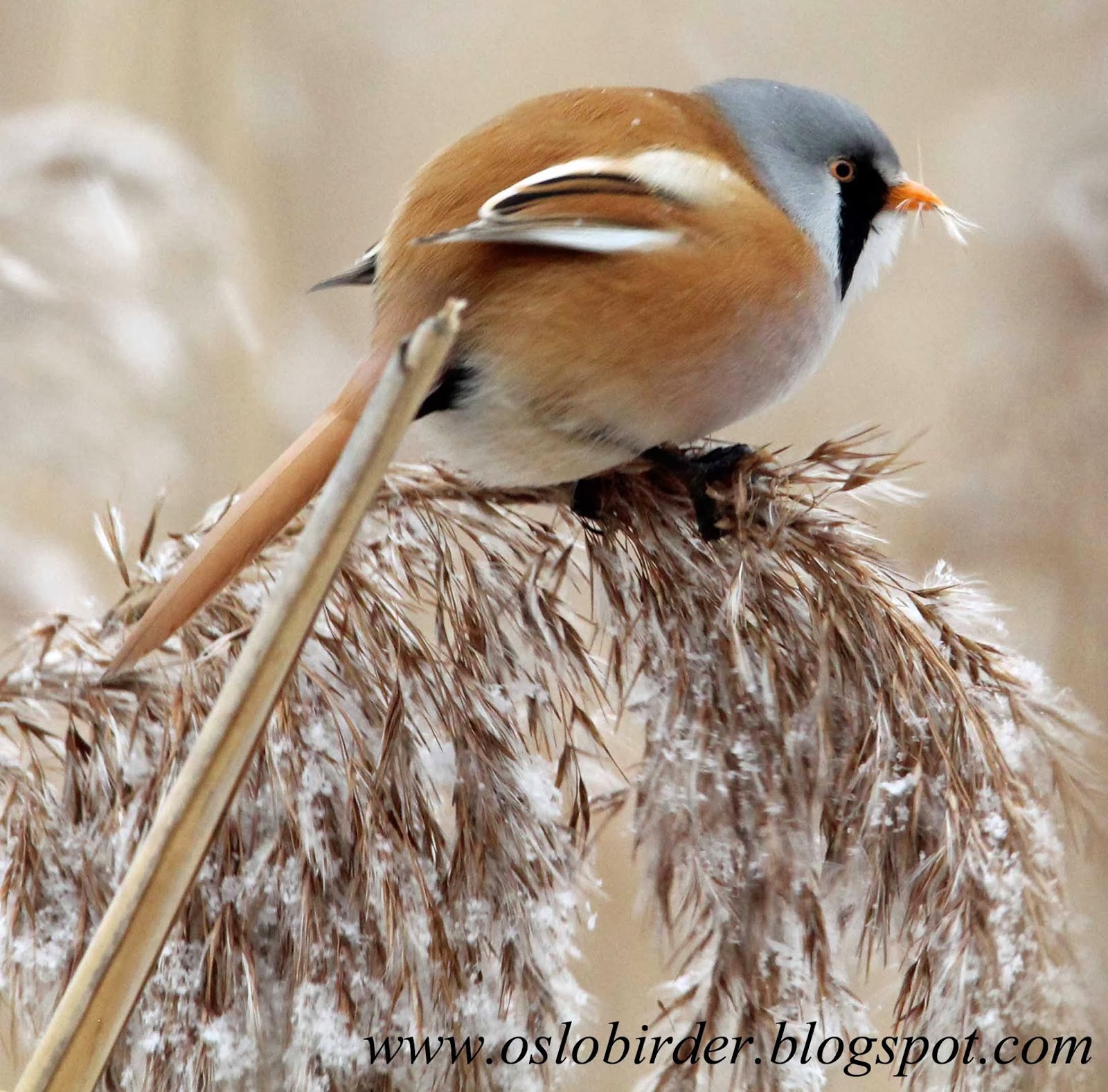 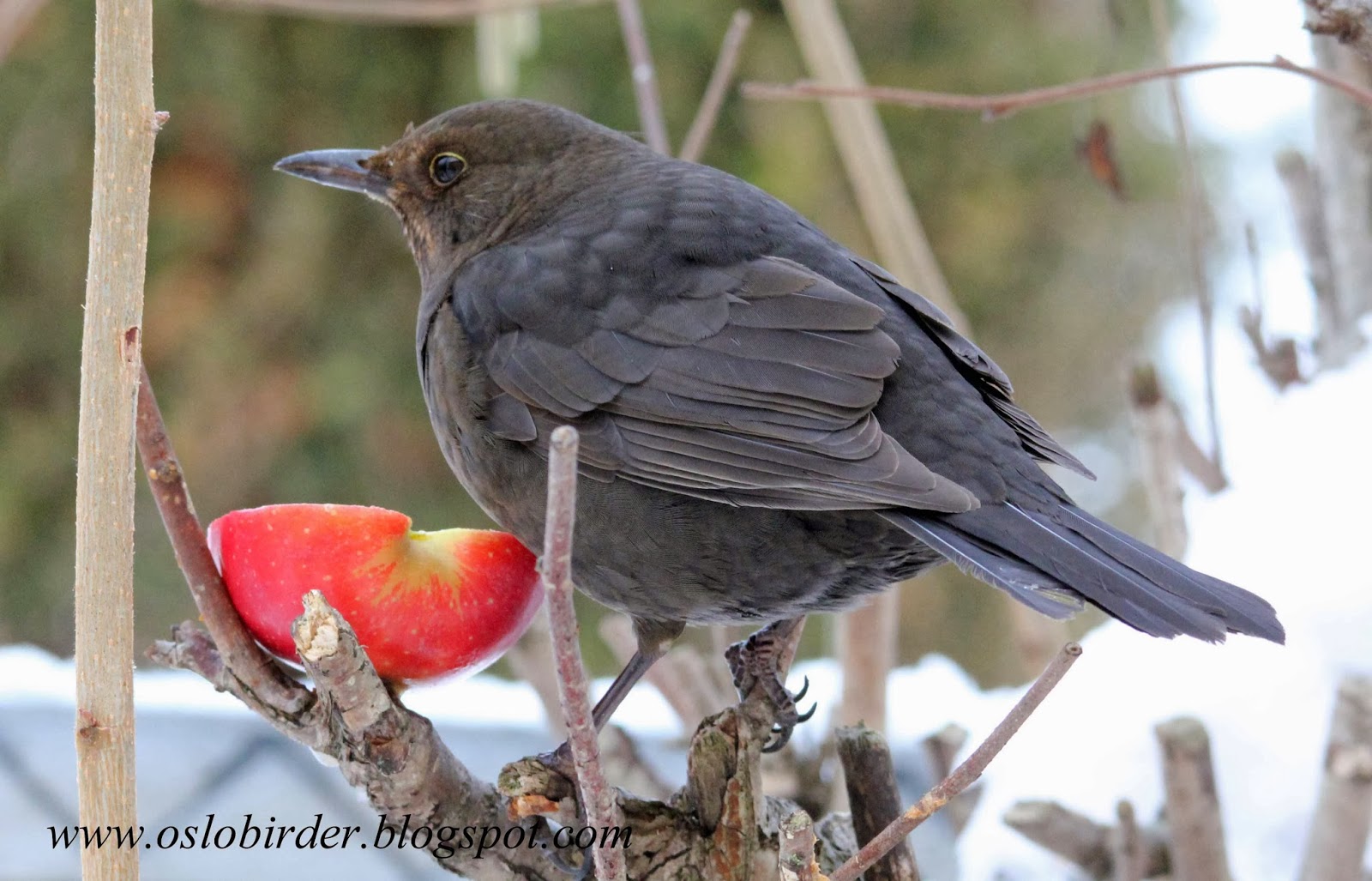 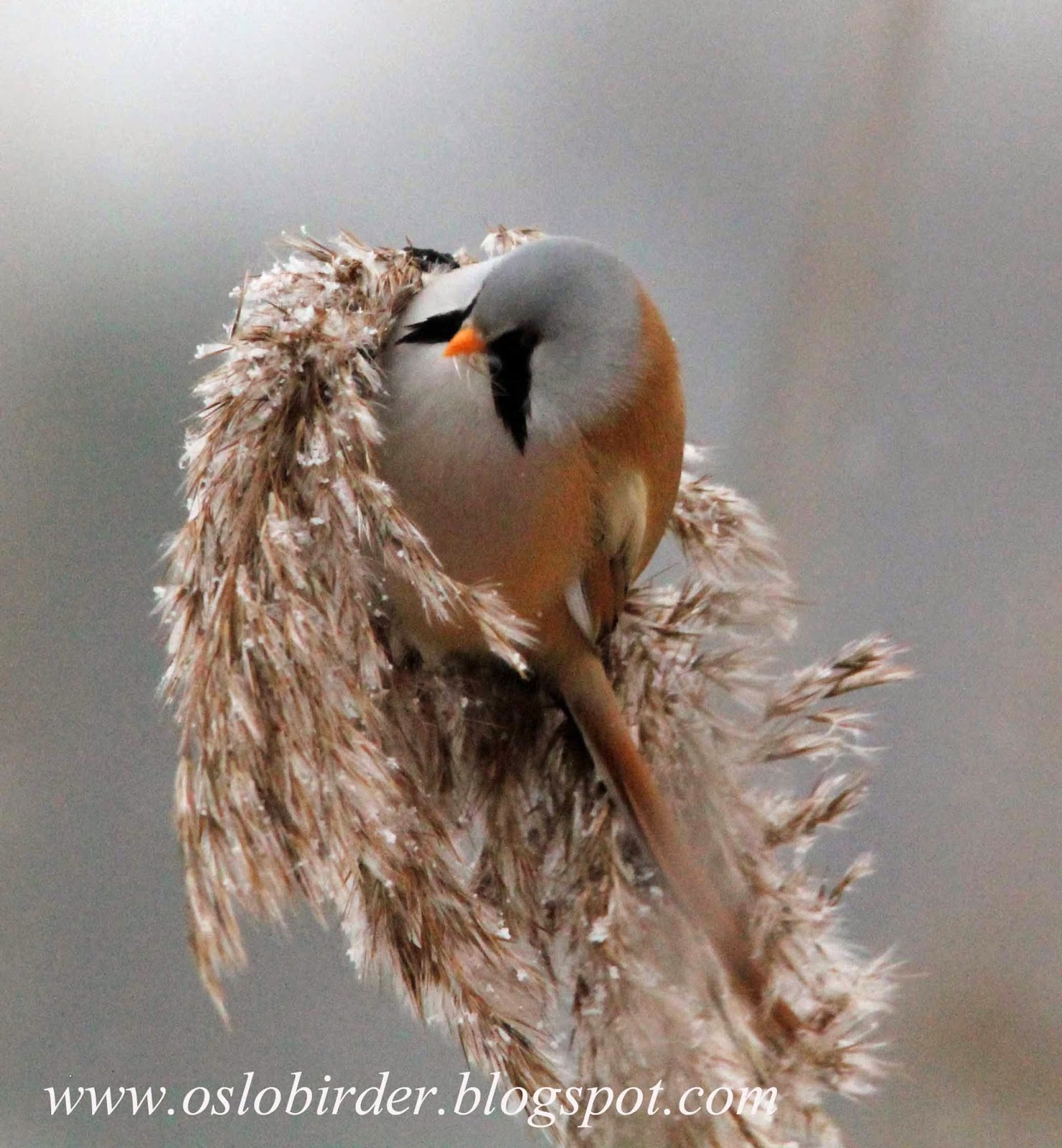 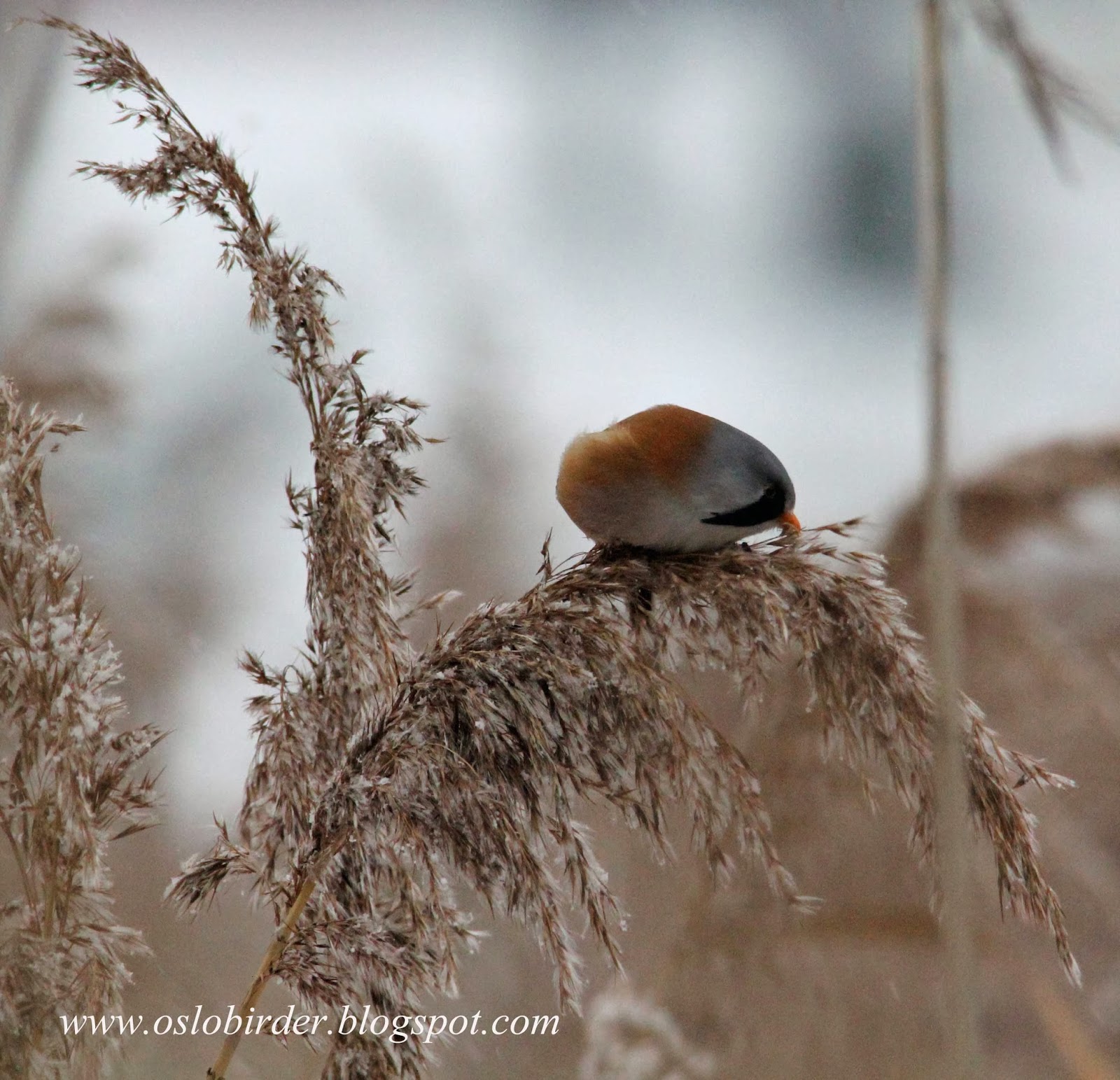 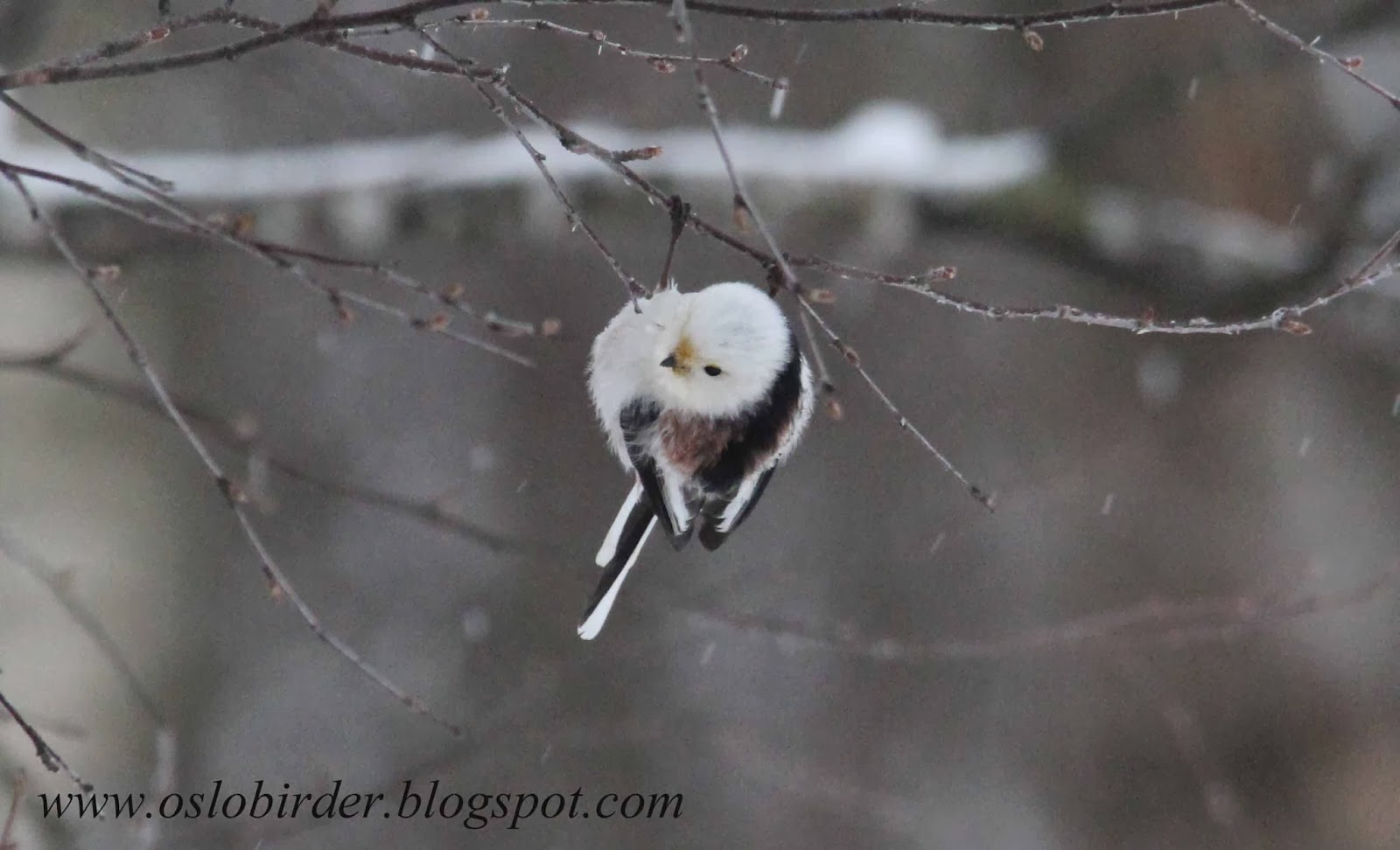 What's all that white stuff?


Last night and this morning it just snowed and snowed and snowed; dry, fluffy snow that blows around a lot and drifts.
Today was therefore a good day to stay in and catch up on admin and article writing. Of course I always had an eye on the garden and also took a trip to the apples tree. The apple tree held seven Waxwings (sidensvans), two Fieldfares (gråtrost), a Blackbird (svarttrost) and the male Blackcap (munk). The Blackcap is quite wary and flies off when someone approaches to within 10 metres of the tree which must be quite tiring for the bird as a path runs right by it but the other birds just sit tight and don’t seem bothered by people walking right underneath them.

In the garden the Robin (rødstrupe) and three Blackbirds are still holding out and four Yellowhammers (gulspurv) and two Bullfinches (dompap) dropped in. Rarest bird of the day though was a Greenfinch (grønnfink). This species used to be regular in the garden all year round but has seen a crash in its numbers recently. It is thought that it is disease that is the cause and Greenfinches are very susceptible to salmonella which they pick up at feeding stations.
Lagt inn av rixy kl. 16:55 No comments:

Email ThisBlogThis!Share to TwitterShare to FacebookShare to Pinterest
Etiketter: Garden


An usual weekend post from me but with 10 minutes to spare between a late, lie-in induced, breakfast and taking the family to the ski slopes I checked out the apple tree. Just four Waxwings (sidensvans) this morning but the Blackcap (munk) was present and allowed me to see it feeding on apples – a fine male which dispelled any thoughts I may have had that the tacking call from yesterday actually belonged to a far rarer warbler. At 0930 on an overcast morning it is still very dark and the pictures bare evidence of this.

Whilst skiing a vole risked its life as it ran across one of the slopes – hopefully a good sign regarding owls this year.