A year for owls

There has been little time for birding recently. I completed the famous Birkebeiner mountain bike ride at the weekend - 94km over the mountains from Rena to Lillehammer in central norway and despite going through fantastic habitat the only bird I noticed was a single Nutcracker. I think I was too focused on the road and trying to ignore the complaints I was receiving from my body to notice anything else.
Great news has just been published of at least 38 breeding pairs of Snowy Owls in northern norway this year. One report I read said it was teeming with them in Finnmark and implied you couldn't miss them. Well Per Christian and I certainly managed to miss them despite some dedicated searching. 14 breeding pairs of Great Grey Owls have also been discovered this year in a relatively small area of Hedmark so the "rodent year" has definitely resulted in good conditions for owls even if I haven't been so lucky.
Maybe as the autumn progresses there will be sightings of owls in unusual places as the young will certainly start wandering. Maybe I can turn up both Snowy and Great Grey Owls in Maridalen?

Another Norwegian tick today in the form of a Black-tailed Godwit (not exactly a rare bird!). The bird was at Presterødkilen in Tønsberg along with 98 Ruff, 2 Curlew Sandpipers, 1 Knot, 1 Little Stint, 7 Dunlin plus Greenshank and Snipe. Along with good numbers of Teal and Greylags it was quite a bird rich environment and took me back to birding in England when one could actually see good numbers of birds quite easily! Also an Osprey and a juv female Peregrine.

At nearby Ilene around a thousand Greylag Geese, the female Ruddy Shelduck, another Curlew Sandpiper plus Dunlin, Ringed Plover, Curlew and Greenshank. The warm, sunny conditions looked perfect for soaring raptors but I only saw single Sparrowhawk and Goshawk.
Lagt inn av rixy kl. 23:25 No comments:

The main feature of today has been the large numbers of Swifts and Swallows/Martins around. A quick trip around Maridalen revealed a group of a couple of hundred Swifts feeding from ground level up to many hundred metres and in amongst them were 50 odd Swallows, 20 odd House Martins and a couple of Sand Martins. At around 9pm a visit to the local shop revealed the entire local population of House Martins flying and chattering over their breeding colony. I believe there to be less than 10 nests in the colony but there was easily in excess of 50 birds in the air. They keep very close to the colony and even though our house is less than 150m from the colony it is surpising how infrequently I note House Martins over the house.

Guillemots at the Opera 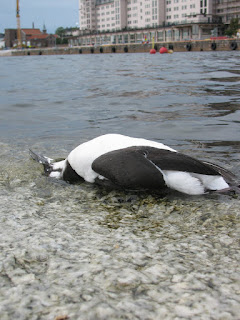 The bird felt still warm and also seemed to have good fat levels so there was no obvious cause of death although the lower mandible was loose so maybe it had hit a boat?? Nearby was a dead juvenile Herring Gull which also had no obvious cause of death.
The Guillemots all appeared to be adults and it is unusual to have them so far in the fjord at this time of year. Presumeably they have had a bad breeding season and little food to find in their usual areas. A few Common Terns were making a lot of noise with young begging for food.

Email ThisBlogThis!Share to TwitterShare to FacebookShare to Pinterest
Etiketter: Guillemot

Still little time for real birding but a bike ride turned up a few surprises. On a lake in Nordmarka where i would expect to see Black-throated Divers I was very surprised to instead discover a pair of Red-throated Divers with a well grown young. The youngster was begging for food and was not full sized including the bill but may well have been able to fly. I can therefore not be sure that they bred on this lake but they could not have come far. Red-throated Divers have not been recorded breeding in these parts before but there have been 3 sightings on Maridalsvannet this summer so this was a sign that they were around. In Maridalen i had flyover Hobby and Buzzard and 46 Greylag were on the lake.
Lagt inn av rixy kl. 20:47 No comments:

Managed some birding today although only a trip to Maridalen and in quite heavy rain showers. There are some thin muddy edges on the lake but no waders except for a couple of Common Sandpipers. Also very little else to see: 5 adult Black-throated Divers in flight over the lake and a single adult Red-throated Diver feeding were interesting to and probably a sign of a poor breeding season due to changing water levels. 2 Ospreys were probably an adult and youngster with the youngster calling and a flock of 9 Teal were most likely migrating birds although could be locally bred as there were a couple of males hanging around through May.
In the crop fields around the lake were small numbers of Whinchat, Tree Pipit, Chaffinch and Reed Bunting and best of all a juvenile Red-backed Shrike which was my first sighting here for the year although others have seen a pair so they have probably bred somewhere in the valley.
Lagt inn av rixy kl. 23:03 No comments:

I haven't managed much birding recently but have been on some bike rides (the 96km Birkebeiner race which has been my goal is only 2 weeks away so i need to get into shape...). Today whilst cycling back through Maridalen a large bird of prey flying over a feed which was being harvested turned out to be a Common Buzzard and not a kite as i had hoped. Otherwise i've seen a couple of Sparrowhawks and a Goshawk which will hopefully recover their numbers with a good breeding season.
Two-barred Crossbills are turning up at many (coastal) sites in Norway at the moment. But none have been reported around Oslo and I have even noted any Common Crossbills recently - they are so nomadic.
Lagt inn av rixy kl. 18:50 No comments:

Time for a trip to Tønsberg to catch up with some wildfowl that have been kicking around for a while. A couple are probably plastic but one was most likely the real deal.
First stop was Presterødkilen where the water level was very high meaning that conditions were not ideal for waders but there were plenty of ducks and geese. Amongst many hundred Greylag Geese the first plastic tick stood out: a pristine white adult Snow Goose. It is difficult to get too excited about a bird like this but it was a year tick (I have seen them many times previously in Norway, both the now extinct feral population in the Oslo fjord and a pair migrating with Barnacle Geese that were also seen on Svalbard. The wise men who anonamously sit behind Feltornitologene.no will not however allow me to have it on my list. They also refuse to let me have Bar-headed Goose which they include on the norwegian list - I cannot see how anyone can suggest that any of the norwegian records have been genuine asian migrants so I've no idea why the birds I have seen can be rejected. Whinge finished.)
Amongst the many Teal and Mallard I picked out the long staying Black Duck (another year tick) and there were a handful of Ruff and Greenshank around the edges.
My main target was eluding me though and as this was most unlikely to have jumped a fence I needed to keep searching. I drove to the south and found a flock of moulting Eider and there amongst them was my quarry. First found by Per Christian on 2 July - a fine male Surf Scoter. The views were not great as I had to contend with heat haze at 50x magnification. The bird was in moult and lacked the white on the nape which from what I can see from the literature is a very brief occurence.
With a norwegian tick under the belt it was time to drive up the rode to Ilene and get another slightly more plastic one. The Ruddy Shelduck stood out like a sore thumb amongst another multi-hundred strong flock of Greylags. I guess this could be genuine as there is a belief now that wild birds from south east europe erupt to the north west but I guess we will never know. Still it's as good as they will ever get in Norway. Not too much else here except Greenshank and Redshank.
On the way back to Oslo a stop at Møringa by Horten revealed just a couple of Dunlin of any interest and a stop at Sandebukta where a Black Tern had been seen on Saturday turned up a blnak.

A trip to Fornebu in the rain yesterday didn't reveal any big surprises although a Honey Buzzard over was nice and 3 immature Red-backed Shrikes were a sign of succesful local breeding. A few waders were present including 5 Snipe that were unusually visible as they fed in the open and a handful of Wood Sandpipers and Greenshank.

A trip to Årnestangen today was not as bird rich as I hoped due to high water which was approaching flood levels. Still there were a few birds to see including 4 Ospreys, a Hobby hunting dragonflies and 11 Little Gulls feeding at very long range amonst a feeding flock of around 200 Mute Swans. I recordef a few waders but most were flying over including 2 Grey Plovers, a Ringed Plover and a Dunlin.
Lagt inn av rixy kl. 21:13 No comments:

The one that got away

Whilst making a rather tasty (if i am permitted to rate my own cooking) pavlova for my youngests birthday i received an SMS from Per Christian saying he had found a Greenish Warbler at Fornebu. As guests were due to arrive in 2 hours i wrote off any chance of getting down there but Mrs Oslo Birder told me to go but be quick (familiar words). 15 minutes later I was there but despite an hours searching with PC and Bjørn Olav we could not relocate it. It was REALLY hot there but many Willow Warblers were flitting about and calling and a pair of Ringed Plovers had young.
Full respect and deserved reward to PC for birding at Fornebu in such hot weather when the rest of the population was looking for shade or and an ice cream.
Lagt inn av rixy kl. 16:56 No comments: