I answered one of my questions regarding the Three-toed Peckers today with their absence meaning that they were just birds moving around looking for either for a mate and/or a breeding territory. My time in Maridalen was not wasted though with my first Redstarts and Pied Flycatchers of the year including birds singing and on the edge of the still frozen lake my first Common Sandpiper. The ice is now in the process of breaking up and is drifting around a bit. Rain is forecast tomorrow which will hopefully mean the end of the ice and also a fall of birds although temperatures of only 2C and NE winds do not promise too much.

In the afternoon I had a group of all three hirundines together in Maridalen but they were moving rapidly around and I imagine not finding much food. A Wood Sandpiper also looked a bit forlorn. 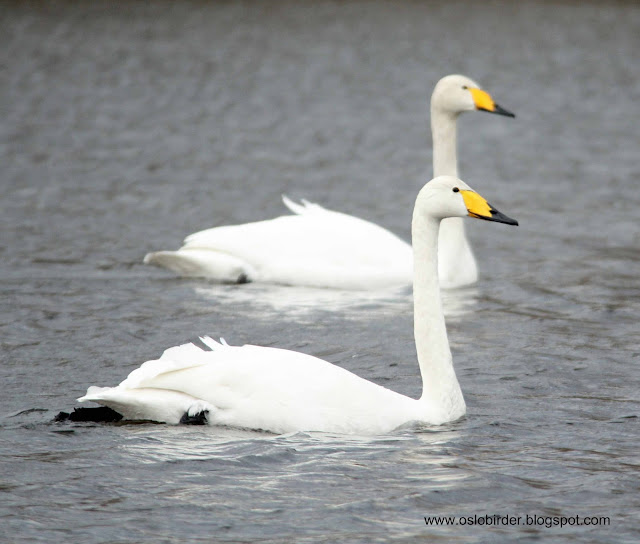 Up at 5am this morning and 4 glorious hours in Maridalen before breakfast was a fantastic, if not particularly bird rich, start to today.

The first good bird was before I even left the house when I heard the croaking of a Red-throated Diver flying over the house whilst I was sitting on the loo! What was quite possibly the same bird was flying many circuits of Maridalen when I got there and seemed to be very annoyed that the lake was still frozen. A heavy overnight frost meant that the temperature was -2C at 0520 and all the edges of the lake had frozen over again.

Migration was pretty much non-existent except for a single Curlew (I had hoped for Whimbrel) and also a few gulls heading north. So I had no new birds for the year and instead concentrated on finding breeding species.

On the main island in the lake 2 pairs of Barnacle Geese seemed to be vying for ownership of the island although I suspect that the Mute Swan pair that was also there will win that fight should they decide to breed. A stop to listen into the forest east of Maridalen revealed a singing Black Grouse but no woodpeckers. Woodpeckers did reveal themselves other places though with a couple of Green and many drumming Great Spotted. The biggest surprise though was when I heard the drumming of Three-toed from an area I had always hoped would house one. After a lot of work I eventually confirmed that there were two birds drumming close to each other plus a Great Spot. It also looked like both the Three-toes were females but I will try to confirm that later in the week as I onnly saw one bird well at close range. After this I was able to enjoy the growing warmth of the sun and the sound of 100’s of frogs croaking and swimming in an enormous lake of spawn. I also found Whooper Swans on the nest, had drumming Common Snipe, displaying Green Sandpipers, singing Tree Pipits, Willow Warblers, Blackcaps and Chiffchaff and a male Kestrel catching and ripping the head off a mouse.

So, there may not have been anything too rare and the wonders of migration evaded me but Maridalen delivered the goods as always. 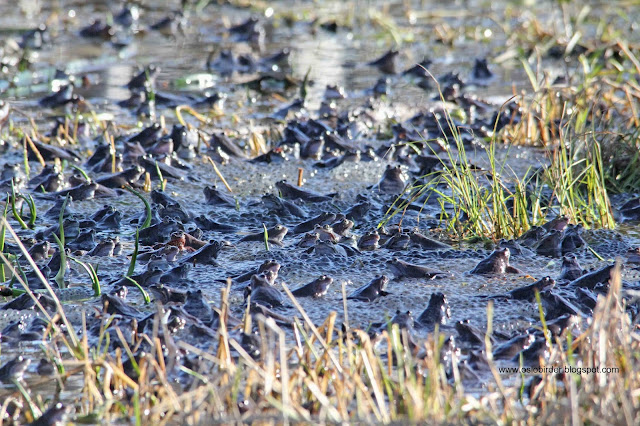 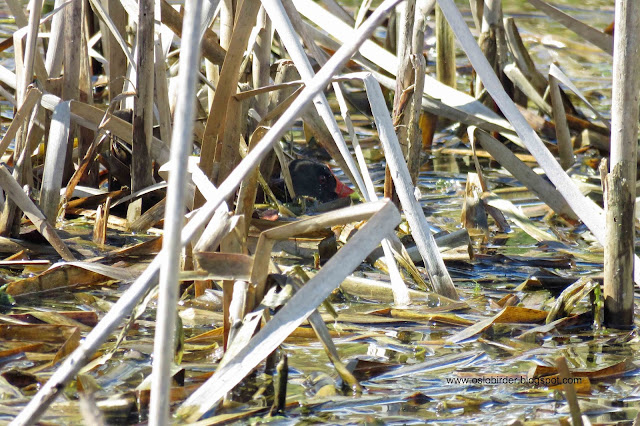 We are experiencing the usual late April lull at the moment although I must admit it surprises and disappoints me every year. Yesterday I walked out to the end of Årnestangen in sunny weather and had to contend with hear haze plus water levels that are far too high. There were still over 1000 Teal but it was only possible to grill a small minority of them and a single Gadwall and 4 Pintail were the best I could find. Lots of Ospreys are now back - I had at least 6 birds but migrating raptors were represented by a male Hen Harrier and two Peregrines.

In Maridalen it was frogs and adders that were the main excitement although a pair of Cranes on the deck and still there today might be the pair that last year looked like it was trying to establish itself in the area - maybe they will succeed this year. A male Red-breasted Merganser was also a rare (less than annual) sighting.

Today had no new birds to offer. At Fornebu the Water Rail was again actively singing and I had the superzoom ready to film. And I had a brilliant frame filling 10 second sequence if it singing but only when I went to stop the filming did I realise that I had not manage to press record.....! I did manage some other sequences but nothing like the one I didn't record.

An overnight frost meant that small pools had a layer of ice at 0830 this morning and it also helped slow down the de-icing of the main lake which is still 99% frozen but the open areas are growing rapidly. I can remember large parts of the lake still being frozen on 1 May in previous years but suspect that this year will be a bit special.

Cold nights and little cloud are not conducive for many new grounded migrants and Maridalen and Fornebu had little new to offer today although a Lesser Whitethroat at Fornebu was a year tick and a singing Blackcap was the first I have heard. Highlight here was undoubtedly seeing a Water Rail “singing” in the freshly cleared reedbed. The intensity of its singing suggests it is unpaired so far.

In Maridalen I was witness to lots of interesting swan behaviour. First, I had a group of 4 young Whooper Swans and two adults on one open area of water. The youngsters were together but not with the adults. I thought that the birds might be the Maridalen breeding pair and some of last years young but when I saw one of the youngsters aggressively chasing the adults and the adults not fighting back I reappraised that view and assumed that the adults were a visiting pair although the youngsters may well be locally bred. A short time later at the other side of the lake I heard a lot of Whooper Swan noise and then saw a pair of Whooper Swan attacking the pair of Mute Swans that has been around for about a week. That a pair of Mute Swans has hung around so long in spring suggests that they are thinking of establishing themselves here (Mutes have not bred here before and the female in the pair at least is clearly a 3cy bird and a first-time breeder). The local breeding pair of Whoopers is clearly not happy to be sharing “their” area of open water and really went at the Mutes. One of the Mutes fled on a couple of occasions although returned to its mate that seemed to be receiving less abuse and even called a bit. Later in the day I saw no swans at all on the main lake although the breeding pair of Whoopers was back on their breeding pool. 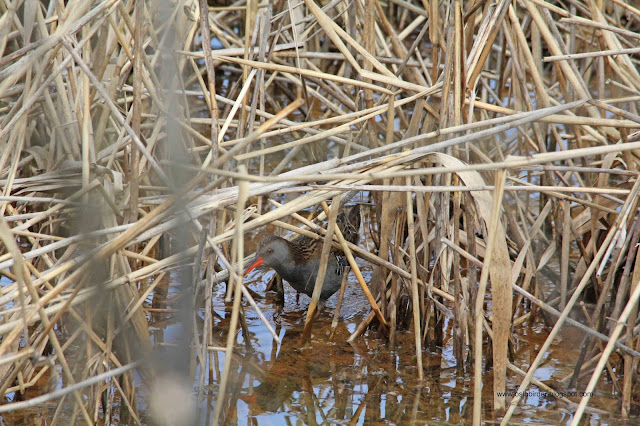 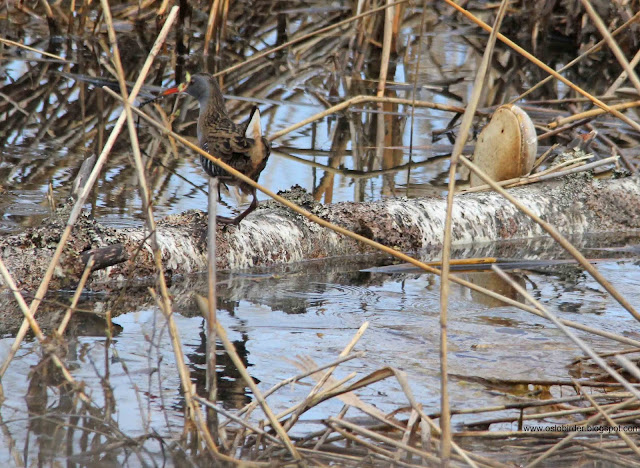 This video of the Water Rail was taken handholding the bazooka so there is a lot of shake.... : 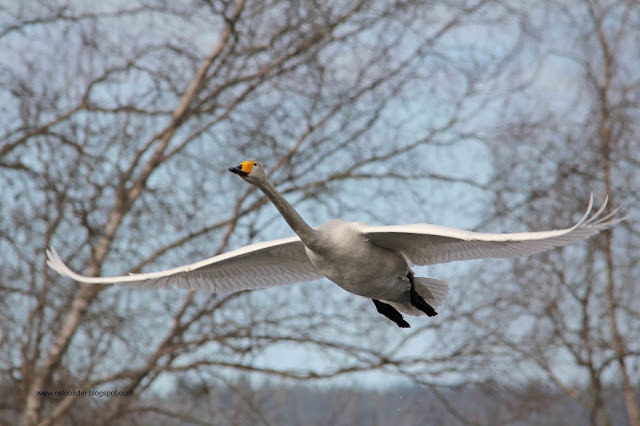 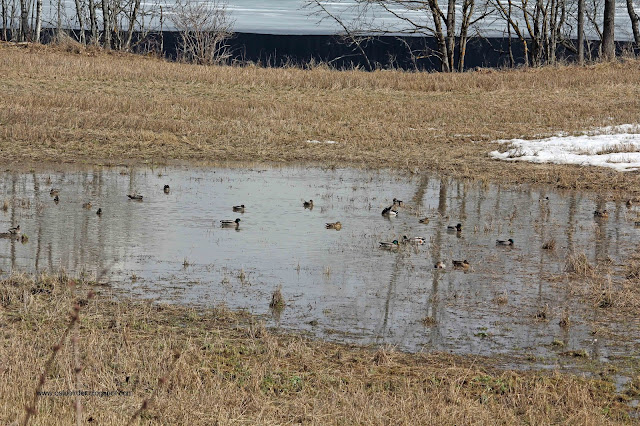 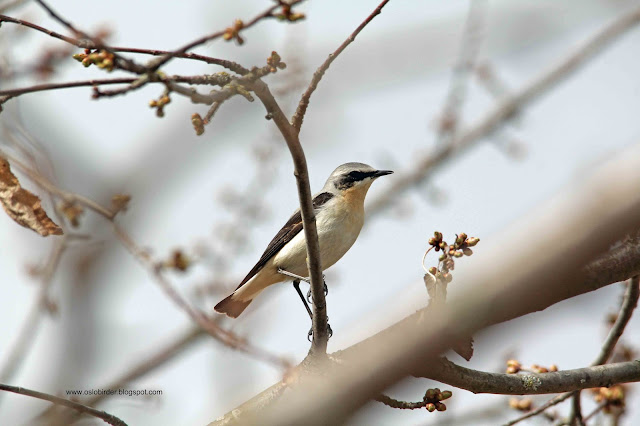 Black-throated Divers back in the Dale

It's all getting a bit too busy for blogging! The end of April is always my favourite time and at the moment it is the movement of Teal and other dabbling ducks that is occupying me with the never-ending searching for something rare in their midst.
Yesterday I was at Nordre Øyeren. At this time of the year it is usually the mighty Svellet where all the action is but the very abrupt end of winter over the last two weeks has caused a surge of melt water with water levels rising 45cm over the last 3 days and being now 60cm over normal levels. This means Svellet has gone from being iced over to immediately being flooded so conditions are pants. There is a chance that water levels will fall again before the melt waters from the mountains start coming but all predictions are for serious flooding this spring. The only area with any mud showing is in Snekkervika and at the tip of Årnestangen. Fog and rain (which came too late in the morning to force birds down) made viewing tricky but amongst at least 2000 Teal I found a pair of Garganey, a pair of Shoveler, a male Gadwall, 6 Pintail and a 100 odd Wigeon so it was only a yank that was missing.

Wader passage hasn’t really started but there were 40 Curlew, 7 Ringed Plover and a couple of LRPs; things will be very different in a little over a weeks time.

Today I did the tour de Aurskog-Høland. Here there is if anything too much flooding but conditions will be perfect once the floods subside. There were lots of Teal to be seen here as well but I found nothing of note amongst them despite grilling every single one!
I had Marsh Harriers at three localities including a nest building male, a pair of Smew at Hellesjøvannet, my first House Martins of the year and also some waders. A few Greenshank were to be expected alongside many Green Sandpipers but two Wood Sandpipers were early and deserved to be grilled properly (this is a real stringers species and the vast majority of April records (or at least 99% of those before 20 April) will be Green Sandpipers – the earliest record ever documented with a photo in Artsobs is 23 April.

At Fornebu yesterday I caught up with a couple of Shore Larks that have been there for a while plus saw a ringed Ringed Plover (in addition to 6 unringed Ringed Plovers and a Little Ringed Plover) that had been ringed 2.8.2017 further south in Norway. My sighting of will I hope in someway help justify the rather obscene bling it has had to carry.

In Maridalen, Willow Warblers and Black-throated Divers have arrived and there are a few Ring Ouzels on the fields and Teal on floodwater. 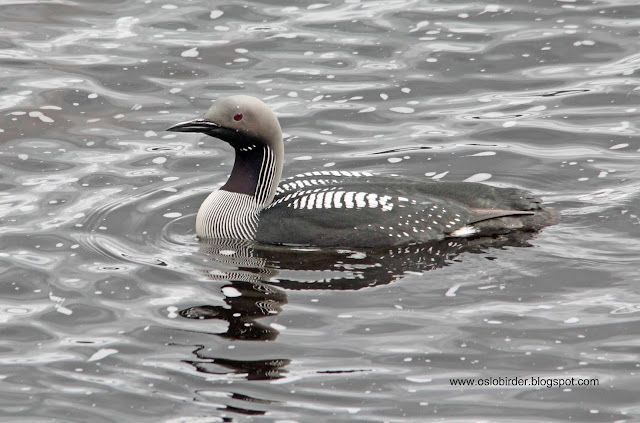 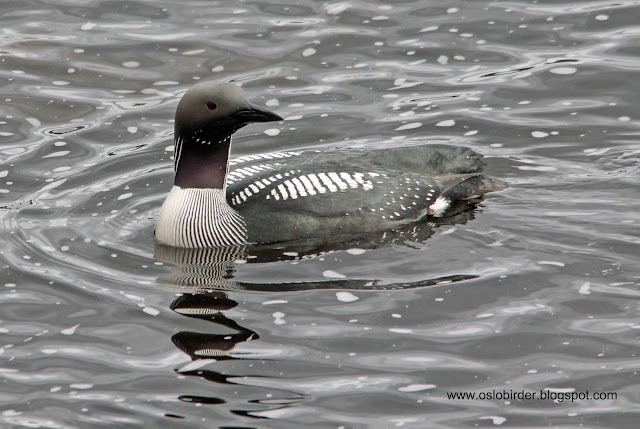 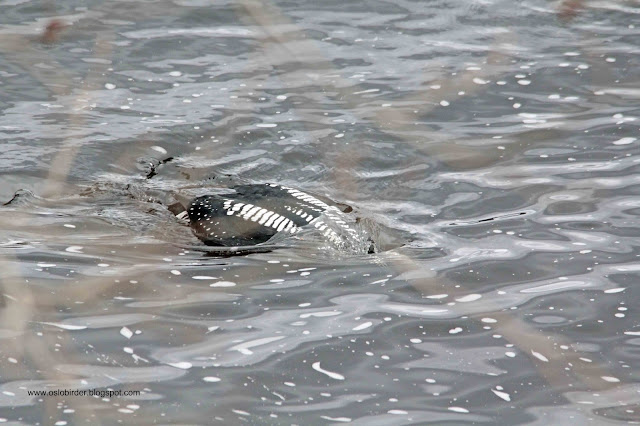 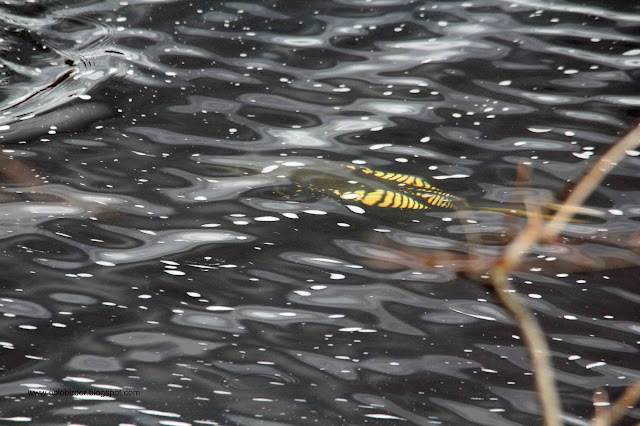