Summer holidays have started. We have been enjoying a new heat wave close to Oslo. Birding wise the highlights have been a nocturnal outing which gave me an incredible count of 11 singing Quail in a very small area (it wouldn’t surprise me if this is a Norwegian record). I even saw one as it jumped up in the short crop to get its bearings! I have also found Red-backed Shrikes at three locations which was a bit of a relief as I have had so few other sightings so far this year.
Most of my attention has been on butterflies (sommerfugl in Norwegian which translates as summer birds) though and this year seems to be exceptionally good with the hot, dry weather having allowed a lot of adults to survive and perhaps most importantly show themselves. Many species have also been on the wing much earlier than the books say they should be.
During the course of the week I have seen at least 21 species of butterfly including:
1.    Large Skipper /engsmyger (photo)
2.    Large White / stor kålsommerfugl (photo)
3.    Green-veined White/rapssommerfugl
4.    Brimstone / sitronsommerfugl (photo)
5.    Silver-studded Blue/argusblåvinge plus probably some other blues that I never got to grips with (photo)
6.    Scarce Copper/oransjegullvinge (photo)
7.    Purple hairstreak / eikestjertvinge (photo)
8.    Silver washed fritillary / keiserkåpe (photo)
9.    Dark Green Fritillary /aglajperlemorvinge (photo)
10. High Brown Fritillary /adippeperlemorvinge (photo)
11. Queen of Spain Fritillary / sølvkåpe (photo)
12. Lesser Marbled Fritillary/engperlemorvinge (photo)
13. Small Pearl-bordered Fritillary /brunflekket perlemorvinge (photo)
14. Red Admiral / admiral
15. Small Tortoiseshell / neslesommerfugl (photo)
16. Poplar Admiral/ospesommerfugl
17. Northern Wall Brown /Bergringvinge (photo)
18. Pearly Heath /perleringvinge (photo)
19. Small Heath / engringvinge
20. Ringlet /gullrinvinge (photo)
21. Arran Brown /fløyelsringvinge (photo)

Day 4 of my guiding of Lotti and Detlef on Thursday was in Maridalen. The Three-toed Woodpeckers showed impeccably well but we then had a great disappointment when I discovered that the Red-breasted Flycatcher nest had fallen down. Whether it was a predator (squirrel or Great Spotted Woodpecker) or the wind is unknown but there was no trace of any remains of eggs or young to be found and no adult birds made their presence known to us.
Today a quick visit to the nest area revealed the male whose behaviour suggested that the female may well have been sitting on a new clutch somewhere nearby but only time will tell if they have made a new breeding attempt.

Here are my pictures and video from this week. There are some pretty good birds in the video although the weather and hand holding (including of the bazooka after the battery went flat on the superzoom) have left their mark. 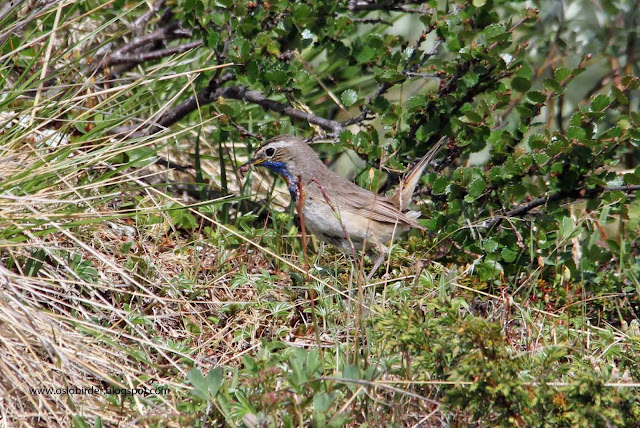 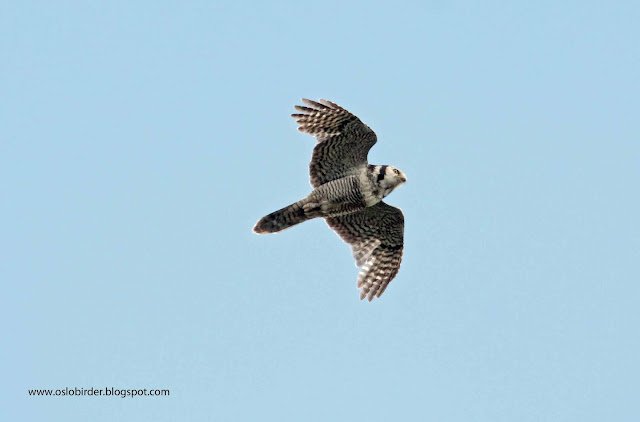 From Oppland to Hedmark

Day 3 guiding Lotti and Detlef from Switzerland had us leave Oppland and take in the Hedmark highlights. This being Norway, what looks like a short journey actually takes ages as you navigate winding roads that take you from one valley to the next and meander around lakes but the rewards make it all worthwhile: Great Grey Owl, Hawk Owl and Ortolan all performed as ordered :-)

The guiding finishes tomorrow in Maridalen where I have of course saved the best until last!

The batteries of both my cameras went flat today but I have a lot of pictures and film to show of Southern Norway's star birds. Just need to find time to go through them...
Lagt inn av rixy kl. 20:15 No comments:

Today's weather made yesterday's look positively cosy. We had snow, temperatures down to 3C, storm force winds (more than 25m/s), saw a mini tornado sucking up water over a lake but also had amazing blue skies and rainbows.
Despite this I was able to find birds and we had great views of Siberian Jay, Bluethroat, Lapland Bunting, Yellow Wagtail, Merlin, Kestrel, Black-throated Diver, male Bramblings, Willow Tit and Crested Tit amongst others.

The Siberian Jay was especially pleasing as this is never an easy bird to find and as usual after the hard work of finding it was done then it showed really well.

One worrying thing from this visit and also last weeks is the very low numbers of waders. Just one sighting of Redshank and two of Golden Plover is a crisis for these species which I would normally expect to see in many locations.

One FJELL of a day

I am guiding up in Beitostølen again and battling against the elements. Yesterday in temperatures down to 5C and rain and fog we saw FJELLjo, FJELLlerke, FJELLrype and FJELLvåk aka Long-tailed Skua, Shore Lark, Ptarmigan and Rough-legged Buzzard. You have probably already guessed but fjell is Norwegian for mountain and the mountains also gave us Dotterel. We therefore scored with all the target species and at close range although the weather made photography a tad problematic.

Then in the evening after having watched England win their first of what will be seven consecutive victories in Russia we visited my Great Snipe lek where we had great views in good light of a displaying male. The bird was very active from 10:30pm and showed really well but it was strange and worrying that it was just one bird. Also here we had Woodcock, Cuckoo and a Short-eared Owl.

I have lots of video to upload once I get home but very foolishy did not bring my battery charger so have to hope there is not too much action over the next two days... 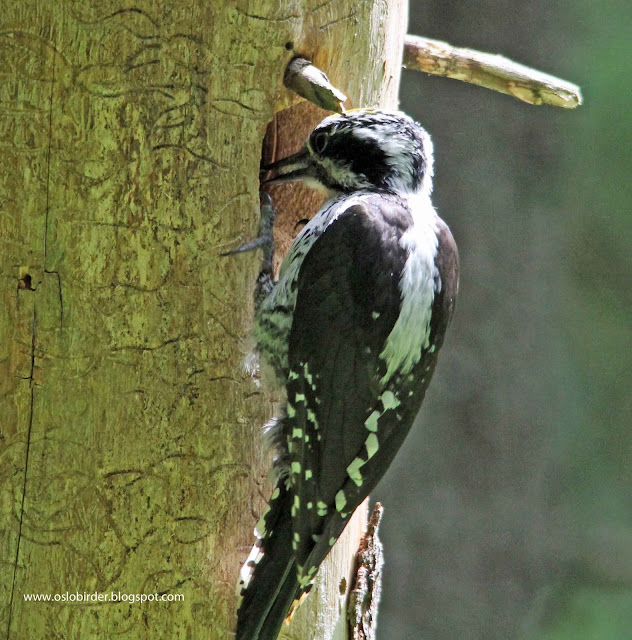 The last two days I have been guiding Kathy and Mike from Oregon. After a stop to see Maridalen’s highlights we headed off to find the best that Oppland County has to offer around Beitostølen and Valdresflya. We had to contend with a day of heavy rain and strong winds on Thursday but despite this had a very enjoyable and successful trip.

Highlights were many but good views of a Blyth’s Reed Warbler on the way up (a, for once, successful twitch), lekking Great Snipes, Dotterel, Long-tailed Skua, Purple Sandpiper, Lapland Bunting, Bluethroat, Rough-legged Buzzard and Red-breasted Flycatcher were stand outs.

I took few photos due to the bad weather and also because I was guiding but here is a flavour of how good it was. 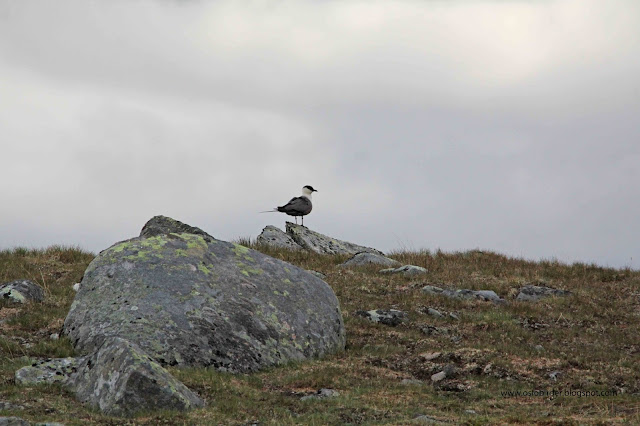 And a short video of the highlights, or at least the ones that I video ;-)