A Glaucous Gull was ringed in Oslo on 1 January (incredibly it seems to have been lured in with bread and then caught by hand http://oaring.blogspot.com/2011/01/parkfangst-uke-51-og-52.html ) . The bird then went missing until Saturday when it was seen again in Oslo harbour so I took a trip down on Sunday morning. Despite searching through in excess of 500 Herring Gulls along with a couple of other birders it was not to be seen so it was a bit of a blow to find out that it was seen a couple of hours after I left.
Lunchtime today saw me armed with my bins and heading off to the harbour. There were even more Herring Gulls around today (in excess of 700) and in amongst them were a few Great Black backs, Common Gulls and also 3 Black-headed Gulls which were my first this year. I had just finished my first sweep of the gulls when I saw a suitably pale and large gull at some distance. I was luckily able to walk much closer to it and in the end get to within 50m as it sat on the ice.

Sure enough it was a 1st winter (2k) Glaucous Gull proudly sporting a ring. I didn't have any bread to attract it even closer although I did toss out a Werthers Original but this didn't seem to be to anyones taste. I managed to take a picture of the bird with my phone through the bins. I-phones are not best suited for this but I must say the result could have been worse.

On the way back to the office I took a detour via the church favoured by the Peregrine and sure enough she(?) was sitting on top of the spire preening.

Feeling rather satisfied I finished my lunch break on a high with a celebratory McDonalds! Does life get better....
Lagt inn av rixy kl. 13:55 1 comment:

A big surprise today whilst driving into Maridalen for some family skiing (cross country). I spotted a large bird flying towards us at a height of about 100m. Seeing a large bird in flight is a rare enought sight at the moment and this one looked dark and at distance resembled a Cormorant. As we drove closer I saw it had white as well as black plumage and then as we drove underneath it it became clear it was an adult male Capercaille. Quite what is was doing flying over fields in the middle of the day I'm not sure but as I followed it out of the side window (whilst also driving and being asked to keep my eyes on the road) I then noticed there was a Goshawk flying not far behind it. Was the Goshawk hunting the Caper and the Caper fleeing for its life? I assumed that to be unlikely as a Goshawk is surely not large enough to take a Caper but according to BWP Capercailles do feature in the prey items of Goshawk so maybe it was chasing it or perhaps just having a bit of fun!
Lagt inn av rixy kl. 18:46 No comments:

A+ for effort, B- for achievement 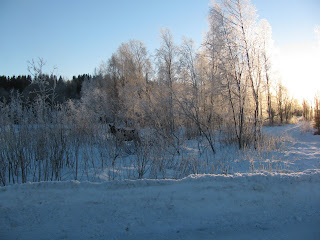 A couple of records of a Grey-headed Woodpecker at a feeding station in Maridalen was enough to tempt me to look for it even though I knew that it was erratic in its appearances. On the way up there wasa young elk by the roadside, as you can see in the picture it was very atmospheric in the wintery conditions. 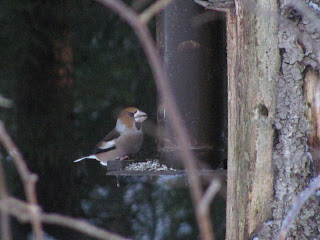 At the feeding station it was cold - about -13C and with the window wound down I soon realised I did not have enough clothes on. After 3 hours I was numb through and hardly able to talk. So I put in the effort and deserved to be rewarded, but of course I wasn't!
I did have a smidgen of success with a smart male Hawfinch which had the largest bill I ever noticed on one of these brutes. This bird dropped in for less than a minute so does go to show that the birds move around a lot even if there is a well stocked larder. During the 3 hours I saw a single Treecreeper which dropped in for a couple of minutes, 2 Nuthatches which were also only briefly present, a single Crested Tit which was there for no more than a couple of minutes and a pair of Greenfinches which dropped in twice. The only birds that seemed to hang around were Bullfinches but the numbers of these could vary from a pair to around 20 and Blue and Great Tits were nearly always to be seen with Coal and Willow Tits popping in every 10 minutes or so. Upto 4 Great Spotted Woodpeckers and 3 Jays were also fairly regular. 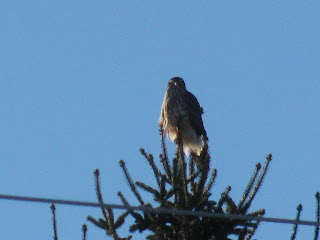 It is clear that the birds are constantly on the move, perhaps there is another feeding station nearby, or they are also finding natural food in the forest or maybe they get so much nutrition from the food that they just move off to digest it?
On the way home an immature Goshawk (female?) dwarfed the Magpies mobbing it
Lagt inn av rixy kl. 17:55 No comments: 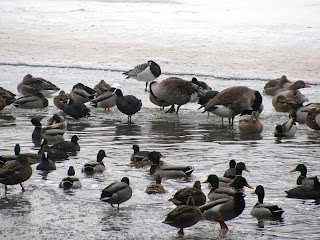 In attempt to increase my pitiful year list I have recently made an attempt to fill the most glaring holes. A visit to the fjord added Mute Swan, Tufted Duck, Goldeneye, Great Black-Backed and Common Gull, Little Grebe, Red Breasted Merganser, Eider and Comorant and a trip to Østensjøvannet gave me Canada, Barnacle and Greylag Goose and Coot.
Little Grebe is the only species that I may have trouble finding later in the year but it felt to get some birds under my belt. The year list has now reached 45 species!!! This is very very poor and does not include a single wader species but January birding in these parts is always slow going.
Lagt inn av rixy kl. 07:43 No comments:

I'm managing fairly regular visits to Maridalen although they are not turning up much of note. Todays visit with the kids (my reward after spending 2 hours at an indoor play centre) produced Sparrowhawk, Brambling, Chaffinch, Crested Tit, Great Spotted Woodpecker and perhaps best of all an elk feeding on a tree felled by a beaver earlier in the winter. Temperature at the moment is -7C with snow but the forecast is for it to swing to +7C tomorrow afternoon before plunging below zero again on monday - sounds like the roads will turn into death traps!
Lagt inn av rixy kl. 15:14 No comments:


The Peregrine was eating her(?) lunch on the 9th floor of the government building again yesterday with plucked feathers floating down to the ground. I wonder whether the person working in the office whose window ledge she has made into a restaurant is aware of this wonderful natural bloodbath that occurs there everyday.
Otherwise I have clocked up my first Mallard of the year and more excitingly found 2 Brambling and 3 Chaffinch at one of the feeding stations in Maridalen. These are very scarce winter birds around Oslo and especially so with the cold weather and snow we are having. Interestingly no Crested Tits this time but Red Squirrels at both stations feeding on sunflower seeds.
Lagt inn av rixy kl. 09:20 No comments:

A sniff of a bogey

Pine Grosbeak is one of my big bogey birds (although not the worst - that would have to be 3 Toed 'pecker). A flock of 16 was sighted today in Maridalen which is MY local patch! I was able to get up there before dusk and even saw the tree where I believe they had been sighted but no luck. Will have to search for them this week.
Lagt inn av rixy kl. 18:14 1 comment:

The conditions are now perfect for cross country skiing and trip in nordmarka gave a good work out although with my poor technique I am aching in areas where one is not supposed to have aches. Birds though were not to be seen with just a few Crossbills the only thing of interest. A check of the feeders in Maridalen though revealed a few Crested Tits which are not normally seen here (being a bird of the deeper forest) and is maybe a result of the heavy snowfall making it difficult to find natural food. Also a Green Woodpecker was a new bird for the year.

Near the house today a flock of 40 Waxwings was a welcome sight and although I didn't see them feeding I am assuming they have found an apple tree that still has some fruit.
Lagt inn av rixy kl. 21:33 1 comment:

We are having a good fall of snow in Oslo at the moment but it has not bought any new or exciting birds with it unfortunately. A drive round Maridalen produced a few birds at the 2 feeding stations which keen soles keep filled with sunflower seeds and fat balls. Amongst many Great and Blue Tits were a few Coal and Willow Tits, at least 12 Bullfinches, Tree Sparrows, Magpies, a couple of Jays, 2 Nuthatches and best of all a Treecreeper which was acting very out of character by feeding on the ground in the snow presumeably trying to find dropped food from the feeders.

Away from these feeding stations the only birds I noticed were a small flock of Yellowhammers by Skjerven farm and a Dipper on the river at Hammeren.

In the garden Redpoll, Siskin and Sparrowhawk flew over but at the feeders it is just the usual suspects. 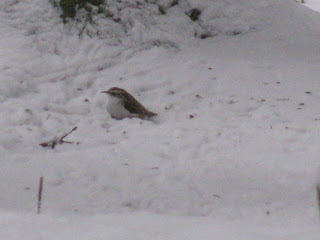 Treecreeper in the snow 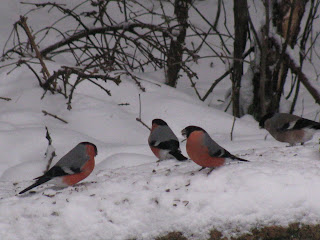 After a very enjoyable christmas in England it was back to Oslo for New Year. After finishing 2010 with a respectable norwegian year list of 201 species I am off to a cracking start in 2011 with 8 species to date! (House & Tree Sparrow, Greenfinch, Robin, Blackbird, Blue & Great Tit and Magpie). Despite not being fed for a week the regular garden birds are still present around the feeders in their usual numbers.
A Glacous Gull was sighted in the city yesterday so I might look for that this week if time permits.

In England I listened out for Waxwings which are there in record numbers this winter but without luck. We stayed with friends in Oxfordshire who have a great variety of birds in their garden. Highlight was 4 Red legged Partridge which came regularly to feeders right outside the kitche window and both Green and Great Spotted Woodpeckers.
Lagt inn av rixy kl. 14:32 1 comment: