Today was the day I have been waiting for for the whole of May – finally there was rain forecast and on top of that we are now having fresh southerly winds. There was no place to be other than Årnestangen and I had a long list of species that would turn up – headlined by all the arctic breeding wader plus a brace of rare terns and flocks of Little Gulls. If I were to fail on this then I expected as a very minimum Temminck’s Stint and Broad-billed Sandpiper. A singing Great Reed Warbler had also been found yesterday so I of course hoped that he would also still be present.

The alarm was set for 4am and I was on site at 04:40. The car park was empty which meant that I would leisurely be able to find all the rares that were undoubtedly waiting for me. The long walk out revealed no flyover waders and no raptors other than Osprey and this was enough to make me wonder if I should have stayed in bed. Arriving at the last bay I saw some waders but 2 Ringed Plover, 2 Little Ringed Plover, 3 Redshank and a Wood Sand were hardly what I was hoping for and I did long for my warm, dry bed.

Continuing out to the viewing platform the dry sandbanks held another 3 Ringed Plovers but nothing else! Lots of scanning continued to reveal nothing until a group of 5 waders flew by and landed in the bay. 4 Dunlin and a Broad-billed Sandpiper! A quick 5 minute walk back to the bay and I was able to watch them at close range and all before 6am 😊 Whilst watching over the next hour and a half another 3 Dunlin appeared, the Redshank numbers rose to 13, Ringed Plovers to 11 and a Temminck’s Stint arrived. Now, I had at least met minimum requirements. 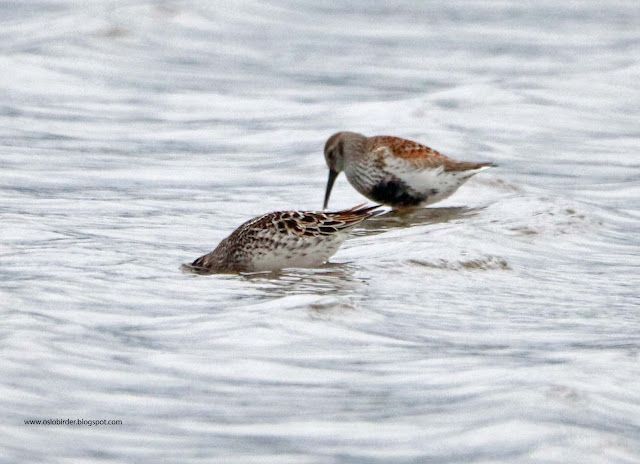 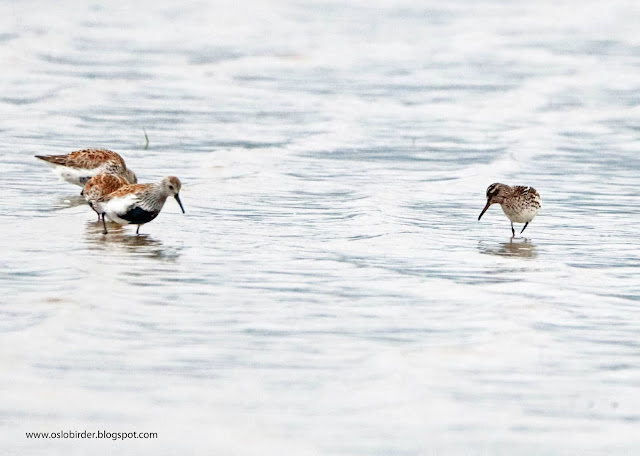 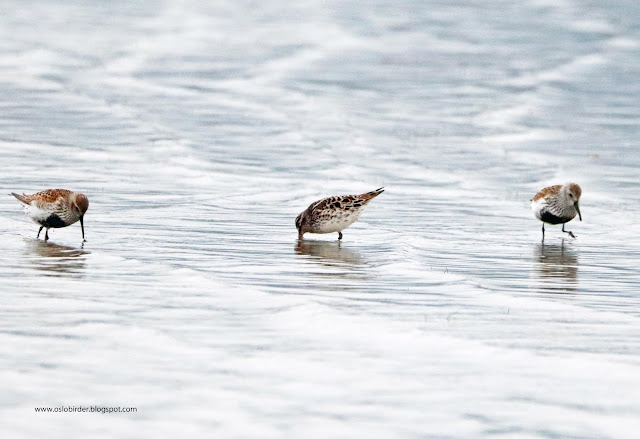 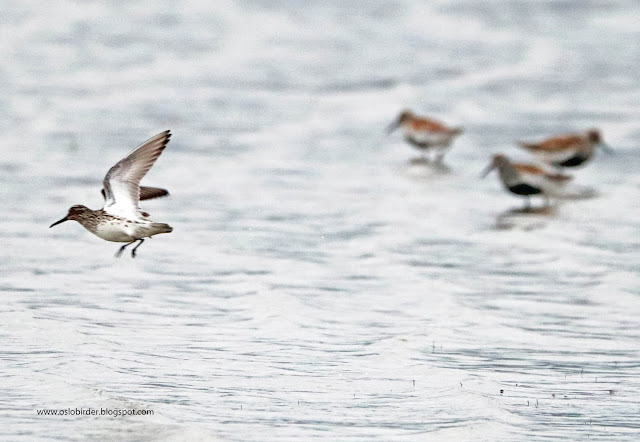 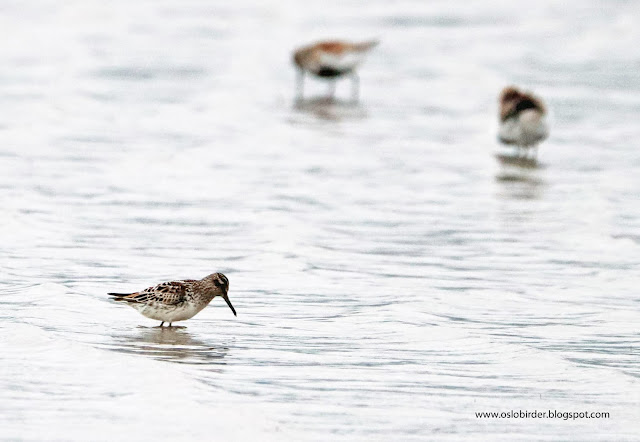 Walking back I had a Taiga Bean Goose in the company of a Greylag which is a very late date for this species, Thrush Nightingale, Long-eared Owl, Red-backed Shrike and Icterine, Sedge and Marsh Warbler so there was some padding although the Great Reed was not to be found.

Messages had ticked in of a Med Gull at Fornebu and a flyby Surf Scoter also in the inner Oslo fjord so I felt I should get to Fornebu. I of course had to stop at the (once) mighty Svellet. There is still a decent sized area of mud but when I scanned there was just a single wader here (in other years there would have been many hundreds). It was looong range but it looked like it had to be a Knot. It then started raining cats and dogs and I retreated to the car. 5 minutes later and the rain had moved over and a check with the scope revealed the Knot had moved closer and the ID could be confirmed although interestingly it was not in red summer plumage and there were now also 5 Ringed Plover. Another shower moved over which saw another retr
d what new birds may have turned up at Årnestangen and heard later that there were 4 Broad-billed in the end although thankfully nothing else. 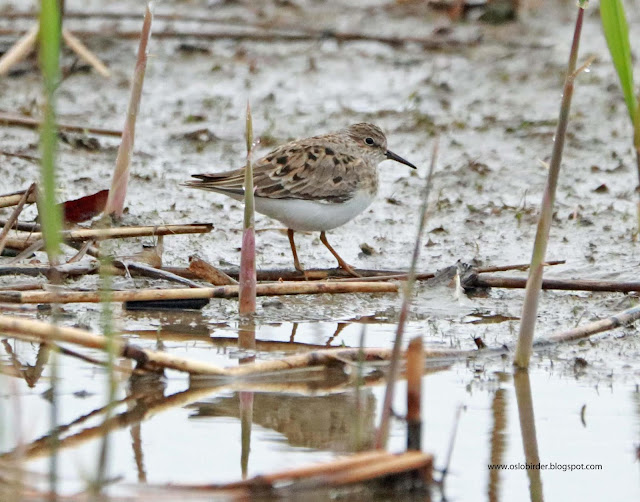 I did go to Fornebu but the Med Gull was not to be found. Offshore and at long range there was a nervous flock of around 40 Velvet Scoters. I expected to find the Surf amongst them but he wasn’t there although one of the male Velvets looked suspiciously different to the others but the range was just too far.
I also squeezed in a trip to Maridalen but there was nothing of interest on the lake. I searched for a Sedge Warbler that has been reported singing although not seen. This species is less than annual in Oslo and never previously recorded in Maridalen so it would have been good to confirm the bird. Nothing was singing for me though but I did briefly see an unstreaked acro warbler that was probably a Reed Warbler which would also be a new species for Maridalen but I failed to see it again despite much searching.

Yesterday in Maridalen we discovered a small young Tawny Owl still in the nest probably 5 days after his first sibling left the nest showing that it has been a good breeding season for the species. I also had my first Honey Buzzards of the year with 3 birds already back and engaging in their sky dancing display.