Continued overnight frosts and cold northerly winds mean that birding remains very quiet. My first Chiffchaff of the year has been my only new migrant since my last update.

In Maridalen there is a lot of drama between the Whooper and Mute Swans. The Mute Swans returned a few days and begun nest building but the Whoopers have been making it very clear that their presence is not welcome. The Whooper have the upper hand and regularly give the Mutes a right proper beating. Both the Mute Swans are ringed and when they were with other Mutes this winter the male was apparently very aggressive towards the others. With the Whoopers though he seems to have met his match and then some. Time will tell how it goes but the Mutes put up with their beatings last year although that may well have contributed to their failed breeding although last year was their first attempt which will also have played a role.

I have not witnessed the big fights but others have and have documented it well on Facebook. When I was there today the Mute and Swans were about 100m apart and seemed calm. But when a flock of 6 Whoopers flew in and wanted to land then the Whooper pair started making a right old noise and flapping their winds which caused the flock to pull up and land elsewhere. 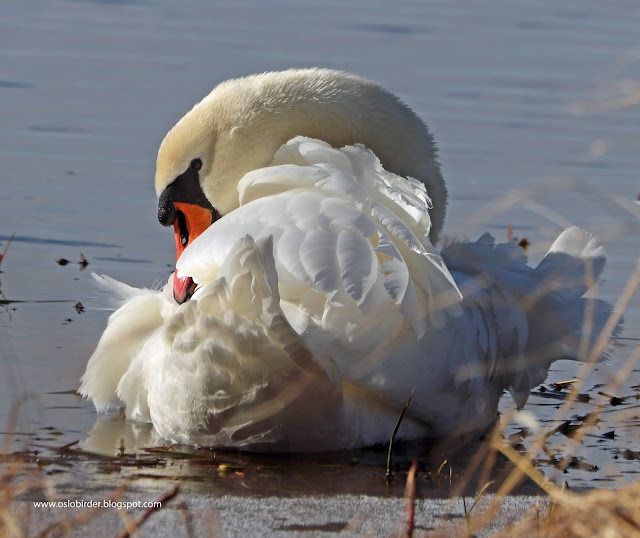 There have been some birding highlights though which I will write more about later...