I was unsure whether I would be unable to visit the Taiga Bean Geese (now officially a species in its own right) this autumn but I suddenly had time yesterday so made the 40 minute drive up to the Glomma River. I made contact with the geese at my first attempt which was a relief and saw a flock feeding in one of their favoured stubble fields. Canada and Barnacle Geese were on the same field and were feeding close to the road in the middle of the field whereas the Beans, in typical fashion, were at the far side on the edge of the field close to a wood.

Due to the long range I was unable to read any collars or see if there were young in the flock but could try to count them. This is always difficult as they often choose uneven ground to feed on and no two counts are ever the same. I came to 101 as being a reliable count but after only 10 minutes they flew off down to the river. I fired off lots of photos hoping that they would allow me to see neck collars or leg rings and make an accurate count. The pictures were not god enough to identify any ringed birds but I could see (only) three had collars. I was also able to count 105 birds.

I followed them down to the river and here they were swimming in a tight flock. After 20 minutes a bird flew in from the north calling and joined them. It would be interesting to know where this bird had come from. Had he just flown in from Sweden or had he been left behind at the overnight roost or somewhere closer by earlier in the day? On the river I counted 126 bird so there must have been a small flock already on the river.

126 is a lowish autumn count and maybe due to low breeding success. With only 3 collars noted it is also clear that the many of the older birds are no longer with us. This small population is always vulnerable. 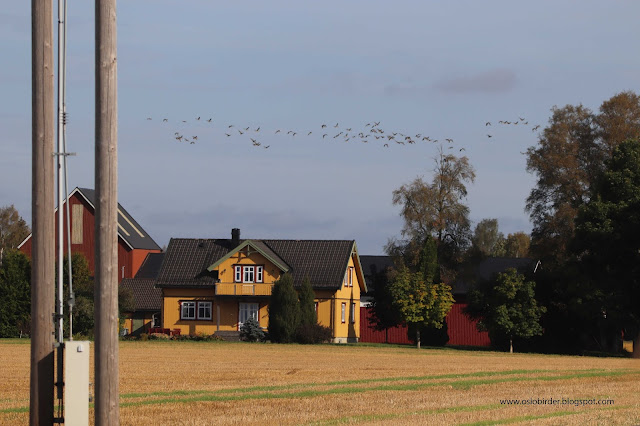