Much of my limited birding time the last week went towards working out the situation regarding breeding (or perhaps non-breeding) Lapwings and Little Ringed Plovers at Maridalsvannet. I wil blog about that later once I have the full picture but here are a few of the other birding highlights from the last week.

Three-toed Woodpeckers were easy to find until the beginning of June until I lost track of where they were which coincides with them starting to nest. I saw the female again on 2 June and she was clearly collecting food but it wasn’t until 12 June that the nest was found by Per Christian. I visited the same day and they were nesting right where I had my last observation in May. The young were making so much noise that it would have been impossible to walk by and not be aware of them although on my visits to the nest I have been amazed at how many “civilians” have walked past without turning their head.

I had only my second record of Common Rosefinch in Maridalen this year with a one day only singing red male and this year (and also last year) are worryingly poor for the species. Another species which seems scarce this year is Honey Buzzard and I had only y second sighting with a bird seemingly migrating north over the valley. Visits to last years nest have revealed no sign of activity but they could still breed.

Nocturnal visits have revealed quite a few Tawny Owls and the family I located a while ago showed quite well by the road one evening.

I also found time to twitch a Little Tern at the (nearly) mighty Svellet which was a Norwegian tick for me. I also twitched a Sandwich Tern at Fornebu which was seen whilst I was there (shopping with the kids) but despite a quick response I failed to see them and have now relegated this species to the list of ones I have accepted I will never see in Norway. 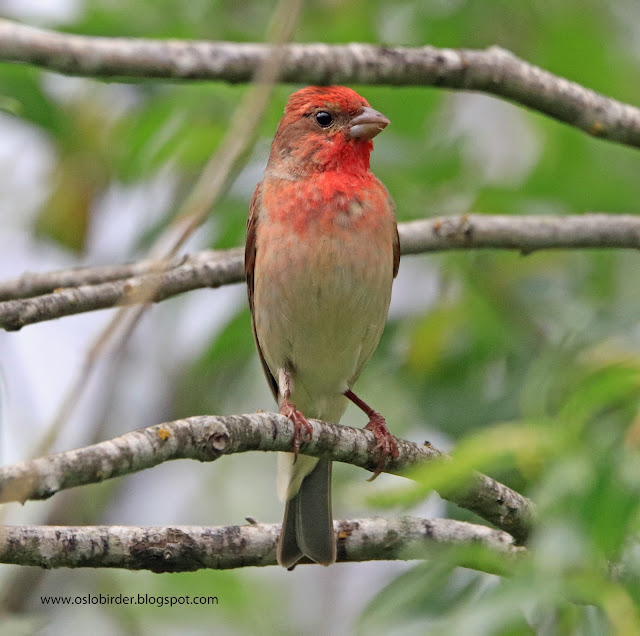