Who's a lucky boy?

13 hours birding yesterday (or at least 13 hours out of the house) is a sign that the days are getting longer if nothing else. There were some real quality birds today but there was not quantity.

The tip top quality has to come first meaning that I will write this in reverse chronological order. I found myself somewhere in Hedmark just before sunset hoping to get to properly see Eagle Owl (hubro) this time. I arrived at 1915 thinking I had good time as the sun was still shining on the nearby hill top although. I started eating my dinner when I heard the owl at 1920. At this time the light was still good and Yellowhammers (gulspurv) were still singing but even though the bird was less than 200m away I just couldn’t locate it. It sang nearly continually until 1955. I then saw it flying up into the trees 2005 (I suspect it may have paid a visit to its mate on the nest) and it then started singing again at 2010. I then saw it in flight (whilst still singing) at 2017 and I had it in full view (although very poor light) until I left at 2035.

Here is some half decent video (given the poor light) and finally you can see the bird and hear it using normal loudspeakers! 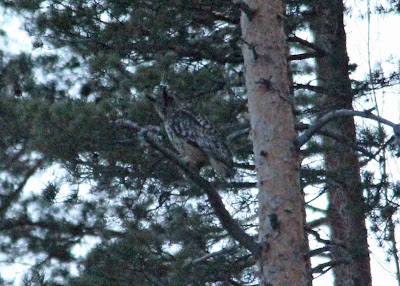 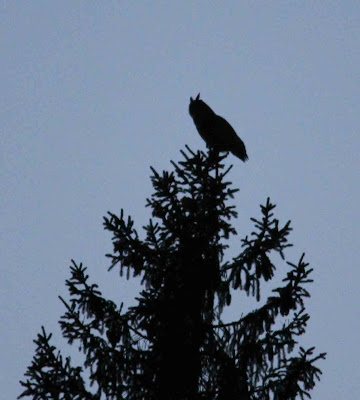 This site is really quite remarkable. The owl sings close to a small road and whilst I was there there was also shooting going on nearby which didn’t seem to bother the owl in any way. Given the owl sang from the same small area for the whole time I think it is safe to assume that the nest site is very close by. These birds are clearly not too worried about being close to humans!

A summary of what I saw:

Skylarks are back in force, Greylags (grågås) are building up in numbers along with the odd Canada Goose (kanadagås) and Whooper Swan (sangsvane), the first Cranes (trane) are back, a few Buzzards (musvåk) are to be seen, a few Reed Buntings (sivspurv) and Chaffinches (bokfink) are singing and a couple of Starlings (stær) were in fields. But that is really it, except for Udenes.

Udenes is the Scottish Bean Goose (sædgås) resting site. The first birds have been back a few days but today I was able to count 62 birds including three neck ringed birds. I could only read the rings on two and they were 4Z and 6S who I had also seen here on 20 March last year. None of the satellite tagged birds are here yet although one did fly here from Denmark on 28 March only to promptly return to Denmark! Conditions are by no means good for the birds here with the fields still snow covered. All the birds I saw were on the river. 15 were feeding along the edge in pairs or family groups, 33 were resting on the sand bank and a flock of 14 flew in from the north and joined the resting birds. The flock of 14 may have been a newly arrived flock or more likely given they came from the north were coming in from some fields where they had been attempting to feed. It is very interesting that these fabalis Bean Geese are so loyal to this site which attracts very few other geese (today just 2 Canada Geese) whilst site further south had good numbers of Greylag Geese but no Bean.
Also here 21 Whooper Swans, a singing Lesser Spotted Woodpecker (dvergspett) and a Lapwing (vipe).