With blue skies and a blazing sun it definitely felt like spring today especially when in the shade but the lack of migrants is obvious. 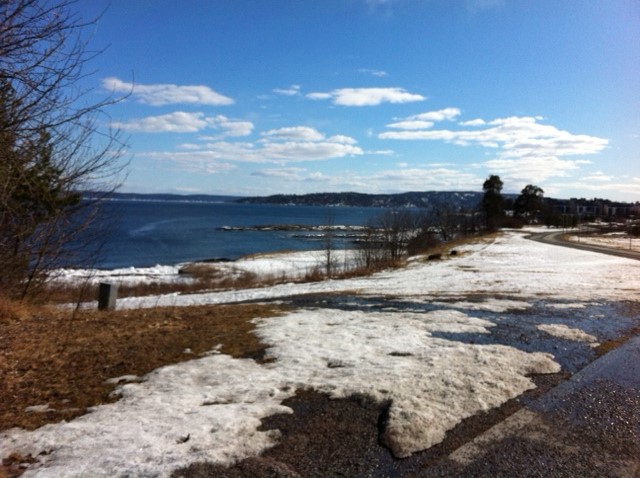 I had a very enjoyable afternoon with the girls at Fornebu today which did give me four year ticks but there really wasn't that much to see.
Hearing a Skylark (sanglerke) singing, a small flock of Starlings (stær) feeding, a Lapwing (vipe) flying over and watching Oystercatchers (tjeld) and Black-headed Gulls (hettemåke) displaying give a real taste of spring but where are all the other migrants? The Skylark and Lapwing were my first of the yearbut were a month later than my first last year. 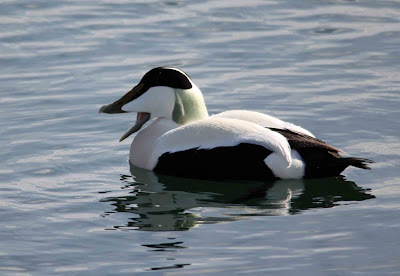 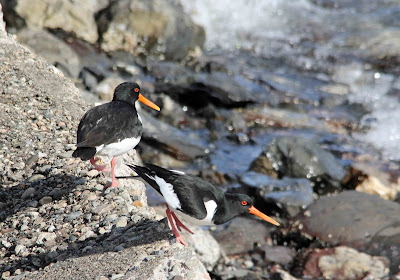 A group of Greylag Geese (grågås) feeding on a growing area of snow free grass (I saw the first birds here on 20 March) now the company of a Bean Goose (sædgås) which has been present a couple of days. This bird is a fairly clear rossicus subspecies, also known as Tundra Bean Goose, which can be seen by it being clearly smaller than the Greylags, having a short thick neck and a short deep based bill which gives it the jizz of a Pink-footed Geese although the orange legs and orange banded bill leave little doubt that it is a Bean. The bill isn't the deepest based for this subspecies but you can see the base of the lower mandible is thicker.
I have also shown for comparison the overwintering Pink- footed Goose and the fabalis subspecies (taiga) Bean Goose that overwintered last year (which didn't have the longest bill for this subspecies).
This bird although wary has chosen an area where it is very close to people but this is perhaps the only suitable feeding ground around Oslo currently and it was munching away continuously. The Bean Goose was my third year tick and my fourth was a sun burnt face which I has arrived at around its usual time!