A day of ducks


Alarm clock set for 5am in spring can only mean one thing: the sea gazing season has started! I had a four hour session with Per Buertange at Brentetangen today from 06.30 – 10.30. A decent strength wind (10 m/s) from the SW was what drew us there but in the end although there was enough to keep us amused it was clearly still early in the year. The wind did blow in Gannets (havsule) of which we had at least 20 flying in all directions and feeding but these were the only true seabirds. There was some northerly duck passage with 119 Common Scoter the most numerous. We also had 9 Red-throated Divers (smålom) heading north and the same number heading south along with a Black-throated Diver (storlom).

The highlight though of our session was raptor passage. We had 22 Buzzards (musvåk) heading west over the fjord (it is 8km wide here) and 6 Sparrowhawks (spurvehauk) heading east and 2 west. It was interesting that a number of Sparrowhawks were heading in the opposite direction to the Buzzards and also interesting that the Buzzards were migrating so early in the day when they had no thermals to help them. We also had good passerine passage with thrushes and finches heading west over the fjord including Ring Ouzels (ringtrost) and Mistle Thurshes (duetrost). About 15km up the coast and on the other side of the fjord they had both Red Kite (glente) and Golden Eagle (kongeørn) coming across the fjord so it shows there was a large raptor passage over a broad front today probably as a result of a backlog having built up and todays sunny weather and southerly winds was the first real chance to push on to the breeding grounds (at least for the Buzzards).

Finished with sea gazing I headed for Kurefjorden where wildfowl and hopefully some waders were the target. A resting flock of 300 Pink-footed Geese (kortnebbgås) were the first birds I saw and as I scanned the ducks I picked up a few Wigeon (brunnakke) and a nice male Shoveler (skjeand). There were also 8 Bar-tailed Godwits (lappspove) amongst Curlews (storspove). Looking into the bay to my east I saw 100 or so Teal (krikkand) and hoping to find a Garganey (knekkand) I moved closer to try to get better viewing conditions as the light was pretty bad. I was able to position myself quite close behind a raised bank and started going through the Teal. No Garganey on the first or second sweep but on the third sweep I saw a vertical white stripe – a Green-winged Teal! My second and a half sighting of this species this year and the second one I had found. I raised the camera to try to get a picture, couldn’t locate the bird, switched back to the scope and still couldn’t see the bird. I began to doubt myself but after 15 minutes I found the bird again. The lighting conditions were really lousy but I fired off 100 or so shots.

In the field the bird looked like a pure Green-winged Teal and definitely did not strike me as a hybrid like the bird in Akershus I saw on Monday. However on checking the pictures a thin light coloured (I don’t think it is white) horizontal stripe can be seen. This is I believe within the variation of Green winged Teal, see a similar bird here and a discussion of the bird here. However in some of the pictures I think the horizontal stripe does look worryingly large although in others it is absent. The head markings were also good for Green-winged Teal with only a faint golden border to the green eye patch. I believe this bird to be the real deal but hope that better pictures in more neutral light can be taken.

Happy with the teal but slightly annoyed as to not have found a Garganey I stopped off at Fornebu on my way home where a pair have been seen for the last three days. I only found the male but he showed incredibly well feeding amongst seaweed in a small area of ice free water by the beach at the end of Storøya. Garganey has always been my favourite duck - the male is incredibly smart but I think the species is made extra special because in England it is the only duck that is a summer visitor whereas all the other ducks are primarily winter visitors which always made it harder and more special to see. 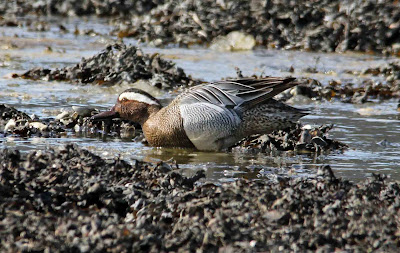 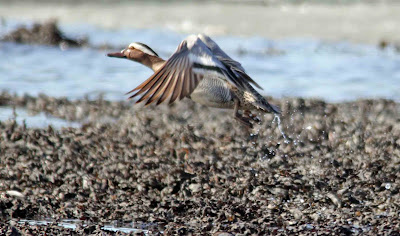 And here is a short video. I used the youtube autocorrect function for a wobbly film which gives interesting results!

Very happy that I had managed such good views of the Garganey I picked my youngest up from kindergarten and bribed her into accompanying me on a trip around Maridalen. The fields are fast clearing of snow and I had a good flock of thrushes at Kirkeby with 4 Ring Ouzels and 2 Mistle Thrushes amongst them. Also here a flock of Pink-footed Geese headed north although spent 5 minutes circling making up their mind, a female Merlin (dvergfalk) flew over and a Snipe (enkeltbakkasin) dropped into “snipe marsh”. And as if that wasn’t enough my first Chaffinch of the year in the garden was waiting for me when I got home.