It’s a bit of a job to go through all the pictures and memories from the holiday.

To start with here are some pictures and video of the Asian White-winged Scoter and Long-tailed Skuas that I mentioned in a previous post. The scoter ended up being fairly easy to find early in the mornings when the light was good but despite being one the closest birds was never in real photo range. I also saw the Pied-billed Grebe a couple of more times although it was also a lot further out than on the day I found it.

I’m now back in Oslo where temperatures and humidity are almost unbearable. I have lots of experiences from the summer holiday that I need to blog about and hopefully will do so in due course but first off a post from today in Oslo.

I was keen to check out Maridalen this morning and braved the heat. I was hoping for large areas of exposed mud on the lake but amazingly the water level was higher than 3 weeks ago. This despite record temperatures and next to no rain. There have been water restrictions in Oslo but how on earth can the water level rise when there are just two streams feeding the lake? Bird wise I had a pair of Common Rosefinch making a lot of noise and their behaviour strongly suggested young nearby but I failed to find them. A young Red-backed Shrike was also being mobbed by a variety of other passerines.

Everything was so brown and there were very few flowers left and butterflies were in short supply with Queen of Spain Fritillary being the most numerous. This species is clearly expanding as a result of the recent warm summers – I had the first record in Oslo as recently as August 2016 and today it was the commonest species I saw!

Highlight of the day was reserved for the garden where a female Brown Hairstreak showed really well. This is only the 3rd time I have seen this rare butterfly and the first time in Oslo. 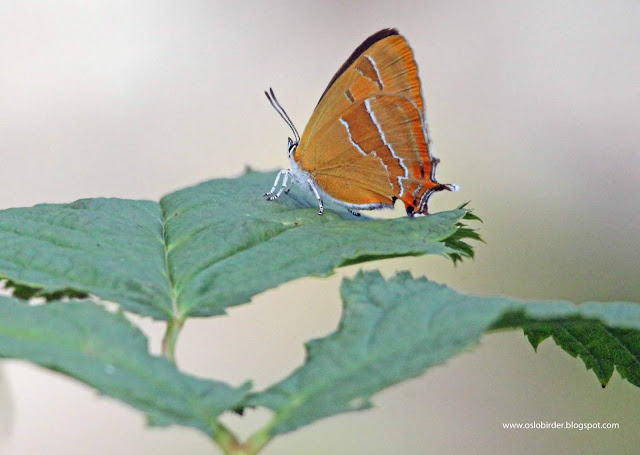 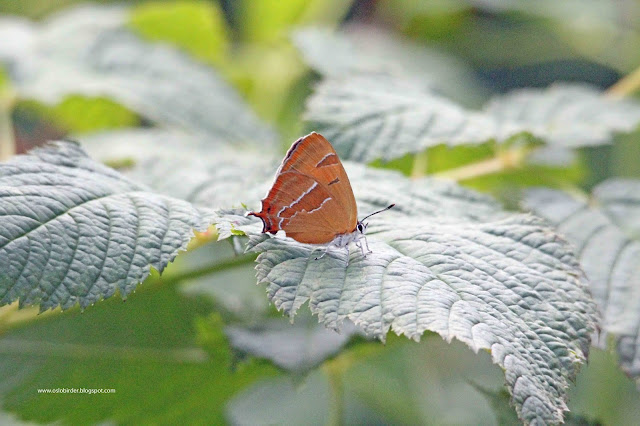 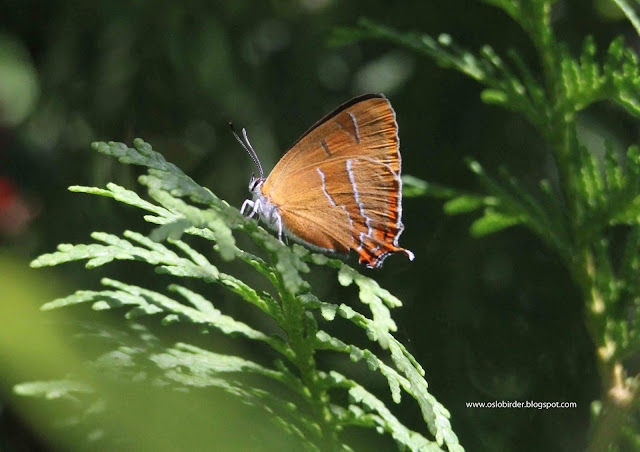 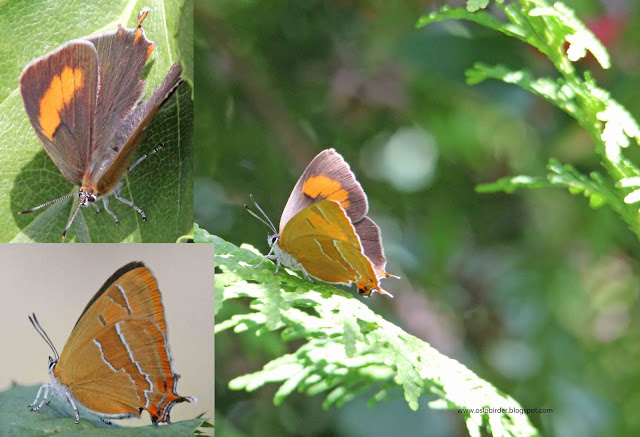 I've had time to edit some videos. First off are videos from my guiding on 7 June.

Here are some pictures and a video of the Pied-billed Grebe (ringnebbdykker). 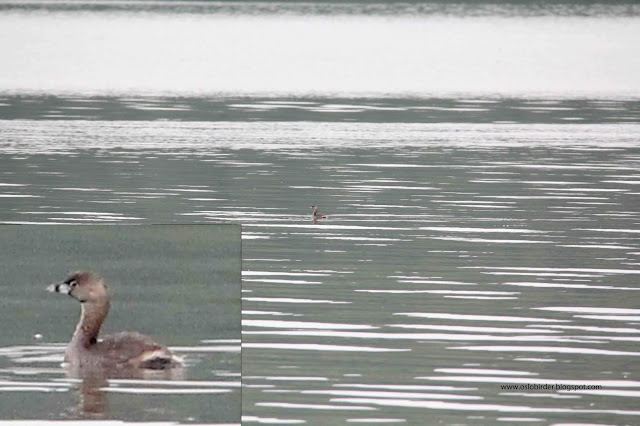 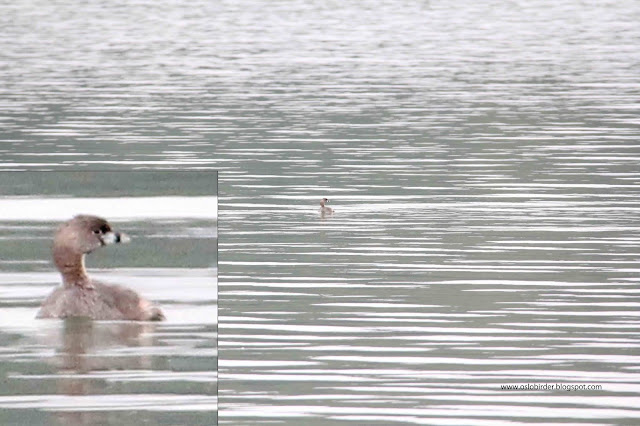 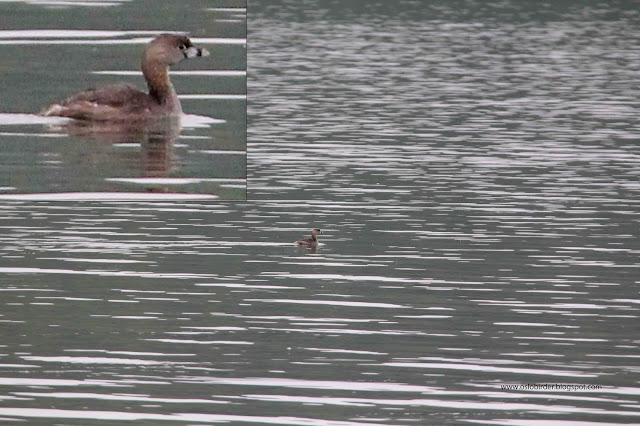 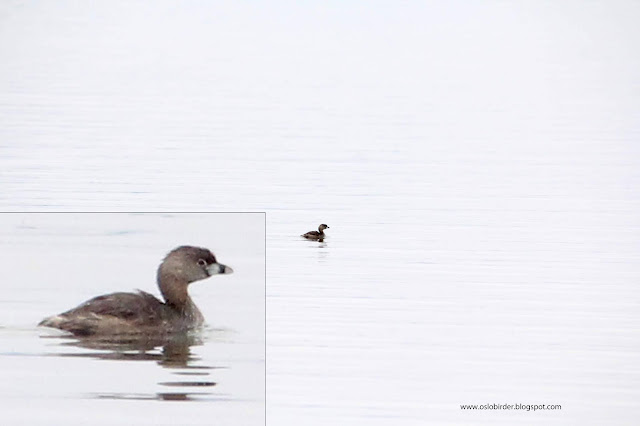 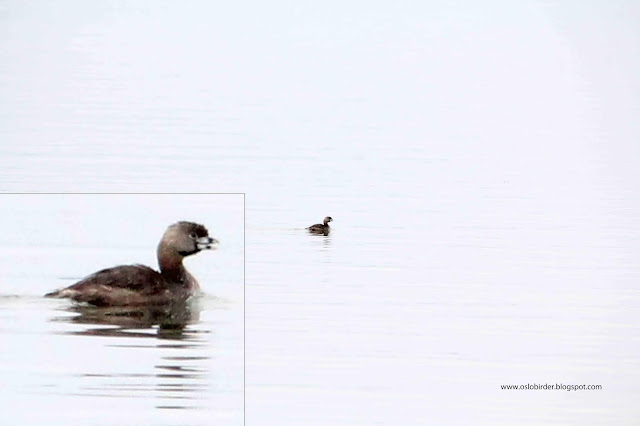 Our summer holiday has, as always, brought us to Bodø in Northern Norway and north of the Arctic Circle. The drive north featured less birding than normal because for the first time I had company of the whole family. A few days in Røros included a new and yet again unsuccesful search for Siberian Tit in southern Norway in Femund (the last published sighting from southern Norway is from 2016 and this species is clearly in decline) and it was only when we crossed the Arctic Circle at Saltfjellet that I had some interesting birds. Many waders were acting like they had young nearby including Red-necked Phalarope and Ruff and I also had Lapland Bunting and Long-tailed Skua.

I was unable to sleep in on my first morning in Bodø as I had to check out the fjord near Fauske where the first goal was to refind Knobby and then find American Black Scoter and Surf Scoter - it always helps to have a goal or two....
I was very disappointed when there were no scoters within identifiable distance at Røvika (although there were many hundreds of ducks a long way out). I continued to the end of the fjord at Klungset where there were a very disappointing 20 or so Velvet Scoters and a few other birds. I started getting a bit down and wondering if I could get hold of a boat during the holiday to get closer to the birds when I noticed a small grebe. I expected it to be a Slavonian but it was brown and I thought I had found my first Little Grebe in Nordland. I zoomed in for a better look and BOOM it was a Pied-billed Grebe!! I was a bit shocked and as the bird was quite distant I couldn't get any usable photos. I put out the news and after a while the bird came a but closer. After an hour I was joined by Torbjørn Aakre who had come from Bodø and then the bird came a bit closer allowing me finally to get some good photos and video. This is only the 8th record in Norway although as some previous birds have been long stayers it may not attract that much attention.
By now I was cold and hungry and started to head back home. A stop for another check of the fjord revealed 20 Slavonian Grebes, a few Red and Black-throated Divers
(including 4 2cy birds) and best of all a summer plumaged Red-necked Grebe which was encouraging. I checked Røvika again and a scan revealed a handful of Velvet Scoters had moved closer and sure enough Knobby (Asian White-winged Scoter) was with them for his 4th summer!!! :-)
What a great start to the summer in the north.

Today I was out for a fishing trip less than 2km from shore where a few Puffins and many Arctic Terns were nice birds. Some rain and cloud came in and the fish were biting when I heard a lot of birds calling. I struggled to recognise the call and at first couldn't see any birds when suddenly a flock of Long-tailed Skuas appeared. And then more and more. Over the next hour I saw at least 150 birds in the area in groups of up to 50 birds.
They were sitting on the sea or flying around calling but not feeding as far as I could see.
These were clearly non breeding or failed breeding birds and to see so many together is not a good sign. I am not aware of any similar sightings from previous years and wonder what these birds were doing.

I have lots of pictures and videos that need to be uploaded and will do so when I get the opportunity
Lagt inn av rixy kl. 20:07 No comments:

I eventually found up to 9 breeding pairs of Red-backed Shrikes (5 pairs plus single birds at 4 sites) plus Wrynecks at 2 sites so these two species may well have an OK year after all. One of the pairs of Wrynecks had 3 young already out of the nest and I heard their begging call for the first time – a call which can be confused with the song of Firecrest! One of the pairs of Red-backed Shrikes also had young which had just flown out of the nest and which were much shyer than their parents and kept in the depth of bushes most of the time. Raptors were very scarce with just local breeding Common Buzzard and Sparrowhawk – I had expected to find Honey Buzzards.

Butterflies continued to be my main focus. I added eight new species:

I also managed my first ever picture of the Pearly Heath and managed to see from a picture the spine on the front leg of the male Silver-studded Blue which confirmed my suspicion that the smaller blue butterflies I were seeing were this species and not Idas Blue although as these two species can fly together I could well have seen both. 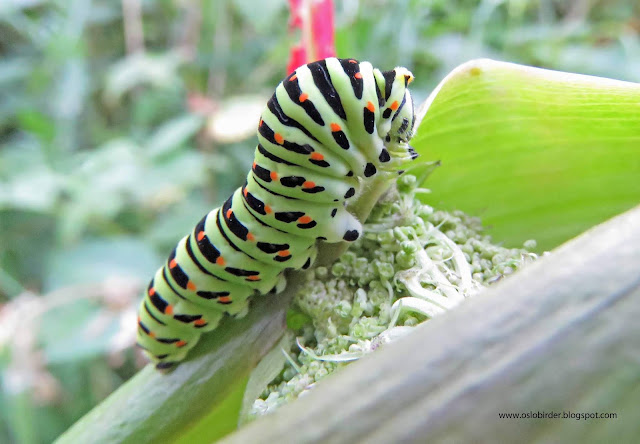