Pine Grosbeaks are back!

I moved to Norway in February 2001. I had a long list of scandi birds I wanted and expected to see but soon found out that most of them did not occur around Oslo and would require some travel. Pine Grosbeak was at the top of my list alongside Hawk Owl but it took me ten years to see my first birds and that required a trip to Pasvik in Finnmark with Per Christian. My first bird in Oslo was not until 29 October 2012 which was the first of many I saw that winter when there was a quite sizeable invasion of the species into southern Scandinavia. Locals talk about invasion occurring every 20 years and me having to wait nearly 12 years to see one close to home fitted in well with this. Since then though I have seen the species much more often in Oslo. There was a small arrival in November 2016, I had a single sighting in November 2017 and then there was a huge invasion in 2019 with the first record on 21 October. Now it looks like we will also have an invasion this winter so the 20 year rule definitely no longer applies and it is easy to speculate that climate change may be affecting food availablity in their usual northerly range causing them to have to move south to find food.

One thing that I have always wondered about though is why they travel such huge differences when they could clearly find food much closer to home. In 2019 and again this year there are huge crops of rowan berries around Oslo but there are also huge crops much further north so they have not needed to fly so far so early. Grosbeaks do not even need berries as shoots on spruce trees are their staple diet and when they came in 2012 and 2016 there were no berries and it was spruce shoots that they ate. In the 2012 invasion the first records were of birds migrating north along the southern coast of Norway so here they had clearly just been flying and flying before hitting the coast and turning around. There must be a PhD in understanding what drives eruptions of birds (unless it has been done already).

I wrote yesterday morning that the first reports of Grosbeaks were coming in and I therefore planned the dog walk to an area of forest which has proved popular with Grozzas in years with and without rowan berries. We didn’t have to walk far before a flock of 8 appeared and they then showed exceptionally well feeding low down on berries before flying up into the tops of spruces and eating shoots. When they are in the spruce trees they are incredibly difficult to find especially as they call so infrequently and it is very easy to walk past them. All 8 birds looked to be youngsters.

Today I got up early with the mission of finding them in the Dale and at my first stop at some berry laden trees I found 5 birds which were again all youngsters. I couldn’t find them anywhere else in the Dale and on returning to the original birds a flock of 12 flew into join them which included 2 adult males. 25 birds in total over 2 days with just 2 adult males is a skewed age/sex ratio especially when compared to the invasion in 2019 when there was a much higher ration of adult males. This could suggest that there are slightly different factors driving the invasions. This year there may have been a bumper breeding season combined with little food in the north but in 2019 it looked to be just food that was the driver. The origin of the birds also seems to vary between invasions. Invasions before my time could through other sightings be traced to east in Russia whereas the 2019 invasion looked to have originated in fenno Scandinavia. 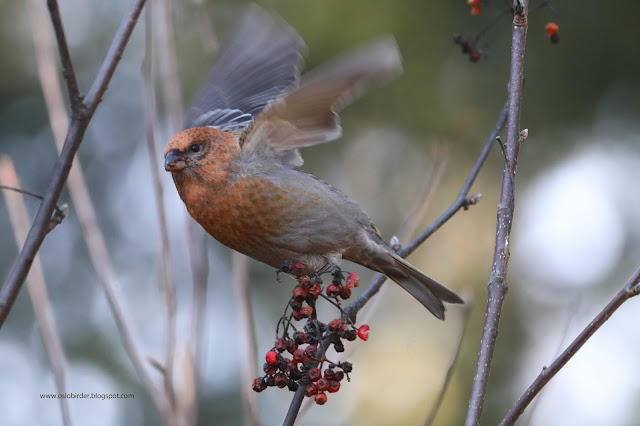 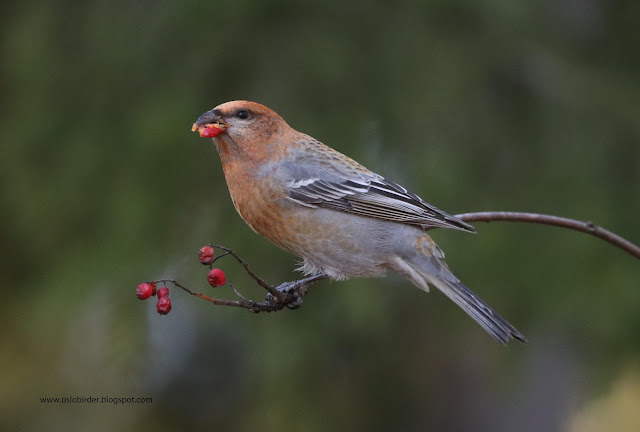 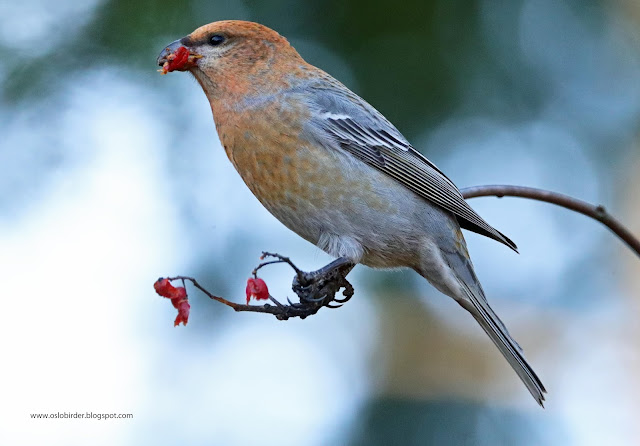 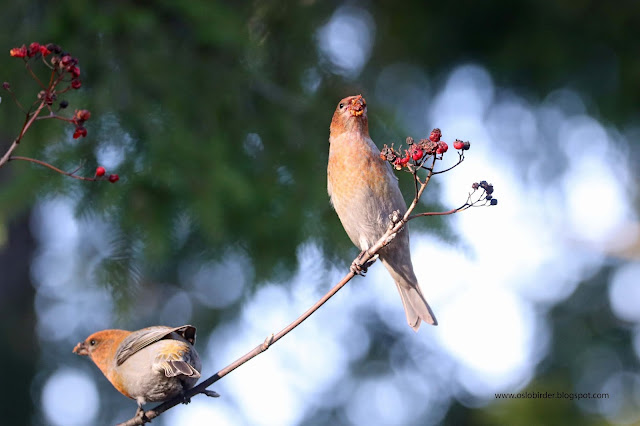 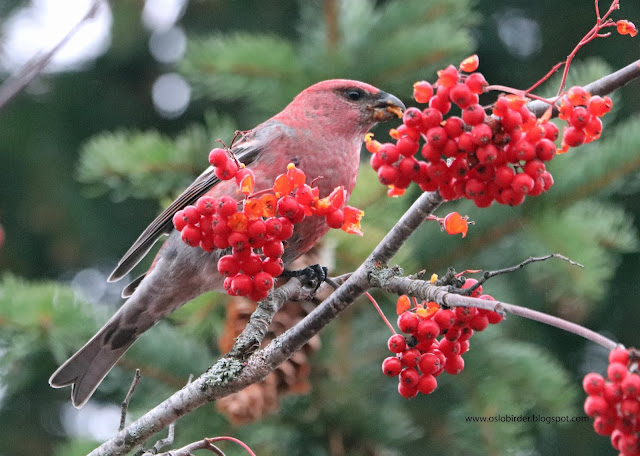 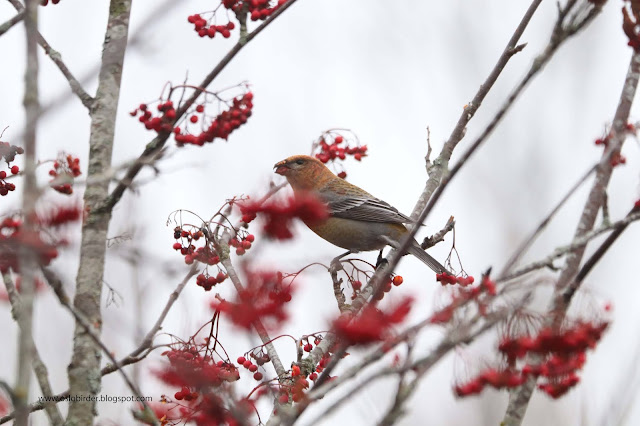 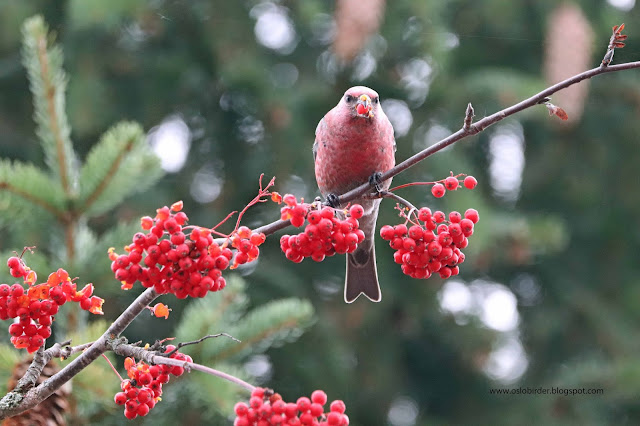 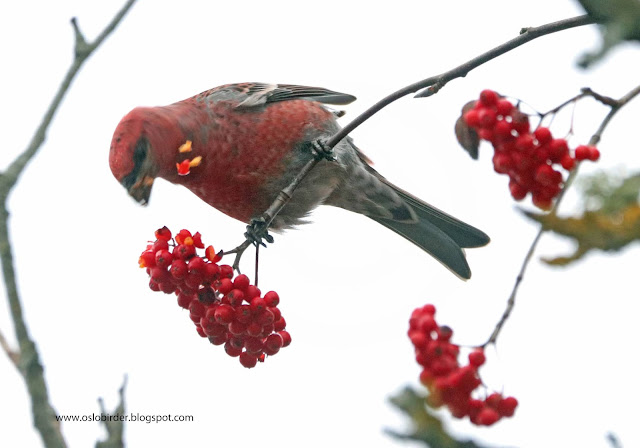 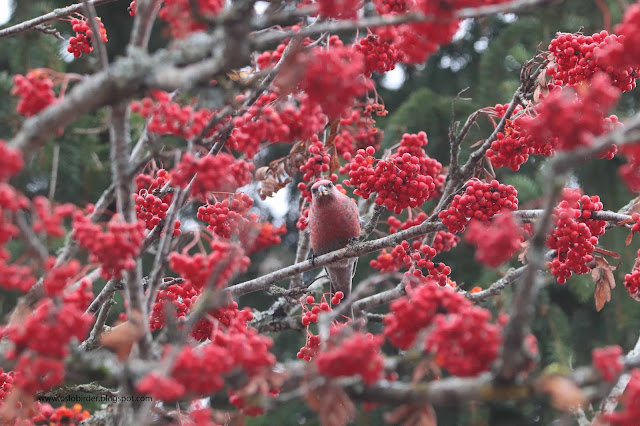 I write this on Saturday morning whilst enjoying a cup of coffee, silence in the house and the smell of fresh pain au chocolat. What I am not doing is watching birds in the fjord from Halvard’s boat (thanks for the invite) or watching the first Pine Grosbeaks (messages coming in from just north east of Oslo). But the day is still young and that dog will need walking somewhere…

The last few days have seen changing weather with lots of fog one day and then glorious sun the next. In the fog on Wednesday I heard a for me, unknown call emanating from Maridalsvannet and later in the day when the fog had lifted I found an adult and juv Red-throated Diver which matches well with the call. It is very late for them to be here and suggests a very late breeding further north.

Yesterday, I spent time in the forest yesterday ahead of some guiding on Monday and had hoped to find the first Grosbeak of the autumn but had to content myself with Hazel Grouse and Pygmy Owl – which did make me very content 😊

The Scaup remains at Østensjøvannet attracting a lot of attention from photographers who have never photographed the species before and it must be the most popular bird on local social media at the moment despite it being very grotty. The Smew seem to have moved on though but a Guillemot amongst the Coots and Mallards was an interesting sight. 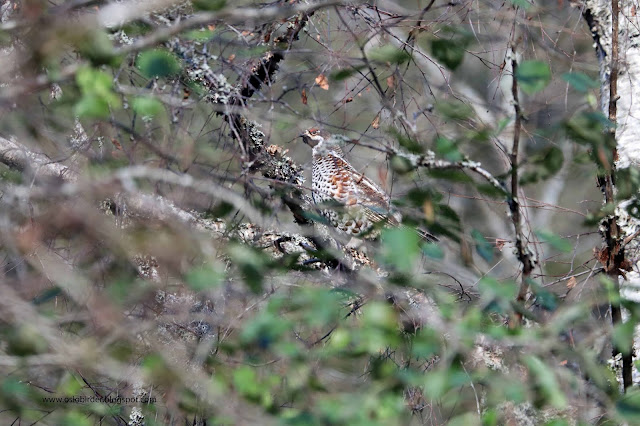 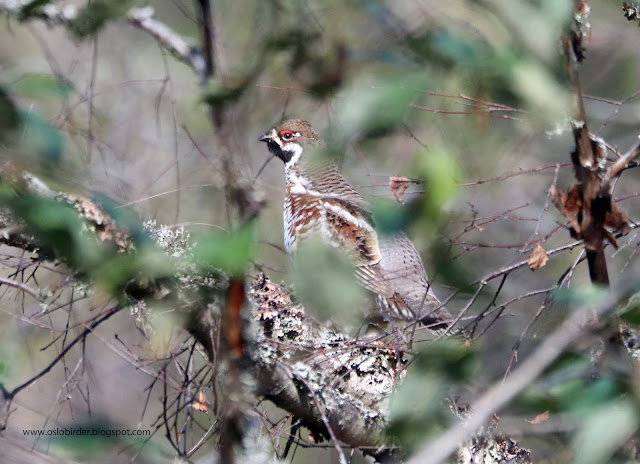 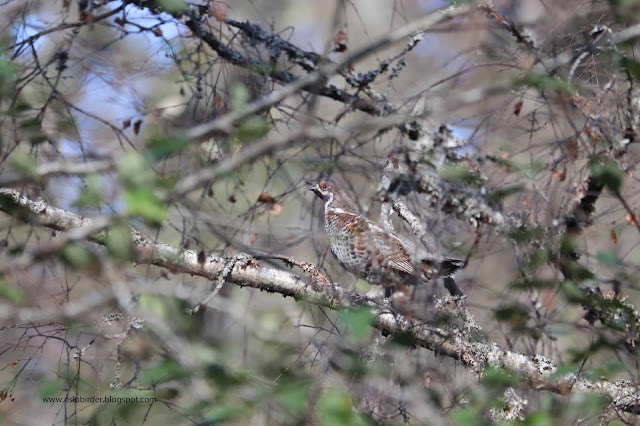 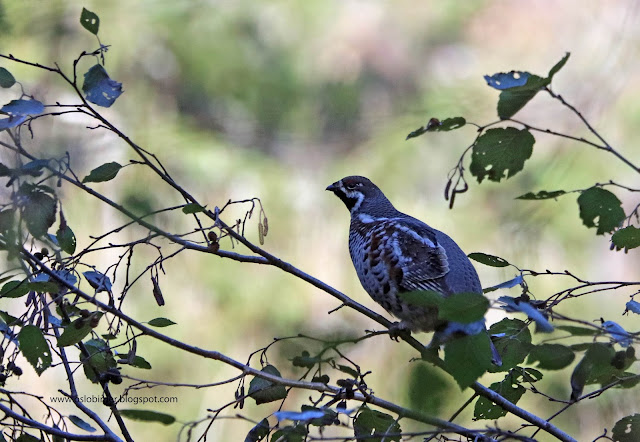 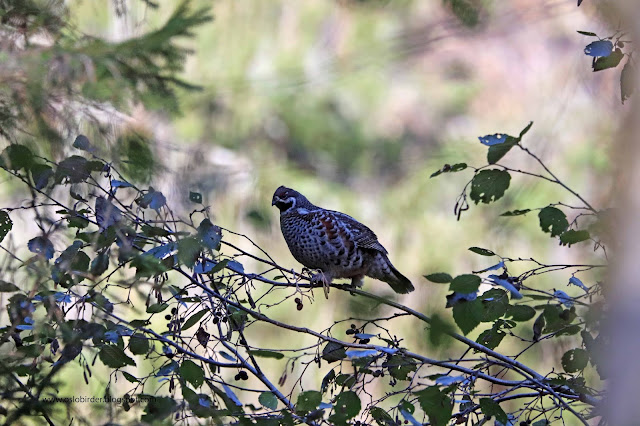 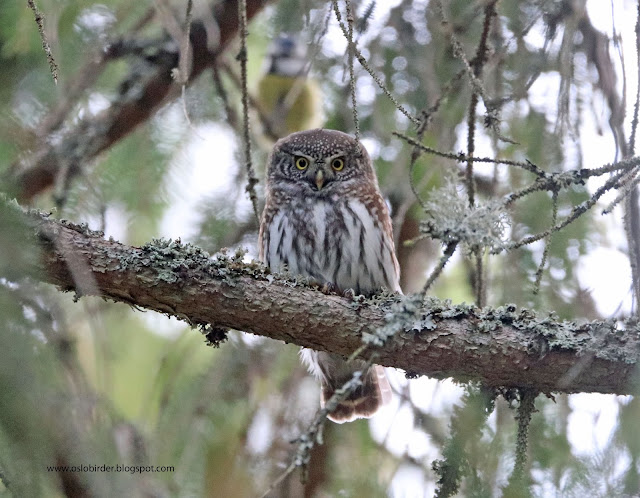 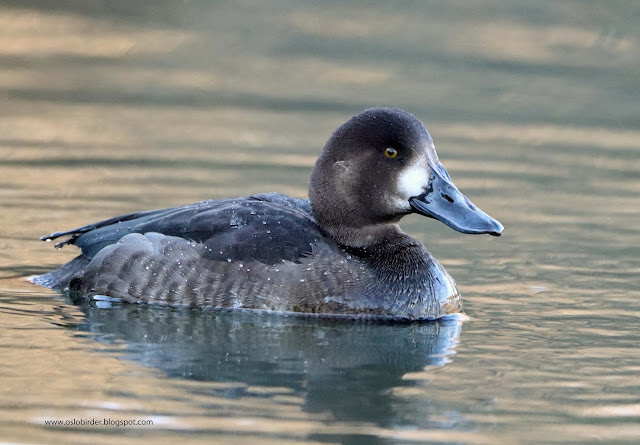 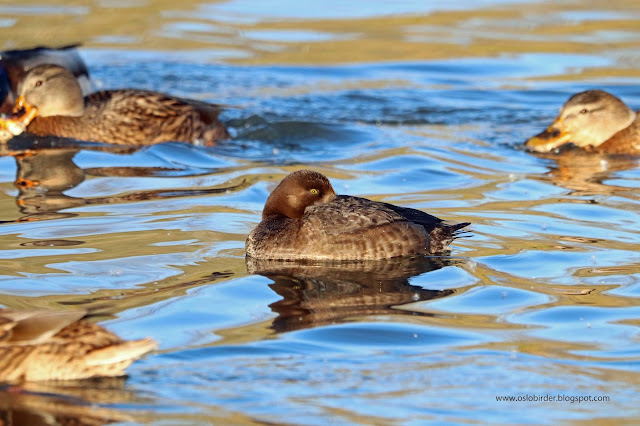 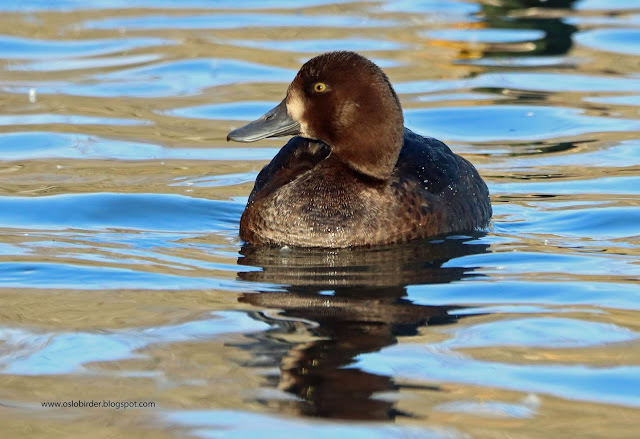 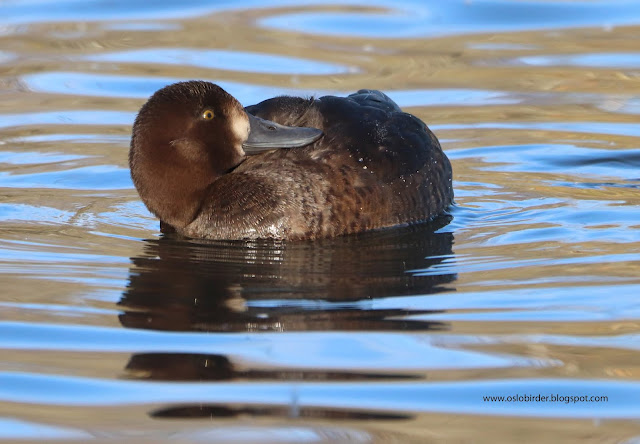 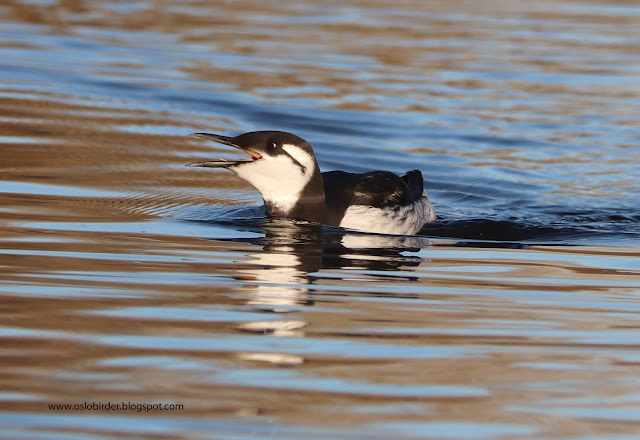 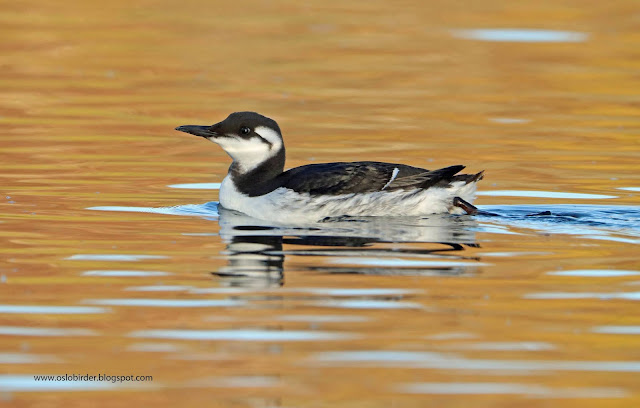 The first snow came yesterday and with it the first Waxwings! I also read in a Swedish Facebook group that Pine Grosbeaks have just started moving south there so maybe we will have a fantastic late winter autumn and early winter with rowan trees full of berries, Waxwings and Grozzas!

Despite the trees nearly collapsing under the weight of the berries there were hardly any thrushes left in Maridalen and 8 Waxwings and 30 Bramblings outnumbered them. A single Mistle Thrush was unusual though and I wonder whether it will attempt to spend the winter.

A trip to Østensjøvannet revealed around a 1000 Fieldfare feeding on playing fields and would perhaps explain why I only saw one in Maridalen. Do Fieldfares prefer worms to berries if they can choose?

The lake was also full of birds with Greylag Geese, Wigeon, Whooper Swans and Coots the most numerous. Scarcity was provided by a Scaup feeding at just a few metres range and a couple of Smew at a far greater distance. The Scaup was a 1st winter and of the sort where you have to work a bit to convince yourself that it isn’t a female Tufted. There was also a female Tufted with a very white area around the bill that I worked hard with to convince myself it wasn’t a Lesser Scaup… 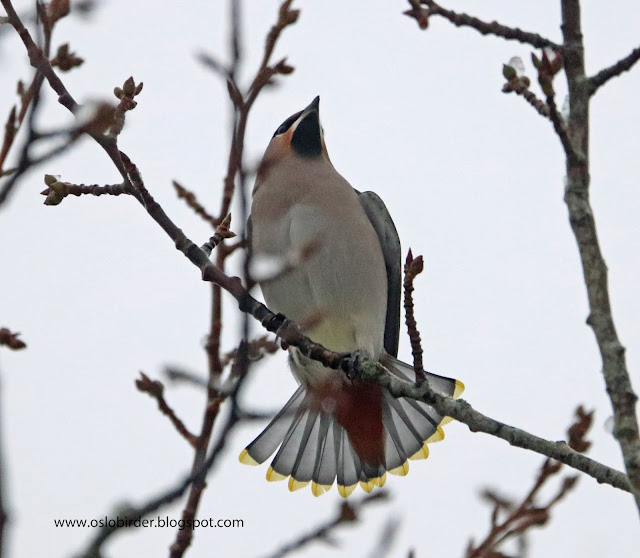 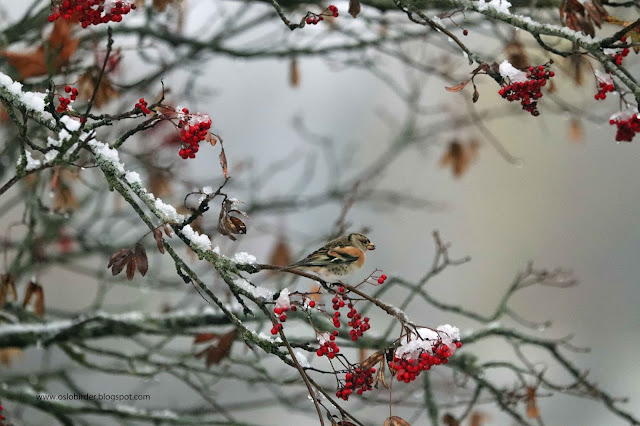 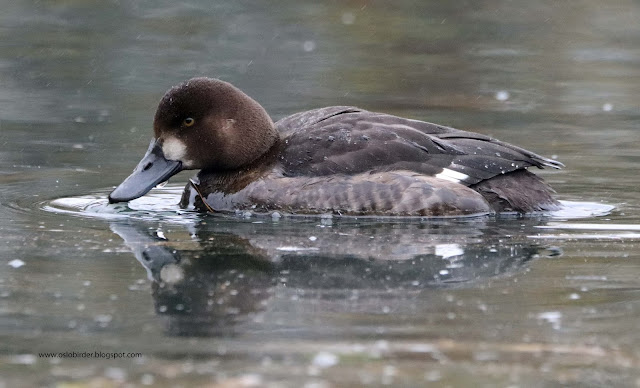 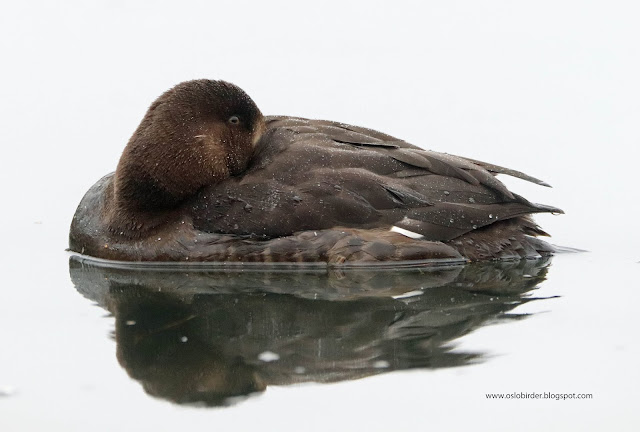 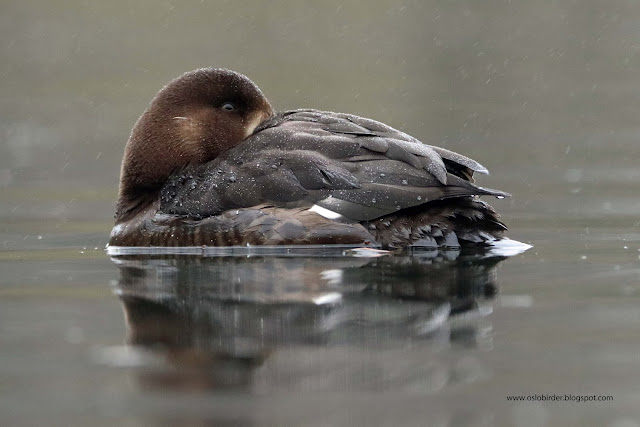 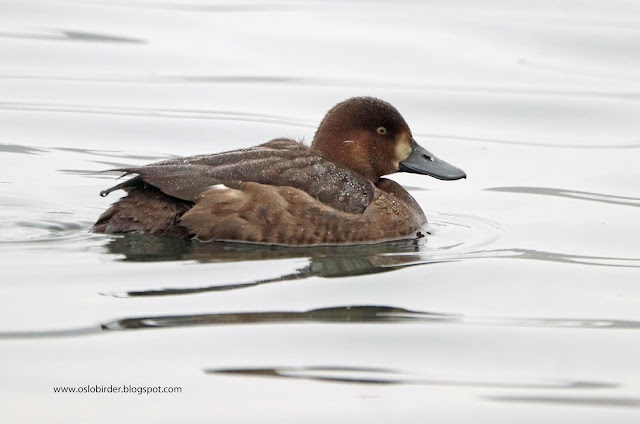