We had sleet and snow again today combined with northerly winds and there really wasn’t much going on on the bird front.

I had a few Ring Ouzels in Maridalen and a Black-throated Diver (one of eight) showed really well although the poor light meant my photos were much poorer than they could have been.

I paid a quick visit to Fornebu where I thought there might be some birds on the fjord but I thought wrong. I did get my first Wheatear of the year though and a Ringed Plover in display flight was a sight that I doubt I will see here again. 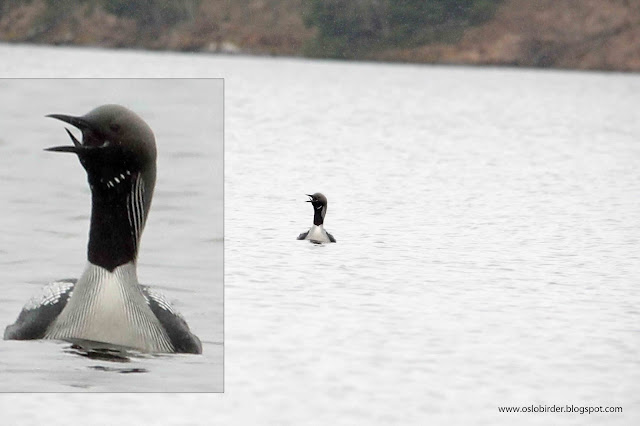 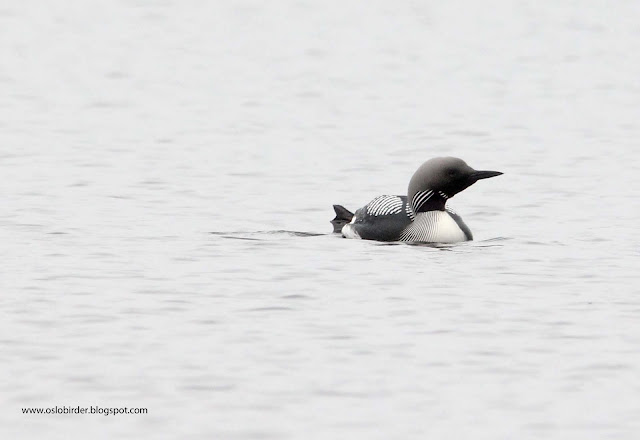 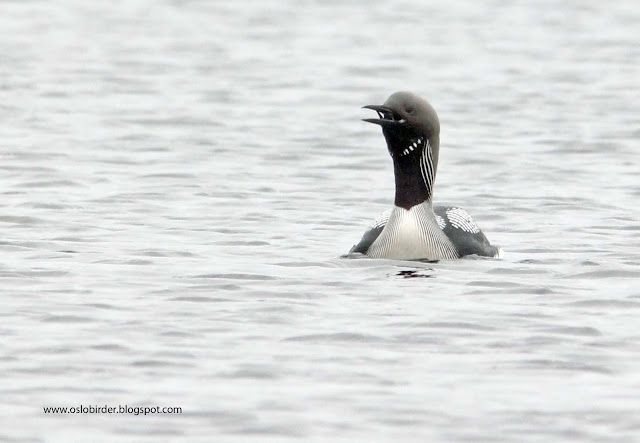 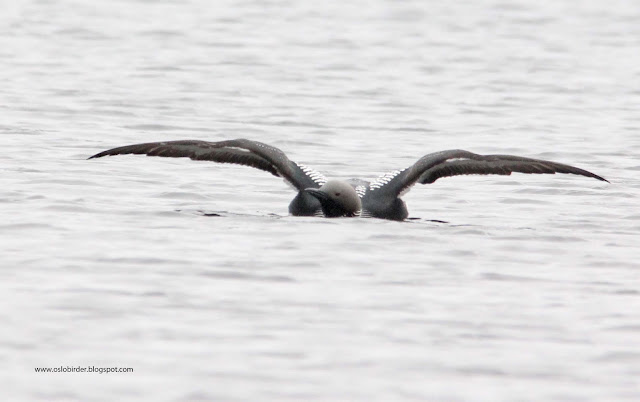 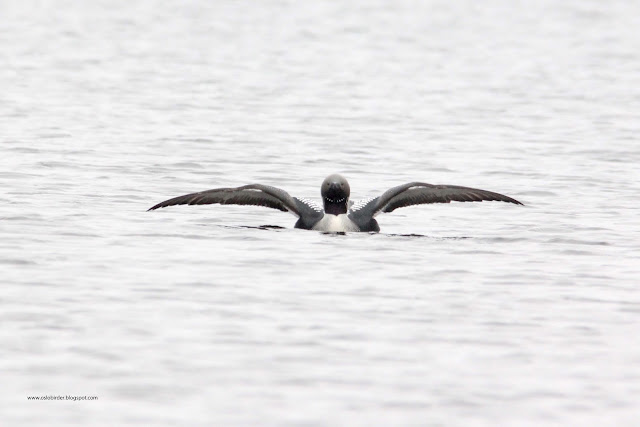 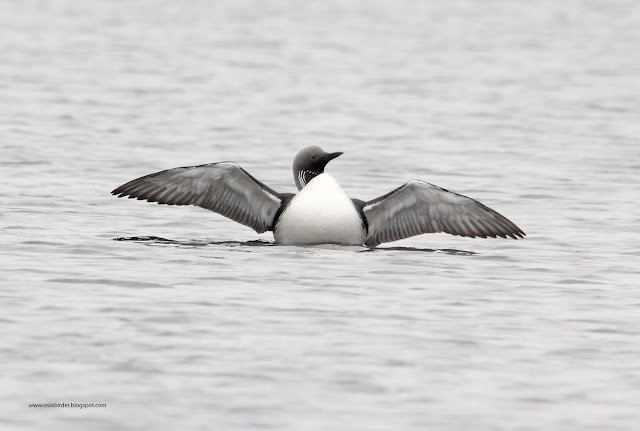 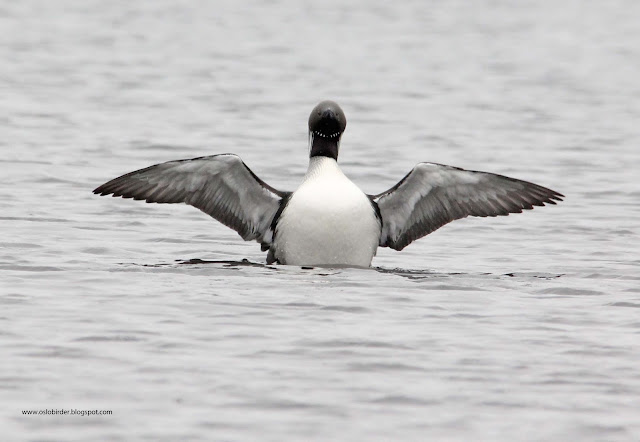 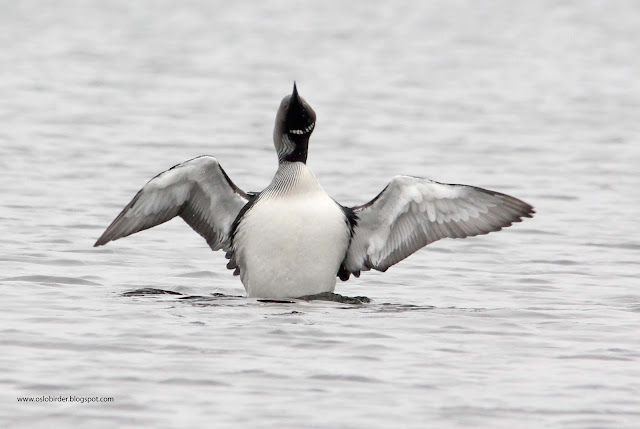 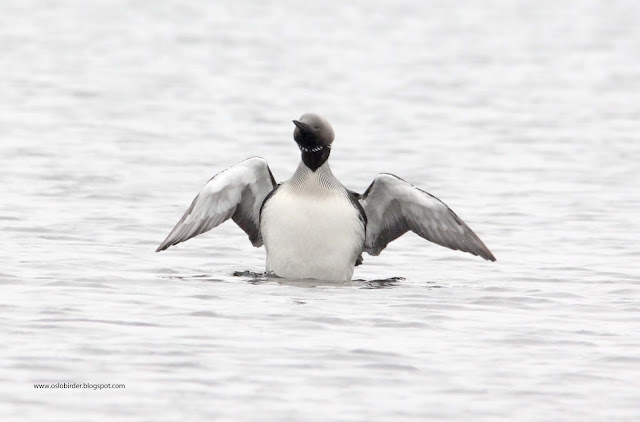 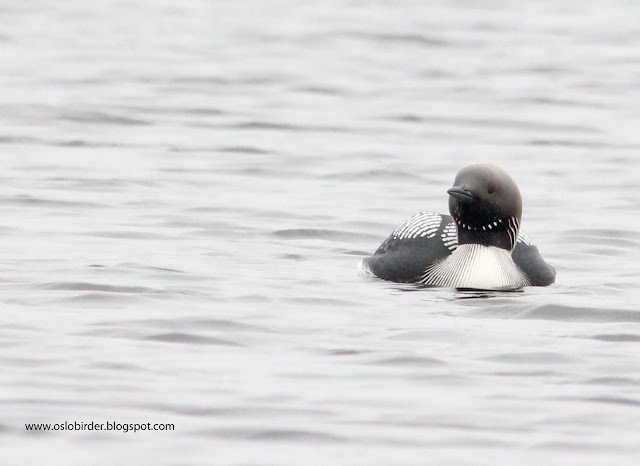 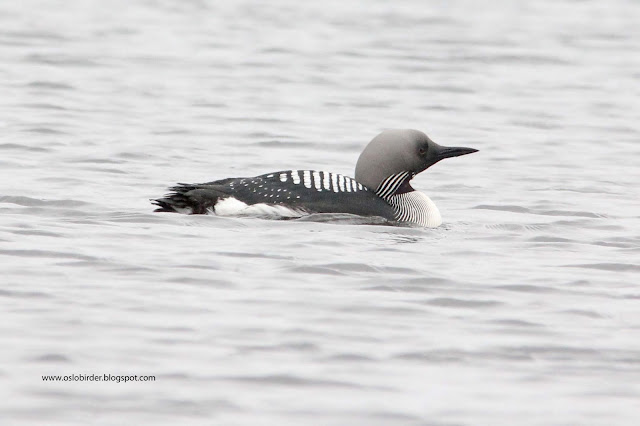 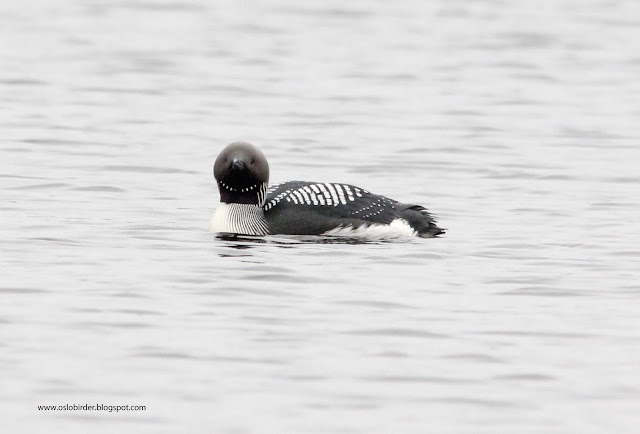 I decided to go raptor looking around Ski again today although with cloud I was never likely to see that much but it wasn’t a complete disappointment.

I had a pair of Marsh Harriers mating plus an additional male, female Hen Harrier (tried to string it into Pallid but the photos despite being crappy do show 5 fingers) and a Kestrel.

Most unusual bird of the day was a male hybrid dabbling duck who tail and speculum showed it to have Mallard as one parent and small size suggested Teal as the other but the plumage didn’t have any obvious Teal influence. This bird was clearly so strange that a Mute Swan kept chasing it away whilst ignoring Mallards and Teals in the same area.

After lunch I spent a productive couple of hours in Maridalen where a very tight flock of ca. 600 Pink-footed Geese were resting on the lake. A single Barnacle Goose amongst them was a very good candidate for a wild, Svalbard bird rather than the feral birds breeding around Oslo. I tried quite hard to string Bean and White-fronted Goose but gave up in the end (there is an enormous variety in bill marking, white around the bill and mantle colour amongst White-fronts). A minimum of 14 Black-throated Divers on the lake was a very high number and there were also two Red-throats. The sun shone through eventually and then suddenly there were raptors! I had three Kestrels, male Merlin, Osprey, 2 Sparrowhawks, a Buzzard and finally a migrating Rough-legged Buzzard.

Whilst we were having a return visit from winter around Oslo yesterday it was slightly better weather further south and two records of Pallid Harrier south of Oslo gave me hope that raptors may be on the move and with sun forecast today I had a hope they would make it closer to Oslo.

I chose to explore the area around Ski which is not normally on my itinerary but has areas of farmland and reed fringed lakes that may be attractive for raptors. The fact that I had eight species of raptor from the same spot in less than an hour of watching and had 9 species in total during the day shows that raptors were indeed moving. I should probably have spent a lot longer at my first stop but was keen to check out other sites including Nordre Øyeren but none of these were so productive.
My eight species were Marsh Harrier, Hen Harrier, Peregrine, Merlin, Kestrel, Sparrowhawk, Osprey and Buzzard and I added Goshawk later in the day. Rough-legged Buzzard was an obvious omission and no eagles or anything rarer but I was happy with my raptor tally.

I also had Marsh Harriers at a further two locations suggesting this species had become firmly established as a breeding species. A brief stop in Maridalen in the early afternoon revealed Osprey, Kestrel and migrating Cranes so things are starting to warm up.

I checked out Svellet but the water level is so low that there were no birds at all! The chances of good mudflats and shallow water in the middle of May must be quite high....(fingers crossed)

Still no Jack Snipe, Willow Warbler, Wheatear of swallows so lots to look forward to! 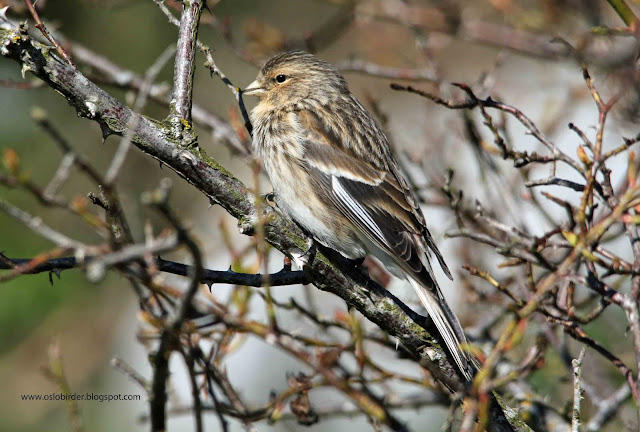 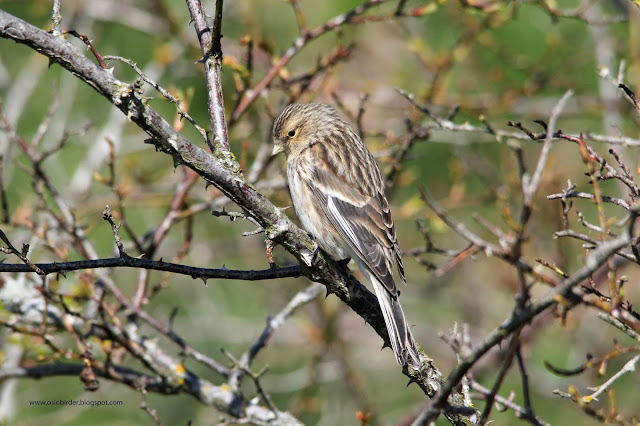 We awoke today to cold northerly winds and even more snow! This weather is clearly not conducive to new arrivals of migrants but it does mean that those that are here are likely to congregate where conditions are good and also that when the migrants do arrive that we might get a particularly large wave of birds.

Given that Maridalen is covered in snow I thought that Bygdøy would be worth a good check as there were clearly a lot of thrushes there yesterday. There were loads there today as well – Fieldfares made up 90% of the birds and there were at last 2500 of them!! Redwings were the next most numerous, then Song Thrushes, 13 Ring Ouzels, 4 Mistle Thrushes and just a couple of Blackbirds noted. A field that had been ploughed last autumn had me hoping I might find Shore Lark or something more interesting. I didn’t, but 9 Skylarks were a very unusual sight here and were very likely birds from Maridalen seeking refuge. There were also a few finches including Linnet and Twite as well as Meadow Pipits and White Wagtails.

I didn’t see or hear a single Chiffchaff today and many of these may have perished in the last two days. These cold snaps also show why the vast, vast majority of warblers do not turn up until May no matter how warm April can sometimes be because thousands of years of evolution has taught them that it ain’t safe to arrive early.

At Huk, I found nothing interesting on the fjord but two Ring Ouzels were in bushes right by the beach and after a while two Purple Sandpipers came into view. It is a long time since they have been reported but I am sure these are the same two birds that were here earlier in the year.

I thought a stop in Frognerpark might also reveal some birds looking for warmer climes. There wasn't anything exciting on the ponds but a Ring Ouzel among the Fieldfares was a definite sign of the times. 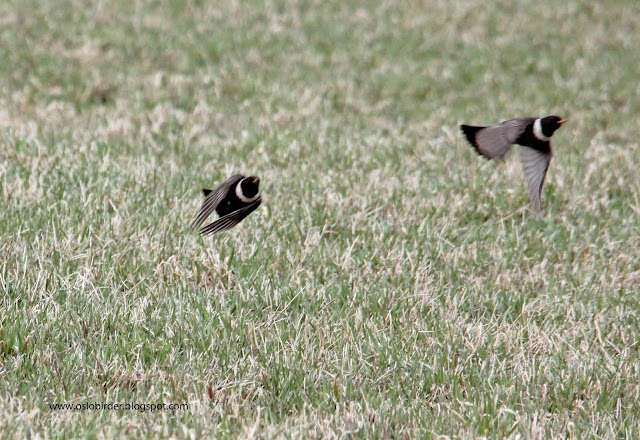 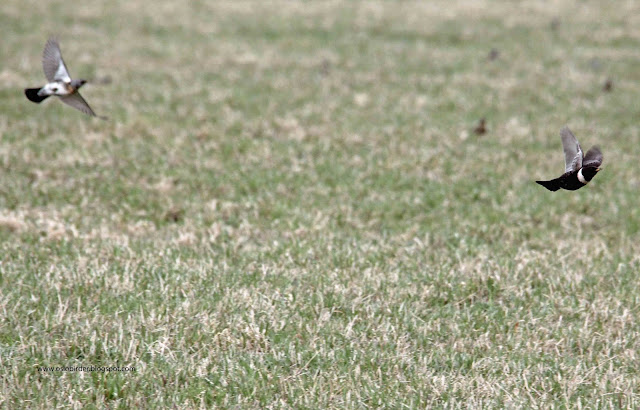 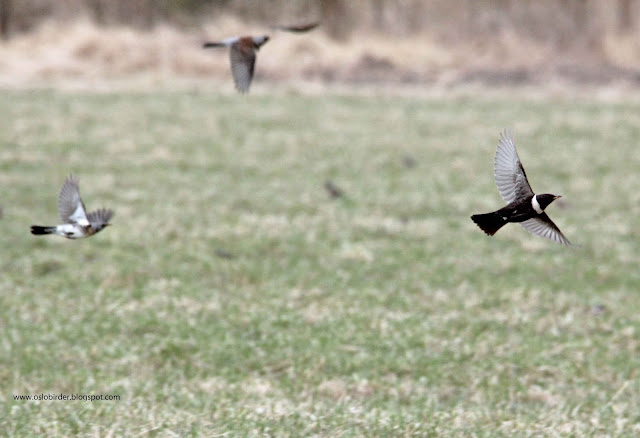 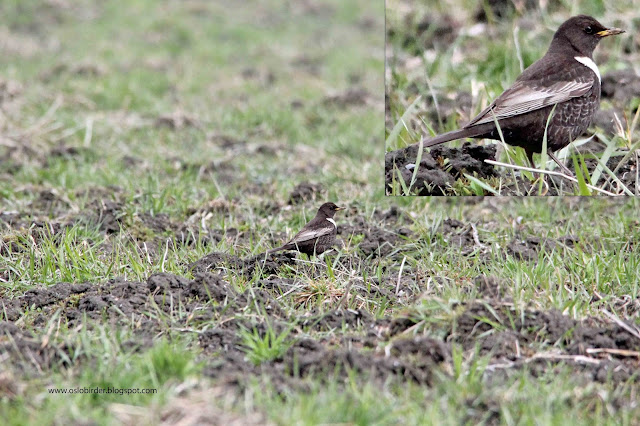 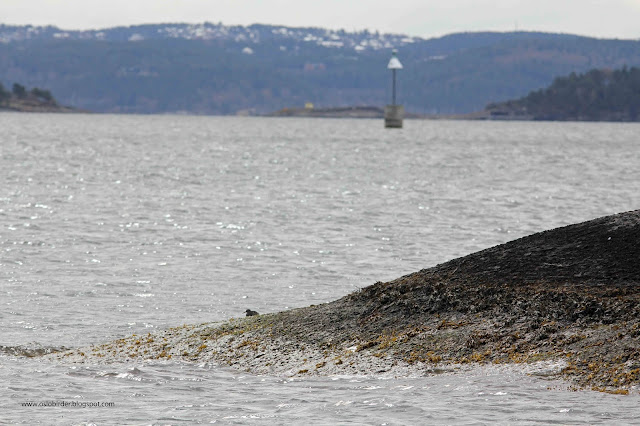