Migration seemed to really stop up today despite there being SW winds and a blue skies with scattered cloud. Per B and I were in Maridalen hoping maybe for some raptor migration but it wasn't happening today. In fact there was even less to see today than yesterday with the early migrants from yesterday now missing without a trace. A single Ring Ouzel (ringtrost) and drumming male Lesser Spotted Woodpecker (dvergspett) were scant recompense.

I decamped to Fornebu but had little here either and not even the sea could offer anything - I had hoped in vain that the wind would have blown in some terns at least.


The day was saved by a trip to Frognerparken where the Iceland Gull has become a regular attraction again. It is now in a paler, more faded 1st summer plumage and looks very pale. It is also sporting some bling, so the ringers eventually succeeded in getting their hands on the poor creature. With it being so pale I had big problems getting the right exposure on my pictures. 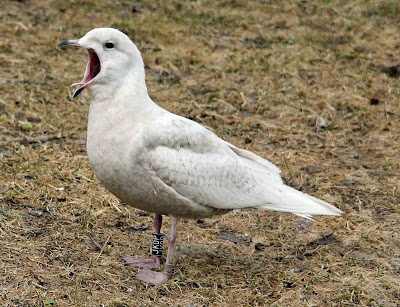 Here's a short video. I think the quality of my videos is improving although there is the usual camera shake in the middle but I bring it back on centre quite quickly I think!

Another pale gull could well be the one I have seen and photographed a couple of times during the winter but looks even pale now. I did not see it side by side with any other large gulls but it looked structurally similar to the Iceland Gull and could lead ones thoughts towards Kumleini.

Also here a pair of Oystercatchers (tjeld) that were feeding on the grass by the side of the lake were relatively unshy and a number of other common Oslo (summer) birds allowed themselves to be photographed.