Today was a local day: the Oslo Birder was Oslo Birding. Overnight snow and cold northerly winds meant that migration (what little there is) really ground to a halt today so I visited Maridalen, Bygdøy, Frognerpark and the fjord with low expectations although hoped I would get to see the Iceland Gull (grønlandsmåke) which is still occasionally being seen in Forgnerparken. Well I had no luck on that score but Black-headed Gulls (hettemåke) have really arrived in force all over the city and they are hungry with 100+ at Frognerpark fighting over every scrap of bread I threw out. I spent some time trying to read colour rings and managed 6 rings with four being Norwegian, 1 Danish and 1 Dutch.


In addition I had two birds (J2LA and J2CY) both ringed in Oslo and only resighted in Oslo.

One of the gulls had the most intense pink flush I have ever seen although the pictures don’t truly convey the right colour. I have seen pink flushes before on Black-headed and Common Gulls but never anything like this which is approaching what I would expect a Ross’s Gull (rosenmåke) to look like.

I spent some time trying to take flight photos of the Black-head. After taking about 250 pictures there were a couple of acceptable ones (aren’t digital cameras great?). After discovering that the autofocus just couldn’t keep up when the birds were so close I switched to manual focus and fixed the focus on a point about 10 metres and just fired off loads of pictures when the birds flew through my zone. I’m sure this is also how the pros do it! 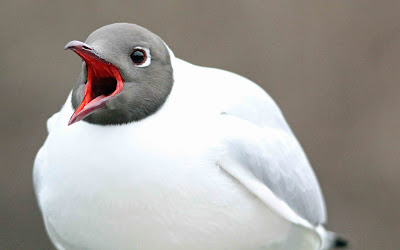 At Kongshavn in the fjord I had my first Grey Wagtail (vintererle) of the year feeding where a stream enters the fjord and Østensjøvannet had a number of new Coots (sothøne) and geese. One pair of Canada Geese was sitting on nest despite the lake still being frozen! Maridalen was very dead due to the weather except for an Osprey (fiskeørn) which was flying over the small area of open water at Hammeren as I drove in but when I stopped the car to look had disappeared! On Bygdøy the fields at Hengsenga held a number of Greylag Geese but I found nothing rarer amongst them.

Finally, todays gull question. These two Lesser Black-backed Gulls photographed at Frognerparken both appear to be in adult plumage but note how the second one has much smaller white tips to the primaries. Is this just individual variation or is the second bird not fully adult even though there are no other signs of immaturity. The white tips do wear off but April is a bit early for wear. Lesser Black-backed Gulls attain adult plumage much faster than the other large white headed gulls and are already basically adult in their 3rd (4cy) summer whereas Herring Gull take until their 5th summer (6cy).