Strong southerly winds had me sea gazing from Brentetangen again this morning. The big movement didn't happen today either but I was kept busy for two hours before deciding to move onto Kurefjorden. There were some seabirds to see with 3 Kittiwakes (krykkje), 3+ Gannets (havsule) and single Common (Makrellterne) and Arctic Terns (rødnebbterne) the highlights. Only one raptor today - a Peregrine (vandrefalk), whose presence I was alerted to by alarm calling passerines behind me, which then flew over my head and hovered in the wind a few hundred metres offshore where it plucked and ate a small bird it had caught.
On my way to Kurefjorden i heard my first singing Wryneck (vandrefalk) of the year which is relatively early. In Rosnesbukta a low tide and wind right in the face made viewing difficult with two Bar-talied Godwits (lappspove) the best birds and very few ducks. I had been hoping to refind the Green-winged Teal (amerikakrikkand) to give it a good grilling but there were only 12 Teal (krikkand) in the bay. Moving onto Ovnbukta though there was a flock of 290 Teal but after going through them four or five times I felt confident it was no longer here. Nearby a pair of Shoveler (skjeand) were feeding on a flooded field.
With the day still young I decided to head for the wetlands of inner Østfold and Akershus. Although there is still a lot of ice on the inland lakes it is starting to melt on the edges and there are birds to find. At Hærsetsjøen and Kallaksjøen I had a male and female Marsh Harrier (sivhauk) and moving into Akershus I had a fine male Hen Harrier (myrhauk) by Hemnessjøvannet and six hours later it is still a hen Harrier ;-)
At Hellesjøvannet I had a male Marsh Harrier just to the south of the lake and at the lake a pair were over the reedbeds with the female seemingly searching for a nest site.
Around Bjørkelangen the floodwaters have receeded a bit and I had the first Greenshank (gluttsnipe) of the year for Akershus. There were still lots of Teal at Kjelle but a bit too distant to grill for something rarer and there also 30 odd Cranes (trane) in the area
Passerines were a bit thin on the ground today with fewer thrush and finch flocks but I did have my first Tree Pipits (trepiplerke) of the year migrating over Brentetangen.

Whilst I was "doing" Østfold today Per B was in Maridalen from before dawn with a fine male Marsh Harrier as his reward. Others had a singing Grey-headed Woodpecker (gråspett) so it looks like it is still around and maybe will give itself up for me soon.

I really struggled to take any decent pictures today but here at least are some images of birds seen by me on this day: 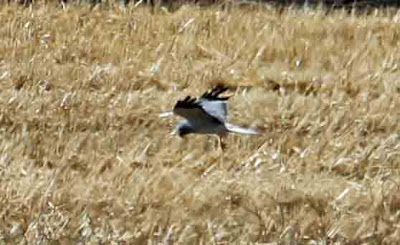